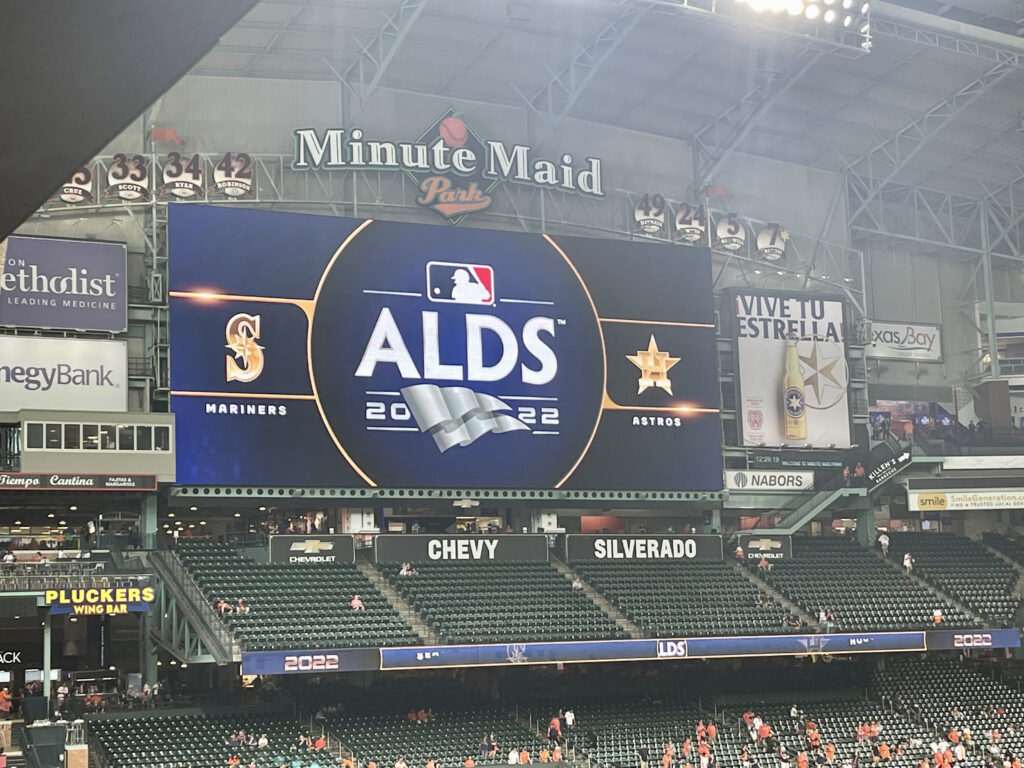 Enduring to the End

I took this past Tuesday off and went to the first game of the ALDS as the Houston Astros faced the Seattle Mariners. I went downtown early for street fair and spent considerable time walking around Minute Maid seeking the right angle for pictures of the MLB postseason logo. There was great excitement in the air, but then the game started.

The game largely was miserable. Justin Verlander was struggling (I sent a picture of his ERA to a good friend during the game, and his number stood at 27.00!!), and the Astros offense seemed to have gone on vacation. There was a Mariners fan in a couple of rows in front of me who became more and more obnoxious the more alcohol he consumed; he would stand up, point at us Astros fans, and laugh when a play didn’t go quite right.

I thought more than once that I might as well go home, the game was over, and there wasn’t any reason to prolong the agony. After the top of the eighth inning, the Astros were trailing the Mariners 7-3. That was enough for me; I decided it was time to leave. However, I glance at my watch and saw that it was 5:00—I could either sit and watch the Astros or fight Houston rush hour. I chose just to stay put and finish the game.

Well, as far as sports goes, that was the best decision I ever made. The Astros got two runs in the bottom of the eighth. In the bottom of the ninth inning, with two outs and two runners on base, Yordan Álvarez came out to the plate and hit a home run. Minute Maid went wild. People around me—folks whom I had never seen before in my life—started hugging me and giving me high-fives. Even as staff were gently pushing the crowd to the exits, people wanted to stay and revel in the amazing come-from-behind victory.

I was more than discouraged during the Astros game, but in the end the game turned out the way I had hoped. There’s never that promise about a game—even great teams like the Astros or the University of Kentucky Wildcats occasionally lose games. But Jesus will always win: “They [Roman kings] will make war on the Lamb, and the Lamb will conquer them, for he is Lord of lords and King of kings, and those with him are called and chosen and faithful” (Rev 17:14).

Life often gets discouraging. Life often looks like you’re going to be defeated. But the one who endures and trusts in the Lord will win in the end; that’s precisely what Jesus said—“The one who endures to the end will be saved” (Matt 10:22). The Astros, the Aggies, and even the Wildcats may not win every game, but with Jesus as Lord, you can win at what is truly important—heaven. Endure to the end. Stay put. Keep on keeping on. The reward will be beyond your wildest imagination.

One thought on “Enduring the to the End”