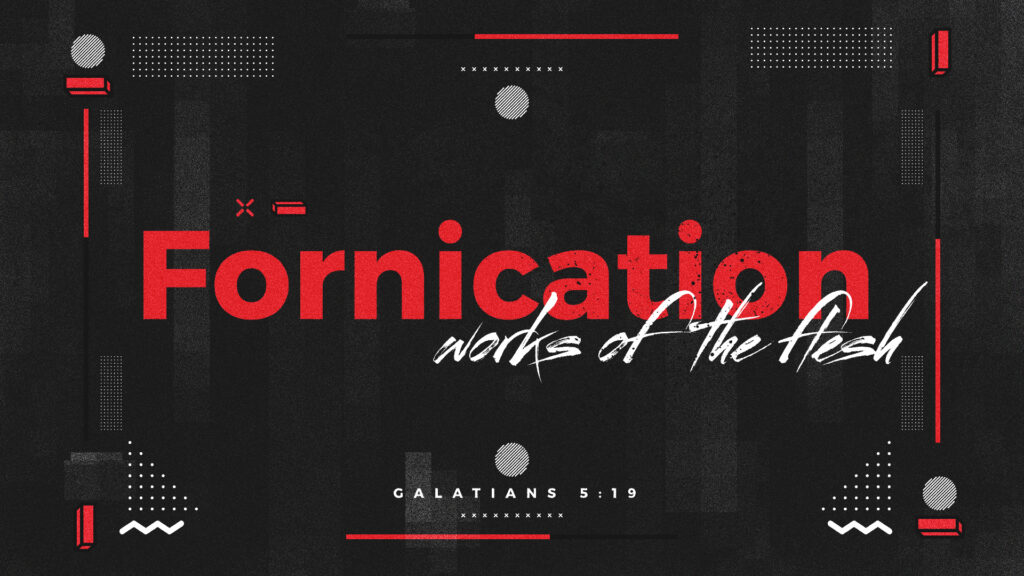 Fornication (Works of the Flesh)

The first work of the flesh Paul mentions is “sexual immorality” according to the New International Version. The Greek term is porneia (fornication). The noun comes from the cognate pornē (prostitute). This is where the term pornography originates: pornē—prostitute; graphē—writing. Pornography literally is writing about prostitutes.

In the New Testament, porneia is a broad term which describes a great variety of sexual sins. Adultery, for example, is a narrow term—a sexual relationship where at least one of the partners is married to someone else. Fornication would cover adultery, but it would also cover any sexual sin.

Do you believe fornication is a problem in our society?

Why might fornication be a problem in today’s world?

Notice the way porneia (fornication) is used in the New Testament.

John 8:41—the Jews tell Jesus that they were “not illegitimate children” (NIV). Literally: “Children of fornication.” The idea is that they were not born out of an immoral, pre-marital sexual relationship. Although these are “uninspired words” (i.e., words of uninspired men), this statement does show how “fornication” was used among first-century Jews.

As we think about fornication and adultery, it should be noted that adultery is not the one exception Jesus gave for divorce. Matthew 19:9. I believe that’s significant, for fornication is a “lesser” qualification.

Adultery is intercourse; fornication is any sexual sin. Some people also ask about pornography vis-à-vis Jesus’s statement on marriage and divorce. Jesus said that lusting after a woman is adultery in the heart (Matt 5:27-28); the requirement for divorce is fornication. The Greek words are completely different. Pornography use—while clearly a sin and clearly a problem—is not grounds for divorce.

At the Jerusalem Conference, James urges the apostles and elders to write the Gentile brethren and tell them to abstain from food polluted by idols, sexual immorality, meat of strangled animals, and blood (Acts 15:20). The church did so (Acts 15:29; 21:25).

A man in Corinth was committing incest—referred to as fornication (1 Cor 5:1-5).

Fornicators (pornos—cognate of porneia) will not inherit the kingdom of God (1 Cor 6:9).

The one who commits fornication sins against his own body, for the Holy Spirit dwells in him (1 Cor 6:18-20). How is sexual immorality a sin against our own body?

Marriage is a remedy against temptation for fornication (1 Cor 7:1-5).

Fornication is not to be mentioned among God’s people, for it is unbecoming the people of God (Eph 5:3).

The Christian is to put fornication to death (Col 3:5).

The will of God for our sanctification is that we abstain from fornication (1 Thess 4:3).