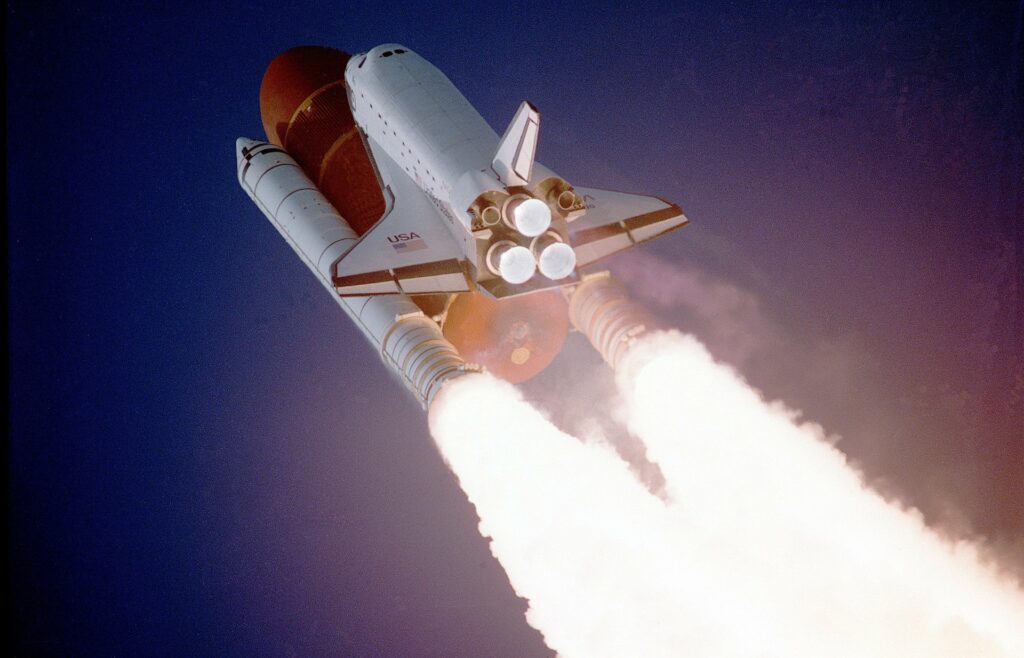 I vividly recall sleeping in what we boys called “Aunt Thelma’s room” at Mamaw and Papaw’s on April 12, 1981. Dad tiptoed in the room as not to wake my sleeping brothers and told me it was time to get up and come to the TV. Walter Cronkite was on live from Cape Canaveral where Columbia, the first orbiter of the Space Shuttle fleet, was preparing to make her maiden voyage. Before church that Sunday, I watched on that television screen as Columbia burst through earth’s atmosphere to enter orbit.

Dad didn’t know it on that day, but I was addicted to manned space flight. Throughout the rest of my childhood, if a shuttle was going to be launched, I was in front of the television. If a shuttle was landing, I was in front of the television. I recall vividly that horrific day — January 28, 1986 — when America lost its first astronauts in space flight in the Challenger explosion. But, even on that day, I wanted to be an astronaut. I wanted to explore, and I wanted to see the earth from space.

You cannot get to space without talented rocket scientists. The funny thing is that I had never met a rocket scientists until I moved to Virginia. I’ve met a man who worked diligently to help get Apollo 13 safely back to earth (Remember in the movie when the parts are poured on the table so engineers could figure out how to make the Command Module’s carbon dioxide scrubbers fit the Lunar Module? This gentleman was at that table). One of our elders is married to a lady whose father worked at the Marshall Space Flight Center in Huntsville, Alabama.

Rocket science wasn’t in my cards, however. My math skills are quite poor, and, I just can’t count on them (sorry for the pun). I did fair in some science, but when it came to chemistry and the higher sciences, again, I just wasn’t very good. I wanted to be a pilot, but have you read this blog? Do you think I could ever pass a physical? I would love to journey into space, and I’ve love to look out my window and see the earth hundreds of miles below.

Nope, I’m not a rocket scientist, but sometimes you don’t really need to be much of a rocket scientist. My neurologist is a brilliant man, and he took one look at me and diagnosed my problem as dystonia. The treatment options are somewhat limited: We tried one medication that worked for about a year but caused horrible side effects, we’re seeking to get my insurance to pre-authorize genetic testing (otherwise, it would cost $5,000), we’re going to try Botox injections next month, and if everything else fails, the only real option is Deep Brain Stimulation (DBS).

There’s a problem with DBS, however. It never comes with a guarantee, so says my neuro (when you have a chronic health issue, you learn shortened lingo in a hurry), and he has even less confidence than usual that it would work in my scenario. Last week, he said the odds of a successful surgery are, in his own words, “a flip of the coin.” It’s likely that we’ll not know whether or not the surgery has been successful until several months after the implantation of the device. As the doctor was saying all of this, I’m wanting to throw my hands up in defeat. I think he saw that defeat and recommended that we try Botox; that may or may not work, but having some needles placed in your legs to inject a toxin is less frightening than having your head opened (while you’re awake) and having at least one lead placed deep into the brain. If the surgeon is off by a millimeter, we’ll have a problem. The idea of DBS surgery frightens me deeply.

But, it’s not rocket science. I’m doing it. My wife let me make the decision myself and said almost nothing during my deliberations (she has wanted me to try DBS from day one), and I appreciate that. I have prayed and thought about this decision, and it’s mine and mine alone. When I see Dr. Ferrara in November for my Botox, I’m going to tell him to schedule surgery.

Your prayers on this journey are most appreciated. But, you see, I know God will walk with me, for he has walked with me.