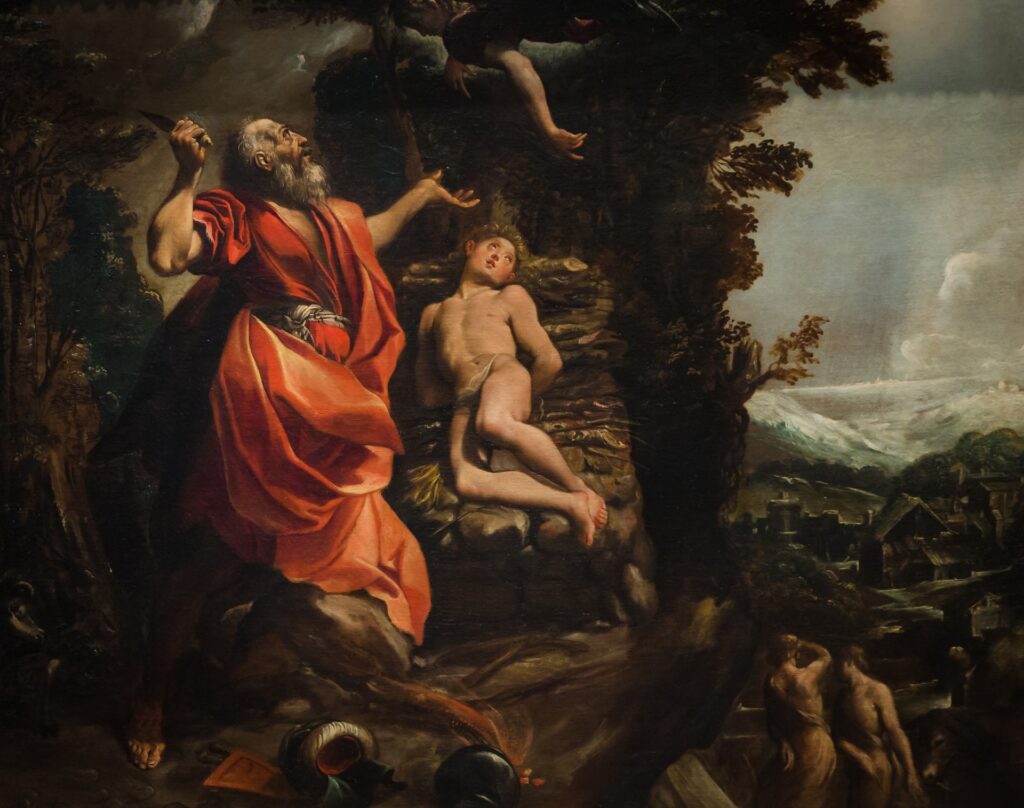 The point is that Abraham is a very “mixed” person spiritually. I think we all experience those highs and lows, if we’re honest about it. God is going to put Abraham to the test, and Abraham will rise to the occasion. This is not the first time that Abraham has risen to the occasion (Rom 4:20-21). But this seems to be the last time that there is any doubt of Abraham’s faith and faithfulness to God.

What led to Abraham’s strong faith? How do we grow in faith?

Scholars have suggested different ideas about why God commanded Abraham to sacrifice his son. It’s always a precarious endeavor to attempt to explain why God does a certain thing. God is God, and we are not! “‘My thoughts are not your thoughts, Nor are your ways My ways,’ says the Lord” (Is 55:8). Yet, we might learn something by thinking about possible reasons God might have acted in this manner.

Some reasons God might have required Abraham to sacrifice Isaac:

Some believe that this is a polemic against child sacrifice.

Some think the primary purpose of this episode is to teach us the importance of obedience to God.

There is no doubt that obedience to God regardless of circumstances is an important theme in this passage. In fact, I have at least two sermons on obeying God from this passage.

The primary purpose of this text seems to be to teach Abraham faith in God’s promises and long-range purposes. “By faith Abraham, when he was tested, offered up Isaac, and he who had received the promises offered up his only begotten son, of whom it was said, ‘In Isaac your seed shall be called,’ concluding that God was able to raise him up, even from the dead, from which he also received him in a figurative sense” (Heb 11:17-19). “Abraham had to cut himself off from his entire past when he left his homeland and now is summoned to give up his entire future. The testing goes to the heart of his life, his hope for meaning, and his trust in Yawheh” (Marks, “Book of Genesis,” p 18, quoted in John T. Willis, Genesis, p 291).

The Hebrew phrase lek leka acts as a pair of bookends to Abraham’s story. It occurs in 12:1 where God commands Abraham to “Go from. . . .” It appears again in 22:2 where God commanded Abraham to “Go to. . . .” The phrase occurs nowhere else in the Old Testament. That is fairly good evidence that the author of Genesis intends this to serve as a frame around this story.

I’m convinced that God continues to test His people. We know that He tested Israel. “You shall remember that the Lord your God led you all the way these forty years in the wilderness, to humble you and test you, to know what was in your heart, whether you would keep His commandments or not” (Deut 8:2). “They were left, that He might test Israel by them, to know whether they would obey the commandments of the Lord, which He had commanded their fathers by the hand of Moses” (Judg 3:4).

Many newcomers might come to this text and wonder, “Will Isaac survive?” The right question is, “Will Abraham obey?” Even in the worst circumstances, life is never more valuable than obedience to God.

What are some ways that God has tested you? What have you learned from these tests?

At verse 2, God makes clear the enormity of what He is asking Abraham to do. “Take now your son, your only son Isaac, whom you love.” This acts as a crescendo to make clear what God is asking Abraham to do. There is going to be no mistaking the command of God. The command is to take Isaac, the son of Abraham’s love and the son of promise, and sacrifice him as a burnt offering to the Lord.

Obviously, Isaac is not Abraham’s only son. He had a son by Hagar (Gen 16:15) and six by Keturah (Gen 25:2-4). The sons born through Keturah had not yet been born. How was Isaac Abraham’s only son? How could Abraham take his only son and sacrifice him before the Lord?

The death of a child must be a horrific experience. But, imagine if the death of the son was at your hands! Isaac’s death would be no accident, but it would be obedience to the command of God!

Has God not already demanded enough of Abraham? Why would God demand so much?

Abraham rose early in the morning and began the journey. Jerusalem would have been about a two- or three-day journey from Beersheba, where Abraham is staying (Gen 21:33-34). That might be considered evidence for seeing the future Temple Mount as the place where this event took place. I, however, remain unconvinced that this took place there.

Moses make clear that there is no delay in Abraham’s obeying the command of God. Why would Abraham not delay in obeying God? Are there times that we ought to delay obeying God? Why or why not?

Moses does not discuss Abraham’s emotional state as he carries out God’s command. There are several likely reasons for this:

The text is emotionally charged as is. How would you feel if you were called upon to sacrifice a son for whom you had waited for a number of years?

At verse 4, we are told that on the third day Abraham lifted his eyes and saw the place where he was to sacrifice his son. The reality of what he is about to do becomes even more concrete. At this point, the narrative slows down a bit. The purpose seems to be to demonstrate the enormity of what Abraham is about to do.

There are many questions I’d like answered about this narrative. How old was Isaac? At what point did Isaac understand what was about to happen? How willingly did Isaac allow himself to be bound? Abraham wasn’t simply to stab his son and then burn him. The idea would be to disembowel Isaac while he is still alive and then burn him.

What was Sarah told? She had to wonder what Isaac and Abraham were doing. Was she ever told of God’s command? If so, when?

Abraham told his young men to stay put and that he and the “lad” would go worship and come back (v 5). This does seem to demonstrate that Abraham understood worship to be an “event.” Worship is not a lifestyle as some have asserted.

Because worship is an “event,” there are activities which define worship. That says that there needs to be a different decorum when I worship. Ballgame vs worship. Kitchen vs worship.

The fact that Abraham says that he and the “lad” would come back says a great deal about Abraham’s faith. It seems to me that Abraham fully expected to slay his son. He, after all, took the knife to slay his son (v 10); only divine intervention prevented the killing of Isaac.

Hebrews 11:17-19. The author of Hebrews, under the guidance of the Spirit, informs us something about Abraham’s thinking. Abraham concluded that God was able to raise Isaac from the dead. Could God have raised Isaac from the dead? How do we know?

This seems to teach something about faith. Faith is believing in God’s faithfulness in spite of evidence to the contrary. I am not saying that faith is a leap in the dark. Faith is far from a leap in the dark or wishful thinking (Rom 10:17; Heb 11:1).

However, when prayers aren’t answered the way we wish, when things happen we don’t understand, we still need a firm faith in God. “When a train goes through a tunnel and it gets dark, you don’t throw away the ticket and jump off. You sit still and trust the engineer” ~~ Corrie Ten Boom How do we trust God when things don’t make sense?

How can we have confidence that God will provide for us?

Abraham bound Isaac and laid him on the altar. Are we to think that Isaac was so dense that he had no idea what was about to take place? What do you think went through Isaac’s heart? Why would he willingly allow himself to be bound and killed? Might there be lessons in trusting others in Isaac’s example? How do we learn to trust others? Might there be lessons in being people worthy of trust in Abraham’s example? How do we become trustworthy people?

Abraham lifts up his eyes and sees a ram. There will be a sacrifice this day, but it will not be Abraham’s only son. The sacrifice is substitutionary.

Jesus: “Your father Abraham rejoiced to see My day, and he saw it and was glad” (Jn 8:56). Could it be that Abraham saw Jesus’ day on this mountain on this day? What parallels between the Isaac narrative and Jesus’ sacrifice do you see?

God promises to bless Abraham. God swears by Himself, for there is no one greater by whom He can swear. “When God made a promise to Abraham, because He could swear by no one greater, He swore by Himself” (Heb 6:13).

It seems that we see a clear connection between obedience and God’s blessing. Does God still reward obedience? How does He do so?

What do you think the reunion between Isaac and Sarah was like? It probably depends upon how much Sarah knew.