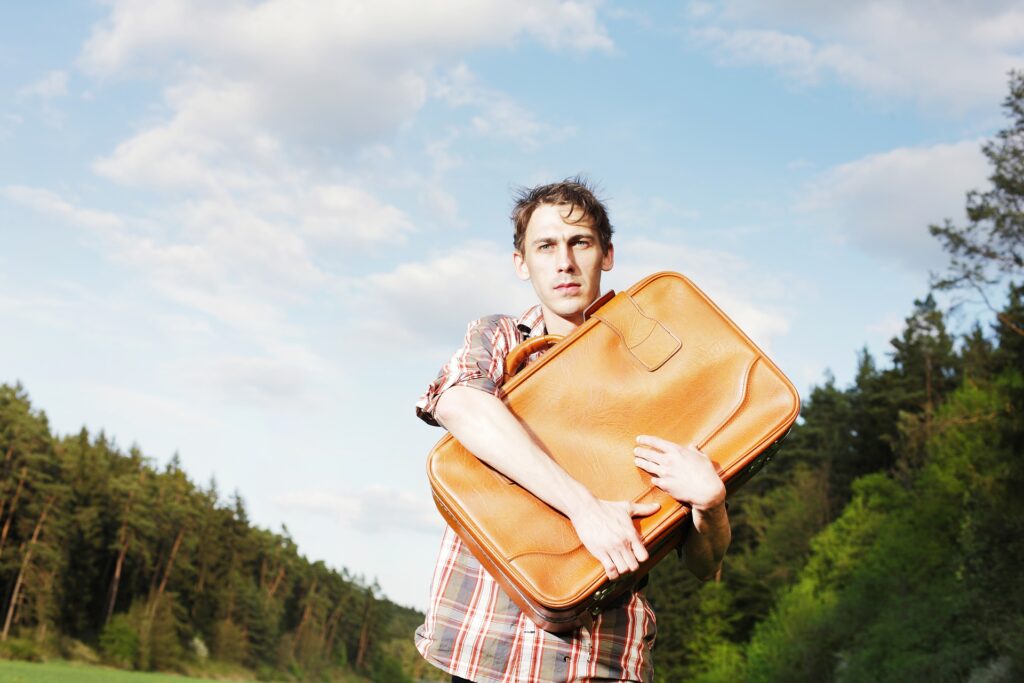 In Genesis 13, we learn how that Abram went back to Canaan after Egypt. Lot, who was introduced back in 11:27 as Abram’s nephew, becomes a major player here.

The primary purpose of this chapter isn’t necessarily to teach conflict resolution. Admittedly, this chapter says much about conflict resolution. The main purpose of the chapter is to show how God fulfills His promises to His people. God is going to give Abram the land of Canaan, and this episode shows how God is able to do that. This episode also sets the stage for what we learn about Sodom and Gomorrah.

There has been a great famine in the Negev, but Abram and his household apparently have no choice but to return. Ladies, how would you feel if your husband lied about who you are and then led you into a place where there wasn’t enough to eat?

We remember Sarai as a woman who struggled with her faith. She laughed when God said she would conceive, and she convinced Abram to conceive with Hagar. Yet, she had to have some faith in God and/or in Abram; otherwise, I think she would have gone mad. The episode with Abram’s lying seems as though it would have been a major obstacle to believing in Abram.

Abram was very rich in livestock, in silver, and in gold (v 2). Presumably, he received many of these riches from Pharaoh (Gen 12:16).

His riches seem to be a blessing and a curse.

The problems of Abram’s riches:

The blessings of Abram’s riches:

What steps can we take to minimize the dangers of riches?

What steps can we take to maximize the blessings of riches?

At verse 3, Abram is seen as a wanderer. New International Version: “From the Negev (or “South”) he went from place to place until he came to Bethel.” The interesting thing, of course, is that Abram is wandering as the Israelites will do in the wilderness. Abram’s wandering is seen in the New Testament as an indication of his faith. “By faith he dwelt in the land of promise as in a foreign country, dwelling in tents with Isaac and Jacob, the heirs with him of the same promise; for he waited for the city which has foundations, whose builder and maker is God” (Heb 11:9-10). Hebrews 11:13-16.

Abram ended up at Bethel (literally, “house of God”) to the place where he had first made an altar, and he called on the name of the Lord. Genesis 12:8. Abram seems to be repenting for his sin in Egypt. At the very least, this can be seen as a pledge on Abram’s part to be more faithful. Are there times in our lives that we need to pledge to be more faithful? How do we make such pledges? How do we carry out such pledges?

Abram goes back to a place where he had previously worshiped God—it seems that memory is helping him to refocus his life. What spiritual role can memory play in our lives? What memories can help us refocus our lives?

Abram’s faith in God is about to be tested in the narrative about Lot.

It’s interesting to me that we read of Abram’s rededication sandwiched between two texts which demonstrate his sinfulness. He lies to Pharaoh about Sarai. We’re reminded in the narrative about Abram’s and Lot’s herdsmen that Abram took Lot with him contra God’s instructions.

If we’re honest, life is very much like that. We’ll do well for a while, sin, rededicate ourselves, and either sin or have a reminder of sin. What steps might we take, however, to lessen the sin in our lives?

What we read here about Abram and Lot is quite similar to what we read about Esau and Jacob (Gen 36:6-7). That seems to tell us that it was common for herdsmen to have difficulty living in close proximity to other herdsmen. That is just another indication that we’re dealing with real people with real issues in this text. It was common for nomads like Abram and Lot to seek for harvested field on which they could allow their flocks to graze in the summer.

This is the first time we’re told anything about Lot other than the fact that he is Abram’s nephew. We learn that he is rich with “flocks and herds and tents” (v 5). However, gold and silver are not mentioned as in the case of Abram. Lot likely is rich because of his relationship with Abram.

The mention of the Canaanites and the Perizzites (v 7) demonstrates that Abram and Lots are not alone in this place.

There was strife between Abram’s herdsmen and Lot’s herdsmen. It’s interesting to notice that there is no strife mentioned between Abram and Lot themselves. However, strife has a way of spilling over and affecting others.

A very different Abram appears here than appeared in the narrative where he went down to Egypt. Instead of attempting to be manipulative, he stands back and allows Lot to choose the best land. It certainly appears that Abram trusted God to take care of him regardless of how watered and fertile the land was. Should we expect God to take care of us when it comes to material things? How do we learn to trust God?

It’s possible that Abram and Lot stood at Burj-Beitin. The elevation there would have provided a magnificent view of the Jordan Valley. Abram is facing east (vv 10-11) and encouraged his nephew to look north (“the left hand”) and south (“the right hand”) and choose a land to call his own. If you notice Abram’s words carefully, it seems that he intended for the two of them to partition the land of Canaan between them. Lot, however, had other ideas.

Abram steps forward to be a mediator and a peacemaker.

Abram humbly allows Lot to choose for himself what land to take. What lesson(s) might we learn from Abram here? What might Abram teach us about solving conflict?

It is now generally believed that the ancient cities of Sodom, Gomorrah, and Zoar lie beneath the waters of the Dead Sea on the eastern side of its southern portion. At one time this region was not covered with water but came to be by certain changes in the earth’s surface. This would explain how the five kings of Mesopotamia could fight against the five kings of this region “in the Valley of Siddom (that is, the Salt Sea)” (Gen 14:3). Therefore, the Jordan Valley encompasses the Dead Sea.

Then, as well as now, common courtesy would have been for Lot to allow his uncle to choose first. Are manners really that important? What trouble does Lot get in because he simply fails at common courtesy?

Lot lifted his eyes. He did not look to the north and south as his uncle had suggested. He looked straight ahead to the east. Lot immediately knew that this was the choice land, because it was not dependent upon seasonal rainfall. The author even goes out of his way to compare this land to Eden, “the garden of the Lord.” Any illusions of this as paradise are shattered, for this beautiful land is also the location of Sodom and Gomorrah.

Lot settled near Sodom. This meant that Lot was leaving the land of Canaan, the land of blessing and promise.

The most significant thing about this is that we are told Lot “journeyed east.” Moving east in Genesis is a sign that one is moving away from God.

Regardless of his knowledge, his motives are selfish and put his family in great spiritual peril. His family suffered greatly: He lost his wife (19:26); and his two daughters fathered two nations, the Moabites (this would make Jesus a descendant of Lot through Ruth, Ruth 1:4 and Matt 1:5) and the Ammonites with their father (10:30-38).

Do we sometimes make spiritual decisions that could negatively affect our families? Why do we make those decisions? How can we keep from making spiritually bankrupt decisions?

John Calvin: “Lot, when he fancied that he was dwelling in paradise, was nearly plunged into the depths of hell.”

The author here makes a sharp distinction between the consequences of Lot’s choice and the results of Abram’s trust. That is clear from two statements: “Lot lifted his eyes and saw” (v 10); and YHWH’s instruction to Abram: “Lift your eyes now and look from the place where you are—northward, southward, eastward, and westward” (v 14). Lot made a selfish choice of land, and it led to the corruption of his posterity. Abram graciously accepted what was left and God blessed him richly.

The land promise had previously been very general. “A land that I will show you” (12:1). Now it is specified: “All the land which you see I give to you and your descendants forever” (v 15). “Descendants” is literally “seed.”

God promised to give Abraham and his “seed” the land “forever.” “Forever” obviously does not mean:

God tells Abram to traverse the land (v 17). This was part of an Ancient Near East custom about legally owning land. A new king would often tour his country after his coronation as a way of establishing his rule. “Every place that the sole of your foot will tread upon I have given you, as I said to Moses” (Josh 1:3; cf. Deut 11:24). In Ruth 4:7, Boaz sealed a real estate transaction with the exchange of sandals, reflecting this idea. Thus, when God tells Abram to traverse the land, He is telling the patriarch that all of the land would one day legally belong to his heirs.

Abram relocates to Hebron (v 18). This was a large settlement located halfway between Jerusalem and Beersheba. The area was very fertile (Num 13:23). That’s undoubtedly the reason for the famous grove of oaks that grew here. In the days of Josephus, there was an oak tree in Mamre that was said to have existed from the Creation.

Abram builds at altar at Hebron and rededicates himself to the Lord.