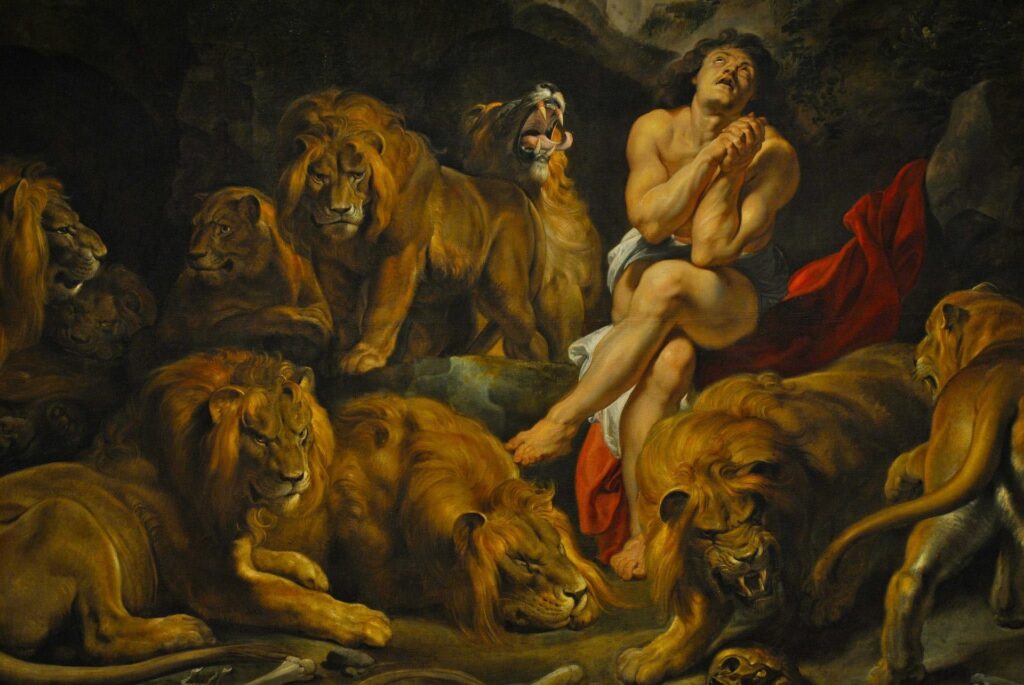 As we mentioned last week, Daniel is a wonderful example of faith in this narrative. Daniel requested from the king that he might be given time and then reveal the matter to the king.

We know that God is going to reveal the dream to Daniel, that Daniel to be promoted in the kingdom, but does Daniel know any of that? We were previously told: “Daniel had understanding in all visions and dreams” (1:17).

But, when did Daniel know that he “had understanding in all visions and dreams?” However we reckon the time from Daniel 1 and Jeremiah 25, using both Jewish and Babylonian dating methods, it is certainly possible-even quite likely-that Daniel interpreted this dream before the end of his training period. Did God give Daniel a vision to allow him to know that he had understanding in visions and dreams? Interestingly, none of the visions in the second part of the book-chapters 7-12-come from the reign of Nebuchadnezzar.

It is quite evident-regardless of how much Daniel knew about his God-given abilities-there was absolute faith and dependence on God at this point.

That absolute faith and dependence become quite evident as Daniel asked Hananiah, Mishael, and Azariah to pray concerning the vision. Why pray to ask God to do something I can already do? E.g., Why ask God to help me write a sermon for this morning when I already have one written? Daniel doesn’t know the dream Nebuchadnezzar had and he asked his companions to pray that he might receive the dream and its interpretation.

There are important lessons for us here:

We must have dependence upon God.

“By faith Noah, being warned by God concerning events as yet unseen, in reverent fear constructed an ark for the saving of his household. By this he condemned the world and became an heir of the righteousness that comes by faith” (Heb 11:7). “By faith Sarah herself received power to conceive, even when she was past the age, since she considered him faithful who had promised. Therefore from one man, and him as good as dead, were born descendants as many as the stars of heaven and as many as the innumerable grains of sand by the seashore” (Heb 11:11-12).

How much do we depend on God? When things aren’t going well in life, do we place our confidence in God, knowing that regardless of the outcome God is still on his throne? When we pray, do we pray knowing that God hears us, loves us, and has the power to help us?

I’m also convinced that there is a great lesson here on the efficacy of prayer.

Daniel asked Hananiah, Mishael, and Azariah “to seek mercy from the God of heaven concerning this mystery.” We then read: “The mystery was revealed to Daniel in a vision of the night.” What if Daniel and his three companions had not sought “mercy from the God of heaven”? Would God still have revealed to Daniel the mystery? While it is certainly possible that God would have done that very thing, for he was revealing his purpose to Nebuchadnezzar, it’s also possible that God would have found another way for Nebuchadnezzar to understand the meaning of the dream?

There is great power in prayer. When Zechariah was ministering in the temple, he saw an angel and became quite afraid. The angel spoke and said: “Do not be afraid, Zechariah, for your prayer has been heard, and your wife Elizabeth will bear you a son, and you shall call his name John” (Lk 1:13). “I tell you, ask, and it will be given to you; seek, and you will find; knock, and it will be opened to you. For everyone who asks receives, and the one who seeks finds, and to the one who knocks it will be opened” (Lk 11:9-10). Do we believe in the power of prayer?

Notice that the “mystery was revealed to Daniel in a vision of the night.” This was not a dream, for the Book of Daniel makes clear that dreams and visions are clearly two different forms of revelation. However, this vision comes to Daniel at night, the period during which you would expect one to dream. Pagans considered dreams a lower form of revelation than a vision.

In praising God for revealing the dream to him, Daniel uses much language that is important for the entire Book.

God’s wisdom is displayed through the dreams and visions he gives to kings and Daniel. God’s might is seen in his putting kings on the throne and being them back down-It was God who gave Jerusalem into Nebuchadnezzar’s hand, drove Nebuchadnezzar into the wilderness, and gave the Babylonian kingdom to the Medo-Persian Empire.

He changes times and seasons and removes and sets up kings-Again, we see the idea of God’s sovereignty; all the kingdoms of the world are in God’s control.

He gives wisdom to the wise and reveals deep and hidden things-again, God is seen as One who reveals his plans to man in an appropriate way.

He is the God of Daniel’s fathers.

Here is an interesting concept in this Book. God had led the Israelites out of Egyptian bondage and made a covenant with them, but when they broke the covenant, God, true to his word, allowed the Israelites to be taken into bondage. However, God also promised that when his people repented, they would be allowed to go back to Canaan. In this Book, we see: a) Daniel repenting for the sins of the people (9:1-19); b) That Daniel was in the court until the first year of Cyrus, the king who would allow the Israelites to leave (1:21). The Book of Daniel, therefore, shows the faithfulness of God to Daniel’s forefathers.

After he had thanked God for revealing Nebuchadnezzar’s dream, Daniel went and told Arioch to take him before the king so that he could reveal the dream to the king.

Arioch went before the king and told Nebuchadnezzar that he had found one who could interpret the dream. Notice that again it is pointed out that Daniel is an exile from Judah. There continues to be a great juxtaposition between the different classes of Babylonian “experts” who couldn’t interpret the dream and a “POW” who can.

Daniel also denies that he was given the interpretation of the dream because of any wisdom. On the one hand, that’s a surprising statement, for Daniel, in his prayer to God, thanked God because he gives wisdom to the wise. Daniel’s point, however, is two-fold-1) God gave Daniel understanding into the dream so that he could reveal it to Nebuchadnezzar; and 2) So, that God could accomplish his purposes.