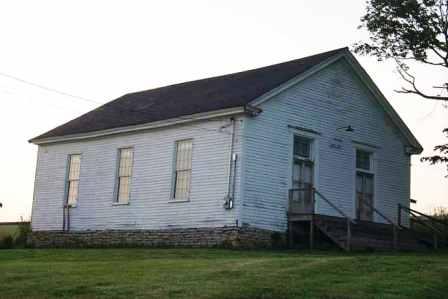 When Luther set out from Wittenberg, he did so in a well-worn gown and without money in his pocket. But he was encouraged by the enthusiasm of the people, who were waiting at the gates to cheer onward the representative of the now popular cause. “Luther forever!” cried the people, and the answer was, “No! Christ and his word forever!”

Luther’s followers did not honor that request, but they began to meet under his name. And today the Lutheran Church is well-established. But Luther never wanted people to be known by his name but simply by the name of Christ.

The Restoration Movement began in America when men decided to throw off those denominational labels and adopt only biblical labels. Thus, a segment of that Movement became known as churches of Christ.

Now, however, some among us are advocating removing “Church of Christ” from our buildings. One well-known writer in our fellowship, for example, said, “The truth is that the name ‘Church of Christ’ carries the baggage of an exclusivistic mentality to many people in our culture. ‘Oh year,’ somebody says, ‘those are the people who think they’re the only ones going to heaven.’ One lady said that she never would have come into our building if she had known we are a ‘Church of Christ.’ Once she came I and experienced the presence of God in this body, however, she is not about to leave! She and her children—from a very different denominational background—are reveling in the experience of Christ in this community of faith.”

However, should we abandon calling ourselves the Churches of Christ? This morning, I want us to ponder that question.

The Church Has No Official Name

While there are sound reasons for having “Church of Christ” up over our door, I cannot say that failing to do so is sinful. The important thing is to be biblical: “If anyone speaks, he should do it as one speaking the very words of God” (1 Pet 4:11). In attempting to speak the very words of God, we must recognize that while Scripture provides several descriptions of the church, the New Testament never gives a specific name for the body.

In Romans 16:16, Paul wrote, “Greet one another with a holy kiss. All the churches of Christ send greetings.”

Ephesians 4:12 says that officers in the church were given “to prepare God’s people for works of service, so that the body of Christ may be built up.”

“If I am delayed, you will know how people ought to conduct themselves in God’s household, which is the church of the living God, the pillar and foundation of the truth” (1 Tim 3:15).

Many have said through the years that the firstborn here is Jesus, but, with all due respect to those who hold that position, “firstborn” in this passage cannot refer to Jesus. In Greek the word “firstborn” is plural, an idea which comes across in English—The King James Version reads, “To the general assembly and church of the firstborn, which are written in heaven.” The “are” refers to a plural subject, not a singular one.

“Firstborn” in this passage refers to Christians. “Firstborn” refers to privilege and honor and speaks of the privilege and honor Christians possess in Christ: “I will also appoint him my firstborn, the most exalted of the kings of the earth” (Ps 89:27). In what way is the church the church of Christians, the firstborn? The prepositional phrase “of [whatever]” in neither Greek nor English necessarily implies possession—the phrase can be used in a variety of ways. For example, if I say, “This is a ring of gold,” I mean the ring is composed of god—it doesn’t belong to the gold. In the same way, if we refer to the church as the church of the firstborn, that doesn’t mean that the church belongs to Christians, some far from the truth, but simply that the church is composed of Christians.

“One of the seven angels who had the seven bowls full of the seven last plagues came and said to me, ‘Come, I will show you the bride, the wife of the Lamb” (Rev 21:9).

Churches, to be biblical, need to wear these descriptions. No one description is better than any other, for they all come from the mind of God.

I cannot stand here and say that a church to be biblical must call themselves the “Church of Christ,” because God has not said that. But, on the other hand, I must say that the situation in the first century when Scripture was written was vastly different from today. There weren’t various bodies calling themselves various things and practicing various doctrines vying for the hearts and souls of men.

In today’s world what we call ourselves says much about us—the word “catholic” itself means “universal” (the Catholic Church then believes in the universal nature of the church), Baptists were segregated from other groups by their practice of immersion, the name Presbyterian signifies the church government of that group, and the Seventh-Day Adventists are known for worshiping on the seventh day of the week. In such a climate, I believe calling ourselves “Churches of Christ” is extremely fitting.

Why Does the Name “Church of Christ” Fit So Well?

The answer succinctly is that the church has a special relationship with Jesus.

Jesus is the One who built the church: “I tell you that you are Peter, and on this rock I will build my church, and the gates of Hades will not overcome it” (Matt 16:18).

Jesus purchased the church. “Keep watch over yourselves and all the flock of which the Holy Spirit has made you overseers. Be shepherds of the church of God, which he bought with his own blood” (Acts 20:28). Since Jesus went to the cross to purchase the church with his very own blood, he needs to be honored in everything the church does—No one else could lay down his life for us, no one else could have purchased our pardon, and no one else suffered for us like he did.

Jesus serves as the church’s foundation: “No one can lay any foundation other than the one already laid, which is Jesus Christ” (Col 3:11).

Jesus is head of the church. “God placed all things under [Jesus’s] feet and appointed him to be head over everything for the church, which is his body, the fullness of him who fills everything in every way” (Eph 1:22-23). There are a couple things we need to notice about this text.

Not only does the church have a special relationship with Jesus, but everything the church does is to be in the name of Christ.

This doesn’t mean that we attach “in Jesus’s name” to the end of our prayers. That’s a very good practice to remind us of what we are doing. But praying in Jesus’s name means that we approach the Father through Jesus, who is the only way to the Father.

As Christians, we give cold water in the name of Christ; “I tell you the truth, anyone who gives you a cup of water in my name because you belong to Christ will certainly not lose his reward” (Mk 9:41).

We believe in the name of Christ: “To all who received him, to those who believed in his name, he gave the right to become children of God” (1 Jn 1:12).

We have life in the name of Christ: “These [miracles] are written that you may believe that Jesus is the Christ, the Son of God, and that by believing you may have life in his name” (Jn 20:31).

We Christians call on the name of Christ: “To the church of God in Corinth, to those sanctified in Christ Jesus and called to be holy, together with all those everywhere who call on the name of our Lord Jesus Christ—their Lord and ours” (1 Cor 1:2).

Whatever we do is to be in the name of Christ: “Whatever you do, whether in word or deed, do it all in the name of the Lord Jesus, giving thanks to God the Father through him” (Col 3:17).

Why would we want to remove the title of Christ from how we’re known to the world? Would we want to call ourselves by some distinctive feature? Would we call ourselves “The A Cappella Church” or “The Baptism for the Remission of Sins Church” or “The Lord’s Supper Every First Day of the Week Church?” Why do those practices and others distinguish us from other groups? Is it not because that’s what Jesus has taught?

Let us ever be those who glorify the Lord in the church, in our worship, and in our lives!

Do you need to come this morning and put on the name of Jesus in baptism?