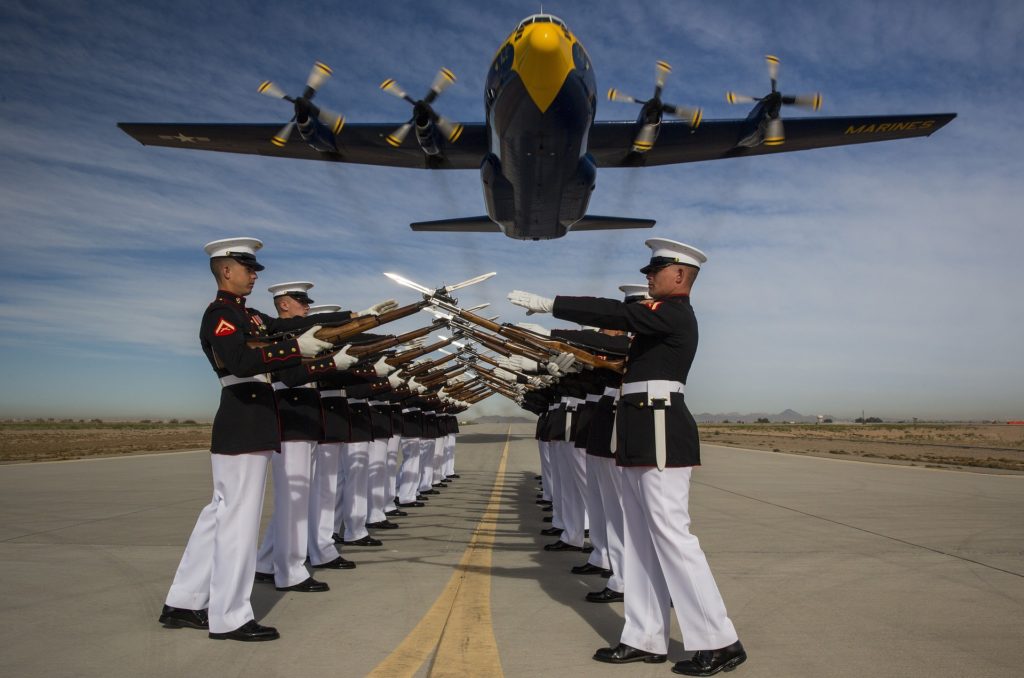 One of the most tragic events in the 1980’s was the Sunday morning terrorist bombing of the Marine barracks in Beirut, in which hundreds of Americans were killed or wounded as they slept.

A few days after that atrocity, Marine Corps commandant Paul Kelly visited some of the wounded survivors in a Frankfurt, Germany, hospital. Among the wounded was Corporal Jeffrey Lee Nashton, severely wounded in the incident. Nashton had so many tubes running in and out of his body that a witness said he looked more like a machine than a man, yet he survived. As Kelly neared him, Nashton, struggling to move and racked with pain, motioned for a piece of paper and pen. He wrote a brief note and passed it back to the Commandant. On the slip of paper were but two words—“Semper Fi”—the Latin motto of the Marines meaning “forever faithful.”

There have been many faithful Marines throughout the years—Marines who were willing to risk life and limb to defend freedom.

Yet, there is One above them who is indeed “forever faithful.” The God we serve is a faithful God. We have been exploring God’s nature from different angles. This morning we want to think about God’s faithfulness.

Throughout Scripture we are told that God is faithful. “Know therefore that the LORD your God is God, the faithful God who keeps covenant and steadfast love with those who love him and keep his commandments, to a thousand generations” (Deut 7:9). “Blessed be the LORD who has given rest to his people Israel, according to all that he promised; not one word has failed of all his good promise, which he uttered by Moses his servant” (1 Ki 8:56). “Thy steadfast love, O LORD, extends to the heavens, thy faithfulness to the clouds” (Ps 36:5). “The steadfast love of the LORD never ceases, his mercies never come to an end; they are new every morning; great is thy faithfulness” (Lam 3:22-23). “God is faithful, by whom you were called into the fellowship of his Son, Jesus Christ our Lord” (1 Cor 1:9). “It is impossible that God should prove false” (Heb 6:18). “Let those who suffer according to God’s will do right and entrust their souls to a faithful Creator” (1 Pet 4:19).

Let us explore God’s faithfulness that we might understand it and its implications.

What Does God’s Faithfulness Say about God?

God’s faithfulness says that God will keep his promises.

Because God keeps his promises, because he is faithful, we can put our trust in him. When David had been captured by the Philistines and was in danger, he penned these words: “When I am afraid, I put my trust in thee. In God, whose word I praise, in God I trust without a fear. What can flesh do to me?” (Ps 56:3-4). When recounting his severe afflictions in Ephesus for the Corinthian church, Paul wrote this in 2 Corinthians 1:9-10. The situation seems to have been utterly helpless, for Paul and his companions seem to have been sentenced to death. Yet, Paul declares that even int eh face of death he was able to put his trust, his hope, in God.

That absolute trust and faithfulness comes from the knowledge that God is faithful, and that he keeps his promises.

Louisa Stead was a woman who knew that God is faithful and could therefore be trusted. She was born in England and arrived in America in 1871. In 1875, Louisa married a Mr. Stead, and to this union was born a daughter, Lily.

When the child was four years old, the family decided to enjoy a sunny day at Long Island Sound, New York. While eating their picnic lunch, they suddenly heard cries of help and spotted a drowning boy in the sea. Mr. Stead charged into the water. As often happens, however, the struggling boy pulled his rescuer under the water with him, and both of them drowned before the terrified eyes of wife and daughter.

During her struggle which followed, Louisa Stead wrote the following words: “‘Tis so sweet to trust in Jesus, Just to take Him at His word; Just to rest upon His promise; Just to know ‘Thus said the Lord.’”

If God is faithful, Scripture—his revealed Word—is absolutely trustworthy. Scripture claims to be the trustworthy revelation from God. “For ever, O LORD, thy word if firmly fixed in the heavens” (Ps 119:89). “Scripture cannot be broken” (Jn 10:35). “All flesh is like grass and all its glory like the flower of grass. The grass withers, and the flower falls, but the word of the Lord abides for ever” (1 Pet 1:24-25).

There have been many throughout the years who have attempted to twist or alter what God has said. They’re the ones who will read a passage of Scripture and say, “Yeah, I know that’s what it says, but that’s not really what it means.” Or, they might say, “Yeah, I know and that’s how they did things back then, but times have changed, and God really doesn’t expect us to do the same thing today.”

If God is faithful and his Word cannot be broken, who are we to argue with Scripture and to say, “Yeah, but that’s not really what God wants?” Let us not be those who twist or change Scripture to suit our own desires, for God’s word “is firmly fixed in the heavens!”

What Does God’s Faithfulness Say about Me?

God’s faithfulness says that I ought to be faithful to my fellow man.

If God keeps his promises, can we do anything less but keep our promises?

When Jehoash was king, the temple was being repaired. The Israelites brought money into the house of the Lord, and the king’s secretary and high priest gathered the money and gave it to the men doing the work. But “they did not ask an accounting from the men into whose hand they delivered the money to pay out to the workmen, for they dealt honestly” (2 Ki 12:15). These men were so faithful and trustworthy they could just be given money and expected to do right.

Notice the words of Jesus in the Sermon on the Mount: “Let what you say be simply ‘Yes’ or ‘No’; anything more than this comes from evil” (Matt 5:37). We often use this passage to talk about oaths, and that is the context. But let us not ignore what Jesus said: Do what you say you’re going to do. If I say I am going to do something, I need to follow through, and if I tell you I can’t do something, I’d better not be able to do it.

Part of being faithful to others means that I always—ALWAYS—tell the truth.

“A false witness will not go unpunished, and he who utters lies will perish” (Prov 19:9). “Putting away falsehood, let every one speak the truth with his neighbor, for we are members one of another” (Eph 4:25). Let us be those who always speak the truth, and let us never utter falsehood!

God’s faithfulness also says that I need to be faithful to God.

If God is going to be faithful to me, it only makes sense that I would also be faithful unto him. Notice what Nehemiah says about the governor of the castle: “I gave my brother Hanani and Hananiah the governor of the castle charge over Jerusalem, for he was more faithful and God-fearing man than many (Neh 7:2). “My beloved brethren, be steadfast, immovable, always abounding in the work of the Lord, knowing that in the Lord your labor is not in vain” (1 Cor 15:58).

When the battleship Maine was bombed, the ship was torn and mangled and sinking. Captain Sigsbee came out of his cabin to see what was taking place with his ship. When he did so, he was met by an orderly who was standing there on guard and reported, “Sir, I have the honor to report that the ship has been blown up and is sinking.”

That is faithfulness—doing our duty in spite of the consequences to ourselves, doing what we know to be the right thing regardless of anything else. The orderly on the Maine serves as a perfect example of faithfulness. What about your faithfulness to God? Are you as faithful as you ought to be? Do you need to come this morning and begin to be faithful?