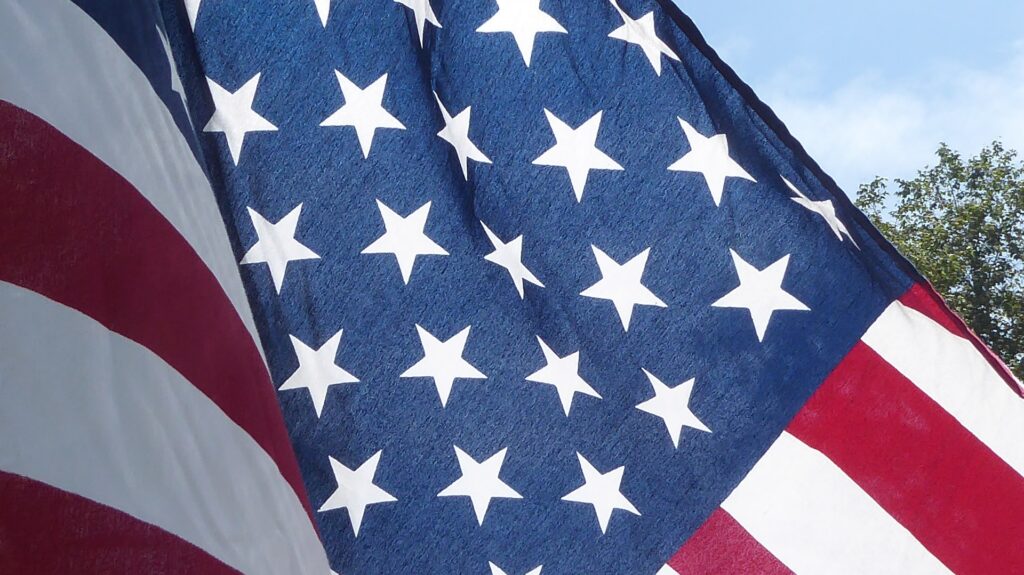 The Stars and Stripes

The flag of the United States of America is the fourth oldest national flag in the world. Only the flags of Denmark, Sweden, and the Netherlands are older.

The Star-Spangled Banner which inspired Francis Scott Key to write our National Anthem had 15 stripes and 15 stars. This flag with 11 bullet holes is now in the Museum of American History in Washington, D.C. Both stripes and stars were added to the flag when Vermont and Kentucky were admitted to the Union, in 1791 and 1792, respectively. But in 1818, Congress reduced the number of stripes to the original 13 colonies. After that only a star was added for each new state.

On July 4, 1960, the 50-star flag of the United States was flown for the first time in Philadelphia. The 50th star was added because Hawaii had been admitted to the Union as the fiftieth state the year before.

Since then, the American flag as we know it has waved from flagpoles at schools, businesses, and government buildings. The current version of the American flag is the longest-used edition in American history. There has been talk for many years about adding Puerto Rico or the District of Columbia as the fifty-first state. Yet, as of today, there are only 50 stars on our flag. Of course, I do not know if or when another star will be added to represent a fifty-first state.

But this morning, we need to add some stars to the flag, because there are some states that we need to add. I’m not talking about the debates concerning statehood for the District of Columbia and Puerto Rico. Instead, I’m speaking of states we need to add in the church.

The Star of Sameness

Scripture affirms the equality of man. When God created man, he declares, “Let us make man in our image, after our likeness” (Gen 1:26). That image of God unites all people from all races and all nationalities.

All mankind has descended from the eight souls saved on the ark. Once Noah and his sons came off the ark, God said to them, “Be fruitful and multiply and fill the earth” (Gen 9:1). God “made from one man every nation of mankind to live on all the face of the earth” (Acts 17:26).

There is not one iota of difference between us and those souls who live in Baghdad; we are the same as the homeless people who find their next meal in a dumpster.

Yet, are we willing to declare our sameness? Some in the early church had a very difficult time adding “The Star of Sameness

.” Jewish Christians had a hard time letting go of the Law and not yoking Gentile converts with the Law. Some well-to-do brethren had great difficulty accepting poorer brethren. At the Lord’s Supper in Corinth, some of the richer brethren refused to share their meals with poorer brethren. Paul wrote: “In eating, each one goes ahead with his own meal. One goes hungry, another gets drunk. What! Do you not have houses to eat and drink in? Or do you despise the church of God and humiliate those who have nothing” (1 Cor 11:21-22). James 2:1-5.

In 2002, a sixth grader in Main wrote this piercing essay: “The American flag stands for the fact that cloth can be very important. You can tell just how important this cloth is because when you compare it to people, it gets much better treatment. Nobody cares if a homeless person touches the ground. A homeless person can lie all over the ground all night long without anyone picking him up, folding him neatly, and sheltering him from the rain. School children have to pledge loyalty to this piece of cloth every morning. No one has to pledge loyalty to justice and equality and human decency. But we all have to promise to love a rectangle of red, white, and blue cloth. Betsy Ross would be quite surprised to see how successful her creation has become. But Thomas Jefferson would be disappointed to see how little of the flag’s real meaning remains.”

The Star of Service

The “Star of Service” declares that we are to serve our God. In the Declaration of Independence, Jefferson wrote, “We hold these truths to be self-evident, that all men are created equal, that they are endowed by their Creator with certain unalienable Rights, that among these are Life, Liberty and the pursuit of Happiness.”

In Luke 20, the scribes and the chief priests sent spies to capture Jesus in some sort of mistake. They asked Jesus, “It is lawful for us to give tribute to Caesar, or not?” (Lk 20:22). Jesus asked to see a coin and asked these spies whose image was on it. They answered, “Caesar’s.” Jesus then said to them, “Render to Caesar the things that are Caesar’s, and to God the things that are God’s” (Lk 20:25).

The point is: It is God who gave us life; it is his life from the start, and we owe it to him to return that life to him.

We must establish the State of Service and serve our God with everything we have. “My beloved brothers, be steadfast, immovable, always abounding in the work of the Lord, knowing that in the Lord your labor is not in vain” (1 Cor 15:58). “Let us be grateful for receiving a kingdom that cannot be shaken, and thus let us offer to God acceptable worship, with reverence and awe” (Heb 12:28)

Shal we be those who serve our God?

The Star of Salvation

On July 4, 1776, the Continental Congress was anxious to escape from the tyranny of King George III.

Today, we face a much different and much more brutal tyrant—sin. “Truly, truly, I say to you, everyone who commits sin is a slave to sin” (Jn 8:34). We have all seen the tyranny of sin. We’ve seen how gambling makes people want to gamble more, whether they win or lose. We’ve seen people with drinking problems get worse and worse until they admitted they needed help and entered recovery. We’ve seen people who learn how easy it is to cheat until they get caught. The Apostle Paul described this tyranny in words that ring so true: Romans 7:14-20.

Yet, there is a way out of that tyranny: “If you abide in my word, you are truly my disciples, and you will know the truth, and the truth will set you free” (Jn 8:31-32). The word of Jesus is the way out of the tyranny of sin. That word teaches us to live appropriately; that word trains “us to renounce ungodliness and worldly passions, and to live self-controlled, upright, and godly lives in the present age” (Tit 2:12). That word teaches us how to come to God out of slavery. At Pentecost, “those who receive his word [Peter’s preaching] were baptized, and there were added that day about three thousand souls” (Acts 2:41).

In the movie Independence Day, the earth is nearly overrun with extraterrestrial creatures. Once these aliens have been soundly defeated, the American president speaks from a platform in front of the not-quite-repaired Capitol and declares, “We will not go quietly into the night! We will not vanish without a fight! We’re going to live on! We’re going to survive! Today we celebrate our Independence Day!” Do you need to speak those words to the tyrant of sin this evening? Do you need to declare your Independence Day?