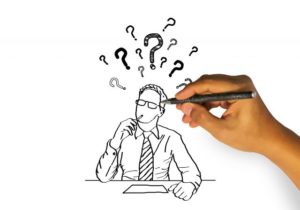 When Clarence Darrow was a young lawyer, he was presenting a suit for damages in a civil court in a small town. The jury that was selected appeared to be lower than average in intelligence. However, one man seemed much superior to the rest and would probably be elected foreman by the jury–according to the local legal customs. Throughout the case, therefore, Darrow concentrated on this man, and addressed all his oratory to him.

The case finally went to the jury. After an unusually long wait, the jury filed in, and Darrow saw that his surmise had been correct. The object of his attention headed the procession as foreman. “Gentleman,” said the judge, “have you reached a decision?” “No, Your Honor,” answered the foreman, “we’ve come back to ask for some information. There are two words which have been used throughout the trial which we don’t know the meaning of.” “What are they?” asked the judge. “One word is ‘plaintiff’ and the other is ‘defendant.’”

Some people, with all due respect, are quite ignorant. Jesus, in our passage, deals with some Sadducees who were quite ignorant. The Sadducees, who denied the resurrection, came and asked Jesus about what would happen in the resurrection if a woman had been married to seven brothers. “If brothers dwell together, and one of them dies and has no son, the widow of the dead man shall not be married to a stranger outside the family; her husband’s brother shall go in to her, take her as his wife, and perform the duty of a husband’s brother to her” (Deut 25:5). Such marriage was practiced in many ancient cultures–the marriage not only provided an opportunity for the birth of a son, as Moses mentioned, but also provided for the support of the widow.

The Sadducees said, “If she’s been married to seven brothers, to whom shall she be married in the resurrection?” Jesus said to them, “You are mistaken, not knowing the Scriptures nor the power of God” (Matt 22:29). Tonight, we want to explore the connection between error and ignorance of the Scriptures. We’ll take this text and strive to understand what Jesus is saying.

This Text Implies that the Scriptures are the Standard of Life

Theologians distinguish two ways that God has revealed Himself to man.

There are examples of individuals deviating from Scripture to their own peril.

If the Sadducees had known the Old Testament, they would have known a multitude of passages which teach the resurrection. David prophesied of the resurrection of the Christ: “You will not leave my soul in Sheol, Nor will You allow Your Holy One to see corruption” (Ps 16:10). Job had confidence in a resurrection: “I know that my Redeemer lives, And He shall stand at last on the earth; And after my skin is destroyed, this I know, That in my flesh I shall see God” (Job 19:25-26). Daniel prophesied of the resurrection: “Many of those who sleep in the dust of the earth shall awake, Some to everlasting life, Some to shame and everlasting contempt” (Dan 12:2).

Jesus also said that the Sadducees erred because they did not know God’s power. Once we have come to understand that God is all-powerful, is it really a stretch to believe that He can raise the dead? When standing before Agrippa, Paul said, “Why should it be thought incredible by you that God raises the dead?” (Acts 26:8). God has all power. When Mary wondered how she could conceive even though she was a virgin, the angel told her, “With God nothing will be impossible” (Lk 1:37). There is nothing impossible with God–not even raising the dead.

The Sadducees further erred because they did not understand the nature of the body in the resurrection. Jesus told the Sadducees, “In the resurrection they neither marry nor are given in marriage, but are like angels of God in heaven” (Matt 22:30). The Sadducees thought they’d trick Jesus because they thought, “If there is a resurrection, resurrected bodies would be just like our current bodies.” We know that’s not the case. 1 Corinthians 15:42-44. “Beloved, now we are children of God; and it has not yet been revealed what we shall be, but we know that when He is revealed, we shall be like Him, for we shall see Him as He is” (1 Jn 3:2). We’re going to have bodies in the resurrection–Paul refers to our state as a “spiritual body” — but they will be nothing like the bodies we now have. The Sadducees didn’t get that point.

The Sadducees erred because of ignorance. Many in biblical times erred because of ignorance. Peter said to the Jews in the temple, “Yet now, brethren, I know that you did it in ignorance, as did also your rulers” (Acts 3:17). “None of the rulers of this age knew [the wisdom of God]; for had they known, they would not have crucified the Lord of glory” (1 Cor 2:8). Many in the modern world err because of ignorance. How many of you earnestly tried to do right before you came to Christ, but you were in error–not because of rebellion or pride–but simply because you didn’t know any better? How many individuals do you know who really want to do what’s right, but they’re in error simply because they don’t know any better?

God no longer accepts ignorance as a valid excuse. “Truly, these times of ignorance God overlooked, but now commands all men everywhere to repent” (Acts 17:30). God will not accept ignorance as an excuse.

Some Who Know the Scriptures Also Err–Not for Ignorance, but for Other Reasons

Some err because they want their own will. That was the rich young ruler’s problem (Matt 19:16-22). The ruler had kept the Law from his youth, and he asked Jesus what else he lacked. Jesus said, “Go sell your possessions and give to the poor.” The ruler, however, was not willing. He had great possessions, and he would not give them up. That was Jonah’s problem–God told him to go to Nineveh, but he would not go; only after God twisted and twisted his arm would he go.

We must always seek God’s will, not our own. Jesus sought God’s will. “Your will be done On earth as it is in heaven” (Matt 6:10). “O My Father, if it is possible, let this cup pass from Me; nevertheless, not as I will, but as You will” (Matt 26:39). It is important that as we pray, we ask God’s will and not ours be done. Yet, it is vital that we strive to live according to God’s will, not our own.

Some err because of preconceived notions about what the Bible teaches. The earliest Jewish Christians had this struggle when it came to the Great Commission. Jesus had instructed the disciples to preach His message in all the world: “You shall receive power when the Holy Spirit has come upon you; and you shall be witnesses to Me in Jerusalem, and in all Judea and Samaria, and to the end of the earth” (Acts 1:8). Yet, it took a miracle to convince Peter that he should preach the gospel to the Gentiles. The Jewish Christians had their own ideas about what the gospel meant, and they couldn’t deviate from that.

Some in our own day do the same. 1 Peter 3:21 reads, “There is also an antitype which now saves us–baptism (not the removal of the filth of the flesh, but the answer of a good conscience toward God), through the resurrection of Jesus Christ.” Some friends of mine in college studied with a lady whose father had been a denominational preacher. Whenever she would read 1 Peter 3:21, she would read it, “baptism that does not now save you also” rather than “baptism that does now save you also.” As many times as the lady read the passage, she would never read “now”–she always read “not.” Let us not have preconceived notions of what Scripture teaches, but let us search the Scriptures to understand God’s will!