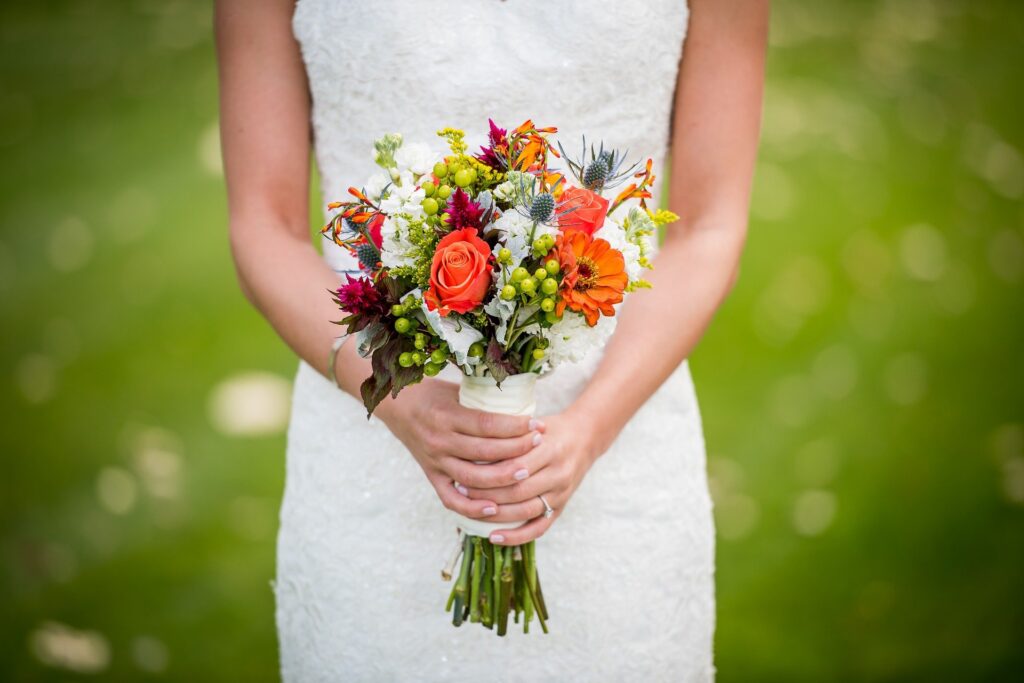 The Church as the Bride of Christ

At Cambridge, Pennsylvania, Marcus met Alexandra, and found her company delightful because Alexandra, too, was Greek and spoke the Hellenic tongue, as well as English. One day she took him to the office of an American gentleman. Marcus didn’t know it was the justice of the peace. Alexandra spoke in English, and Marcus didn’t know what she was saying. The justice of the peace spoke, also in English and Marcus did understand a word or two, like “Yes” and “I do.” And Marcus mumbled obediently, not knowing what it meant. He was being married but he didn’t know it.

After a while he didn’t go around with Alexandra anymore, quite forgot her, until he was arrested for desertion and non-support. That’s when he found out he was married. In court Alexandra admitted that the story Marcus told had certain points of accuracy. She conceded that it might be that Marcus didn’t completely understand that he was getting married, didn’t quite fathom the meaning of the words when he mumbled “Yes” and “I do.” He had acquired a wife, and it was English to him.

This evening, we want to take a look at the biblical images of Christ as married to the church and explore the implications of that image.

In the Gospels, Jesus is often referred to as the bridegroom. When questioned whether or not he was the Christ, John the Baptist replied in John 3:28-30. Jesus often told parables concerning a bridegroom with himself obviously as the bridegroom. Undoubtedly, the most famous is in Matthew 25:1-13.

In the rest of the New Testament, Jesus is pictured as the groom (and, at times, the husband) and the church is pictured as his bride. Romans 7:1-4. “I am jealous for you with godly jealousy. For I have betrothed you to one husband, that I may present you as a chaste virgin to Christ” (2 Cor 11:2). Ephesians 5:22-33—Notice that Paul said that he was writing about Christ and the church, not about husbands and wives! “Let us be glad and rejoice and give Him glory, for the marriage of the Lamb has come, and His wife has made herself ready” (Rev 19:7). “I, John, saw the holy city, New Jerusalem, coming down out of heaven from God, prepared as a bride adorned for her husband” (Rev 21:2).

Let’s explore the implications of the church as the bride of Christ:

This Image Shows a High View of Christ

In the Old Testament, the Israelite nation is often pictured as God’s wife. “Your Maker is your husband, The LORD of hosts is His name; And your Redeemer is the Holy One of Israel; He is called the God of the whole earth” (Is 54:5). “‘Return, O backsliding children,’ says the LORD; ‘for I am married to you. I will take you, one from a city and two from a family, and I will bring you to Zion’ ” (Jer 3:14). “I will betroth you to Me forever; Yes, I will betroth you to Me In righteousness and justice, In lovingkindness and mercy” (Hos 2:19).

Because God was married to Israel, paganism among the Israelites was regarded as adultery. “They would not listen to their judges, but they played the harlot with other gods, and bowed down to them” (Judg 2:17). “Those of you who escape will remember Me among the nations where they are carried captive, because I was crushed by their adulterous heart which has departed from Me, and by their eyes which play the harlot after their idols; they will loathe themselves for the evils which they committed in all their abominations” (Ezek 6:9).

The only way the New Testament writers could apply such images to Christ is if He is divine. Throughout His ministry, Jesus was accused of blasphemy because He claimed to be equal with God. When Jesus forgave a paralytic, the scribes said to themselves, “Why does this Man speak blasphemies like this? Who can forgive sins but God alone?” (Mk 2:7). On another occasion, when Jesus claimed to be divine, the Jews “took up stones to throw at Him; but Jesus hid Himself and went out of the temple” (Jn 8:59). On one level, the Jews had things exactly right: Jesus was claiming to be divine. But on another level, the Jews had it all wrong, for Jesus wasn’t just claiming to be divine – He is divine.

This Image Shows the Son’s Love

This image shows the Son’s love to such an extent that Paul could hold up the Son as an example for husbands: “Husbands, love your wives, just as Christ also loved the church and gave Himself for her” (Eph 5:25).

Jesus has intense love for His people. Romans 8:35-39. “I have been crucified with Christ; it is no longer I who live, but Christ lives in me; and the life which I now live in the flesh I live by faith in the Son of God, who loved me and gave Himself for me” (Gal 2:20). “By this we know love, because He laid down His life for us. And we also ought to lay down our lives for the brethren” (1 Jn 3:16).

Throughout His ministry, Jesus showed His love in practical ways. When two men called out to be healed, “Jesus had compassion and touched their eyes. And immediately their eyes received sight, and they followed Him” (Matt 20:34). Luke 7:12-15. Notice Jesus’ motivation for washing the disciples’ feet: “Now before the feast of the Passover, when Jesus knew that His hour had come that He should depart from this world to the Father, having loved His own who were in the world, He loved them to the end” (Jn 13:1). For Jesus, love was not bound up in emotion. Rather, Jesus demonstrated love through action. He showed His love for His church by giving Himself up for her.

A lady attended a church service and waited after the service for some spiritual help. When she was asked if she could quote any of the Bible, she said that she had once learned John 3:16 in Sunday School. She then quoted it: “For God so loved the world that He gave His only forgotten Son, that whosoever believeth in Him should not perish, but have everlasting life.” Noticing that she had said “forgotten” for “begotten,” the preacher said, “Do you know why God forgot His Son?” She said, “No, I don’t.” The preacher said, “It was because He wanted to remember you.” Isn’t that the great truth of Christianity – that Jesus willingly went to the cross and allowed Himself to be abandoned by the Father so that He could save us, His people?

Because Jesus has loved His people as a husband loves a wife, we, as His people, need to exhibit love. “By this all will know that you are My disciples, if you have love for one another” (Jn 13:35). “This is My commandment, that you love one another as I have loved you” (Jn 15:12). “Since you have purified your souls in obeying the truth through the Spirit in sincere love of the brethren, love one another fervently with a pure heart” (1 Pet 1:22).

Do we, like Jesus, express our love in practical ways? When a brother or sister is ill or struggling, do we pray for him/her, do we visit him/her, or do we call to see what we can do? When a brother or sister is too ill to cook for himself, do you sisters volunteer to help provide food? Do you guys volunteer to cut the grass or anything else you can do? Are we expressing love in practical ways, or does our love just stay in ourselves?

This Image Shows the Son’s Headship

The image of headship is so bound up in the idea of Jesus as the husband of the church that Paul could admonish wives to be submissive to their husbands the way the church submits to Christ (Eph. 5:22-24).

The church has every reason to submit to Christ:

There are some important consequences in the Son’s headship.

This means that the church is not a democracy – it is a theocracy.

It is governed by Christ, not by men. Even the leaders in the local church don’t have control over the church – their role is to call the church to submit to Christ.

This means that we need to submit ourselves to Christ.

There is an epidemic in this nation of people joining churches for what they can get out of it. Thus, they join the church with the nicest facilities, the nicest daycare, the most entertaining preacher, or the most uplifting worship. That is a terribly wrong way to look at church; it’s not what we can get, it’s what we can give.

We cannot choose what we teach and practice as a church. Jesus is the head of the church, we are the church of Christ, and we must do what He bids. I’ve seen some bumper stickers lately for the Unitarian Universalist Church, a group which believes that everyone will be in heaven and that God is just some impersonal force. The bumper sticker reads: “We have room for all beliefs – yours.” No, we have room for what Jesus says is right.

This Image Shows of the Commitment of Christians

In this world, marriage is a permanent relationship. Jesus taught that adultery is the only reason one could acceptably divorce and remarry (Matt 19:9). If a woman “marries another man, she will be called an adulteress; but if her husband dies, she is free from that law, so that she is no adulteress, though she has married another man” (Rom 7:3).

Likewise, the relationship we enter into with Christ as our bridegroom is a permanent one. “No one, having put his hand to the plow, and looking back, is fit for the kingdom of God” (Lk 9:62). “Now the just shall live by faith; But if anyone draws back, My soul has no pleasure in him” (Heb 10:38).

Let us commit ourselves to the Lord Jesus Christ! Do you need to come and reaffirm your commitment tonight?