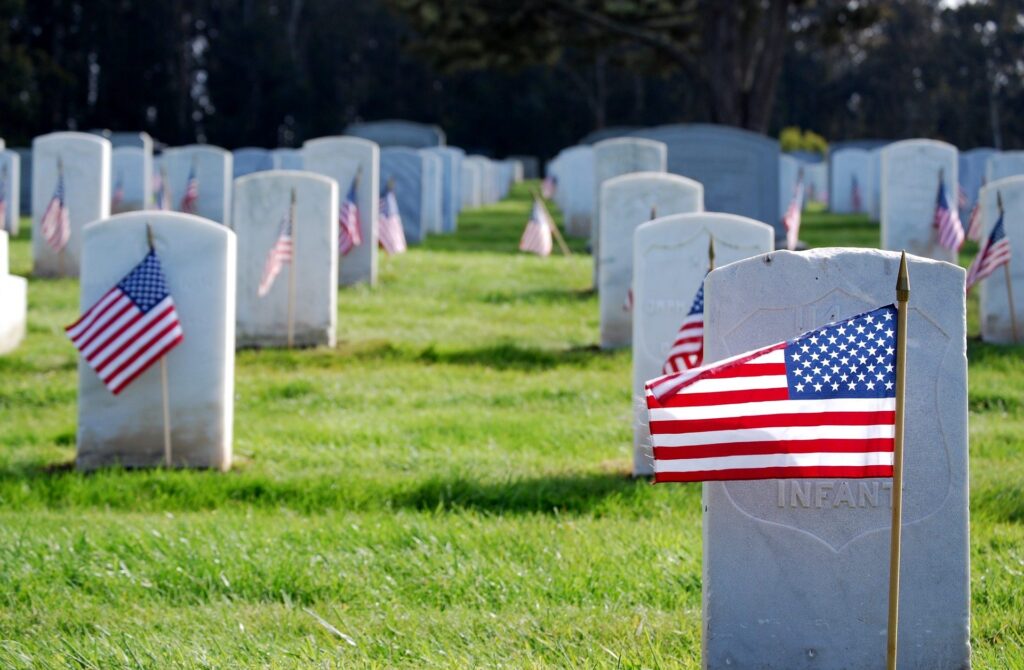 My grandmother’s sisters and a couple of her brothers moved to Dayton, Ohio to find work long before I was born. But every Memorial Day they would return to Kentucky. On Memorial Day weekend, my Nannie’s house was full of family and good food and good card games (I still love to play rummy 500 and a few other games I learned from Nannie and her sisters).

On Sunday, Nannie and her brothers and sisters would go to the small town of Ezel, Kentucky—up in Morgan County—and lay flowers on the graves of their parents and other family members. They would then travel the 3-and-a-half hours back to Dayton, Ohio. Think about that for a second: My great-aunts and uncles and their families would travel over 3 hours once a year for the primary purpose of decorating their parents’ graves. And, yes, my grandmother and her sisters often called this weekend “Decoration Day.”

I’m confident that many of you have traditions surrounding Memorial Day. Maybe you look forward to sitting on the couch on Sunday afternoon and watching the Indianapolis 500. Maybe you enjoy going to Galveston or having a cookout with your family and friends. Maybe you go to the cemetery and decorate the graves of your loved ones.

Of course, the real reason for Memorial Day is to remember those who have died in defense of this nation’s freedoms. By and large, we have enlarged the day to remember all those who have left this world. My Nannie and her brothers and sisters had the right idea—taking flowers and decorating the graves of loved ones.

This morning’s text is about some women who celebrated “Decoration Day,” but their “memorial day” turned out to be rather weird. Mary Magdalene, Mary the mother of James, and Salome went to a cemetery early on a Sunday morning to decorate a corpse for burial, but they discovered there was no corpse to decorate.

A young man dressed in white told these three women that Jesus had been raised. But that young man gave the women an important commission: To go tell Jesus’s disciples and Peter that the Lord was going before them to Galilee. As the women stood in the empty tomb, they learned an important lesson I want you to learn this morning: “You tell people the tomb is empty.”

That is a message the world desperately needs to hear. This weekend families all over the country are gathering at cemeteries to place flowers on loved ones’ graves. Every family has loved ones buried in a cemetery:

Therefore, people need to know about that empty tomb in Jerusalem. They need to know how a Savior was crucified, buried, and then walked forth from the tomb after three days. People need hope in the face of death and grief and destruction. This morning let’s examine the women’s journey to an empty tomb that you might learn the importance of telling people the tomb is still empty.

The women bought spices to anoint Jesus’s body. Jewish tradition permitted one to anoint a body on the Sabbath; however, Jesus died late on a Friday afternoon and the Sabbath began at sundown that evening. The women couldn’t buy spices during the Sabbath, so they had to wait at least until sundown on Saturday evening to go to the merchants. The women could have gone to the tomb Saturday evening, but they likely could not have safely and easily gotten to the tomb in the dark. All of that “conspired” to make Sunday morning the right time for these women to go to the tomb.

On the way to the tomb that Sunday morning, they kept asking each other, “Who will roll away the stone for us from the entrance of the tomb?” The verb “saying” is in the imperfect tense in the Greek; the imperfect refers to a repeated action in the past tense. You could translate this as, “They kept saying to each other.” The women were worried about moving that large stone at the tomb’s entrance. But why were they worried about it? Jesus had said over and over and over that he would be crucified and then be resurrected on the third day.

When they got to the tomb, the women noticed that the stone had been rolled back. Think about this—that large stone was rolled away from the tomb, not so Jesus could get out, but so that the women could get in!

A young man dressed in white was in the tomb; this young man announced to the women that Jesus of Nazareth who was crucified had been raised. He offered them proof of Jesus’s resurrection in the fact that Jesus wasn’t there—he told the women to look at the place where Jesus had been laid.

The young man gave the women a commission—to go back and tell the disciples and Peter that the Lord was going ahead of them to Galilee and that he would see them there. This passage demonstrates Jesus’s trustworthiness.

Notice that the women did not walk out of the tomb, but they ran out—they fled. You could almost understand their fleeing—they have just heard the most amazing and marvelous news in the history of the world—you’d think they would want to run out and tell others. But that’s not at all what happened—they ran out and kept their mouths shut.

One: Know Who sends you.

For just a second, put yourself in the shoes of the women standing there in the tomb: Before you is an angelic being from the presence of God who tells you to go inform the disciples and Peter that Jesus has been raised. Don’t you think you would have gone to the Eleven and told them Jesus walked out of his tomb that morning? That’s not what the women did with their divine commission—they ran home and kept their mouths shut.

God himself has told you to tell others about the empty tomb.

You need to tell others about the empty tomb. You can’t be like the women in Mark 16 and keep your mouth shut. . . . You need to be telling folks about a resurrected Lord.

Two: Know to whom he sends you.

The young man dressed in white was very specific to the women—they were to go to the disciples and Peter to tell them about the resurrected Lord.

Jesus was very specific about your commission—you’re to go to everyone. “Go . . . and make disciples of all nations” (Matt 28:19). You can’t look down on people of certain racial or ethnic backgrounds. You can’t think that certain people are beneath you. You can’t think that certain people have committed sins which are too horrible to come to Jesus. The truth of the matter is that Jesus came and died and was raised for all people:

God wants everyone to hear his truth, and you are uniquely placed to take that truth to people you know. Is there someone in your circle of friends with whom you have great influence? Do you know someone who is hurting and whose burden you can lift? Could you dry someone’s tears? Might you give a hug to a discouraged soul? As you minister, can you not say, “Let me tell you why I have hope . . . how I get through dark days . . . how I have a joy that can never be taken away?”

Prayerfully consider to whom you can go this week and then take the gospel to at least one person. If you need my help, ask. If you need the elders’ help, ask.

Do you need to come to the cross for yourself this morning?