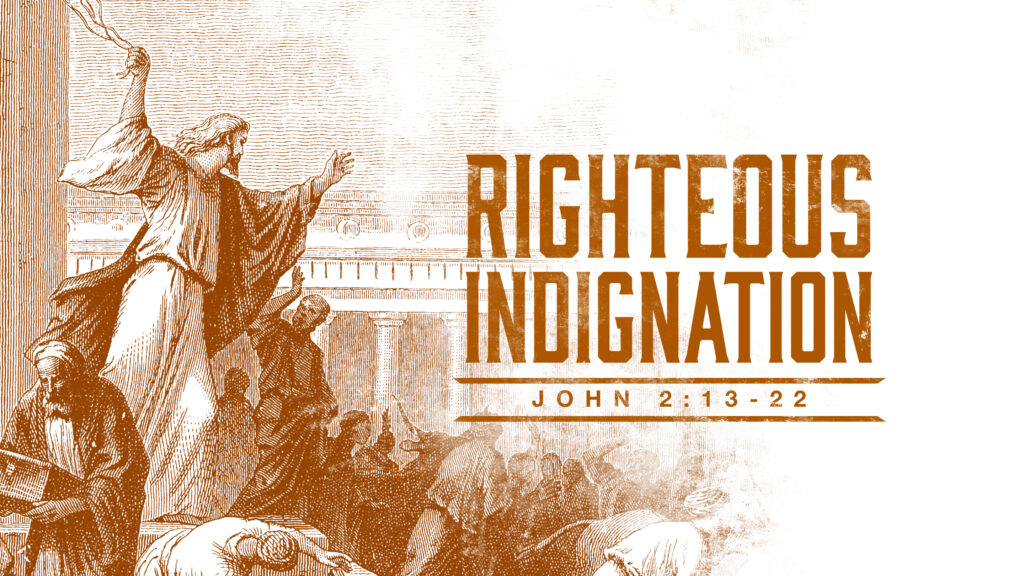 I lost my cool a couple weeks ago at the gym. Since I’ve started going to LA Fitness in Pasadena, it’s been really difficult to get a shower because female janitors often walk in unannounced. I talked with the manager, and he told me that he would have a talk with the ladies.

There may have been times you’ve also needed to express righteous indignation. Maybe you had a child mistreated at school by a teacher or by a bully, and you met with the administration. Maybe you had some immorality shoved in your face, and you let your feelings be known very quickly. Maybe there was even some error in the church, and you had to stand up and say, “Enough!”

In this morning’s text, Jesus showed some righteous indignation. He even made a whip and flung it around; we’re not told that the Lord actually hit anyone with the whip, but there is a clear threat of violence. Jesus went up to the tables of the money changers and flipped them over. If you acted in public the way Jesus did in the temple, I have little doubt you’d be arrested. The Jesus is this text is not the meek and mild Jesus so many folks picture.

To understand the image here, you have to grasp why John placed the cleansing of the temple at the beginning of the Lord’s earthly ministry, instead of at the end where the other Evangelists place it. Yes, I know some commentators will tell you that Jesus acted this way in the temple twice, but that is very unlikely. Here’s why:

The reason some folks will talk about two cleansings of the temple is that they think John would be lying if he wrote about something at the beginning of Jesus’s ministry that really happened at the end. But:

You see, John told us Jesus brought a new day of approaching God. In our text this morning, John focused on worship and taught: “Jesus came to change worship forever.”

Others were sitting at tables exchanging money. The Jews were not permitted to coin their own currency. Because the Roman coins had an image of the emperor as a deity, Jews considered them blasphemous and refused to use them. Thus, silver didrachmas from Tyre were used for payment in the temple. The moneychangers would make sure everyone had the proper currency.

The Lord made a whip out of cords. Notice Jesus took the time to make a whip. What Jesus did in the temple was not a rash decision, but he had time to contemplate precisely how he would handle the blasphemy inside.

Jesus told the folks at the temple to stop making his Father’s house a market. The temple was a place for prayer and worship, but the people inside had turned the temple into something else altogether.

The disciples remembered the prophecy of Psalm 69:9.

The Jews asked by what authority Jesus acted as he did. I find it interesting they asked that question. They don’t accuse Jesus of doing wrong, they do not deny the charge the Lord has made against them. Instead, they want to know the authority by which Jesus performed his acts.

Jesus told them to destroy the temple and allow him to raise it up. This verse—besides prophesying of Jesus’s death and resurrection—points to a change in worship. No longer would worship take place in the temple; instead, worship would take place through him.

Proper worship since the time of Pentecost has always taken place through Jesus; that’s because “Jesus came to change worship forever.” What does Jesus’s changing worship teach today?

Jesus has authority over worship.

That’s clear from the text. Jesus walked into the temple and strongly disapproved of what he found. He, therefore, made a whip and drove the people out. If the Lord did not have authority over worship, he could never have done what he did.

God has given Jesus all authority. “All authority in heaven and on earth has been given to me” (Matt 28:18). “God placed all things under his feet and appointed him to be head over everything for the church” (Eph 1:22).

Jesus wants you to be concerned about worship. To the woman at the well, Jesus said, “Yet a time is coming and has now come when the true worshipers will worship the Father in the Spirit and in truth, for they are the kind of worshipers the Father seeks” (Jn 4:23). God wants people to come and worship him. “Praise our God, all you his servants, you who fear him, both great and small!” (Rev 19:5).

Too often I’m afraid that many don’t view worship as important. They’ll come if they’re in the mood that morning. They’ll come if there isn’t a ballgame or something else they need to do. They’ll daydream during the Lord’s Supper. They’ll talk and disrupt the worship of the folks around them.

When asked the authority he had to act violently in the temple, Jesus said, “Destroy this temple, and I will raise it again in three days” (Jn 3:19). Jesus did not speak of Herod’s temple, but he spoke of his body (Jn 3:21). After Jesus was raised from the dead, the disciples remembered what he had said and believed (Jn 2:22).

Why did Jesus change everything about worship? Because he died and was raised. You know that Jesus’s death and resurrection changed worship forever. We assemble on the first day of the week because that’s the day Jesus walked from the tomb. We don’t offer animal sacrifices, for Jesus offered himself once for all. We approach God through the blood Jesus gave at the cross: Hebrews 10:19-22.

Do you need come this morning and be cleansed from a guilty conscience and have your body washed with pure water?