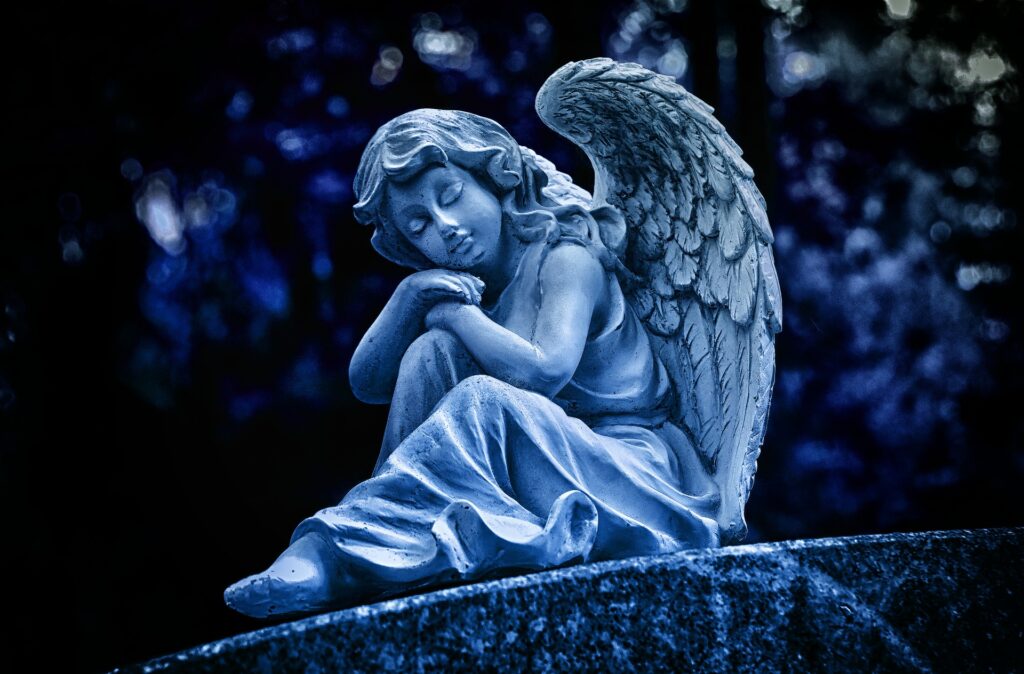 What Do Angels Do Anyway?

Charles Herbert Lighttroller was tall, sun-bronzed, and handsome, possessing a deep, pleasant speaking voice. His mother died during his infancy, his father abandoned him, and he ran off to sea the age of 13. By 1912, he was a respected seaman for the White Star Line and was assigned to the maiden voyage of the greatest ocean liner ever built, the Titanic. He was just drifting off to sleep on April 14th, when he felt a bump in the ship’s forward motion. Hopping from his bunk, he soon learned that the Titanic had struck an iceberg. As the horrors of that night unfolded, Lightroller finally found himself standing on the roof of the officer’s quarters, the water lapping at his feet, as he helped any and all around him into lifeboats.

Finally, there was nothing left for Lightoller to do but jump from the roof into the freezing waters of the North Atlantic. The shock of the 28-degree water against his sweating body stunned him. As he struggled to regain his bearing and swim away from the ship, he was suddenly sucked back and pinned against a ventilation grate at the base of a funnel that went all the way down to Boiler Room 6. He was stuck, drowning, and going down with the ship. Suddenly Psalm 91:11 came clearly to his mind: “For He shall give His angels charge over you, to keep you in all your ways ….” At that very moment, a blast of hot air exploded from the belly of the ship, shooting Lightoller like a missile to the surface of the ocean. At length, he managed to grab a piece of rope attached to the side of an overturned lifeboat and float along with it until he pulled himself on top of the upside-down boat.

He turned and watched the last moments of the Titanic. Her stern swung up in the air until the ship was in “an absolutely perpendicular position.” Then she slowly sank down into the water, with only a small gulp as her stem disappeared beneath the waves. There were about thirty men atop the lifeboat, and together they recited the Lord’s Prayer, then Lightoller took command of the boat and guided them to safety.

Did an angel safe Lightoller when he remembered Psalm 91:11? While I’m sure many would answer in the affirmative, I’m not at all inclined to do so. Then, what do angels do? Angels are created beings: Colossians 1:16. Why did God create the angels?

Angels are presented throughout the Scriptures as praising God.

I really think this says more about God than he does the angels. This says that God is so holy and so great that he deserves continuous praise, and he created the angels to give him such praise and honor.

I’ve had individuals tell me, “God has a big ego problem to create man and angels for his praise.” Those who say such totally misunderstand God: he is worthy of that continual praise. Anyhow, who is the creature to tell the Creator he shouldn’t have made him the way that he did? You might build a house, and that house doesn’t turn around and say to you, “Hey, you might have built me, but you don’t have the right to live in me. I’m going to do what I want.” That doesn’t happen with houses, and it shouldn’t happen with God’s creation!

I think this says something about us, too. If angels, who do not benefit from God’s grace the way we do, praise God, shouldn’t we be lifting our voices to God? Let us determine to praise God!

Angels are depicted as ministering to God’s saints. Angels ministered to Jesus in the wilderness (Mk 1:13). Hebrews 1:14.

Angels rejoice over the conversion of sinners.

Luke 15:10. When you and I came to repentance, the angels in heaven rejoiced. Think about that for a moment: angels who have no hope of salvation if they sin, rejoice when you and I come to salvation. If they rejoice at salvation, how grateful we ought to be for our salvation! Acts 8:39. There ought to always be a smile on our faces and a song in our hearts out of gratitude for the salvation we have through Christ!

Angels watch over the people of God.

We’re told in Scripture that God’s angels watch over us. Psalm 34:7. Psalm 91:11-12. You probably remember Psalm 91 as it refers to Jesus in the New Testament. Honestly, I was inclined not to mention this passage as referring to all God’s people; I was thinking this passage applied primarily to Jesus. Then I remembered something important: Satan is the one who quoted this passage as applying to Jesus. I’m not so certain that Satan knew all that he was talking about.

Angels protect the little ones.

Does this verse imply that there are guardian angels? I personally think that the verse implies just that. How do they differ from other angels? How do they serve us? I really don’t know the answer to those questions, and I only have the reference to “their angels” in this verse to support the idea of guardian angels. But, I do hold that view based on this passage.

Angels are present in church.

In some sense, angels are active in the church.

I’m not sure what all they do as they are present in the church, but Scripture teaches that they are.

Angels take believers to the bosom of Abraham.

Luke 16:22. It is a heartbreaking and eerie experience to be in the room when someone dies. Yet, when a Christian dies, there are more creatures there than simply family and friends. Angels of God are present, as well, and they take the spirit of that Christian to Paradise to await the bodily resurrection. I’m convinced that this shows that even after death God still loves and cares for his people. His love and concern for us does not end when this life ends, but his love and care becomes new as he and his angels care for us.

Angels are depicted as executing justice on the enemies of God. Angels destroyed Sodom and Gomorrah (Gen. 19). 2 Kings 19:35. “The Son of Man will send out his angels, and they will weed out of his kingdom everything that causes sin and all who do evil” (Matt 13:41). Jesus’ powerful angels will come with him when he destroys the world (2 Thess. 1:7).

Thus, when this world is destroyed, angels will play a role in it. The angels will be the instrument through which God executes his judgment. Are you ready for that judgment to come?