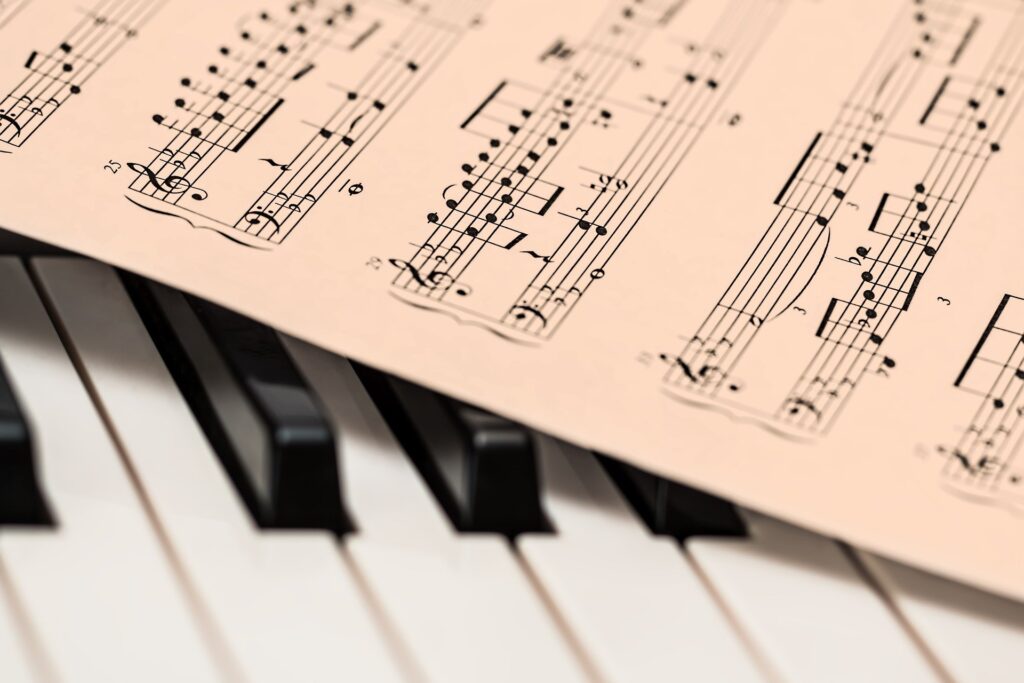 Is Instrumental Music in Worship Simply an Aid?

The argument that instrumental music is an aid to worship has been used among the heirs of the Restoration Movement since Pinkerton first used it. There isn’t a one of us who hasn’t worshiped with a congregation where we found the singing much less-than-desirable. For aesthetic purposes, an instrument would have been highly desirable in such circumstances. But, is it proper to use the instrument as an aid? What if the piano helps the singing sound more pleasing to the ears? In such cases does God approve of the use of instrumental music?

This Argument Misunderstands Instrumental Music in the Old Testament

The idea that instrumental music can be an aid to worship overlooks two very important principles from Old Testament worship.

The instrument was not an aid in the Old Testament; it was worship.

“The whole assembly worshiped, and the singers sang, and the trumpeters sounded” (2 Chr 26:28)-The trumpeters were not aiding the singing; their blowing on the trumpet was worship in and of itself.

“The Levites, thirty years old and upward, were numbered, and the total was 38,000 men. ‘Twenty-four thousand of these,’ David said, ‘shall have charge of the work in the house of the LORD, 6,000 shall be officers and judges, 4,000 gatekeepers, and 4,000 shall offer praise to the LORD with the instrumentals that I have made for praise” (1 Chr 23:3-5). 4,000 were not going to accompany singing. Instead, they were going to offer praise to God with their instruments.

We understand that the Old Testament is no longer binding on us today, however: There is an important principle at work here-Instrumental music in the Old Covenant wasn’t an aid to worship. Instrumental music wasn’t used under the Law of Moses because it helped the Israelites sound better. Instead, the playing of instruments was in and of itself worship.

The instrument was commanded in the Old Testament.

Hezekiah “stationed the Levites in the house of the LORD with cymbals, harps, and lyres, according to the commandment of David and of Gad the king’s seer and of Nathan the prophet, for the commandment was from the LORD through his prophets” (2 Chr 26:25). “Sing aloud to God our strength; shout for joy to the God of Jacob! Raise a song; sound the tambourine, the sweet lyre with the harp. Blow the trumpet at the new moon, at the full moon, on our feast day. For it is a statute for Israel, a rule of the God of Jacob” (Ps 81:1-4).

These principles from the Old Testament establish that:

The instrument is far more than an aid to worship-it is worship.

An aid simply assists someone in fulfilling a task. For example, glasses can help one see, a cane can aid someone’s walking, or a hearing aid can assist one’s hearing. Someone who is wearing glasses is still seeing, someone who uses a cane is still walking, someone sing a hearing aid is still hearing.

If someone were to declare that instrumental music today is part of our worship to God, he would only partially be consistent with the Old Testament principle. Granted, he would no longer be arguing that the instrument is an aid.

This Argument Misunderstands the Nature of Worship

When John saw the glorified Christ, the four living creatures and the twenty-four elders fell before him and sang a new song: “Worthy are you to take the scroll and to open its seals, for you were slain, and by your blood you ransomed people for God from every tribe and language and people and nation, and you have made them a kingdom and priests to our God, and they shall reign on the earth” (Rev 5:9-10). The “new song” is interesting in the way it presents Christ’s work of salvation. Humans are mentioned throughout this hymn-we have been ransomed, made kingly priests, and we shall reign on the earth. However, humans are far from the focus of this praise. It is the work of Christ that is praised: “You were slain,” “By your blood you ransomed,” “You have made them a kingdom and priests.” These heavenly beings do speak of our salvation, but the focus is entirely on Christ, not on those who have been redeemed. Our praise needs to center on our God, not on us!

Paul speaks of pagans who became more interested in themselves than in God: “Although they knew God, they did not honor him as God or give thanks to him, but they became futile in their thinking, and their foolish hearts were darkened. Claiming to be wise, they became fools, and exchanged the glory of the immortal God for images resembling mortal man and birds and animals and creeping things” (Rom 1:21-23). Instead of honoring God as Creator, these pagans did what seemed best to them.

God is the only appropriate object of worship. When John fell down at the feet of the angel who had shown him the Revelation, the angel said, “You must not do that! I am a fellow servant with you and your brothers who hold to the testimony of Jesus. Worship God” (Rev 19:10). When Satan attempted to get Jesus to worship him, the Lord replied, “Be gone, Satan! For it is written, ‘You shall worship the Lord your God and him only shall you serve’” (Mt 4:10). When I do anything that takes the focus off God and on me, I’m not worshiping properly.

There is nothing at all wrong with singing the best that we can. In fact, I believe that we need to sing to the best of our ability and bring our absolute best to God. God has always required the best and we dare not give him anything but the best. However, we dare not get to wrapped up in how worship pleases us-we need to be wrapped up in how worship pleases God.

Alan Walworth probably captures it best when he writes, “What wisdom is gleaned for worship planners from these prototype churches and their surveys of unchurched America? Keep the mood and tempo of worship upbeat. Resist the minor keys, they’re too somber. Discard ‘churchy’ anthems and hymns. . . . Provide sermons with catchy “How to . . .” titles. Encourage casual dress and informal ambiance. Drive the beat of worship with percussion, conclude songs with a flourish of high notes and loud dynamics (no one feels compelled to clap after slow or soft music). . . . We don’t allow any music in our church to which you couldn’t roller skate. The new model for efficiency and friendliness and enthusiasm is Walt Disney World.”

This Argument Misunderstands the Nature of an Aid

However, instrumental music has nothing to do with the purpose for which we sing.

We sing in order to praise God.

Singing is a way that we teach one another.

“Let the word of Christ dwell in you richly, teaching and admonishing one another in all wisdom, singing psalms and hymns and spiritual songs, with thankfulness in your hearts to God” (Col 3:16). An instrument cannot teach me a single thing. In fact, when I’ve been places where the instrument was used, it seems to be an impediment to teaching. It is often difficult, if not impossible, to hear the words for the banging of the instrument.

Aids are used in much of our work in the church. This pulpit is aiding me by allowing me a place to rest my notes and Bible. The pews are aiding you by providing you a place to sit while I preach.

When God gives a command, we are free to use whatever is necessary to carry out that command.

“Make yourself an ark of gopher wood. Make rooms in the ark, and cover it inside and out with pitch. This is how you are to make it: the length of the ark 300 cubits, its breadth 50 cubits, and its height 30 cubits. Make a roof for the ark, and finish it to a cubit above, and set the door of the ark in its side. Make it with lower, second, and third decks” (Gen 6:14-16).

If Noah wanted to obey God, he had no choice in many of the particulars. He was to build the ark of gopher wood-nothing else. He was to make it to its exact specifications. If Noah had made the ark a cubit or two longer, do you honestly believe it would have floated? What if Noah had not made three decks? What if he decided that he wanted four decks?

However, what tools did Noah need to complete the ark’s construction? God didn’t tell Noah what type of hammer to use, what size nails to use, etc. Therefore, Noah was free to do what seemed best to him. The hammer and nails were aids in carrying out the command.

When Jesus gave the Great Commission, he left many particulars up to his disciples.

We are to go and make disciples of all nations, but Jesus didn’t tell us how to go. Paul went by boat, he walked, the Holy Spirit caught Philip and carried him to Azotus after the eunuch’s conversion. We give to the In Search of the Lord’s Way TV program; I have had people from Iran reading sermons on my website-I can’t go there and preach publicly, but I am preaching the Word in Iran!

Some might well say that an instrument doesn’t really change the nature of singing. Or, they might say, it doesn’t change it enough to preclude the use of the instrument. Oh, contraire!

Instrumental music and vocal music are different kinds of music. Someone might say that the distinction between instrumental and vocal music is a man-made distinction. No, I can find that distinction in Scripture. “The whole assembly worshiped, and the singers sang, and the trumpeters sounded” (2 Chr 29:28). A distinction is made in that passage between singing and playing the trumpet. “The song was raised, with trumpets and cymbals and other musical instruments, in praise to the LORD” (2 Chr 5:13). Notice that we are told the song was accompanied by musical instruments.

Let us commit ourselves to never using an aid that harms, rather than helps, the praise of God.