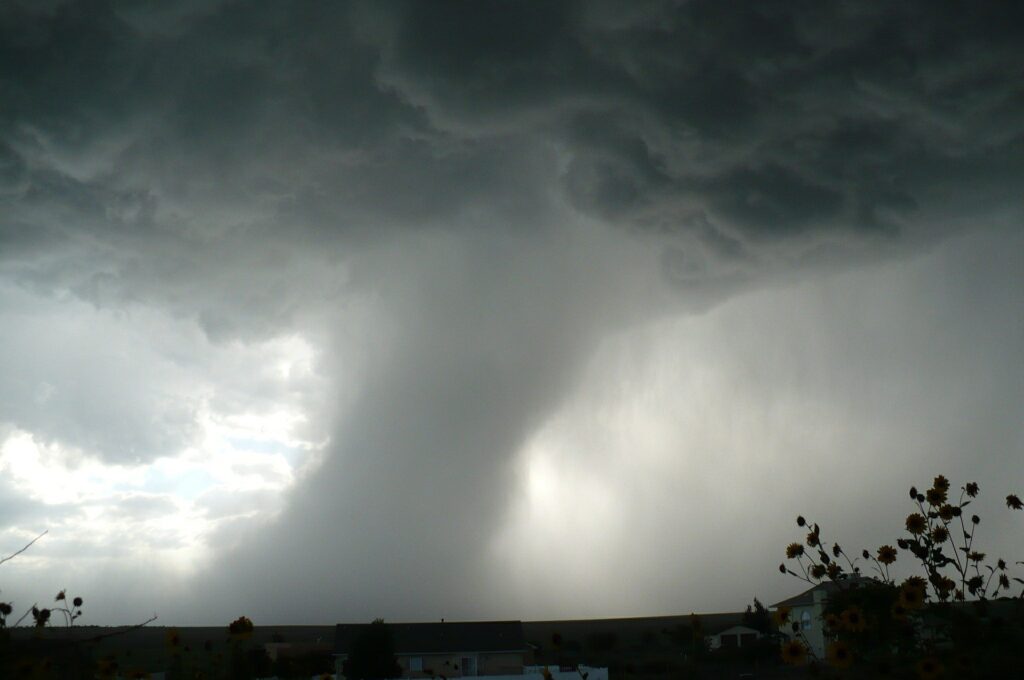 My first memory is sitting on the back porch with my dad on June 30, 1977. As Dad and I sat on the porch, the sky turned an eerie color, and the tornado sirens went off. Dad grabbed me, ran in the house, and yelled for Mom to get my brother (my baby brother hadn’t been born yet) and to get to our neighbors’ basement.

A tornado hit our subdivision that night. Our house was unscathed. But, while Mom, Aaron, and I huddled with our neighbors in the dark, Dad and several other men spent hours searching for victims in a trailer park just down the road from our house. In all, six people were injured in that trailer park.

As you can imagine, that night had a profound impact on a boy who wasn’t quite 3. I have been terrified of tornadoes since that night. As a kid, I would have nightmare after nightmare about tornadoes. I can’t tell you how many times I would get my pillow and blanket and go sleep in the floor next to Mom. Honestly, it’s not uncommon for me still to have nightmares about tornadoes. Because a tornado’s coming through my neighborhood is my very first memory, I am terrified of them to this day.

We’re not the first people to deal with fear. As the Israelites stood at the Red Sea and saw the Egyptians behind them, “they feared greatly” (Ex 14:10). When the disciples saw Jesus’s walking on the water, they were terrified (Matt 14:26). When the soldiers guarding Jesus’s tomb saw the angel descend from heaven, they “trembled and became like dead men” (Matt 28:2-4). On the day Jesus was resurrected, the disciples were meeting secretly behind closed doors “for fear of the Jews” (Jn 20:19).

The Jewish Exiles in Babylon were fearful. They were about to go back home on a long and arduous journey; they would be uprooted from everything they knew. In this morning’s text, Yahweh told his people that though they were facing much they had no reason to fear. The divine message for the Exiles—and for you—is this: “With God there is no fear!”

“But now thus says the LORD.” Isaiah’s message of hope is the truth of God.

God had “created” and “formed” the nation of Israel. These verbs—along with the verb “made” in verse 7—are used in Genesis 1-2 to describe God’s creation of everything. Just as God used great power in creating the cosmos, he used great power when he took an old man and woman and made them a nation.

Israel did not need to fear, for God had redeemed them and called them by name. God redeemed his people when he brought them out of Egypt with a mighty hand. To be called by one’s name in antiquity meant to belong to someone. In this context, God was saying that the Israelites were his children—they belonged to him.

Passing through water and fire were well-known euphemisms for going through a trial.

God’s message was that no matter what trial his people faced, he would be with them. God had been with Israel in her past struggles. When his people stood at the Red Sea, God opened the waters and the people crossed on dry ground. God preserved his people in the wilderness: “Your clothing did not wear out on you and your foot did not swell these forty years” (Deut 8:4). In the period of the Judges, when the people would suffer and cry out to God, Yahweh would raise up a deliverer.

God would give Egypt, Cush (Ethiopia), and Seba for his people’s ransom. The Persians, in other words, would overcome these nations and allow the Israelites to go free.

God would rescue his people because he loved them and they were precious to him.

God would gather his people “from the end of the earth.” God had promised through Moses that if he were to exile the people because of their sin, he would bring them back to the Promised Land when they repented (Deut 30:1-4). As Isaiah made clear, not only is God keeping his promise, but he is using great power to bring his people back to Canaan from Babylon.

God had created Israel for his glory—the nation’s existence and their divine blessings would proclaim God’s glory, majesty, and might to the world.

“With God there is no fear!” That was the divine message to the Exiles in Babylonia as God prepared to bring them home.

But you aren’t in Babylonia, and you aren’t fixing to take possession of Jerusalem. You’re living at a time when a virus threatens society and your very life. Is it still the case that “With God there is no fear?” God’s truth all these millennia after Isaiah prophesied is still: “With God there is no fear!” To his fearful disciples, Jesus said, “Let not your hearts be troubled. Believe in God; believe also in me” (Jn 14:1). “He has said, ‘I will never leave you nor forsake you.’ So we can confidently say, ‘The Lord is my helper; I will not fear; what can man do to me?’” (Heb 13:5-6).

When we see reasons all around us to be afraid—COVID, cancer, a struggling economy, families in conflict—how can we find the assurance God promised to his people? Let’s take this morning’s text and apply its truths practically.

Do you want to be free of fear? Well, here’s what you need to do:

One: You Must Recognize God.

In other words, you need to understand who God is so that you understand why you have no reason to fear. Who is God?

God is presented in Isaiah 43 as the Creator. He created, formed, and made Israel a nation. As we noted, those three verbs are used throughout the Creation narrative for God’s formation of the cosmos. Here’s the point: If God can create the cosmos from nothing and create a mighty nation from a hundred-year-old man and a ninety-year-old woman, he can bless you in the midst of your struggles.

Think about all God has done for his people in trouble—the Exodus from Egypt, the crossing of the Red Sea, the Conquest of Canaan, the slaying of Goliath, the feeding of the five thousand, and the Resurrection of Jesus the Christ. If God can do such great miracles, can he not also help you in your struggles? Do yourself a favor this week: Think seriously about what terrifies you and contemplate God’s great power. Ask yourself if you really need to be afraid when you serve the Creator of all.

God is the Purchaser.

God was Israel’s redeemer—he purchased them from the Babylonian Exile. He sold the nations of Egypt, Ethiopia, and Seba to buy his people; those countries were overrun by the Persians. God was saying that he would do whatever was necessary to redeem his people.

God has redeemed you, too. “You were ransomed from the futile ways inherited from your forefathers, not with perishable things such as silver or gold, but with the precious blood of Christ” (1 Pet 1:18-19). The ransom paid for you wasn’t some African nations but the precious blood of Christ. Since God was willing to give his Son’s blood for your ransom, doesn’t it only make sense that he will do whatever he can to bless you in calamity?

God has never promised to remove trouble from your life. Jesus suffered and died. If the Son of God faced suffering, you shouldn’t expect to be immune from suffering yourself.

However, God will be with you in your suffering. After Jesus suffered and faced Satan in the wilderness, “angels came and were ministering to him” (Matt 4:11). Paul suffered for the faith, but God was with him.

I don’t know what life will throw at you. Your worst fears in all the world may every one come true. However, God will be present in all your troubles and bless you through them.

When you face calamity, you can rest assured that God loves you. Psalm 8:3-4. Think about that for a moment: The Creator of everything loves you. He knows your name. He knows your deepest fears. And he loves you. No matter what comes in life, know that the Creator loves you and be rid of your fear.

Not only do you need to Recognize God (know who he is), but you also must:

Two: You Must Reside with God.

Please understand that I’m not at all trying to diminish the very real suffering in this world. However, I do want you to look at your suffering in the light of eternity. When you are in glory, any calamity you’ve faced in this life will seem like nothing. Knowing you are God’s child and that glory awaits you should fill you with hope and joy instead of fear.

However, being a child of God means that you do what is right and love your brother: “By this it is evident who are the children of God, and who are the children of the devil: whoever does not practice righteousness is not of God, nor is the one who does not love his brother” (1 Jn 3:10). If you aren’t living right this morning, you aren’t God’s child—no matter what you say. If you aren’t truly God’s child, you have every reason to fear—instead of glory, eternal damnation awaits you. Are you a child of God full of hope?