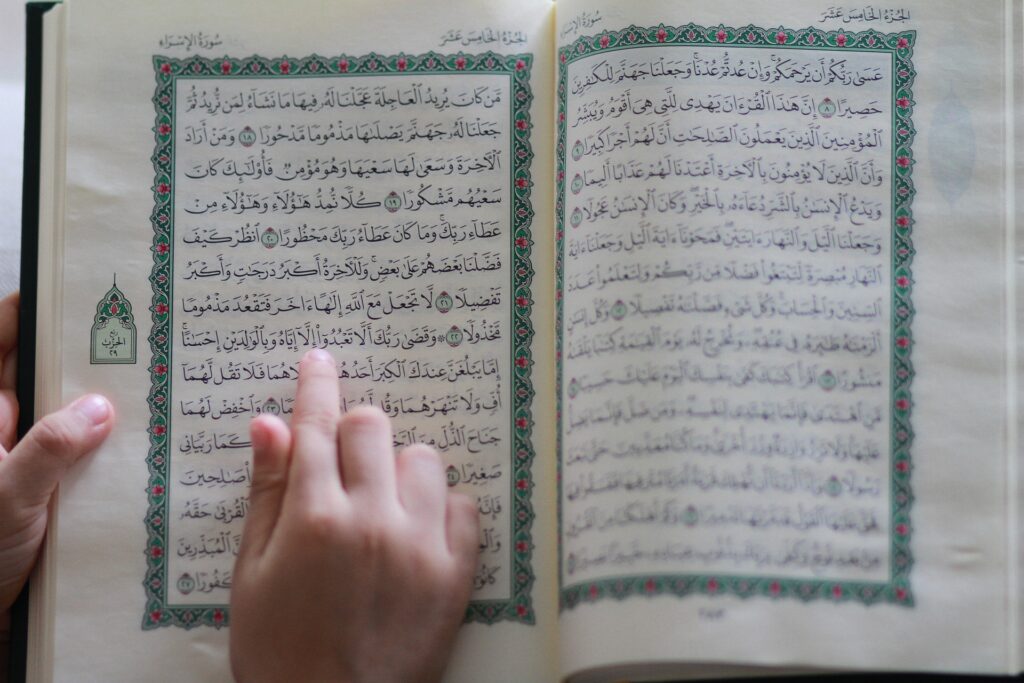 The Bible and the Qur’an

The format of the Qur’an is different than that of the Bible. The Qur’an is divided into surahs (or chapters). It contains 114 surahs. The longer surahs come first and the shorter surahs come last. The surahs range in length from 287 verses to 3 verses. The Qur’an is rhymed prose, while the Bible contains several literary genres. The Qur’an was originally written in Arabic and most Muslims despise translations of it. Surah 43:4 reads, “Surely it is in the original of the Book with Us, truly elevated, full of wisdom.”

Most Muslims do not like the differences between the Qur’an and the Bible.

Some ethical teachings of the Qur’an are different than those of the Bible.

If a husband believes his wife may leave him, he is permitted to beat her. Surah 4:34 reads, “And (as to) those on whose part you fear desertion, admonish them, and leave them alone in the sleeping-places and beat them; then if they obey you, do not seek a way against them; surely Allah is High. Great.” Yet, the Bible teaches that husbands should love and respect their wives. Ephesians 5:28-29.

The Qur’an tells biblical stories differently than the Bible.

Mohammad mistook Mary, the mother of Jesus, for Miriam, the sister of Moses. Surah 19:28 reads, “O sister of Haroun (the Arabic version of Aaron)! Your father was not a bad man, nor was your mother an unchaste woman.”

The Qur’an completely retells the story of Jesus Christ.

“People of the Book, do not exaggerate in [practicing] your religion and tell nothing except the Truth about God. Christ Jesus, the son of Mary, was merely God’s messenger and His word which He cast into Mary, and a spirit [proceeding] from Him. Believe in God [Alone] and His messengers, and do not say: ‘Three!’ Stopping [it] will be better for you. God is only One God; glory be to Him, beyond His having any son!” (Surah 4:171).

Mohammad believed the Christian Trinity to consist of the Father, Christ, and Mary. “And when Allah will say: O Isa [Jesus] son of Marium! did you say to men, ‘Take me and my mother as two gods besides Allah” (Surah 5:116). The text goes on to say that Jesus will tell Allah that he said no such thing. This caused him to think that Christians believed in three gods. “Certainly they disbelieve who say: Surely Allah is the third (person) of the three; and there is no god but the one God” (Surah 5:73). The Bible teaches that there is only one God (1 Tim. 2:5). Yet, there are three in the Godhead (Matt. 28:19).

The Qur’an clearly says that Jesus was not the Son of God. “He [Jesus] was naught but a servant on whom We bestowed favor” (Surah 43:59). “The Christians say: The Messiah is the son of Allah; these are the words of their mouths; they imitate the saying of those who disbelieved before; may Allah destroy them; how they are turned away!” (Surah 9:30). “It beseems not Allah that He should take to Himself a son, glory be to Him; when He has decreed a matter He only says to it “Be,” and it is” (Surah 19:35).

The Qur’an also teaches that Jesus did not die on the cross. “And their saying: Surely we have killed the Messiah, Isa son of Marium, the apostle of Allah; and they did not kill him nor did they crucify him, but it appeared to them so (like Isa) and most surely those who differ therein are only in a doubt about it; they have no knowledge respecting it, but only follow a conjecture, and they killed him not for sure” (Surah 4:157; other verses seem to suggest that maybe Jesus did die on the cross, see Anderson, 101). Most Muslims believe this means someone who looked like Jesus was crucified in his place and Jesus was caught up into heaven (Anderson, 101). The Bible obviously does teach that Jesus died on a cross (cf. Matt. 27:32ff.; Mk. 15:21ff.; Lk. 23:26ff.; Jn. 19:17ff.).