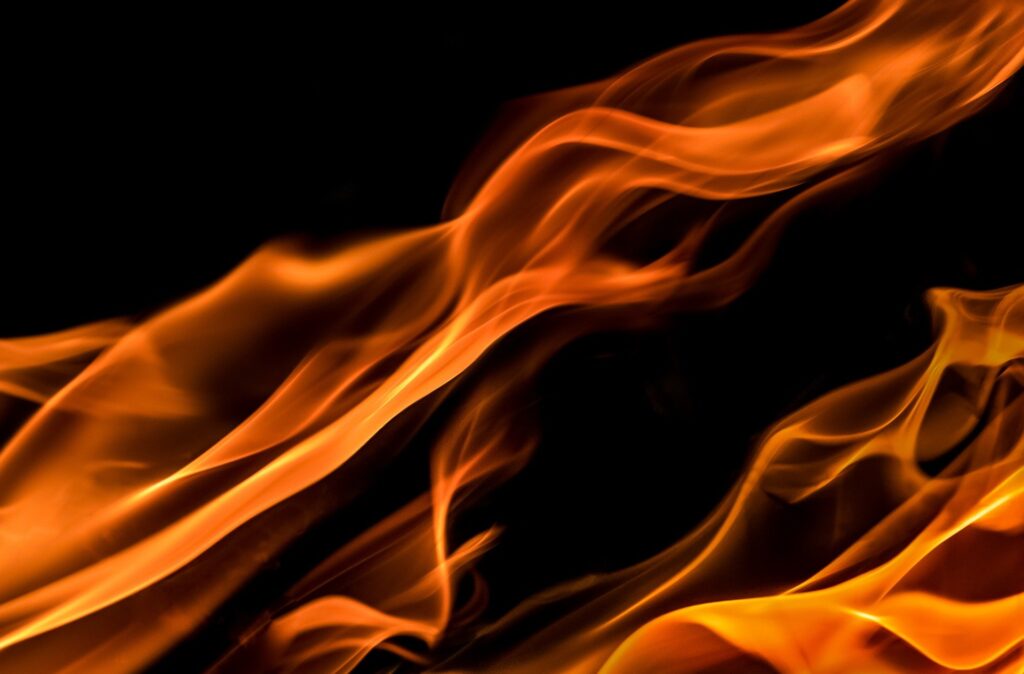 A few years ago, a sweet lady came to me with tears in her eyes and asked if she could meet with me a few minutes before Bible study. We stepped into the nursery right there in the foyer of the church building and shut the door.

Crocodile tears began spilling down her checks, and she said, “Justin, do you know what’s happened?” No, Justin did not know what had happened, but Bonnie shared the story. A congregation met about ten miles or so from where we met. Bonnie’s son was an elder in that congregation just down the road. Jerry, Bonnie’s son, had been on vacation the week before, and while Jerry was on vacation, the other elders decided to go the way of the community church. They came together with three denominational groups and started rotating where they would worship on Sunday evenings. Yes, the instrument was used. Yes, preaching was about coming together in spite of our differences. No, an invitation to be immersed into the death of Jesus was not given; in fact, the other churches involved would deny that biblical truth. The morning that Bonnie came to me, Jerry went before the neighboring church and resigned as an elder. The following Sunday, Jerry and his family would place membership with us.

I am blessed; I have never faced such challenges in my life. Whether it was growing up or professional ministry, I’ve never needed to take a hard stand because error was creeping in. As long as it’s okay with you, I’d really like to keep it that way.

Some of you have not been blessed in that way. I know that some of you had to leave congregations behind because of error coming into the body. I know some of you are concerned about family members who will be needing to take a stand for the truth. I know that many of us have had to walk out of church assemblies because there was error in one way or another: mostly over instrumental music and women’s roles.

With culture infiltrating the church at an alarming rate, what are we to do? We need to understand that this phenomenon is as old as man himself. While Moses is at the summit of Mount Sinai, the Israelites, following the culture of Egypt, erected a golden calf. Several years after the Israelites had been in the Promised Land, they gathered to Samuel and said, “Now appoint for us a king to judge us like all the nations” (1 Sam 8:5). Judaizers, because of their deep-rooted culture, demanded that Gentile Christians submit to circumcision. We need to see the long history of those who blur culture and godliness for two reasons:

As culture creeps into the church at an alarming rate, how should we respond? We fix our eyes on Jesus. Culture changes, every generation has its fads, but Jesus remains the same.

Why Should We Be Alarmed By Churches Adopting Culture?

One downside to everyone at the gym knowing that I preach here is that they want to tell me all that they’re doing in church. One friend is the worship leader for the contemporary service at a church not far from us. He plays his lead guitar and helps the entire congregation to worship. “Justin,” he has said, “you’ll never believe what God is doing here. This worship appeals to so many, and they’re coming to the Lord.” Another reports that where he worships they have just hired a new preacher. I knew when this guy was interviewing, so I talked with my friend and asked what the candidate had preached about. The answer? “He mostly just talked about himself so that we could get to know him better.” The following week the church voted as to whether or not to hire this minister. He was elected unanimously.

Let me tell you: There’s only so much you can say, “That’s interesting.” Yet, what if we could change some things we do to draw people to Jesus? What if we could gather up a band that would play upbeat music and millennials would flock to our worship? What if we started having skits during our worship service? What if the elders fired me and hired a young lady who could just touch your heart in a special way? Does it really matter? It most certainly does. Think with me:

It matters because culture and following God have never mixed.

As His people were preparing to enter the Promised Land, God told them to destroy all the idols left behind (Ex 32:23-24). The people did not follow the Lord’s instructions but allowed those cultural icons to remain. Thus, the people were led into the sin of idolatry over and over again.

The Israelites wanted to fit in culturally, so they asked for a king “like all the nations” (1 Sam 8:5). I really would love to be able to go back in time and ask them how that worked out. Because the people wanted a king, they faced civil war, they were led into sin by those kings, and they faced divine retribution for their sin.

It matters because the people of God have always stood with the Lord over and against culture.

“Noah was a righteous man, blameless in his generation. Noah walked with God” (Gen 6:9). The culture in Noah’s day was so wicked that God destroyed all of mankind (save eight) with water. Because Noah walked with God instead of his contemporaries, he and his family found salvation on the ark.

Shadrach, Meshach, and Abednego refused to bow down to Nebuchadnezzar’s golden image. Everybody else was doing it; it was the culturally acceptable thing to do. Yet, they were far more concerned with honoring the King of kings than honoring the king of the world’s lone superpower.

It matters because Jesus did not conform Himself to the culture of the day.

At the conclusion of the Sermon on the Mount, the people realized that Jesus had taught “as one who had authority, and not as their scribes” (Matt 7:29); his teaching style was not that of His contemporaries.

The Sermon on the Mount itself was a departure from cultural norms. Adultery becomes not just a physical act but an issue of the heart. Instead of praying on the street corner to be seen by all, Jesus’ people pray in private. If a soldier compelled me to go one mile, I was to go two. Everyone else only went one, but Jesus tells me to go another mile.

It matters because Jesus led His disciples in a rejection of mirroring culture.

Under His direction, the disciples did not wash their hands before they ate (Matt 15:1-9); the Pharisees and scribes believed that cultural norm should have been practiced.

It matters because Jesus’ kingdom is not of this world.

The Jews expected a king who would come and overthrow the Roman Empire; that was their expectation and their hope. Jesus, however, came to this world to establish a different kingdom. When Pilate asks Jesus if He were a king, the King of kings replies, “My kingdom is not of this world. If my kingdom were of this world, my servants would have been fighting, that I might not be delivered over to the Jews. But my kingdom is not from the world” (Jn 18:36). Jesus’ kingdom transcends the culture of our day and leads us to a different set of values.

It matters because our brethren chose persecution over conforming to culture.

When instructed to preach no more in the name of Jesus, the apostles chose imprisonment (Acts 4-5). Paul left his cultural Judaism behind and faced persecution (2 Cor 11:16-29). The church in Pergamum refused to deny their faith even in the days of Antipas (Rev 2:13).

It matters because God has called upon us to live above culture.

“I am the LORD your God. Consecrate yourselves therefore, and be holy, for I am holy” (Lev 11:44); Peter reminds us that God’s expectation still stands (1 Pet 1:16). Since God’s character does not change (Heb 13:8), Christians honor God by living above culture.

It matters because Christians are instructed to think differently from their culture.

“Do not be conformed to this world, but be transformed by the renewal of your mind” (Rom 12:2). “Set your minds on things that are above, not on things that are on earth” (Col 3:2). We want to have different thinking, for “the world is passing away along with its desires, but whoever does the will of God abides forever” (1 Jn 2:17).

You start with Jesus.

Jesus “is before all things” (Col 1:17); therefore, we start with Him. As we start with Jesus, we make it our aim to please Him (2 Cor 5:9). “Jesus Christ is the same yesterday and today and forever” (Heb 13:8); culture will change, but Jesus never will.

Why do we start with Jesus?

How do we practically start with Jesus?

Jesus left “you an example, so that you might follow in his steps” (1 Pet 2:21). If we claim to follow Jesus, we must walk as He did (1 Jn 2:6). Read through the Gospels this week and pay particular to how Jesus rose above culture. See how He spoke with a Samaritan woman, how He reached out and touched a leper, and how He healed on the Sabbath. Jesus did not allow culture to dictate how He lived.

Jesus knew why He was on this earth. Philosophers have pondered for millennia the simple question: “What are we doing here?” Jesus knew His purpose, and we can know our purpose. “The end of the matter; all has been heard. Fear God and keep his commandments, for this is the whole duty of man” (Eccl 12:13). We’re not here to make a name for ourselves, we’re not here to make the world a better place. We’re here to honor our God.

You know where you stand.

“In your hearts honor Christ the Lord as holy, always being prepared to make a defense to anyone who asks you for a reason for the hope that is in you” (1 Pet 3:15). Search your heart. Understand your purpose in this world. Realize why you don’t fall down and worship at the altar of our culture.

Pray for the brotherhood.

It hurts when we see brethren whom we dearly love move from the faith “that was once for all delivered to the saints” (Jude 3). The Lord promised that His kingdom would last forever (Dan 2:44). I believe since Pentecost there has always been a faithful remnant, and there shall be a remnant until Jesus comes again.

Be careful with modernity.

We must be careful that we do not allow modernity to influence our lives and hearts. Does what we watch on television influence our thinking for evil? Do we have so many conveniences that we want nothing but a life of ease? Do we find that we cannot worship the Lord as faithfully during NFL season?

Be encouraged by saints of old.

Think about the great servants of old. Remember Abraham who left his cultural norms in Ur to go where God would lead him. Remember Moses who left life as a royal to lead God’s people from Egypt. Remember Daniel and his three companions who refused to eat the king’s food. Remember John the Baptizer who stood up to Herod’s adulterous marriage. Remember Paul who gave up all he had worked for to follow Jesus.

No, their lives were not easy. Some even lost their physical lives, but God blessed those who followed Him. Yet, they looked “forward to the city that has foundations, whose designer and builder is God” (Heb 11:10). Are you looking for that city?