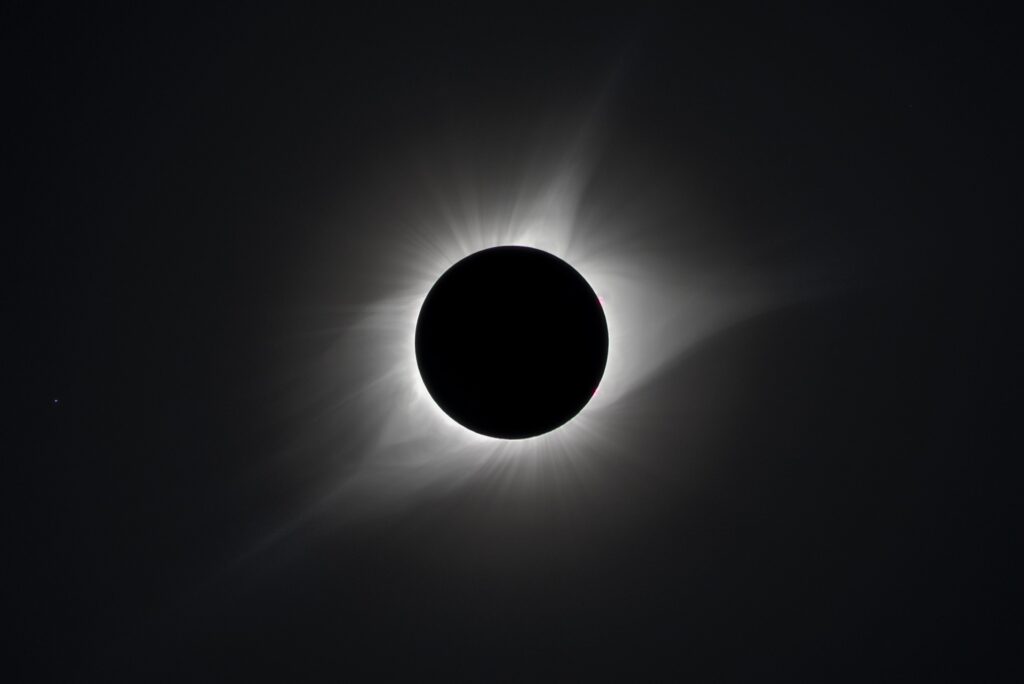 French mathematician Lecompte de Nouy examined the laws of a probability for a single molecule to be formed by chance. De Nouy found that, on average, the time needed to form one molecule would be billions of years. But, he continued, “Let us admit that no matter how small the chance it could happen, one molecule could be created by such astronomical odds of chance. However, one molecule is of no use. Hundreds of millions of identical ones are necessary. Thus we either admit the miracle or doubt the absolute truth of science.”

Whatever the odds may have been, we know that no chance occurred in the formation of this universe. Moses informs us tonight’s text that God used his great power to create this universe. Tonight, we’re not so interested in discussing the evidences for the Creation. Instead, we wish to hear “Creation’s Voice” to learn about God.

“In the beginning, God created the heavens and the earth.” This verse likely serves as a heading for the entire passage. Moses declares that God made all things and then he outlines how he made all things. This is an important sentence text with which to begin the record of God’s activities.

It’s an important text, because Scripture does not begin with any evidences of God’s existence. The Bible simply begins with an affirmation that God is. Likely, part of the reason there is no evidence for God presented here is that those who first read this Book needed no evidence. They saw God’s miraculous workings every day. God had delivered them across the Red Sea, had given them manna and quail in the wilderness, and was about to lead them into the Promised Land.

Another reason Scripture provides no evidence for God’s existence is the simple nature of Scripture. Scripture is quite straightforward and retells events without any embellishment. Because God is there isn’t a need to provide evidences of his existence.

We know without doubt that God is. Like many have said before me, I do not have enough faith to be an atheist. When one looks at this universe we inhabit, how can anyone logically say that there is not a God? “The heavens declare the glory of God, and the sky above proclaims his handiwork” (Ps 19:1). “His invisible attributes, namely, his eternal power and divine nature, have been clearly perceived, ever since the creation of the world, in the things that have been made” (Rom 1:20). Is it any wonder that the psalmist declares, “The fool says in his heart, ‘There is no God’” (Ps 14:1)?

We know that God existed long before this universe did. As Moses blessed the tribe of Asher before his death, Moses says, “The eternal God is your dwelling place, and underneath are the everlasting arms” (Deut 33:37). The twenty-four elders around God’s throne praise him saying, “We give thanks to you, Lord God Almighty, who is and who was, for you have taken your great power and begun to reign” (Rev 11:17).

This is also an important text, for it declares that God made the world. It wasn’t just anyone who made the world, but it was the Eternal God who did so. We understand it was our God who made the world. “In six days the LORD made heaven and earth, the sea, and all that is in them” (Ex 20:11). “Have you not known? Have you not heard? The LORD is the everlasting God, the Creator of the ends of the earth” (Is 40:28). Some pantheistic religions believed in different gods who created different parts of the universe. It might be that the supreme “god” did not make the world at all. Moses informs us that isn’t our God–it is he who made all that is.

What we’ve said thus far is all well and good–it is, after all, the truth of God. Yet, I’m confident that all of us know this truth about God. Why spend time this morning discussing it? Because of the secular world around us, we need to be reminded that God is the Creator. In 2000, a series of studies by psychologist Margaret Evans showed that children are learning organic evolution in schools. Her studies showed that school children aged 8 to 10 believed almost exclusively in Creation. But, school children aged 10.5 to 12 believed almost exclusively in evolution. We must understand that we live in a pluralistic society, be prepared to defend our faith, and be prepared to defend the faith of our children!

Because we know that it was God who created the heavens and the earth, we understand that the heavens and the earth have a purpose. That purpose–like the purpose of our lives–is the glorification of God: “The heavens declare the glory of God, and the sky above proclaims his handiwork” (Ps 19:1). The earth does not stand here by accident, but by design–that it might testify to the glory of God.

That God has existed since before “the beginning” informs us that God is not bound by time. This implies that God is able to see from the beginning to the end of time and bring history to its proper conclusion. Last Sunday night, we demonstrated from Ecclesiastes how God is doing that very thing. The fact that God will exist when this world is no more implies that he has the power to give life to us when this world is no more. In fact, God will perform another great act of creation when this world is destroyed: “According to his promise we are waiting for new heavens and a new earth in which righteousness dwells” (2 Pet 3:13). In that new heavens and earth, God will give us new life: “Behold, the dwelling place of God is with man. He will dwell with them, and they will be his people, and God himself will be with them as their God. He will wipe away every tear from their eyes, and death shall be no more, neither shall there be mourning nor crying nor pain anymore, for the former things have passed away” (Rev 21:3-4).

Man, like the earth, was also created in two steps. “The LORD God formed the man of dust from the ground and breathed into his nostrils the breath of life, and the man became a living creature” (Gen 2:7). God made Adam, but Adam was a lifeless corpse–just like the bodies at the funeral home. Then, God breathed into Adam’s nostrils and life filled that body.

What process was involved in allowing the earth time to cool for life to begin? The Scriptures say that “the Spirit of God was hovering over the face of the water.” The idea of hovering here reminds us of a bird brooding over her nest. A bird broods over her nest in order to prepare the eggs to hatch. The Spirit of God is here seen as the One preparing the earth to be inhabited by life.

Why was it the Spirit who was brooding over the face of the waters? Simply put, it is the Spirit who gives life. The Hebrew term for “spirit” here can refer to breath. In Psalm 33:6, the term is used of the creative “breath of God”: “By the word of the Lord the heavens were made, and by the breath of his mouth all their host.” As the bones had come together in the Valley of Dry Bones, Ezekiel records: “And I looked, and behold, there were sinews on them, and flesh had come upon them, and skin had covered them. But there was no breath in them” (Ezek 37:8).

What does “A BROODING GOD” tell us of our Creator?

God named the light Day and the darkness he named Night. God’s naming of the light and darkness indicates his dominion over his creation. Man has dominion over the animals: “God said, ‘Let us make man in our image, after our likeness. And let them have dominion over the fish of the sea and over the birds of the heavens and over the livestock and over all the earth and over every creeping thing that creeps on the earth’” (Gen 1:26). The man named all the animals: “The man gave names to all livestock and to the birds of the heavens and to every beast of the field” (Gen 2:20). Thus, the simple act of naming the light and darkness again demonstrates God’s sovereignty over the things he has made.

What do we learn from A BREAKING GOD? We learn the power of God’s Word–God’s word spoke this universe into existence. The Word of God has great power. “Because you have spoken this word, behold, I am making my words in your mouth a fire, and this people wood, and the fire shall consume them” (Jer 5:14). “The word of God is living and active, sharper than any two-edged sword, piercing to the division of soul and of spirit, of joints and of marrow, and discerning the thoughts and intentions of the heart” (Heb 4:12).

Some may say that there is a difference between the word God spoke at Creation and Scripture as the Word of God. However, the only difference seems to be what God spoke, for the Scriptures come from the mouth of God. Jesus, quoting from the Old Testament, says as much: To Satan, the Lord says, “Man shall not live by bread alone, but by every word that comes from the mouth of God” (Matt 4:4). “All Scripture is breathed out by God and profitable for teaching, for reproof, for correction, and for training in righteousness” (2 Tim 3:16). In Greek, “breathed out by God” or “given by inspiration of God” is one word, a combination of the words “breath” and “God.” The idea is that every word of Scripture was uttered directly from God’s mouth. Since the very utterance of God had enough power to create all that is, doesn’t it stand to reason that the utterance of God’s command to man has great power?

Have your responded to that powerful Word of God?