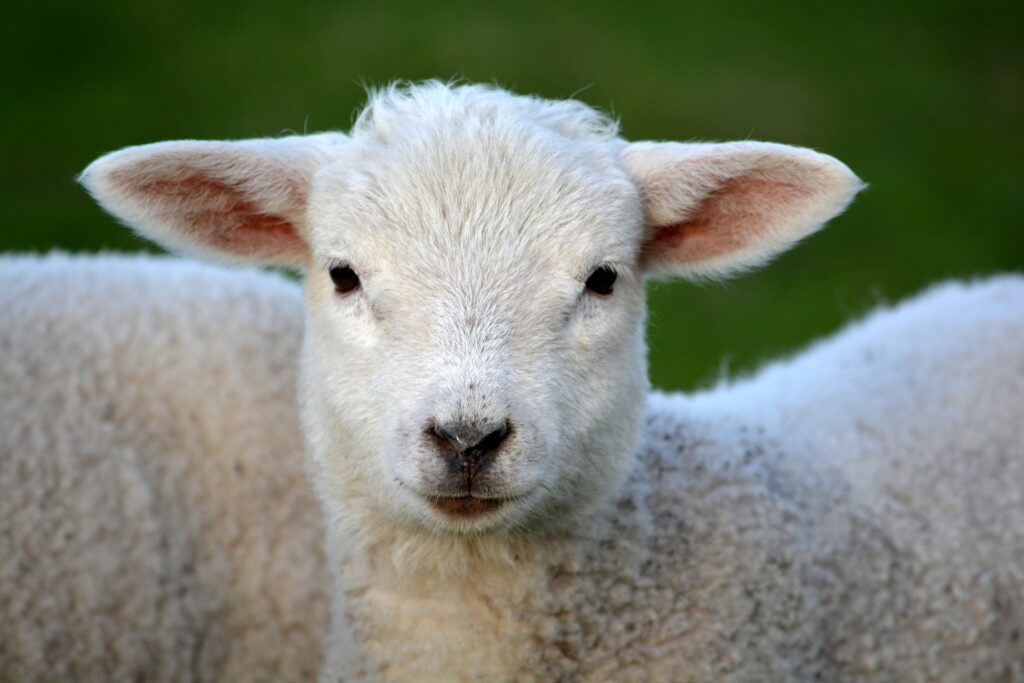 As the Death Angel was preparing for his journey through Egypt, a firstborn son asked his father to make sure that blood had been applied to the doorframe as Moses had instructed. The father told his firstborn not to worry about the blood, for his brother had taken care of it earlier. “Just be certain that Josiah put it there,” the boy replied. “OK,” said the father. The two of them went to the doorpost and found that no blood was there. The father quickly applied the blood to the doorframe and the son slept easily that night.

That fictional story illustrates just how important blood is in the scheme of redemption. In tonight’s text, God promises that when he sees the blood on the doorposts, he will pass over the Israelites’ homes (v 13). Tonight, we wish to go back several thousand years to that night the Death Angel made his journey through Egypt. In particular, we want to look at the lamb the Israelites were to have that night. What do we learn about God’s lamb?

The lamb the Israelites were to get would forever change them: “This month shall be for you the beginning of months. It shall be the first month of the year for you.”

The Israelite calendar would forever be tied up with God’s lamb. There are a couple important theological concepts at play here:

God, with this sacrificial lamb, is making everything new.

For 400 years, the Israelites had been in captivity in Egypt. Now, God was going to give his people a new era of freedom.

Time is centered around the activity of God.

Every time the Israelites would hear what year it was, they would remember what God had done.

All of time is centered around what God has done. Ecclesiastes 3:1. The Israelites kept a weekly Sabbath because God created the world in 6 days and rested on the 7th. We assemble on the first day of the week, instead of the Sabbath, because God raised his Son on the first day of the week. All of time is currently moving to the final culmination of God’s activity when he sends his Son back to judge the world.

The Israelites were only to take a lamb if their homes needed a whole lamb. If their homes could get by with less, they were to pool their resources with their neighbor and get a lamb together.

This is a beautiful picture of community. Instead of wasting lambs, neighbors were to come together and help one another. Even in the Old Testament, God expected his people to help one another. Leviticus 25:35-38. Isaiah 58:6-8.

The lamb the Israelites selected was to be a crowning lamb from the flock-one without spot or blemish.

The Israelites were not just to get any lamb, but they were to get their best. God has always demanded the best from man. When Abel brought “the firstborn of his flock and of their fat portions” God was pleased (Gen 4:4). Psalm 119:34.

Are we giving God our crowning worship? The best worship we can give?

“Then [the children of Israel] shall take some of the blood and put it on the two doorposts and the lintel of the houses in which they eat it. . . . The blood shall be a sign for you, on the houses where you are. And when I see the blood, I will pass over you, and no plague will befall you to destroy you, when I strike the land of Egypt.”

God has long required blood sacrifices. Here, God promises that when he sees the blood from his lamb, he will pass over the Israelites. Blood was required to consecrate priests as holy (Ex 29:19-21). Once a year, Aaron was to make atonement with blood (Lev 16).

The Israelites were to eat their lamb and the rest of their Passover meal fully clothed for a journey-with their belts fastened, their sandals on their feet, and their staff in their hand. They were to eat in a hurry.

Why? Because when God went through Egypt-as he was about to do-the Egyptians would run the Israelites out of Egypt faster than you could blink an eye. In fact, that is precisely the way it happened. When Pharaoh arose in the night to find his firstborn son dead, he called Moses and Aaron and said to them: “Up, go out from among my people, both you and the people of Israel; and go, serve the LORD, as you have said. Take your flocks and your herds, as you have said, and be gone, and bless me also!” (Ex 12:31-32). The symbolic point for the Israelites was that God was about to act for their benefit in a BIG way.

God’s lamb had two-sides: As we have already mentioned, for the Israelites, the lamb was their pardon, their escape from the death God was bringing upon all the firstborn in Egypt. Yet, for the Egyptians, the God’s lamb was for their judgment-without that lamb, the Egyptians would suffer greatly.

We’ve gone through a great deal of material tonight rather hurriedly. This text contains much valuable information for us in this present age, and I wish we had more time to think about it.

But, the reason we’ve gone so hurriedly is so that we can apply this passage to Jesus Christ, our Passover Lamb. Jesus is often called a “Lamb” in the New Testament. John 1:29. We were ransomed “with the precious blood of Christ, like that of a lamb without blemish or spot” (1 Pt 1:19). Revelation 5:8-10.

However, these texts to not specifically compare Jesus to the Passover lamb. However, Paul does so in 1 Corinthians 5:7: “Christ, our Passover lamb, has been sacrificed.” Paul also informs us that Old Testament festivals were only a shadow of what was to come in Christ: “Let no one pass judgment on you in questions of food and drink, or with regard to a festival or a new moon or a Sabbath. These are a shadow of the things to come, but the substance belongs to Christ” (Col 1:16-17). Therefore, we want to spend some time thinking about how the Passover lamb in the Old Testament was a forerunner of Jesus.

Jesus is A CHANGING LAMB.

Jesus is A COMMUNITY LAMB.

It is he who has created a community out of quite divergent people. Speaking of Jesus’ making Jew and Gentile into one body, Paul writes: Ephesians 2:14-16.

It is often said that “Politics makes strange bedfellows.” We see that often as people who normally aren’t tied together ideologically come together around a certain piece of legislation. Yet, politics has never made as strange “bedfellows” as Jesus has. Jesus brings different races, different ideologies, different ethnicities, different economic and educational levels and makes them one in him. It’s not at all uncommon to walk into many congregations and to see the “upper strata” of society worshiping right beside the “lower strata” of society. It certainly should be that way, for Jesus has made all those in him into one community.

Jesus is A CROWNING LAMB.

Jesus is A CRIMSON LAMB.

Only through Jesus’ shedding of blood do I have redemption, the forgiveness of sins. Matthew 26:27-28. Ephesians 1:7. Revelation 1:5b. Revelation 5:9.

Because Jesus is A CRIMSON LAMB and shed his blood, every sin I’ve ever committed as been removed as far from me as the east is from the west.

Jesus is A CLOTHED LAMB.

Jesus himself was not clothed on the cross. Matthew 27:35. Obviously, if Jesus’ garments are being divided after Jesus was placed on the cross, he was not dressed in those garments. It was quite customary for the condemned to die without even a loincloth. The purpose of that was utter humiliation. Among Jews, public nakedness was considered the supreme humiliation. My purpose here is simply to show that the cross was one of the most humiliating, shameful ways to die ever devised by man.

Jesus is A CONVICTION LAMB.