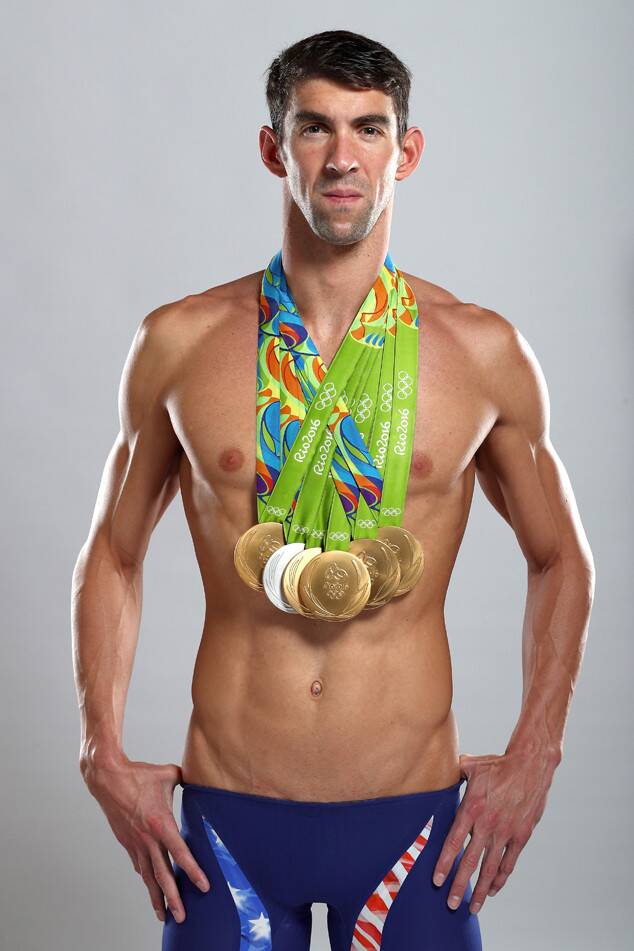 Can you imagine the determination it has taken Phelps to win “Pure Gold”? Phelps has been described as a man of “rigid focus” when he’s at the pool. Outside the pool, Phelps must train constantly. In fact, he eats about 12,000 calories a day in order to keep up with his regimen. For breakfast, Phelps eats the following: “Three sandwiches of fried eggs, cheese, lettuce, tomato, fried onions and mayonnaise,” plus “one omelet, a bowl of grits, and three slices of French toast with powdered sugar,” and then “three chocolate chip pancakes.”

In tonight’s text, the author of Hebrews cautions against a life of pure gold. He writes, “Keep your life free from the love of money.” The author of Hebrews is not at all the first to speak against the love of money. “Out of the heart of man, come evil thoughts, sexual immorality, theft, murder, adultery, coveting, wickedness, deceit, sensuality, envy, slander, pride, foolishness. All these evil things come from within, and they defile a person” (Mk 7:21-23). “Take care, and be on your guard against all covetousness, for one’s life does not consist n the abundance of his possessions” (Lk 12:15). “Put to death therefore what is earthly in you: sexual immorality, impurity, passion, evil desire, and covetousness, which is idolatry” (Col 3:5).

We find the antidote to covetousness in our text. “Keep your life free from the love of money, and be content with what you have, for he has said, ‘I will never leave you nor forsake you.’ So we can confidently say, ‘The Lord is my helper; I will not fear; what can man do to me?’” (Heb 13:5-6). If we are content, we will not be covetous. Contentment is, therefore, a very important virtue for the Christian. As we speak of the opposite of “pure gold” we want to answer two questions: (a) “What is contentment?” and (b) “What is the key to being content”?

The term the author uses here means to be satisfied, to have enough. Thus, being content means that we see ourselves as having enough. Notice how Paul speaks of contentment: “There is great gain in godliness with contentment, for we brought nothing into the world, and we cannot take anything out of the world. But if we have food and clothing, with these we will be content” (1 Tim 6:6-8); Paul only speaks of the need for “food and clothing” to make one content. In today’s world, we think we absolutely need so much: a big house, nice clothes, a cell phone, TV and satellite, and so much more. We have so much more than food and clothing, but how content are we?

Notice that Paul doesn’t simply speak of contentment, but he speaks of godliness with contentment. Contentment is part of godliness. An elder, the highest example in the church, cannot be “a lover of money” (1 Tim 3:3). “No one can serve two masters, for either he will hate the one and love the other, or he will be devoted to the one and despise the other. You cannot serve God and money” (Matt 6:24).

We find several biblical characters who were content with what they had:

The Key to Contentment

We must trust in God’s providential care. This is the reason the author gives in our text: “Keep your life free from love of money, and be content with what you have, for he has said, ‘I will never leave you or forsake you.’ So we can confidently say, ‘The Lord is my helper; I will not fear; what can man do to me?’” (Heb 13:5). God has promised that he will never leave us. If we have God as our helper, why get concerned about the things of this world?

That is the exact reason Jesus gave for not being concerned about the things of this world (Matt 6:25-32). God takes care of the birds of the air, and we are much more valuable than they. God clothes the grass of the field that tomorrow is thrown in the oven; we are much more valuable than they. I know you might be thinking, “Justin, that’s so easy for you to say.” I know it is; I also know how hard it is to live. I also know that the One who originally said these things lived by them:

We must also recognize that we can take nothing out of this world. “We brought nothing into the world, and we cannot take anything out of the world” (1 Tim 3:7). Nothing for which we are so anxious is going to go with us when we go to the grave. Have you ever seen a hearse pulling a U-Haul?

Therefore, why do we get so caught up in worrying about the things of the world? Someone has said, “Greed is the logical result of the belief that there is no life after death. We grab what we can while we can however we can and then hold on to it hard.” Not long ago, there were terrible forest fires out West. I was in my car and heard a reporter speaking to someone who refused to leave his property. He said, “I’ve worked too hard for the things I have to let a fire come and take them away.” The truth is that no matter how hard we work a fire is coming to take everything away: “The day of the Lord will come like a thief, and then the heavens will pass away with a roar, and the heavenly bodies will be burned up and dissolved, and the earth and the works that are done on it will be exposed” (2 Pet 3:10).

It is so foolish to forget that we can take nothing from this world. Jesus told about a man who forgot altogether that he could take nothing with him when he left this world. He had so much that he was tearing down his barns to build bigger ones and planning a big life of partying. God comes and says, “Fool! This night your soul is required of you, and things you have prepared, whose will they be?” (Lk 12:20).

We must also realize what is truly “essential” in life. “If we have food and clothing, with these we will be content” (1 Tim 6:8). Notice that Paul says if we have food and clothing we will be content. The apostle doesn’t say that if we have an iPod, a plasma TV, a Mustang convertible, and a beach house we’ll be content. I fear that far too often we fail to distinguish between what we really need and what we really want. Our consumer-driven economy has taught us that we “need” everything, when we honestly need so very little!

We know that God has promised to provide the necessities of life: “Seek first the kingdom of God and his righteousness, and all these things will be added to you” (Matt 6:33). Pro football star Sean Gilbert sat out the 1997 season because the Washington Redskins had offered him only $20 million over the next five years. He sat out because his contract was one million dollars less than what God told him to sign on for. God’s going to do no such thing! God will take care of our needs, not our wants. We must distinguish the difference.

Along these lines, we must recognize how very rich we are:

We must also recognize that material things do not satisfy. Solomon realized this: “He who loves money will not be satisfied with money, nor he who loves wealth with his income” (Eccl 5:10). Material things cannot meet the true needs of the soul. “All the toil of man is for his mouth, yet his appetite is not satisfied” (Eccl 6:7).

A woman by the name of Evelyn Adams won the New Jersey lottery in 1985 and again in 1986. Her winnings totaled $5.4 million. Now, all her money is gone and she lives in poverty. Why? Because she went to Atlantic City and gambled her money away in the slot machines. She wasn’t satisfied with what she had and now she has nothing. She says, “I won the American dream but I lost it, too. It was a very hard fall.”

Michael Phelps did quite well at the Olympic Games; he is pure gold. Now, he has a real opportunity to go for gold. He has signed a book deal for a work to be published in December; however, the publisher refuses to discuss the financial terms. He has recently signed endorsements with Frosted Flakes and McDonald’s as well as all the other endorsements he already had.