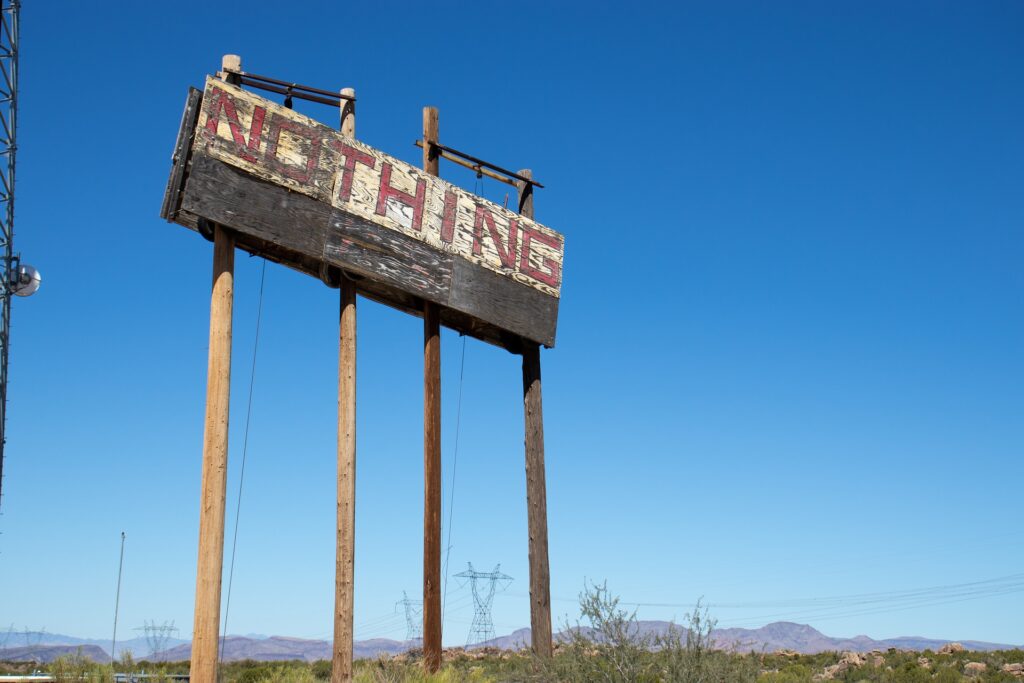 When I preach, you expect me to have something to say. Every sermon must have a subject. If I just stood here with nothing to say, you’d probably fire me after a couple weeks of that. But, tonight I want to preach about “nothing.”

There are four important “nothings” in the Bible.

The Nothing of Activity in Christian Service

“Let nothing be done through selfish ambition or conceit, but in lowliness of mind let each esteem others better than himself” (Phil 2:3).

President McKinley was considering the appointment of a minister to a foreign country. There were two candidates, their qualifications almost equal. Which one did he appoint? The President related a story of an incident that had decided his choice. Years before, when he was a Representative, he boarded a streetcar one night and took the last vacant seat. Shortly afterward, an old washerwoman entered carrying a heavy basket. She walked the length of the car and stood in the aisle, no one offering her a seat.

One of the men, whom the President was to consider later, was sitting in a seat opposite where she was standing. He shifted the paper so as not to see her. Mr. McKinley walked down the aisle, picked up her basket of washing, and gave her his seat. The candidate never knew that this little act of selfishness had deprived him of perhaps the crowning honor of a lifetime.

Although selfishness can do great harm in the church, some people are simply selfish. They’ll expect the air-conditioner to be set so that they are comfortable, forget about everyone else, and complain constantly to those outside the church about how cruel the brethren are. They’ll go to the elders to discuss an aspect of the Lord’s work, and they’ll become angry and leave because the elders don’t do what they think they ought.

We must be humble people. “Whoever humbles himself as this little child is the greatest in the kingdom of heaven” (Matt 18:4). “Whoever exalts himself will be humbled, and he who humbles himself will be exalted” (Matt 23:12). “Be of the same mind toward one another. Do not set your mind on high things, but associate with the humble. Do not be wise in your own opinion” (Rom 12:16).

During the Civil War Lincoln, under severe political pressure, signed an order to transfer certain regiments from one field of battle to another. But Edwin M. Stanton, Lincoln’s Secretary of War, refused to carry out the orders. “Lincoln is a fool for ever signing the order,” Stanton snorted. The remark was passed on to Lincoln, who did not disagree. “If Stanton said I’m a fool, then I must be one,” the President replied. “He is nearly always right in military matters. I’ll step over and find out what his reasoning is.” Stanton, much more knowledgeable in the science of warfare than Lincoln, convinced his commander-in-chief of the folly of the order. Lincoln promptly rescinded it.

Are you doing nothing from selfish ambition? Are you humble?

The Nothing of Anxiety in Daily Life

From a human standpoint, the Philippians had every reason to worry and be anxious.

We are often anxious. We learn that a loved one has cancer, and instead of immediately imploring God, we begin to worry. We’re low on money this month, but instead of praying to God, we make ourselves sick wondering how we’ll pay the bills.

Anxiety can play havoc with our health and well-being. The vast majority of heart attacks occur because of stress. Ulcers are brought about by worrying too much. Anxiety causes one to make rash and foolish decisions, because he cannot think clearly.

Karl Wallenda lived on top of the world. The aerialist thrilled crowds with his daring stunts on the high wire–before that fateful day in 1978, when his show ended. Wallenda plunged 75 feet to his death before an audience of thousands in San Juan, Puerto Rico. What happened? His widow explained that Karl has never been one to know fear. Self-confidence marked his style-until he started worrying. Little details of safety preoccupied his mind. He checked and double-checked the tightrope.

Here was a different Karl. Instead of putting his energies into walking the wire, he concentrated on not falling. From then on, Wallenda became an accident just waiting to happen. It was inevitable that he fall, or so his widow felt.

Anxiety does nothing to help us cope tomorrow, but it only drains strength from today.

We have been called upon to rid ourselves of anxiety. Matthew 6:31-33. In warning His disciples about the destruction of Jerusalem, Jesus said that they needed to take heed that their hearts not be weighed down with the “cares of this life” so that they could escape that destruction (Lk 21:34). “[Cast] all your care upon Him, for He cares for you” (1 Pet 5:7).

If we are not to be anxious, what is the remedy for anxiety? The answer for anxiety is prayer: “In everything by prayer and supplication, with thanksgiving, let your requests be made known to God” (Phil 4:6). When we pray, we have no need to be anxious, for we know God will answer our prayers–if our prayers are according to His will. “If you ask anything in My name, I will do it” (Jn 14:14). “If you abide in Me, and My words abide in you, you will ask what you desire, and it shall be done for you” (Jn 15:7).

Instead of being anxious, are you letting your requests be made known to God?

The Nothing of Almighty Power

Consider what Gabriel was telling Mary: She, although a virgin, would have a son; Elizabeth, her relative, although old and thought to be barren, was going to bear a child. Mary had to be baffled–these things do not ordinarily occur–yet, nothing is impossible with God.

Nothing is impossible for God, but how can he use His great power to help me?

Do you trust God’s power?

The Nothing of Artful Christianity

To the church at Laodicea, Jesus says, “You say, ‘I am rich, have become wealthy, and have need of nothing’–and do not know that you are wretched, miserable, poor, blind, and naked” (Rev 3:17). This was a congregation which thought it had everything together and that it needed nothing, but it was deceived.

So many have this artful Christianity–they are deceived. “Most men will proclaim each his own goodness, But who can find a faithful man?” (Prov 20:6). “Every way of a man is right in his own eyes, But the LORD weighs the hearts” (Prov 21:2). “There is a generation that is pure in its own eyes, Yet is not washed from its filthiness” (Prov 30:12).

Are you deceiving yourself? Are you practicing artful Christianity?

We need to respond to the “nothings” of the Bible. Let us put away selfish ambition and stop worrying. Let’s recognize and trust God’s power and not deceive ourselves.