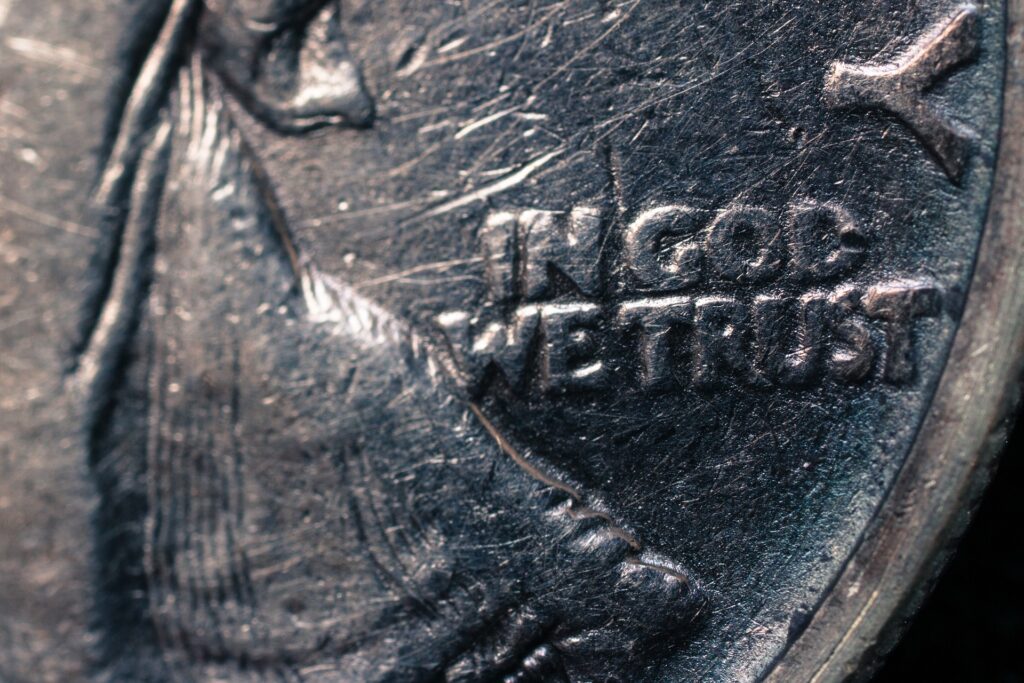 In God We Trust

Many of us are becoming rich and that is extremely dangerous spiritually. To the disciples, Jesus says, “Truly, I say to you, only with difficulty will a rich person enter the kingdom of heaven. Again I tell you, it is easier for a camel to go through the eye of a needle than for a rich person to enter the kingdom of God” (Matt 19:23-24). C. S. Lewis said: “Prosperity knits a man to the world. He feels that he is ‘finding his place in it,’ while it is really finding its place in him.”

We need to understand that it’s not the Warren Buffett’s and Bill Gates’ of the world who are rich—you and I are the rich in the world. Let’s think in terms of American wealth. According to the US Census Bureau, the average 4-person family in West Virginia earns approximately $57,000 a year; that comes out to $14,250 a year per person. However, only 500 million people in the world have an average income of at least $11,500. That means that if you make at least $11,500 a year, you are in the richest 8% of the world. 2.4 billion people—42% of the world’s population—earns less than $1,000 a year. How many of us could survive a month on just $1,000??

It’s not just hard for those we think of as rich to enter the kingdom of heaven; it’s hard for us to enter the kingdom of heaven. Explaining the Parable of the Sower to the disciples, Jesus says, “Others are the ones sown among thorns. They are those who hear the word, but the cares of the world and the deceitfulness of riches and the desires for other things enter in and choke the word, and it proves unfruitful” (Mk 4:18-19). “Those who desire to be rich fall into temptation, into a snare, into many senseless and harmful desires that plunge people into ruin and destruction. For the love of money is a root of all kinds of evils. It is through this craving that some have wandered away from the faith and pierced themselves with many pangs” (1 Tim 6:9-10).

C’mon! Do we really need to guard ourselves against money sin? How many times have we given more of ourselves to our jobs than we have to our God? I’m NOT talking about those of you who must work on Sundays or Wednesdays, so DON’T you hear me say that. Let me illustrate exactly what I mean: Have you ever volunteered to work on Sundays just so that you could get some extra money? Have you ever worked so hard during the day that on Sunday night or Wednesday night you were just “too tired” to be with God’s people? Have we ever missed studying the Scriptures so that we could enjoy the things we’ve bought? “It’s premiere week on TV. I’ve got to watch Criminal Minds. There’s no time to study my Bible.” Have we ever missed the opportunity to do good because it was just too expensive? Have we not given to Potters’ or to the baby care packages because it just cost too much?

We Must Give Generously to God

When we speak about giving on the first day of the week, many people want to know what percentage of their income they should give and should they figure that percentage before or after taxes. I cannot answer that question, for Scripture does not give an answer. Furthermore, I could never answer that question for you, for it’s a personal decision. “Each one must give as he has made up his mind” (2 Cor 5:7). I heard a gentleman at another congregation say several months ago that every Christian should give all of their tax rebate checks to the church. That’s fine if he wants to do that, but he—and no one else—can force such actions on other Christians.

However, we must be generous in giving to the Lord’s work. Malachi 3:8-12. Notice what Paul says about the Macedonian churches concerning the contribution for the saints: “They gave according to their means, as I can testify, and beyond their means, of their own accord, begging us earnestly for the favor of taking part in the relief for the saints” (2 Cor 8:3-4).

A man came to Peter Marshall, former chaplain of the United States Senate, with a concern about giving. The man said, “I have a problem. I have been giving generously for quite some time. It wasn’t too hard when I was making $20,000 a year. But now I am making $500,000, and there is just no way that I can give generously now.” Dr. Marshall reflected on this wealthy man’s dilemma but gave no advice. He simply said: “Yes, sir. I see that you do have a problem. I think we ought to pray about it. Is that alright?” The man agreed, so Dr. Marshall bowed his head and prayed. “Dear Lord, this man has a problem, and I pray that you will help him. Lord, reduce his salary back to the place where he can afford to give generously.”

We often hear people talking about tithing to the Lord. I said last week that I thought giving 10% to the Lord was a good place to start. The New Testament teaches us to be very generous in our giving. To the rich young ruler, Jesus said, “If you would be perfect, go, sell what you possess and give to the poor, and you will have treasure in heaven; and come, follow me” (Matt 19:21). About the woman who gave two small copper coins, Jesus said, “She out of her poverty has put in everything she had, all she had to live on” (Mk 12:44). It’s easy for us to say, “These texts are exaggerations—Jesus didn’t really mean for the rich young ruler to give up everything” and ignore the point. Jesus is making the point that he wants his people to be extremely generous. How generous are we?

Debt is a Bad Idea

Some of you may be wondering how you can give more generously to the Lord. Perhaps many of us could give more to the Lord if we did not have so much debt. The first step in being truly generous to the Lord’s work may be to change the way we think about money.

The Bible has some stuff to say about debt. Whatever we borrow, God expects us to repay. “The wicked borrows but does not pay back, but the righteous is generous and gives” (Ps 37:21). “When you vow a vow to God, do not delay paying it, for he has no pleasure in fools” (Eccl 5:4). We also see in Scripture that those who owe money are enslaved to their lenders. “The rich rules over the poor, and the borrower is the slave of the lender” (Prov 22:7). We can probably best see this principle in the current banking crisis. Many people took out adjustable rate mortgages, and when the rates went up, they defaulted and lost their homes.

Giving is an Act of Sacrifice

Giving is compared to the Old Testament sacrifices. To the Philippians Paul writes, “I have received full payment, and more. I am well supplied, having received from Epaphroditus the gifts you sent, a fragrant offering, a sacrifice acceptable and pleasing to God” (Phil 4:18). “Do not neglect to do good and to share what you have, for such sacrifices are pleasing to God” (Heb 13:16).

What can we learn from Old Testament sacrifices that might help us learn how God wants us to give today? The Jews were quite generous: About the bringing of gifts for the tabernacle, Moses said, “The people bring much more than enough for doing the work that the LORD has commanded us to do” (Ex 36:5). The Jews were required to give only the best animals: “If his offering is a burnt offering from the herd, he shall offer a male without blemish” (Lev 1:3). The Israelites were to give of their firstfruits: “When you come into the land that the LORD your God is giving you for an inheritance and have taken possession of it and live in it, you shall take some of the first of all the fruit of the ground, which you harvest from your land that the LORD your God is giving you, and you shall put it in a basket, and you shall go to the place that the LORD your God will choose, to make his name to dwell there” (Deut 26:1-2). The Lord blesses the generous: “Blessed is the one who considers the poor! In the day of trouble the LORD delivers him” (Ps 41:1).

What principles do we need to gather from the Old Testament? We need to be a generous people. After God rescued his people from Egyptian bondage, they brought so many gifts for the tabernacle that Moses had to tell them to stop. They had only been released from Egyptian bondage, but we have been released from the bondage of sin! How generous do we need to be? If the Jews were required to give the best animals for sacrifice, how can we not give the best that we have? If the Jews were required to give the very first of their crops, shouldn’t we give the very first of our salary to the Lord? If God blessed the Jews when they gave to the poor, shall he not also richly bless us?

A woman had just finished shopping and returned to her car. She found four men inside the car. She dropped her shopping bags, drew a handgun, and screamed, “I have a gun, and I know how to use it! Get out of the car.” The men did not wait for a second invitation; they got out and ran like crazy. The woman, somewhat shaken, loaded her shopping bags and then got into the car. But not matter how she tried, she could not get her key into the ignition. Then it dawned on her: her car was parked four or five spaces away! She loaded her groceries into her own car and then drove to the police station to turn herself in.

The desk sergeant to whom she told the story nearly fell out of his chair laughing. He pointed to the other end of the counter, where four men were reporting a carjacking by an old woman with thick glasses and curly white hair, less than five feet tall, and carrying a large handgun. No charges were filed.

She thought the car was hers, but it really belonged to someone else.

We often think that our lives belong to us, but they really belong to God. “Every good gift and every perfect gift is from above, coming down from the Father of lights with whom there is no variation or shadow due to change” (Js 1:17). “To him and through him and to him are all things. To him be glory forever” (Rom 11:36).

Are we properly using the lives God has given to us?