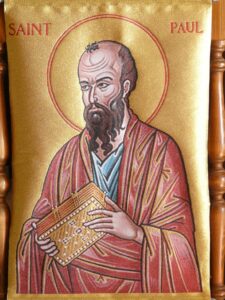 The Apostle to the Gentiles

Have you ever known someone who was an eyewitness to history? On YouTube, there is a video from the February 9, 1956, episode of What’s My Secret. In this video, Samuel J. Seymour talks about being an eyewitness to the Lincoln assassination. Mr. Seymour went to see Our American Cousin with some family members and was in a box directly across from where Lincoln was. He remembered seeing President Lincoln entering the theater and waving to everyone. He remembered hearing that fatal shot and seeing John Wilkes Booth jump from the booth and hitting the stage.

When I lived outside of Charleston, West Virginia, I went to the gym of an afternoon, and a man by the name of Ken Hechler worked out at the same time. We would speak and talk about different things, and only as we’re getting to know each other did I realize who this man was. He served in Congress for many years (he is currently the oldest living person to have served in Congress; he turned 100 a few months ago), and he has been a staple in West Virginia politics from his election to Congress in 1958. His service in Congress is neat, but that’s not really what made talking to Mr. Hechler so interesting. Mr. Hechler did two things that made him such an interesting fella for this history buff—One: He interviewed many of the defendants in preparation of the Nuremberg, including one of Hitler’s chief assistants, and Two: He was a speechwriter for Harry S. Truman from 1949 to 1953, during Mr. Truman’s full term as President of the United States.

Tonight, we’ll think about Paul as an eyewitness to important events and seek to learn from his life.

Paul was zealous to do what he believed was right. Paul consented to the death of Stephen (8:1); those who stoned Stephen laid down their garments at his feet. Paul was so zealous that he went from house to house dragging Christians off to jail. Paul himself said that he had a great deal of zeal: “concerning zeal, persecuting the church” (Phil 3:6). “I advanced in Judaism beyond many of my contemporaries in my own nation, being more exceedingly zealous for the traditions of my fathers” (Gal 1:14).

Paul’s zeal was used in improper ways. He had no right, of course, to be persecuting the church. As Paul was persecuting the church, he reminds me of what he would later write about the house of Israel: “I bear them witness that they have a zeal for God, but not according to knowledge” (Rom 10:2). We need a zeal that is eager to do the right thing; however, we need to make sure that zeal is “according to knowledge.”

God expects us to be a zealous people. “Whatever your hand finds to do, do it with your might; for there is no work or device or knowledge or wisdom in the grave where you are going” (Eccl 9:10). “Be kindly affectionate to one another with brotherly love, in honor giving preference to one another; not lagging in diligence, fervent in spirit, serving the Lord” (Rom 12:10-11). Jesus “gave Himself for us, that He might redeem us from every lawless deed and purify for Himself His own special people, zealous for good works” (Titus 2:14).

What can you find around here to do? We have many people who could use a visit . . . Many would love a phone call or a card. There are people around us who are struggling with sin . . . How can you encourage? We have classes which need teachers. What can you do with all your might?

Paul was a very religious man. He persecuted the church because he believed that was what God wanted. Paul says that he was “circumcised the eighth day, of the stock of Israel, of the tribe of Benjamin, a Hebrew of the Hebrews; concerning the law, a Pharisee” (Phil 3:5).

Yet, as we find him on the road to Damascus, we see someone who is lost. Paul had the high priest give him letters to the synagogues in Damascus so that he could persecute Christians, verses 1-2. Remember that persecuting Christians was part of Paul’s religion; Paul was going to Damascus because he thought God wanted him to persecute Christians. A light shone around Saul, and a voice from heaven said, “Saul, Saul, why are you persecuting Me?” (v 4). Paul inquired as to who was speaking, and the voice replied, “I am Jesus, whom you are persecuting” (v 5). Jesus told Paul to go into Damascus and it would be told him what to do, verse 6.

Paul was very religious, but he was very lost. Many religious people will be lost.

Those who trust in religions other than Christianity will be lost.That is a very judgmental and horrible thing to say in the eyes of many people. Yet, that is exactly what the Lord Jesus Himself has said. “If you do not believe that I am He, you will die in your sins” (Jn 8:24). Jesus is affirming His deity; He places Himself on the same level as the One who appeared to Moses at the burning bush as the I AM. Unless a person believes that Jesus is divine, he will die in his sins and spend an eternity in hell. “I am the way, the truth, and the life. No one comes to the Father except through Me” (Jn 14:6). The people who make those “Coexist” bumper stickers ought to pick up the Bible and see what Jesus says about Himself!

Those who trust in false forms of Christianity will be lost.“Not everyone who says to Me, ‘Lord, Lord,’ shall enter the kingdom of heaven, but he who does the will of My Father in heaven” (Matt 7:21). A false teacher’s “message will spread like cancer. Hymenaeus and Philetus are of this sort, who have strayed concerning the truth, saying that the resurrection is already past; and they overthrow the faith of some” (2 Tim 2:17-18).

Are you a lost religious person? Just because you come here where we seek to follow Scripture does not make you a saved religious person. We can be religious on the outside and lost on the inside (Matt 23:25-28).

People can turn their lives around. Paul made a great change — He went from persecuting Christians to being persecuted because he was a Christian. People today can make great changes in their lives. Some of the Corinthians had practiced evil lifestyles, but they were washed, sanctified, and justified in the name of Jesus (1 Cor 6:9-11).

We need to be cautious about giving up on people. True, some individuals will never change. But, because people can change, we need to give them a chance.

God had a special work designed for Paul. The church at Antioch had certain prophets and teachers, verse 1. The Holy Spirit told the church, “Now separate to Me Barnabas and Saul for the work to which I have called them,” verse 2. The church fasted, prayed, and laid their hands on Barnabas and Saul, and the church sent them away, verse 3.

Speaking of being called to salvation, Paul says, “He called you by our gospel, for the obtaining of the glory of our Lord Jesus Christ” (2 Thess 2:14).

How are we called to ministry by the Holy Spirit in the Word? Scripture was inspired through the Spirit. Think for a moment of how Scripture calls us to minister. We can see the work of God in redemption and wish to be a part of that story. We see the lostness of people and can wish to change that. We see that God has given people abilities to be used in His service (Matt 25:14-30).

He does so through our natural abilities.

There is no doubt but that God provides people with different abilities. In 1 Corinthians 12:12-31, Paul discusses how that God has arranged the body for His pleasure. The context is miraculous gifts, but see the principle of arranging different parts in the body. In Romans 12:6-8, we find many non-miraculous gifts that God gives His people. We’re to use those gifts for the work of the church: “As each one has received a gift, minister it to one another, as good stewards of the manifold grace of God” (1 Pet 4:10).

Are you using your God-given abilities?

We Need to Reach People Where They Are

Paul started where these folks were. Those to whom Paul spoke knew the Old Testament Scriptures. Paul began with those Scriptures and taught Jesus.

We, too, must start where people are. Jesus started where people were–With the woman at the well, Jesus began by talking about living water (Jn 4:10). When we’re seeking to reach people in error, why not start at areas where we all agree and then move to more difficult issues as God has revealed them in Scripture?

Paul and Barnabas disagreed. Paul wanted Barnabas to go with him back to the churches they had established, verse 36. Barnabas wanted to take John Mark, but Paul insisted that they should not take him since he turned back in Pamphylia, verses 37-38. The contention became so sharp that Paul and Barnabas parted company, verses 39-41. Barnabas took Mark and sailed to Cyprus. Paul took Silas and went through Syria and Cilicia.

Sometimes the disagreements are such that brethren cannot work together. There is nothing wrong when brethren realize they are not compatible. Because Paul and Barnabas disagreed, there were two missionary journeys instead of just one. No doubt that God was glorified by the fact that Paul and Barnabas went different ways. More people heard the gospel this way.

We Should Worship in Difficult Hours (Acts 16:25)

When Paul and Silas were imprisoned, they prayed and sang hymns. Paul and Silas were certainly in a difficult situation. They had absolutely no idea that would happen next. The prison where they were was far less than ideal. Yet, they still worshiped God.

Paul told the Ephesian elders that he was free from the blood of all men because he had declared the whole counsel of God.

If ministers today are to be free from the blood of all men, they, too, much preach the whole counsel of God. If we fail to teach the lost, God will require their blood at our hand (Ezek 33:8). We are to preach the Word “in season and out of season” (2 Tim 4:2). The preaching of Scripture is not always popular, yet God’s servants must preach the Word!

We Can Have Clean Consciences (Acts 23:1)

Paul told the Sanhedrin, “Men and brethren, I have lived in all good conscience before God until this day” (Acts 23:1).