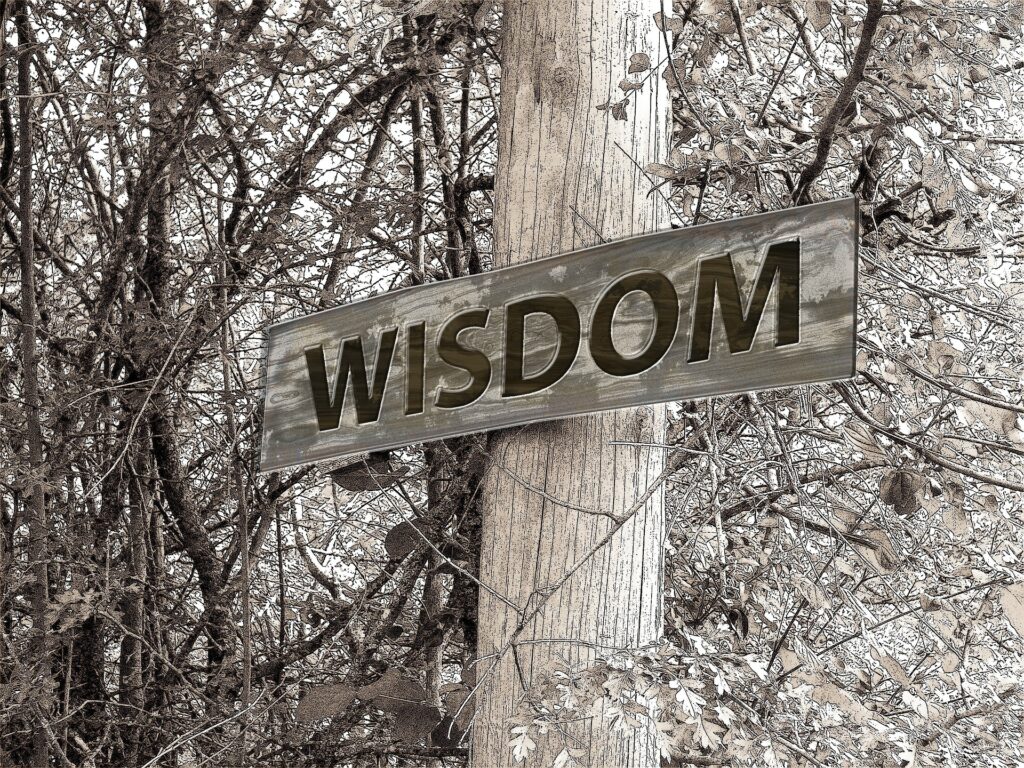 There’s a story about a proud young man who came to Socrates asking for knowledge. He walked up to the muscular philosopher and said, “O great Socrates, I come to you for knowledge.” Socrates recognized a pompous young man when he saw one. He led the young man through the streets, to the sea, and chest deep into water. Then he asked, “What do you want?” “Knowledge, O wise Socrates,” said the young man with a smile. Socrates put his strong hands on the man’s shoulders and pushed him under. Thirty seconds later Socrates let him up. “What do you want?” he asked again. “Wisdom,” the young man sputtered, “O great and wise Socrates.”

Socrates pushed him under again. Thirty seconds passed, thirty-give. Forty. Socrates let him up. The man was gasping. “What do you want, young man?” Between heavy, heaving breathes the fellow wheezed, “Knowledge, O wise and wonderful…”

Socrates pushed him under again. Forty seconds passed. Fifty. “What do you want?” “Air!” the young man screeched. “I need air!” Socrates said, “When you want knowledge as you have just wanted air, then you will have knowledge.”

Man has always desired wisdom and knowledge. Do you remember the temptation Satan gave Eve in the Garden? “God knows that when you eat of it your eyes will be opened, and you will be like God, knowing good and evil” (Gen 3:5). Solomon, of course, had wisdom unparalleled at any time in history. The young king was asked by God to name whatever he wanted, and the king wisely asked for wisdom, a request God greatly fulfilled. Because of Solomon’s wisdom, people flocked from all over the world to hear that wisdom. “Men of all nations came to listen to Solomon’s wisdom, sent by all the kings of the world, who had heard of his wisdom” (1 Ki 4:34). Why would so many flock to hear Solomon’s wisdom? Could it be that many of them hoped to learn at least some of that wisdom for themselves?

In Paul’s own day, people greatly valued wisdom. Just before Paul went and established the congregation in Corinth, he preached at the Areopagus in Athens. We read of the Areopagus: “All the Athenians and the foreigners who lived there spent their time doing nothing but talking about and listening to the latest ideas” (Acts 17:21).

Paul has spent a great deal of time in the last few paragraphs talking about human and divine wisdom and the difference between them. In the previous paragraph, the basis for last week’s sermon, Paul declared that he did not preach with wisdom: “When I came to you, brothers, I did not come with eloquence or superior wisdom as I proclaimed to you the testimony about God” (v. 1). Paul qualifies that statement in this morning’s passage. He says, “Yes, I do preach a message of wisdom, but it’s not human wisdom as the philosophers would expect. It is true wisdom.” What is, according to Paul, true wisdom?

Paul declares that he and his co-workers did speak a message of wisdom among the mature. The Greek term for “mature” in this verse was the term used by philosophers to refer to those who had achieved an advanced level of wisdom. This certainly implies that there are both mature and immature Christians. Why else would Paul say that he spoke wisdom among the mature? A couple paragraphs later, Paul returns to the theme of maturity, or more accurately the lack thereof, in Corinth: “Brothers, I could not address you as spiritual but as worldly-mere infants in Christ. I gave you milk, not solid food, for you were not yet ready for it. Indeed, you are still not ready” (3:1-2).

While Paul spoke a message of wisdom, it was a mature wisdom, not the wisdom of the present age or of the rulers of the age, who are coming to nothing. Paul, in a very real sense, reverts back to the theme of the previous paragraph-the wisdom with which he speaks is totally different from human wisdom; he speaks divine wisdom.

Paul’s wisdom is also not the wisdom of the rulers of the present age. It was thought in Paul’s day that rulers had access to the very best wisdom available-they were believed to get this wisdom through God and their many counselors. It may be that Paul is basically saying, “These leaders claim to get wisdom from God; they don’t I get the real wisdom from God.”

Do we understand that mature wisdom? Have we come to grasp and to obey the cross of Jesus?

Paul says, “No, we speak of God’s secret wisdom, a wisdom that has been hidden and that God destined for our glory before time began,” v. 7.

As the NIV, the Greek New Testament places “God” before wisdom, and that is quite significant. In the Greek of the New Testament period, emphasis was not demonstrated by all-caps, bold, or italics, but by the order of the words in the sentence. That Paul places “God” before “wisdom” is emphasizing emphatically that the wisdom with which he preaches comes from God and none other.

It is a secret wisdom. There were many so-called “mystery religions” in Paul’s day. They were quite like secret societies and lodges of our own day with all that secrecy; only those who became members of the mystery religions knew what was involved. Paul may have been alluding to those religions with the term “mystery” here. If Paul is making an allusion to these mystery religions, his point seems quite obvious: He speaks of this mystery-it wasn’t something that only a select, small number of people could know like the doctrines of the mystery cults. This mystery has also been revealed to us (v. 10)-it wasn’t secret like the mystery cults.

If this was a truth of which Paul spoke and one revealed to us, how on earth could it be a secret wisdom or the wisdom of God in a mystery? It seems there are two ways:

It seems to me that this text applies both of those concepts to this mystery: Paul says the mature can grasp it and they immature can’t; he also says this mystery has been hidden.

God destined this mystery for our glory before time began. Before this world was created, God knew that he would need to give Jesus for our sins, and he made preparation to give Jesus for our sins: “All inhabitants of the earth will worship the best-all whose names have not been written in the book of life belonging to the Lamb that was slain from the creation of the world” (Rev 13:8). Before we ever came to be. God loved us so much that he was going to give his Son to die for our sins. That’s love! Before we knew right from wrong, before we ever tried to do the right thing, before we ever decided we wanted to follow God, he loved us and his Son died for us.

None of the rulers of this age understood that wisdom, for if they had, they would not have crucified the Lord of glory, v. 8. Again, this passage emphasizes that God’s wisdom is a secret wisdom, a wisdom that not everyone can grasp; it is probably more accurate to say that some, for whatever reason, choose not to grasp God’s wisdom. Had the leaders grasped God’s wisdom, they would not have crucified Jesus. I do think it’s important to note, however, that even if the rulers had not crucified Jesus, he would have found a way to die for our sins.

It is written: “No eye has seen, nor ear has heard, no mind has conceived what God has prepared for those who love him,” v. 9. This quotation is a rather loose paraphrase of Isaiah 64:4 and Paul may also have alluded to Isaiah 65:16 as well. We often read this passage at funerals, but I don’t believe that’s the context. The context is this: no amount of human wisdom could devise a plan like the cross, the means God used to save his people. No one had ever seen man saved by the cross, no one had ever heard of people being saved through the means of the cross, and no philosophical school had developed a plan to redeem people by a man on a cross. But, for those who love God, that is exactly what God has done to save them from a devil’s hell.

God has revealed it to us by his Spirit, v. 10. It’s not human philosophy that arrives at the cross as the means of our redemption: it’s the revelation of God through the Spirit. This demonstrates the superiority of revelation to wisdom. We can never, through our human logic and reasoning, arrive at the mind of God. I have completed a doctoral degree, and it has helped me grow in so many ways. But, do you know what new thing I’ve learned through all that wisdom about the mind of God? Not one thing. We learn of God’s mind and will through Scripture, not wisdom.

Society and religious friends might tell us so much about the way things are. Many congregations have learned “new things” about God and “new ways” to do church. But, if those “new things” and “new ways” don’t match Scripture, how valid can they be? How many people will say, “Well, I don’t believe that, because my pastor says this.” If that pastor says one thing and Scripture another, whom will we believe? How many people will say, “This is just the way I feel it is”? If their feelings and Scripture don’t match, what will we believe?

We cannot ascertain God’s will through our eyes, our ears, our minds. We can only ascertain his will as it has been revealed to us by the Spirit.

Do you need to come this morning and respond to that revealed Word we find in Scripture?