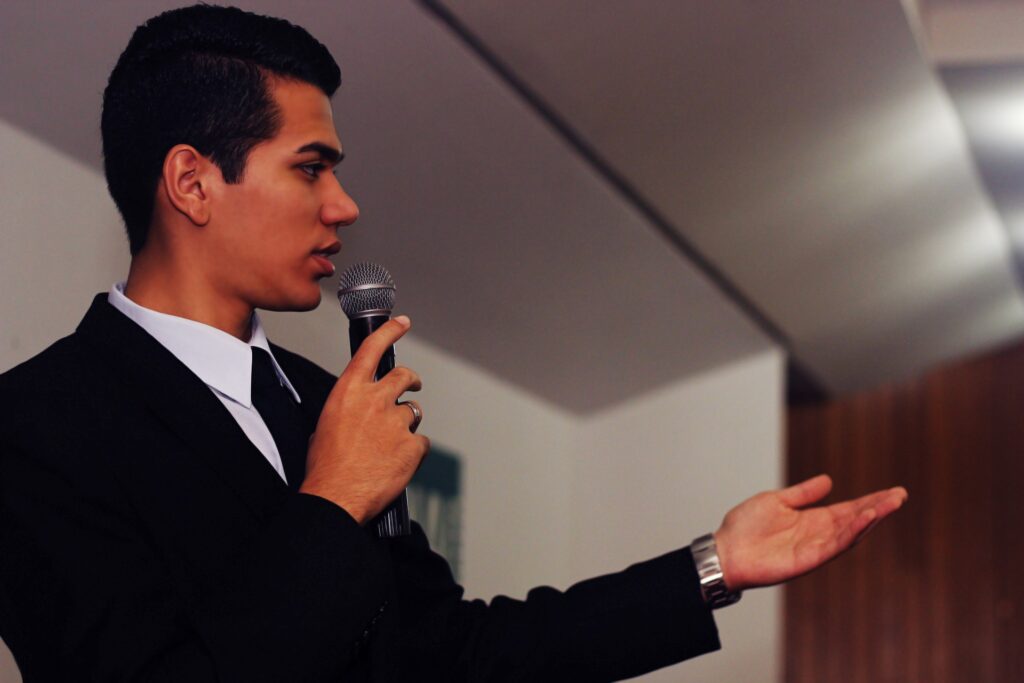 A seminary professor went out early in his ministry and preached in Los Angeles. He thought he had done quite well as he stood at the door greeting people as they left the congregation. The remarks about his preaching were complimentary. That is, until a little old man commented, “You preached too long.” The professor wasn’t fazed by the remark, especially in light of the many positive comments. “You didn’t preach loud enough,” came another negative comment; it was from the same little old man. The professor thought it strange that the man had come through the line twice, but when the same man came through the line a third time and exclaimed, “You used too many big words”-that called for some explanation. The professor sought out an elder who stood nearby and asked him, “Do you see that little old man over there? Who is he?” “Don’t pay any attention to him,” the elder replied. “All he does is go around and repeat everything he hears.”

We preachers are often the punchline of jokes and, I will admit, some of that is well-deserved. I’m sure that Rod is chomping-at-the-bit this morning not getting to make announcements and comment on the title of this morning’s sermon. I have no doubt whatsoever that he would have a very clever comment to make.

To be perfectly honest, you know that I enjoy good-natured, friendly ribbing, and I can take it as well as dish it out. But, for Paul, the accusations against his preaching were not good-natured, friendly ribbing. The idea that Paul wasn’t a good preacher was deadly serious to both him and the Corinthian congregation. In the text before us this morning, Paul talks about his preaching style, or, more accurately, the lack thereof. Paul was, in all truth, a not-so-good preacher. In this text he tells us why he was a not-so-good preacher.

When Paul came to the Corinthians he did not come with eloquence or superior wisdom as he proclaimed to them the testimony about God, v. 1. Paul preached in Corinth for a good period of time. We read of the establishment of the Corinthian congregation in Acts 18. It was in Corinth that Paul met Aquila and Priscilla and worked with them as tentmakers (vv. 2-3). We know that Paul was in Corinth at least eighteen months: “Paul stayed for a year and a half, teaching them the word of God” (v. 11). Yet, it seems reasonable to think that Paul stayed in Corinth much longer than the year and a half Luke expressly mentions, for he records at v. 18: “Paul stayed on in Corinth for some time.” It seems reasonable that Paul would stay at Corinth for a good period of time. Corinth was a busy metropolitan area. Therefore, Paul could make a good living as a tentmaker, and he could also teach many people the Word of God. Because Paul preached in Corinth for so long, the Corinthians were quite familiar with his style of preaching.

When Paul preached in Corinth, he was not with eloquence or superior wisdom. The learned people of Paul’s day were in one of two camps: either those who loved eloquence or wisdom. Because first century individuals lived in an era without radio, television, and computers, they often sought out public speakers to entertain them. These public speakers spent much time honing their skills to an exact science. These speakers may or may not have had anything to say, but they could have moved you to tears. Many of these speakers didn’t care what they had to say just so that they could move their audience. In other words, as long as they could inspire a crowd like a Winston Churchill or a Martin Luther King, Jr., they didn’t care what they said.

In the other camp were those who said, “No, it’s not great speaking ability that’s going to win over an audience; it’s truth.” These were the philosophers who would expound to their hearers the meaning of life and all its mysteries. People would flock to them to find out what the real meaning of life really was. But, of course, these philosophers did not give their hearers the Word of God, and they often differed among themselves about philosophical matters.

In Corinth, probably because of its close proximity to Athens, the people loved both great rhetoric and philosophy. Many of the divisions in Corinth, as I’ve mentioned previously, had to do with the social standing of those in the congregation. While I’m convinced that’s the case, that is far from the whole story. Part of the division seems to have centered around Paul and Apollos. We know that the congregation followed one or the other from chapter one; in chapter three, Paul returns to that theme and asks the rhetorical question: “What, after all, is Apollos? And what is Paul?” (3:5).

That division seems to have a great bit to do with why Paul in this text discusses his preaching style. We know that Apollos was a powerful speaker: “He had been instructed in the way of the Lord, and he spoke with great fervor and taught about Jesus accurately” (Acts 18:25). Apparently, some of the Corinthians had either been converted by Apollos who had heard him at some time and thought, “Wow! Why couldn’t Paul come and preach like that?”

Paul proclaimed to the Corinthians the testimony about God. In other words, Paul taught the truth about God while he was in Corinth.

While Paul was in Corinth, he was determined to know nothing but Jesus Christ and him crucified, v. 2. This verse explains two points the preceding verse brought out: First, this explains why Paul didn’t preach with great eloquence or wisdom in Corinth, and it explains how he taught the testimony about God. Paul cared about preaching Jesus and him as the Savior of mankind. He didn’t care about preaching according to the best rhetorical knowledge of his day or the best philosophical knowledge of his day.

What’s this all have to do with us, especially those of us who don’t preach? What does this have to say with the kind of preachers to whom we should listen? This passage teaches us that we need to be ever so careful about a preacher’s rhetorical ability. There is nothing wrong in a preacher’s using rhetorical ability in the pulpit. There was absolutely nothing wrong with Apollos’ use of rhetorical skill. Yet, we need to be careful that we don’t want rhetorical skill instead of gospel truth. I could easily stand here and wow you with illustration after illustration and give a good after-dinner speech. And, I’ve known many a preacher who would do that very thing. But, if you walk out of here and you’ve heard oratory and not Gospel, what’s the use?

This passage also teaches that we need to be ever so careful about the preacher’s use of his academic abilities. There is nothing wrong with a preacher’s having solid academic credentials. Only a final exam stands between me and a doctoral degree. Paul himself had strong, impeccable academic credentials-before his conversion, Paul studied under the best Jewish scholar of his day.

A problem arises, however, when the preacher puts his confidence in his academic knowledge rather than the Gospel. I could stand here week after week and wow you with theory after theory about Scripture, about the church, or about God. The Lord knows I’ve read enough of those in the past several years! But, if we spent our time discussing the theories of men rather than the Word of God, what have we gained?

There are enough preachers in today’s world who will give us either oratory or philosophy. Flip on the television on Sunday morning and you can find any number of preachers using the best rhetorical devices but being short on Scripture. Go to any church on Sunday morning and you may hear a preacher defending error based on the best human logic. Let us, whenever we hear a preacher, not forget Paul’s model: preaching the cross of Jesus without oratorical or logical prowess.

Paul did not come to the Corinthians with great power, but “in weakness and fear, and with much trembling.”

What did Paul mean that he preached “in weakness and fear and with much trembling”? There are a number of scholars who believe what he meant was that he was nervous about the situation in Corinth. Paul knew, in other words, when he went to Corinth, he was going to face a number of difficulties. Another possibility is that Paul was nervous in going to Corinth, for he wasn’t much of a preacher. We know that Paul wasn’t much of a public speaker: “Some say, ‘His letters are weighty and forceful, but in person he is unimpressive and his speaking amounts to nothing” (2 Cor 10:10). It could also be that Paul was quite aware of the awesome responsibility he undertook every time he stood before men to speak for God.

In whatever way Paul spoke “in weakness and fear, and with much trembling,” his speaking was quite what the Corinthians expected in a public speaker.

Paul’s message was not with wise and persuasive words. His preaching did not rival the best wisdom of his day. We need to remember, I think, that Paul’s preaching may not have been wise by the standards of his day, but it was wise according to God’s standards. That, of course, is what’s so vitally important.

Because of the Spirit’s demonstration in Corinth, their faith could rest on God, not men’s wisdom, v. 5. Because their lives were changed through the Spirit’s power, they could trust in God, not Paul’s wisdom.

Paul couldn’t boast about how his preaching had changed the Corinthian’s lives, for they had been changed by the Spirit’s power, not his preaching. Preachers are notorious for getting an ego trip when someone obeys the Gospel after a great sermon they have preached. To be a little autobiographical, I used to write down on my sermons when someone responded to the invitation. My thinking was, “Hey, if someone responded, that means this is a knock-out sermon. I need to put it on my ‘A-list.’” Then, I realized no one responds to my sermons, not a soul, not ever. They respond to God because of the preaching of his Word. I may have been the mouthpiece, but it was God’s Word, not mine, they had heard.

I earnestly pray that I may never again be so egotistical, for our faith needs to be in the Word of God and not in man’s wisdom, not in man’s rhetorical ability. Have you responded to that Word because your faith is in that Word?