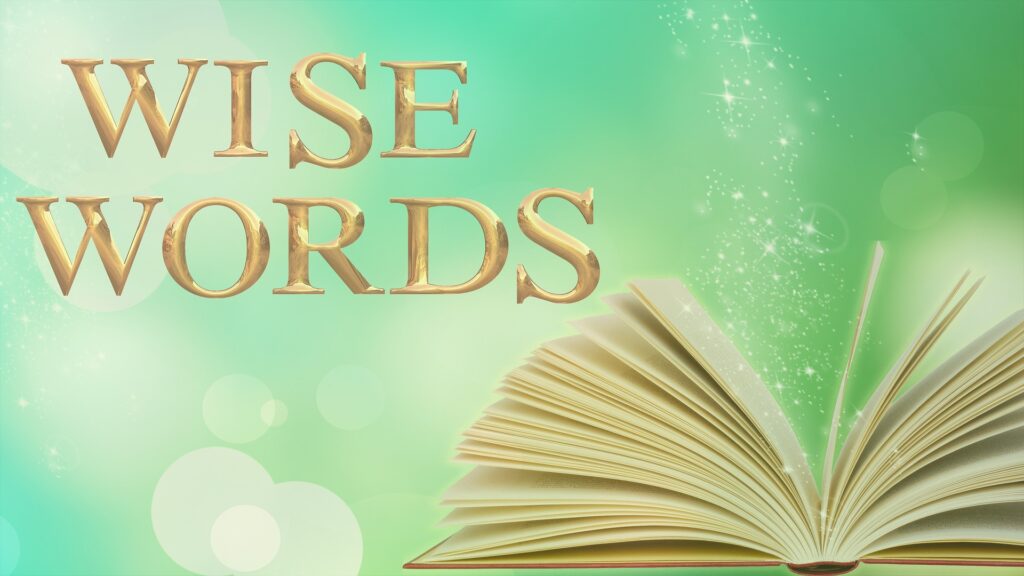 Automaker Henry Ford asked electrical genius Charlie Steinmetz to build the generators for his factory. One day the generators ground to a halt and the repairman couldn’t find the problem. So, Ford called Steinmetz, who tinkered with the machines for a few hours and then threw the switch. The generators whirred to life-but Ford got a bill for $l0,000 from Steinmetz. Flabbergasted, the rather tightfisted car maker inquired why the bill was so high. Steinmetz`s reply? For tinkering with the generators, $10. For knowing where to tinker, $9,990. Ford paid the bill.

In this morning’s passage, Paul basically says that man doesn’t really know where to tinker: God does. As we have mentioned, man has an insatiable desire for knowledge and wisdom. It has been said that if a chemist or physicist sat down to read the scientific journals in his field as his full-time job, at the end of a year he would be three months behind in his reading. That is because every 60 seconds, 2000 typewritten pages are added to man’s knowledge and the material produced every 24 hours takes on person 5 years to read.

Surely, Solomon was correct when he wrote, “Of making many books there is no end, and much study wearies the body” (Eccl 12:12). What we know medically today is not what we’ll know medically in ten years. The computers we use today will certainly be obsolete in ten years.

However, as much as we are able to know through the human mind in the fields of science and technology, we will never be able to know God’s mind through our own academic endeavors. Paul is quite adamant in the passage before us this morning that they only way to know the mind of God is through revelation by the Spirit.

The Spirit searches all things, even the deep things of God. v. 10b. Paul has just been discussing in the previous paragraph how that man cannot know God’s plan for saving man except that it has been revealed by the Spirit. Here, Paul expands that idea somewhat and says that the Spirit searches everything. The Greek term for search refers to examining or investigating. Paul says that the Spirit examines “all things.” Because Paul uses a very generic term which really means “everything,” I don’t think we can limit the Spirit’s investigation to the things we might call spiritual things. In other words, the Spirit knows those 2000 typewritten pages which are produced by man every second; furthermore, he even knows if the things we humans know are true or false.

Yet, that is not all the Spirit knows; he even knows the deep things of God. There are many “deep things of God,” aren’t there? How can God be eternal? Every life we witness has a birth and a death, yet God was never born and he will never die. How can God be one in three? How can there be but one God, which there is, but God be composed of three personalities, as he is? How can calamities come upon “salt of the earth” people? The Spirit even examines those things.

And then Paul asks a rhetorical question: “For who among men knows the thoughts of a man except the man’s spirit within him?” v. 11a. There is absolutely no way I can look at you and know what you’re thinking-you may be following along with the sermon, you may be thinking about lunch, or you might be thinking about who is going to win the World Series. There is no way l can tell. You husbands understand quite well this principle. Your wife gets a little quiet. You know you’ve done something, but until she’s ready to tell you what you’ve done, you have no earthly idea and no way to apologize. Or, how many times have you been having a conversation with someone and all of a sudden, you have no earthly idea of what he or she is talking about. He or she knows. but you don’t.

All is not lost because we cannot know the mind of God, however, for the Spirit teaches us what we need to know of God’s mind.

Paul says that we have not received the spirit of the world but the Spirit who is from God, v. 12a. Who is the “we” of whom Paul speaks? In other words, who are those who have received the Spirit from God? All Christians receive the Holy Spirit. Romans 8:9. The problem with that, of course, is that the Spirit is no longer actively giving revelation, as you know. Therefore, it seems quite unlikely that Paul is referring to all Christians here. It could be that Paul references both himself and those in Corinth who had the gifts of prophecy. Paul discusses in chapters 12 through 14 the spiritual gifts being exercised in Corinth, including prophecy. The problem with that view, however, is that spiritual gifts were a source of great division in Corinth. It seems quite unlikely, therefore, that Paul would say, “Hey, folks, I and a few folks over there have a gift from the Spirit that allows us to know God’s mind.”

I am quite certain that Paul references himself and the other apostles here. That makes quite a bit of sense in light of verse 13: “This is what we speak, not in words taught us by human wisdom but in words taught by the Spirit, expressing spiritual truths in spiritual words.” Only the apostles had the promise that they would have access to the mind of God through the Spirit. The night before Jesus was crucified, he spoke to his disciples about the Spirit (Jn 14:16, 26; 15:13). Some of our religious friends want to apply these promises to all Christians. However, as you go back to chapters 13 and 14, it becomes obvious Jesus was speaking to the disciples. It was a promise for them.

The apostles did not receive the spirit from the world. In other words, they didn’t concern themselves with the philosophy of Aristotle or Philo or Socrates. At least some of the apostles surely knew that wisdom. Paul, you recall, was a highly educated man.

He writes, “This is what we speak, not in words taught us by human wisdom but in words taught by the Spirit, expressing spiritual truths in spiritual words,” v. 13. Paul and the other apostles taught in words taught by the Spirit. It is vital that we consider this statement in the context of 1 Corinthians 2. Paul repeatedly says throughout this chapter. “Human philosophy isn’t what matters. Human philosophy cannot discern the mind of God. Thus, the only way for man to discern the mind of God is through the revelation of God through his Spirit. Of course, we only know of God’s mind what God has chosen to reveal to us of his mind.

Christian maturity is likely in view here. Paul is going to return to that theme in the next paragraph beginning at 3:1. Again, we need to ask the question: How mature are we in Christ? Have we taken time this past week to seek to grow to be more and more like Jesus? Have we considered this past week how better to place ourselves under his authority and to honor him by the way we live?

Are we students of the Spirit, studying the Word he inspired?

Spiritual discernment comes through the Spirit, v 14. The NIV, quite frankly, does a horrendous job at translation with the first part of verse 14. That translation reads: “The man without the Spirit does not accept the things that come from the Spirit of God.” The implication is that I have to have the Holy Spirit, perhaps even a miraculous manifestation of him, to understand what God has given. The word Paul uses refers to the life of the natural man, and Paul’s point then becomes obvious: “Man, with his natural faculties, can never get things from God.”

Peter had a problem using his natural faculties to grasp the things from God. Right after he made that famous confession of faith in Caesarea Philippi, Jesus began to explain to his disciples that his Messiahship meant he would be crucified and raised from the dead (Matthew 16:22). Peter’s purely natural faculties told him that the Messiah wasn’t going to die and be raised from the dead. When Peter saw Jesus’ walking on the water, he wanted to walk on it, too. Jesus granted that request and Peter began to walk on the water. But, with his natural faculties, he knew that wasn’t possible (Matthew 14:30).

So many today presume to speak in the place of God-something man cannot do. How many times did we hear after Katrina that New Orleans was targeted by God for all the sin and decadence there when there is not a single word from God telling us that is so? How many times do we hear people say, “This is what I think God wants”? without a single word from God to that effect?

The things from the Spirit are foolishness to the natural man-Paul has made that point over and over in the opening of this book. To the philosophers and other wise men of Paul’s day, the cross was foolishness because that’s not how they thought God would or should save man.

The spiritual man makes judgments about all things, but he himself is not subject to any man’s judgment, v. 15. In other words, the spiritual man-i.e., the man who lives by what God has revealed in Scripture-makes multiple judgments. This past week we all had to make judgments based on how we would handle our taxes, and I certainly hope we used passages about honesty and tax-paying to make such decisions. There is not a verse of Scripture which says gambling is wrong, but there are numerous passages which discuss the value of work and the love of money.

The spiritual man is not subject to any man’s judgment. In other words, it doesn’t matter what my friends think, what my spouse thinks, what my parents think, it matters what God has said.

Paul uses a quote from Isaiah 40:13 to make that point: “For who has known the mind of the Lord that he may instruct him?” How can I go before God to instruct him about the Creation, about his will, or the way things are? There is no way that I can know God’s mind.