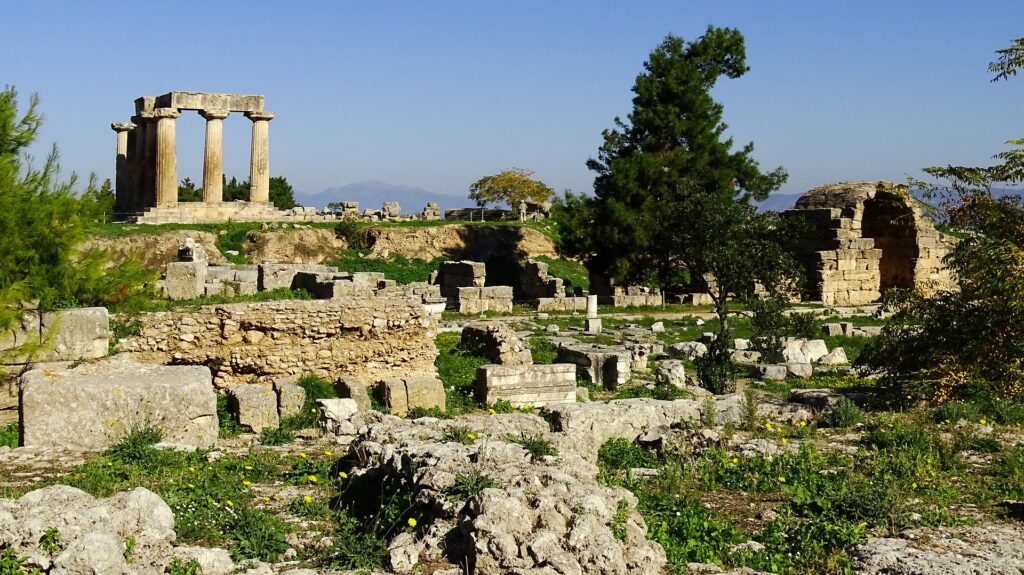 Our origins, although they may appear small and inconsequential, are often very important to us. Often when I go to visit a home, I’ll notice a plaque giving the family name and the date of marriage–that’s an important milestone in the origin of that family. Many of us have done some genealogical research, because we’re interested in the origin of our ancestors. For example, my fifth great-grandfather, Peter Imel, came to this country in 1776 as a Hessian soldier. Shortly after arriving in North America, he went AWOL and served as a drummer boy in General Morgan’s Virginia Riflemen. After the war, he settled in Indiana, where many of his descendants live to this very day.

The fact that our origins say so much about us is one reason the teaching of evolution is so dangerous. If mankind did just come from some pre-organic goo in the ocean, I have no reason to believe I have any value at all. If I just descended from atoms which somehow came together to form life, I have no reason whatsoever to live with any ethical constraints–I can simply do whatever I choose.

Origins are a matter of importance, and they are a matter of importance to God, who through Paul, described the origins of the Corinthian church to that congregation. Over the next few months, I will systematically preach through First Corinthians. I will do so because, quite simply, the Bible is the Word of God and, as such, its words have great value to us as God’s people. I know of no way better to place ourselves under the authority of Scripture than to go through the Scriptures to see what God would have us do.

When we come to the Epistles, I fear that too often we have the tendency to rush right through the introductions, for, we believe, they don’t have much to say to us. However, if, as I am convinced, every word of Scripture originated with God and not man, every word of Scripture has something to say to us. I don’t care if that section of Scripture is a genealogy we tend to ignore or the opening or closing of an Epistle with personal hellos. God never inspired a man to write something he did not intend humanity to know.

The introduction we have before us this morning had great value for the Corinthian congregation. Paul, in these three short verses, begins to lay down his arguments for much of what will follow. This morning, we wish to examine these three verses to see what Paul had to say to the Corinthians about origins and think about our own origins in late of his words. Paul spoke about THE ORIGIN OF APOSTLESHIP, THE ORIGIN OF CHURCH UNITY, and THE ORIGIN OF GRACE AND PEACE.

The Origin of Apostleship, v 1

“Paul, called to be an apostle of Christ Jesus by the will of God, and our brother Sosthenes.”

Paul was called to be an apostle of Christ Jesus. Important in Paul’s understanding of his apostleship was that he did not choose to be an apostle; rather God chose him. God “set [Paul] apart from birth” to be an apostle (Gal 1:15). “I thank Christ Jesus our Lord, who has given me strength, that he considered me faithful, appointing me to his service” (1 Tim 1:12).

God chose Paul to be an apostle of Jesus Christ. The word “apostle” in the Greek of the New Testament era designated an envoy or official messenger. The word really was used in the sense of the modem term ambassador. The United States ambassador to France is the official envoy from our government to that government. Craig Robert Stapleton, the current US ambassador to France, can’t go to the French government and say whatever he chooses, but his role is to act toward that government or behalf of our government. Likewise, apostles were “ambassadors” from God–their role was not to do whatever they wanted, but to present God’s word from God to people. Paul was an apostle of Christ Jesus. The “of Christ Jesus” in this text is intended to show whom Paul served as an apostle, an envoy.

These were important points in Corinth. Paul’s authority was repeatedly questioned by many in Corinth. Chapter 9 provides a very detailed defense by Paul against the charges made concerning his authority. Apparently, some in Corinth did not want to listen to Paul, for he was unmarried, and he did not charge the Corinthians for the services he performed among them. Paul answered those charges in 9:3-6.

Paul, however, long before he gets to chapter 9 begins to lay the groundwork to oppose these charges and says that his apostleship came about because he was called “by the will of God.” The Corinthians could say whatever they wanted about Paul, but he had the authority and backing of God to act as an apostle. The Corinthians could oppose Paul’s authority if they were so inclined, but in opposing his authority, they were opposing the very authority of God who called Paul to be an apostle.

Because Paul was made an apostle of Christ by the will of God what he wrote in Scripture has the authority of God. When I read the writings of Paul (and, of course, any other biblical writer), I’m reading the very words of God. Although Paul’s personality shines through his Epistles, God used Paul’s personality to convey eternal truth to us. Thus, I read not the words of Paul, but the words of God.

Because Paul’s words are the words of God, I need to obey them. Paul wrote some rather unpopular things. For example, Paul wrote that leadership and teaching positions in the church cannot belong to women. That idea is becoming increasingly unpopular in such a modern society as ours. Even among churches of Christ many are abandoning those words of Scripture.

Paul’s authority needed to be recognized, for he was appointed by God to that position. Our elders function in a similar way in that they have been appointed by God to their position. You recall the words of Paul to the Ephesian elders: “Keep watch over yourselves and all the flock of which the Holy Spirit has made you overseers” (Acts 20:28). Congregations choose their own elders–according to the qualifications of Scripture–but the Holy Spirit appoints them to that ministry.

Therefore, God calls upon us to submit ourselves to them. “Obey your leaders and submit to their authority. They keep watch over you as men who must give an account. Obey them so that their work will be a joy, not a burden, for that would be of no advantage to you” (Heb 13:17). Although the word “elder” isn’t used in that text, the description of the ministry there is obviously pastoral, thus we have no doubts that this refers to the eldership. Let us honor the authority of the apostles whose writings convey the Word of God to us and honor the authority of our elders who watch over our souls!

The Origin of Church Unity, v 2

It shouldn’t surprise us at all that Paul spent some time right off the bat telling the Corinthian congregation that they needed to put aside their differences and be unified. The Corinthian congregation was terribly divided–they divided into four camps as to which preacher they liked the best, and they divided into rich and poor when it came time for the Lord’s Supper. In order to deal with such division, Paul begins in the very first sentence of the Epistle to tell the Corinthians to get over their spats.

How does Paul in this sentence deal with the church fights at Corinth? He does so in three ways:

He refers to the congregation as “the church of God.”

The “of God” here refers to the ownership of the Corinthian church–God owns the church. Paul reminded the Ephesian elders that the congregation they pastored belonged to God: “Be shepherds of the church of God, which he bought with his own blood” (Acts 20:28). The church belongs to God, for he paid for it. When I pay for something, it belongs to me. It’s mine. It doesn’t belong to anybody else. Likewise, the church. God paid for it with the blood of his own Son. It’s his. It belongs to him.

Paul’s words to the Ephesian elders were quite significant. The elders, because the church belongs to God, were to pastor the church according to God’s instructions, not their own tastes and likes. There is much the same significance when Paul refers to the Corinthian congregation as God’s church. It didn’t matter if a certain segment in the congregation thought Apollos was a better preacher than Paul or if another group thought Paul was better than Peter. It didn’t matter who was rich and who was poor in the congregation when it came time for the Lord’s Supper. It was God’s church, and the brethren there had no right to divide it over their preferences.

There’s an important lesson here for us: this congregation is the church of God. It doesn’t matter if we’re rich or poor, Republicans or Democrats, ugly or beautiful–we belong to God. Why then would I fight over things that don’t matter? Why then would I slight my brethren and cause problems? This congregation doesn’t belong to me–It’s not my likes and my preferences which are to govern this church. This is God’s church. Therefore, it’s God’s will that must be paramount here!

Paul reminds these Christians that they are saints.

You know that the most basic meaning of sanctify is to take something and set it apart for some special usage. In the Old Testament, the articles used in the tabernacle and in the temple were sanctified, set apart for the specific use of worship to God. The idea of a people set apart for a special task was a theme in the Old Testament (Lev. 11:44-45). The Corinthians had been consecrated by God for his service. They were not consecrated to bicker and to fight and to divide. They were consecrated to serve God.

We also are holy saints–God has separated us from the world to serve him and to serve one another. Are we living up to that holy calling? Are we serving God and serving one another?

Paul appeals to the global unity of the church.

He writes: “Together with all those everywhere who call on the name of our Lord Jesus Christ–their Lord and ours.” Paul is seeking to place the Corinthian congregation in the context of the global Christian community. In other words, this congregation belonged to a church universal, made up of people of every kind of ethnic background, every kind of socio-economic status, every kind of moral background. Thus, the church at Corinth didn’t have any reason to fight and bicker over their differences, for the church universal is made up of greatly diverse people.

The Origins of Grace and Peace, v 3

Paul concludes his salutation by offering a brief prayer for the Corinthians: “Grace and peace to you from God our Father and the Lord Jesus Christ.”

Paul often begins his Epistles with a prayer for grace and peace upon his readers. Grace was the common Greek greeting, while peace was the common Jewish greeting. Paul does this often in his Epistles, and I don’t want to read too much into the text, but I wonder if this isn’t a subtle appeal for the unity of the Corinthians. Paul takes his greeting from two diverse ethnic groups, and I think Paul could quite subtly be saying God has made these two one in Christ, and you are to be one in Christ.