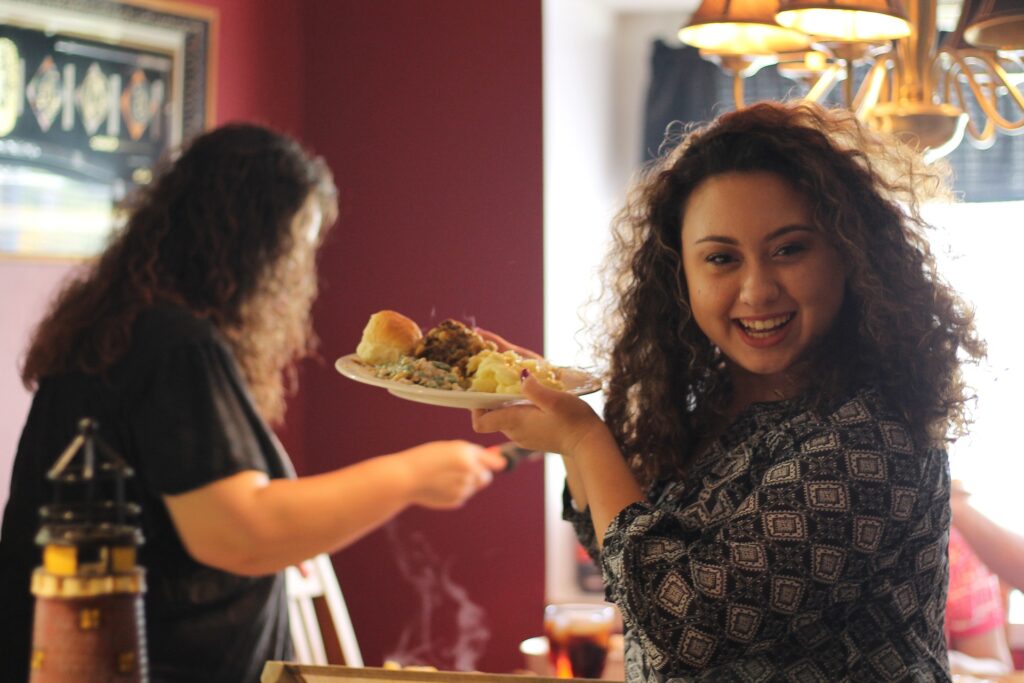 Dan West was a relief worker in Spain during the Spanish Civil War, and he was handing out cups of powdered milk to a long line of hungry children on both sides of the conflict. But the milk ran out before the line did.

As a farmer, Dan’s response was practical. “Wouldn’t it be better,” he reasoned,” to supply families with an ongoing source of nutritious milk so parents could feed their children themselves without having to depend on powdered milk from abroad?” Back home in Indiana, Dan’s friends agreed. “I’ll give a calf, if someone else will raise her,” one said. The first boatload of heifers sailed, not to Spain, because the war there was soon over, but to Puerto Rico. And right from the start families who received them made a commitment to pass on their gift animal’s first female offspring to another family in need. Since then a parade of animals—some familiar, like goats cows, chickens, sheep, and rabbits, and some exotic, like camels, water buffalo, llamas, and guinea pigs—has circled the world. Heifer Project International has helped more than 23 million people in 110 countries move toward self-reliance.

Self-reliance—individualism—greatly influenced the founding of this nation. Ayn Rand, a well-known Russian-born novelist and philosopher, summed up the individualism in this nation when she said, “I need no warrant for being, and no word of sanction upon my being. I am the warrant and the sanction.” We ourselves live by such individualism—we don’t want anyone telling us what type of car to drive, what type of clothes to wear, how to raise our children, or how to live our lives. How many of you have struggled with your aging parents because they felt confident they needed no help driving, even though their abilities were becoming severely limited?

Yes, there are many ways we need to be self-reliant. The Scriptures even encourage us to be self-reliant: “Let each one test his own work, and then his reason to boast will be in himself alone and not in his neighbor. For each will have to bear his own load” (Gal 6:4-5). However, there are some things we simply cannot do by ourselves: “Bear one another’s burdens, and so fulfill the law of Christ” (Gal 6:2). The words in Greek are slightly different—the word in verse 2 is used to refer to the cargo of a ship in Acts (it’s a heavy burden—something you just cannot do by yourself); the word in verse 5 is a burden or weight (it’s heavy, but it’s possible to do by yourself).

The Corinthians seem to have been far too self-reliant when it came to the Lord’s Supper.

The Lord’s Supper has always been intended as a community event. Jesus instituted the Lord’s Supper in a group: “Now as they were eating, Jesus took bread, and after blessing it broke it and gave it to the disciples, and said, ‘Take eat; this is my body.’ And he took a cup, and when he had given thanks he gave it to them, saying, ‘Drink of it, all you’” (Matt 26:26-27). “On the first day of the week, when we were gathered together to break bread, Paul talked with them” (Acts 20:7).

Paul cannot commend the way the Corinthians were worshiping, for their coming together was not for the better but for the worse. It was an inferior way to come together. Verse 17 really servs as a heading for the discussion through the end of chapter 14. Notice that in verse 18, Paul says, “In the first place” and begins discussion the Lord’s Supper. Therefore, the Lord’s Supper was not the only way the Corinthians were coming together for the worse. They were also coming together for the worse concerning spiritual gifts (12-14:33). It is quite possible that they were having problems over women’s role (14:33-35), but Paul may have simply included the section on women’s role as a warning rather than a correction.

Can you imagine a letter from an apostle and saying that our worship was doing more harm than good? How is it that our worship can be for the worse instead of for the better? In this passage, it has to do with how we treat our brethren. The Corinthians were having the Lord’s Supper as part of a fellowship meal. The rich would gorge themselves on the bounty they brought but allow the poor to go without.

It is absolutely essential that we worship according to the New Testament. I would absolutely oppose any attempts to introduce a piano, to give women a leadership role in the assembly, or any other myriad of unbiblical practices some of our brethren are adopting. However, as crucial as those practices are, they are not enough to have true biblical worship. I’ve actually heard of some congregations in larger cities stepping over homeless people sleeping on the church building’s steps to go and worship “in spirit and truth.” True biblical worship requires both the outward acts and the inward heart to be right before God. It’s not either/or.

How is your worship this morning? Have you done what is right outwardly while mistreating your neighbor? Have you come this morning and sang your heart out while you harbor ill against your brother?

The first way the Corinthians’ worship was inferior was that factions existed in the congregation: “In the first place, when you come together as a church, I hear that there are divisions among you” (v 18). We know there were plenty of divisions among the Corinthians—just two examples, they were divided over which preacher was better and over whether or not to eat meat offered to idols.

The amazing this is that Paul says these divisions are necessary: “There must be factions among you in order that those who are genuine among you may be recognized” (v 19). The Greek words in verses 18 and 19 are different. In verse 18, the term “division” refers to the rending of a garment; it is the tearing of something. In verse 19, the term “faction” refers to a sect, or, to put it in our own vernacular, a denomination, or some other group separated from others that has its own ideas.

But let me ask you a question: When was the last time you ever heard a sermon on “the Necessity of Division?” We have repeatedly preached about the sin of division, and Paul’s statement in 1 Corinthians 1:10 and Jesus’s prayer in John 17 make clear that division is sinful.

If division is a sin, how can factions be necessary? Paul explains himself here and says, “In Order that those who are genuine among you may be recognized.” How can factions demonstrate who is and is not genuine? Factions demonstrate who is truly following Christ and who is just giving lip service to discipleship. “I appeal to you, brothers, to watch out for those who cause divisions and create obstacles contrary to the doctrine that you have been taught; avoid them” (Rom 16:17). Without strife, how shall we know who will and will not create factions in a congregation?

“When you come together, it is not the Lord’s supper that you eat. For in eating, each one goes ahead with his own meal. One goes hungry, another gets drunk. What! Do you not have houses to eat and drink in? Or do you despise the church of God and humiliate those who have nothing? What shall I say to you? Shall I commend you in this? No, I will not.”

There was no communion among the Corinthians at the Lord’s Supper. The Lord’s Supper was never intended to be an individual event as it was among the Corinthians. As we come to the table, we come together, with one another in full community, to commune with one another and with the Lord Jesus. We get a glimpse of that close community God intended in Luke’s account of the Last Supper:

In the passage about eating meat offered to idols, Paul speaks of the communion experienced in the Lord’s Supper: “Because there is one bread, we who are many are one body, for we all partake of the one bread” (1 Cor 10:17).

Cleveland Judge Stanley Fisher granted a divorce to Alin and Cheryl Coucet in 1995 but decreed that the couple must continue living together three more years “until the youngest child, Stacey, reaches the age of 18 years and/or graduates from high school.” The arrangement resulted in separate phone lines, separate televisions, even separate refrigerator shelves and a four-bedroom house filled with tension. After the court ordered experience, Cheryl Coucet said, “It has been horrible?” Why? Because they were living under the same roof, but they had no communion, no fellowship. They were living individual lives.

When we come to the Lord’s Supper, do we commune in fellowship or are we living individual lives?

Instead of an immediate Lord’s Supper, the Corinthians were to have a pause so that they could wait on others to arrive. Paul tells them to wait for one another—not to be in such a hurry to eat.

It’s quite apparent in this text that the rich were eating while not sharing with the poor. “In eating, each one goes ahead with his own meal. One goes hungry, another gets drunk” (v 21). From this text, it certainly seems that part of their eating their own meal and getting drunk was eating hurriedly so that they wouldn’t be forced to share with the poor.

In the earliest days of Christianity, it’s not as though churches had set times to get together. Many of the first Christians were slaves, and congregations had to wait until they could get off work to meet. Most churches, therefore, met only on Sunday night and slaves might stagger in at various intervals—some might arrive an hour or so before others. The rich in the churches obviously didn’t need to worry until the sun went down and that day’s work was done in order to meet. What seems to have been taking place in Corinth was that the rich would hurry and get together before the working folks could get there so that they could eat and didn’t need to share with the poor.

Since we no longer partake of the Lord’s Supper as a fellowship meal as did the earliest Christians, what should we learn from this passage. The Corinthians were to take great effort—even delaying their own comfort in eating—to make the Lord’s Supper a communion with one another. Should we do anything less. Can we not go to a brother or sister with whom we do not have close fellowship and say, “Let’s be together?” Can we not go to a brother or sister we’ve harmed and say, “I want to commune with you. Would you please forgive me?” Can we not do the hard work of ridding ourselves of biases and prejudices that prevent true communion.

In Burkesville, Kentucky, a member of a denominational church is suing his preacher and the church for nonsupport, claiming the church reneged on promises of fellowship, love, and assistance. A. B. Cash, the church member, is seeking $600 in offerings, the return of a $125 gift to the preacher and $275 in punitive damages. Cash says the church snubbed his family because of their poverty, kept his 7-year-old daughter out of the church kindergarten program because she was a slow learner, and generally ignored the needs of the family. Cash says their new church—also a denomination—has “given us love, fellowship, kindness, and they did it on their own.” If a denominational group can provide “love, fellowship, [and] kindness,” how much more the church for which Jesus died?!?!

Are we showing one another love, fellowship, and kindness?