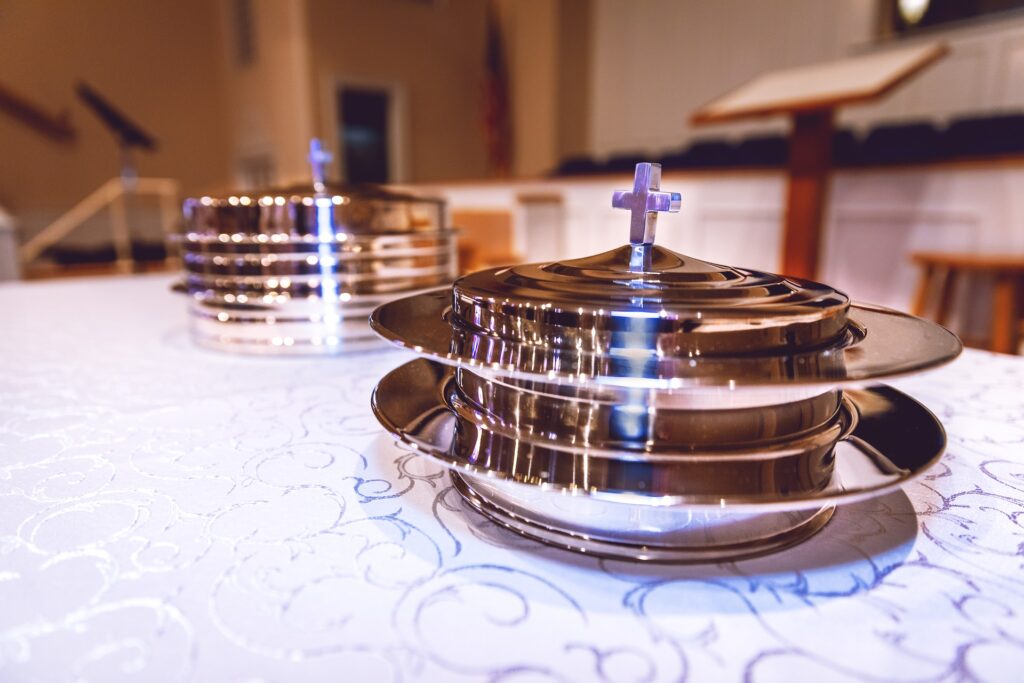 Three times a month, Jermaine Washington and Michelle Stevens get together for what they call a “gratitude lunch.” And, with good reason! Washington donated a kidney to Stevens, whom he described as “just a friend.”

They met at work where they used to have lunch together. One day Michelle wept as she spoke about waiting on a kidney donor list for 11 months. She was being sustained by kidney dialysis, but suffered chronic fatigue and blackouts and was plagued by joint pain. Because Washington couldn’t stand to watch one of his friends die, he gave her one of his kidneys. When you’ve got something great to be thankful for, having a “gratitude lunch” is a great way to celebrate.

What a gratitude feast the Lord’s Supper is! When we take these elements, we do so in remembrance of Jesus: he told the disciples, concerning both the bread and the cup: “Do this in remembrance of Me” (vv 24-25). As we remember Jesus, we are filled with gratitude for what the Lord’s Supper represents: “Drink from it, all of you. For this is My blood of the new covenant, which is shed for many for the remission of sins” (Matt 26:27-28).

But, does the Lord’s Supper resemble a gratitude meal among us? I’m afraid that for many of us the Lord’s Supper is just something we have to mark off our check list in order to punch our timecards for the week. We think: “Okay, I’ve got to sing a couple songs, hear a couple prayers, I’ll give my money after the Lord’s Supper, I’ll listen to Justin preach (he’ll probably go too long again), and take the Lord’s Supper and my timecard is punched for the week.” Our thinking often is: “As long as I do those things, I’ve fulfilled my duty and I’m going to heaven.”

That seems to have been much the attitude of the Corinthians. They were in a hurry to eat the Lord’s Supper–they were in such a hurry that Paul tells them to wait for one another and take the feast in communion with one another. There certainly seems to have been no gratitude whatsoever in this feast, for the Corinthians came together and viewed the rich as far better than the poor, something you just can’t do if you’re filled with gratitude because of what Jesus has done for you personally. If you’re filled with gratitude, your attitude is on Jesus and your relationship with Him, not on how horrible those folks are around you.

It really seems to me that the whole point of this text is that the Corinthians were not taking the Lord’s Supper in community. The reason I think that is Paul begins and ends this section with a discussion of the unity which should permeate the Lord’s Supper. “When you come together as a church, I hear that there are divisions among you, and in part I believe it. For there must also be factions among you, that those who are approved may be recognized among you” (vv 18-19). “My brethren, when you come together to eat, wait for one another. But if anyone is hungry, let him eat at home, lest you come together for judgment” (vv 33-34).

One of the keys of biblical interpretation is that if you have a section which begins and ends with the same word or concept that word or concept is the theme of the passage. So, the theme of this passage is a lack of communion in Corinth, and what we have before us this evening is Paul’s argument for unity. He makes his argument by telling the Corinthians to do three things:

Paul received this revelation from the Lord.

Jesus instituted the Lord’s Supper on the night He was betrayed.

This points to the solemnity of the feast–the Lord’s Supper is not a haphazard part of our worship.

We know that Jesus was extremely troubled at the Last Supper over His coming betrayal. Jesus “was troubled in spirit, and testified and said, ‘Most assuredly, I say to you, one of you will betray Me’” (Jn 13:21). Therefore, even though He was greatly troubled about what was coming in His own life, Jesus, knowing the church needed the Lord’s Supper, instituted it.

How difficult is it for us to act and think clearly when we are troubled in spirit? Haven’t we all experienced times in our lives that our hearts were breaking, but we had to go on to work and we had a horrible time concentrating and doing a decent job because our hearts were so very troubled? Jesus took the effort to institute this feast when His heart was so very troubled, and we need to come to the table with a proper attitude because He put so much effort into this feast.

We know that the bread represents Jesus’ body.

That’s often mentioned at the Lord’s Supper because that is such an important point. Yet, I fear that because we hear the meaning of the bread–and cup—so often that we just tune out when we get to that part of worship.

Brethren, we dare not tune out that reminder that the bread is Jesus’ body, for:

The cup is the new covenant in Jesus’ blood.

A covenant included obligations on both parties to the covenant. Because the Lord’s blood brought about the new covenant, the Lord’s Supper provides us an opportunity to recommit ourselves to the Lord as we partake of the bread and cup.

The feast is also a memorial to Jesus.

We are to take both the bread and the cup in His memory. Thus, the Lord’s Supper is an opportunity for us to remember the high price paid for our sins.

Here’s the point of all this: We need to remember these aspects of the Lord’s Supper as we come to the table. We typically have poor memories. Perhaps we’re like the man who told a co-worker, “The reason I have such a wonderful memory for names is because I took that Sam Carnegie course.” The Lord’s Supper, however, provides us with an opportunity to forget the things of this world and remember what really matters in this life–Jesus’ death and the forgiveness it brings.

Did you realize that every one of you preaches every Sunday? How many times do you hear, “Y’all don’t let women preach”? Oh, yes we do! How many times have some of you guys said, “I’ll do anything you need, but I just can’t preach”? Oh, yes you can. We know why people say women don’t preach here and we know why some of you guys say that you can’t preach. However, the Greek word used for “proclaim” in this passage is the word used for “preach” in other texts.

Because the Lord’s Supper is a proclamation of Jesus’ death, whoever eats the feast in an unworthy manner will be guilty of Jesus’ body and blood. I’ve heard some people in the past say that they just didn’t feel they were worthy to take the feast, and so they were not going to take it. If that’s what this passage means, we had better just leave the Supper on the table! There’s not a one of us worthy of Jesus’ sacrifice!

What does Paul mean by “in an unworthy manner”? The word “unworthy” in Greek is an adverb. Thus it modifies the eating of the Supper, not the person doing the eating. The King James Version also makes this clear and translates this term with an obvious adverb: “Wherefore whosoever shall eat this bread, and drink this cup of the Lord, unworthily, shall be guilty of the body and blood of the Lord.”

Because we can easily eat the Lord’s Supper in an unworthy manner, we need to examine ourselves before the Lord’s Supper. Examination is no fun. I’ve seen enough doctors and had enough exams and tests to tell you that! I’ve had enough exams in school to tell you that exams are no fun! Yet, we understand the necessity of examination. We go to the doctor, for we understand the importance of our physical health; we take that test, for we understand we must in order to pass the course.

However, are we as willing to examine ourselves? You talk about uncomfortable! You talk about unpleasant! You talk about painful! We typically have no problem examining other people. “Did you see the way those kids acted in church? Mine sure never acted that way!” “Did you hear what so-and-so did? I couldn’t enter the door of a church if I had done that!” “I’m so glad he was there to hear that sermon. He needed it, and Justin laid it on him.” Jesus talked about that attitude: Matthew 7:1-5.

The instruction here is not to look at others to see how they are, but to look at ourselves–We are to research ourselves before we come to the table.

What does it really mean to examine ourselves? In context, I believe the examination called for here is our relation with fellow believers. That was the problem in Corinth: the rich and the poor did not come together to take the Lord’s Supper as a community. In the very next verse Paul says: “He who eats and drinks in an unworthy manner eats and drinks judgment to himself, not discerning the Lord’s body” (v 29). “The body” in verse 29 is likely not the physical body of Jesus that died at Golgotha. Rather, “the body” is likely the assembled church, for that fits the context of this entire passage far better than the physical body of Jesus does.

Therefore, before we eat the Supper, we need to think seriously about our union with fellow believers: Do I have a part of my heart that just cannot stand you? Have I sinned against you and have I failed to seek reconciliation? Do I need to speak to you about some wrong you committed against me?

There are dangers in failing to examine ourselves: vv 29-32. There is judgment upon those who fail to examine themselves and fail to take corrective action before coming to the table. Whether this is physical or spiritual illness and death, I do not know for sure. I tend to think of it in spiritual terms. But, I don’t want us to get bogged down in what exactly this judgment was and lose sight of the fact that God judges those who come to the table inappropriately.

God is a God who judges, and we dare not take Him lightly. Concerning the judgment of Babylon, John writes, “Her plagues will come in one day–death and mourning and famine. And she will be utterly burned with fire, for strong is the Lord God who judges her” (Rev 18:8). 2 Peter 2:4-10a. When you examine yourself, do you like what you see, or do you need to come to Jesus this evening?