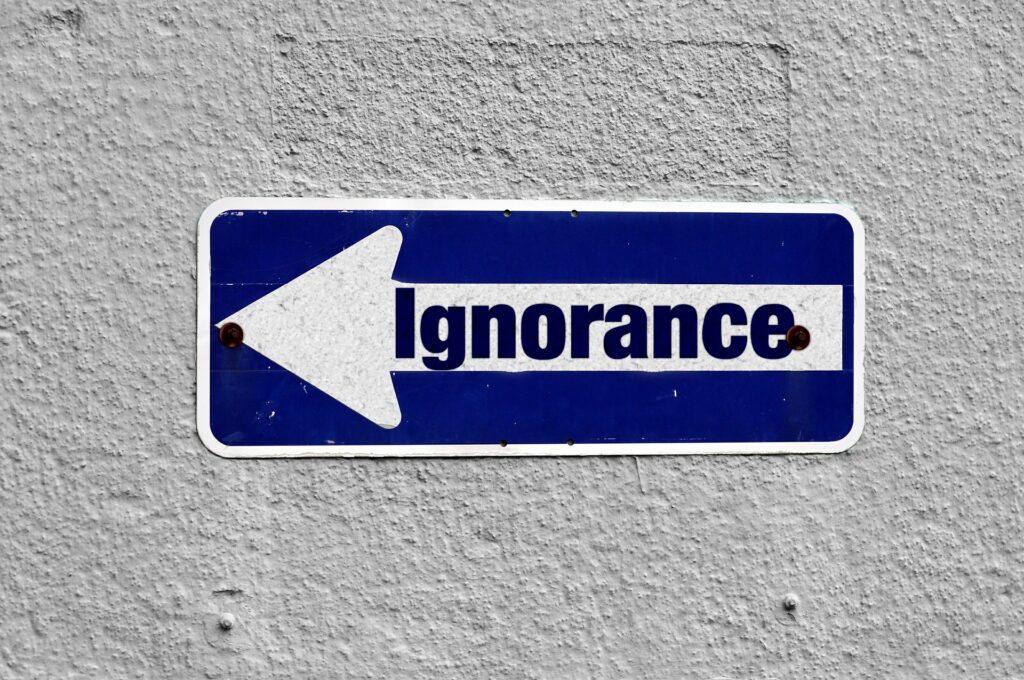 Students in a psychology class at San Diego State College were asked to name their most valuable asset. Two wrote down intelligence, and both misspelled it.

Winston Load, an assistant Secretary of State and ambassador to China, tells about the time he and his wife Betty were driving outside Beijing. They came to a Buddhist temple, and the head monk came out and greeted them. His eyes lit up when he learned that Load was an ambassador and that his wife was a famous author. The monk said, “Would you do this temple a great honor and favor for our future visitors, to guide and instruct them? Could you write something in English?” Obviously, the ambassador and his wife were quite honored. The monk then handed them two wooded plaques and said, “Would you write in English on this plaque the word Ladies and on this plaque the word Gentlemen?’’

We like to think of ourselves as quite intelligent, and we are often quite embarrassed to find out that we don’t know as much as we think we know. Honestly, one of the best things I’ve learned in regard to getting my doctorate is the more I learn, the more I realize how ignorant I really am-I don’t even know a fraction of what there is to know in my field. The Corinthians were undergoing something of the same realization, and they were having quite a difficult time coming to that realization.

I struggled a good bit with that title for this sermon. Did I really want to call this sermon “A Stupid God” and imply that the God who is infinitely wise and intelligent is stupid? Yet, I really believe that’s an accurate description of what was taking place in Corinth. The Corinthians, like many living in metropolitan areas in the first century, prided themselves on having wisdom and having everything figured out. Yet, here comes God and he acts in ways they just cannot comprehend. God comes along and turns all their wisdom inside out. Greeks and Jews alike were thinking that God was stupid, for he acted contrary to the best human wisdom.

Paul writes in this morning’s text that nothing is wrong with God’s wisdom-God’s wisdom is infinite and boundless-the problem is with man’s wisdom. Man and God view wisdom differently from one another. This text discusses the difference in understanding between God and man.

Asking a first-century individual-whether Jew or Gentile-to believe that their Savior died upon a cross was absolutely preposterous.

The Jews believed their Messiah would come and overthrow the Romans and establish a kingdom. That is how the Jews of Jesus’ day understood the prophecies (Dan 7:13-14). You get a glimpse of that anticipation in the words of the apostles shortly before Jesus’ ascension: “Lord, are you at this time going to restore the kingdom to Israel?” (Acts 1:6). Not only did the Jews believe the Messiah would establish an earthly reign, but they believed dying on the cross was a curse (Deut. 21:22-23). A Jewish Messiah, in other words, would never die on a cross.

Likewise, the Romans could never believe in a Savior who died on the cross. The Romans believed that crucifixion was an appropriate death for slaves and criminals, but no one else. Cicero defended a man at a trial under the reign of Julius Caesar. In the defense, Cicero said, “The very word ‘cross’ should be far removed not only from the person of a Roman citizen but from his thoughts, his eyes and his ears.”

In 1857, some graffiti from the second century was found in Rome. The graffiti shows a man with a donkey’s head being crucified with a man bowing down in prayer. The inscription on the graffiti reads: “Alexamanos worships his god.” That was the mindset of the ancient world-a God could never have been crucified.

The people of Paul’s day, in other words, regarded the cross with shame and contempt, and no Savior could ever have died that way. The Jews and Romans wanted God to come and save them on their terms, not on his. They believed they were wiser than God, and that they could determine ow they would be saved.

Do we not have that same mindset in the modern world? Many have an underlying belief that they are wiser than God and can determine for themselves how they’re going to be saved. “All these religions-Christianity, Islam, Buddhism, Hinduism, and the like-are all leading people to the same place.” “As long as you are a good person, you will be saved.” No need to believe in the One who was crucified and raised to life. No need to obey him.

But, those who are being saved view the cross from a different perspective-a demonstration of God’s power. We understand the cross is the means by which we are saved from sin. At the Last Supper, Jesus said, “This is my blood of the covenant, which is poured out for many for the forgiveness of sins” (Mt 26:28). “In him we have redemption through his blood, the forgiveness of sins, in accordance with the riches of God’s grace” (Eph. 1:7).

Paul begins this section of the paragraph by quoting from Isaiah 29:14. I find that a quite intriguing text to use in our passage this morning. In the context of Isaiah 29, Isaiah is pronouncing judgment upon the people. Yet, all is not lost, for God holds out the promise of a future salvation. Isn’t that exactly what’s taking place in the context of 1 Corinthians 1-to some, the cross is a symbol of punishment and to others, it is a symbol of future salvation?

Paul asks a series of rhetorical questions: “Where is the wise man? Where is the scholar? Where is the philosopher of this age? Has not God made foolish the wisdom of the world?”

The Greeks liked their wisdom. In fact, Corinth wasn’t too far from Athens, the center of philosophical discussion in the ancient world. In fact, wise man, scholar, and philosopher seem to stand for human wisdom in all its fullness. These people were so smart they had everything figured out, and God just did not fit in their little box. A Savior could never have been crucified according to the prevalent idea of the day. When one spoke in public, he was to use the most flowing, eloquent speech he could find-Paul comes and preaches about a crucified Messiah-that makes no sense.

Have we not become a lot like that in our own culture? Have we become so wise by our own standards that if God doesn’t act according to our understanding, our own desires, God is wrong? Think for a moment of all man has accomplished in the last 150 years. We’ve gone from telegram, to telephone, to cell phone. We’ve gone from a little plane that could barely fly at Kitty Hawk to placing man on the moon. We’ve gone from a time when smallpox and polio were serious illness to a time when those diseases are barely mentioned. It’s little wonder that people believe they have no use for God in the 21st century!

Has this mindset permeated our own thinking? When we become angry, do we think about how we should act based on our own logic, or do we seek to place ourselves under the authority of God and do what God instructs? When we want to know how to raise our children, do we run to Dr. Spock, the human wisdom, or do we run to Scripture for God’s wisdom? When we face any situation, do we think, “Yeah, I know that’s what the Bible says, but it just doesn’t fit here” or do we seek to honor the words of Scripture? What will we do in our own lives? Will live by our own wisdom, or will we live by God’s wisdom?

Because of God’s wisdom, the world did not know God through its wisdom; God was pleased through the foolishness of preaching to save those who believe. God’s wisdom determined that it would not be man’s wisdom which determines man’s salvation. That makes perfect sense. God is the Creator, and we are the creature. He ought to be able to save man on his terms, not ours.

Here Paul describes the power of the cross, a power which is different depending on our response to it.

We can understand why the Jews sought miracles, for God had a long history of delivering them. Aaron’s rod budded, the Red Sea opened up for the Israelites, and God miraculously fed his people in the wilderness. Even in Jesus’ time, God acted miraculously-Jesus and the apostles performed many miracles from healing to resurrections.

We, too, can understand why the Greeks sought wisdom-Paul was writing in a time when wisdom among the Greeks was valued as greatly as life itself.

The preaching of Christ crucified was a stumbling block to Jews and foolishness to Gentiles. The word for “stumbling block” literally refers to the stick that animals would stumble over, causing the trap to set. It was that which caused one to trip up, to fall. As we’ve already mentioned, a crucified Messiah caused the Jews to stumble, for they were expecting an earthly king, not one who would allow himself to be crucified. In this country, the cross has become accepted as a symbol of deliverance, not a stumbling block.

Likewise, to the Gentiles, the preaching of the cross was foolish. Saviors in the ancient world were to be kings, wealthy benefactors, or miracle workers. The idea that a man would go to the cross and not come right down if he were able, destroy the world if he were able, to save everyone heroically if he were able, just wasn’t the idea the Greeks had of a Savior.

To those of us who come to Christ, the preaching of the cross demonstrates both God’s power and wisdom. The cross has great power. It has the power to forgive me of every sin. I am filthy with sin. What sins have you committed since we worshiped last Lord’s day? The cross of Jesus has the power to forgive me of everyone one of those sins and to make me as white as the snow.

It has the power to change my life. When I gaze at the cross, I realize it was my sinfulness which put Jesus there. Out of appreciation for that sacrifice, I’m going to want to change my life. How has your life changed because of the cross of Jesus?

Paul concludes this paragraph by putting us in our place: “The foolishness of God is wiser than man’s wisdom, and the weakness of God is stronger than man’s strength.” It doesn’t matter how wise we become-whether individually or with the collective wisdom of mankind-God is infinitely wiser-Our wisdom is foolishness compared to his wisdom. It doesn’t matter how strong we become as a nation, as a church, as individuals-The strongest we can possibly become is weakness before God.

A genie appears at a faculty meeting and tells the dean that in return for his unselfish and exemplary behavior, he will reward him with his choice of infinite wealth, wisdom or beauty. Without hesitating, the dean selects infinite wisdom. “Done!” says the genie and disappears in a cloud of smoke. Now, all heads turn toward the dean. At length, one of his colleagues whispers, “Say something.” The dean looks at them and says, “I should have taken the money.”

There is a day coming when those who have refused God’s wisdom will say, “I should have taken his wisdom, not mine.” Do you need to come this morning and claim God’s wisdom and respond to the cross of Christ?