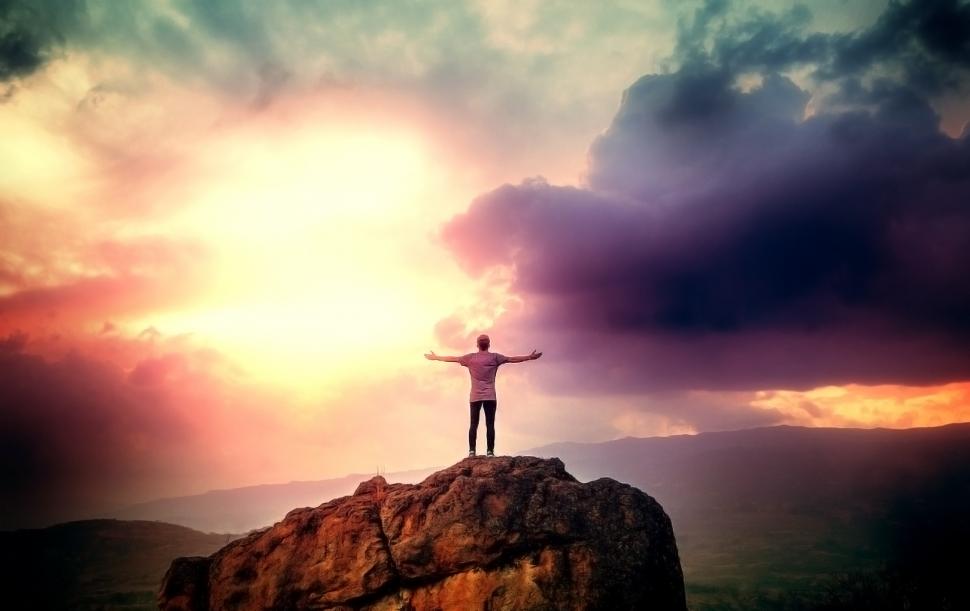 Fire swept through Southern California from the north of Los Angeles to the Mexican border during October 2007. Five hundred thousand acres were burned up, a half-million people displaced from their communities, and 2,000 homes destroyed in the blazes. But in Rancho Bernardo, in a church where 60 families lost their homes, worshipers met to give thanks. One reporter noted, “They gave thanks for the big things: for lives saved, families, friendships. They also gave thanks for small things: a hug, a shoulder to cry on.” Barbara Warden was one of those fire victims. All she was able to salvage were three boxes of photographs and her grandfather’s cuckoo clock. But she, too, was thankful. No one was hurt, neither in her family nor in her community. On the Saturday before the Sunday service, as Barbara searched through her home’s ashes, she discovered a sundial her husband had given her. The following message was engraved on the sundial: “Grow old along with me. The best is yet to be.” Barbara mused, “That says it all, doesn’t it? We have a lot to be thankful for.”

A couple weeks ago, we discussed the victory that we have in Jesus because of his resurrection from the dead. We have a great deal to be thankful for because of Jesus’ resurrection; Paul says as much in this chapter: “The sting of death is sin, and the power of sin is the law. But thanks be to God, who gives us the victory through our Lord Jesus Christ” (vv 56-57). Thus, as we sift through the ashes of our own mortality, we know without doubt that “The best is yet to be.”

“Therefore, my beloved brothers, be steadfast.”

The Greek term “steadfast” here means to be seated, settled, fixed. The idea here is that of steadiness. Paul uses this term in Colossians 1:23 to refer to the fixedness of a foundation: There he prays that the Colossians will “continue in the faith, stable and steadfast, not shifting from the hope of the gospel that you heard.” The term “stable” refers to the laying of a foundation. You get that sense from the King James Version which translates the term “grounded.” A foundation isn’t going to do much good if it is very movable when a storm comes. “A foolish man . . . built his house on the sand. And the rain fell, and the floods came, and the winds blew and beat against that house, and it fell, and great was the fall of it” (Matt 7:26-27). Why did the foolish man’s house fall? Simply because it did not have a stable foundation.

What storm is it that Paul is concerned that the Corinthians’ faith cannot withstand? Remember that the reason Paul spends so much time on the resurrection is that some in Corinth denied the resurrection of the dead. “Some of you say that there is no resurrection of the dead” (v 12). The Corinthians weren’t the only ones in the ancient church to be moved from the faith because of error over the resurrection. Paul tells Timothy, “Avoid irreverent babble, for it will lead people into more and more ungodliness, and their talk will spread like gangrene. Among them are Hymenaeus and Philetus, who have swerved from the truth, saying that the resurrection has already happened. They are upsetting the faith of some” (2 Tim 2:16-18). The Thessalonians were becoming unsettled because they were concerned the resurrection was past: “Now concerning the coming of our Lord Jesus Christ and our being gathered together to him, we ask you, brothers, not to be quickly shaken in mind or alarmed, either by a spirit or a spoken word, or a letter seeming t be from us, to the effect that the day of the Lord has come. Let no one deceive you in any way” (2 Thess 2:1-3). We know, therefore, that much error was propagated about the resurrection in Paul’s day. His message to the Corinthians is simple: “You know that Jesus Christ has been raised from the dead. You know that he has conquered death. Therefore, stand firm in that conviction.”

How firm are we in the conviction of the resurrection? It wasn’t terribly long ago that “Jesus’ tomb” with “his” bones was discovered. Were we shaken to hear these nitwits declare that Jesus had never been raised from the dead? Every year at Christmas and Easter, Time and Newsweek run stories about how the Bible is just a collection of myths. Are we shaken by such stories, or do we know what the truth really is?

At first glance, it might appear that the idea of being steadfast and being immovable were really one and the same. Yet, the term “steadfast” emphasizes the idea of steadiness in the faith and the term “immovable” emphasizes the aspect of the faith that will not be moved even in the worst of circumstances. Luke uses the term for “immovable” to describe Paul’s shipwreck. “Striking a reef, they ran the vessel aground. The bow stuck and remained immovable, and the stern was being broken up by the surf” (Acts 27:41). The ship was stuck—it wasn’t going to move regardless of how hard the winds blew.

Yet, the Corinthians were not the only ones who have had a problem when it came to faith and the resurrection. Right after Peter confessed that Jesus is the Christ, the Son of the living God, Jesus told his disciples what that confession meant: he was going to Jerusalem to die and be raised. Peter rebukes him and says: “Far be it from you, Lord! This shall never happen to you” (Matt 16:22). Not only did Peter deny that Jesus would die, but he denied that he would be resurrected after that death. After the resurrection, Jesus appears to the eleven in Galilee, as he had promised. “When they saw him they worshiped him, but some doubted” (Matt 28:17). Here the disciples are face to face with the Resurrected Lord, and some say, “It cannot be!” and doubted.

“Therefore, my beloved brothers, be steadfast, immovable, always abounding in the work of the Lord.”

The idea in the Greek term of abounding is over abundance. The word is used to describe the baskets the disciples took up after the feeding of the 5,000: “They all ate and were satisfied. And they took up twelve baskets full of the broken pieces left over” (Matt 14:20). The prodigal son also used the term to describe the food his father’s servants had: “When he came to himself, he said, ‘How many of my father’s hired servants have more than enough bread, but I perish here with hunger!’” (Lk 15:17).

Paul here tells the Corinthians that they cannot be that kind of Christian, but they need to be Christians who are abounding in the Lord’s work. We need to be those who abound in the work of the Lord. “Let us not grow wearing of doing good, for in due season we will reap, if we do not give up” (Gal 6:9). “We are his workmanship, created in Christ Jesus for good works, which God prepared beforehand, that we should walk in them” (Eph 2:10).

When the company founded by Andrew Carnegie was taken over by the U S Steel Corporation in 1901 it acquired as one of its obligations a contract to pay the top Carnegie executive, Charles M. Schwab, the then unheard of minimum sum of $1,000,000. JP Morgan of US Steel was in a quandary about it. The highest salary on record was then $100,000. Morgan met with Schwab, showed him the contract and hesitatingly asked what could be done about it. “This,” said Schwab, as he took the contract and tore it up. That contract had paid Schwab $1,3000,000 the year before. “I didn’t care what salary they paid me,” Schwab later told a magazine reporter. “I was not animated by money motives. I believed in what I was trying to do, and I wanted to see it brought about. I cancelled that contract without a moment’s hesitation. Why do I work? I work for just the pleasure I find in work, the satisfaction there is in developing tings, in creating. Also, the associations business begets. The person who does not work for the love of work, but only for money, is not likely to make money nor to find much fun in life.”

Why is it that work we for the Lord? Is it because we hope to receive something in return, or is it because we know we shall be raised from the dead?

“Therefore, my beloved brothers, be steadfast, immovable, always abounding in the work of the Lord, knowing that in the Lord your labor is not in vain.”

A CONQUERING FAITH fathoms that our work in the Lord is not in vain. Could there be a worse feeling in the world than believing that your life’s work was to no avail? How do you teachers feel when you start grading exams and all your students have done quite poorly? How do you feel when you’ve worked hours on the house only to have the children come in and tear it to shreds? Now, take that same feeling of uselessness and apply it to your entire life as you are on your death bed. Solomon knew that feeling quite well: “What has a man from all the toil and striving of heart with which he toils beneath the sun? For all his days are full of sorrow, and his work is a vexation. Even in the night his heart does not rest. This also is vanity” (Eccl 2:22-23). Solomon says, in essence, “I’ve worked and worked and worked, but it’s all useless. My life’s work amounts to nothing.”

How can our labor in the Lord not be in vain? God richly rewards our labor. “Whoever gives one of these little ones even a cup of cold water because he is a disciple, truly, I say to you, he will by no means lose his reward” (Matt 10:42). As Paul nears the end of his earthly life, he writes, “I have fought the good fight, I have finished the race, I have kept the faith. Henceforth there is laid up for me the crown of righteousness, which the Lord, the righteous judge, will award t me on that Day, and not only to me but also to all who have loved his appearing” (2 Tim 4:7-8).

Not only shall God richly reward us for our work, but our work honors him. “Let your light shine before others, so that they may see your good works and give glory to your Father who is in heaven” (Matt 5:16). How can bringing glory to God—whether or not we meet with success as measured by the world—ever be in vain?

Furthermore, abounding in the work of the Lord is a command of God. About the rich, Paul tells Timothy, “They are to do good, to be rich in good works, to be generous and ready to share” (1 Tim 6:18). How can doing what God has asked ever be vain? How vain is your life this morning? Do you need to come, begin to abound in the work of the Lord, and make your life meaningful?