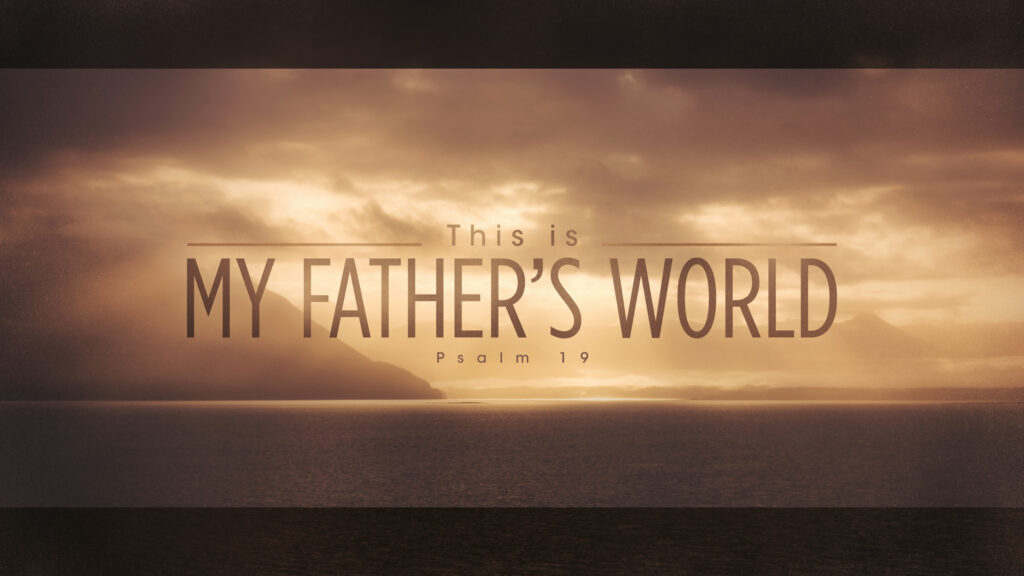 I never cease to be amazed at this natural world. Standing at Niagara Falls for the first time took my breath away. Watching the leaves change in the Blue Ridge Mountains was beyond beautiful. In 2017, my family and I traveled to Sweetwater, Tennessee, to witness totality of the Great American Eclipse—that sight was the most amazing sight in this natural world I have ever seen; words cannot adequately describe witnessing a total solar eclipse. Through a little backyard telescope, I’ve gazed at the mountains on the moon and the four largest moons of Jupiter—amazing to see details of God’s handiwork thousands and thousands of miles away that we cannot see with the naked eye.

I don’t know what you’ve seen of this natural world that has taken your breath away—the Grand Canyon or Yellowstone or maybe the redwoods in California. Maybe it’s just standing at the Gulf and watching the waves roll in with their power.

I also don’t know what all David experienced in Palestine many centuries ago. Of course, when he looked at the night sky, he didn’t have all the light pollution we have here in Houston metro. As David gazed at that sky, he was overcome with thoughts of God’s glory. In Psalm 19, the king after God’s own heart told us: “The heavens declare the glory of God.”

The most amazing nugget in this section of the Psalm is the way David said the heavens and their handiwork speak for God. Notice the terms David used as synonyms for speak to describe the work of Creation: declare, proclaim, speech, reveal knowledge, sound, voice, and words. In verse two, the writer pointed out that the Creation never ceases proclaiming God’s work: “Day after day they pour forth speech; night after night they reveal knowledge” (Ps 19:2). In other words, the Creation declares God’s greatness throughout the day and then throughout the night; you understand you can witness different beauties and wonders of the cosmos during the day and then during the night.

The purpose of the Creation’s speaking is to make known “the glory of God.” That’s the whole purpose of this passage—To declare that God has great glory in the Creation. The Hebrew root for the word “glory” means to be heavy—the root word was used to refer to the liver because it’s a “heavy” organ; it was even used to describe Eli’s weight in 1 Samuel 4:18. In relation to people, the word meant to be a “weighty individual,” i.e., to be honorable or impressive or worthy of respect.

God’s glory refers to his glorious acts, his splendor. When you think of God’s “glory,” you could imagine every facet of God’s character as it exists in absolutely purity, holiness, fulness, and perfection. There have been some privileged to see representations of God’s glory beyond what we see in this natural world:

You can see that same glory as you look at the natural world.

Since “The heavens declare the glory of God,” you need to stop and explore nature.

I imagine that we’re all so busy that we seldom “stop to smell the roses,” so to speak. The natural world—the moon, the stars, the sun, the warmth, the cold, the grass, the flowers, the animals, the clouds, and every single thing in Creation speaks of the glorious God of Abraham, Isaac, and Jacob—the God we serve. Take time this week to look at the Creation of God and to see his glory!