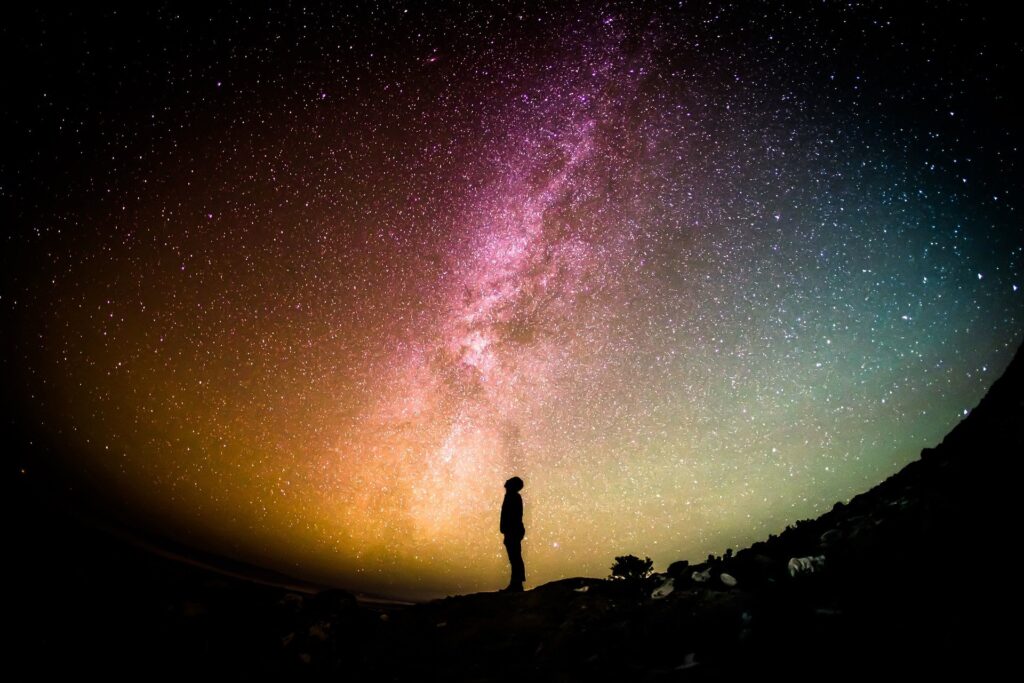 I have always enjoyed astronomy. Years ago Mom and Dad got me a tabletop telescope for Christmas; it wasn’t much, but it was what they could afford.

I remember one evening my parents had some friends from church over to our home for supper. After dark, I went outside with my telescope. The moon was bright, and I pointed my telescope to the moon for the first time. I saw some craters and mountains that aren’t readily visible to the naked eye. I ran back in the house jumping up and down and shouting to everyone that I had finally seen the moon!

I don’t know the level of interest you have or don’t have in astronomy. Tammy endures my interest, but she really doesn’t care about it. There are times, however, that you simply cannot avoid astronomical phenomena. It impossible to ignore a solar eclipse—the lighting outside changes if very much of the sun is covered. It’s impossible to avoid seeing a meteor from time to time. Even with Houston’s light pollution, it’s impossible to avoid the stars in the night sky.

Abram, an old man when God spoke to him on that night, would become a father. Not only did Abram become the physical father of a great multitude, but he is also our spiritual father—Galatians 3:7-9. Today is Father’s Day, and I couldn’t imagine preaching from a better text than the one where our spiritual father believed God and was credited with righteousness.

God told Abram in a vision not to fear. What reason would Abram have to fear? In the previous chapter—Genesis 14—Abram has made several enemies. Lot, his nephew, had been taken captive, and Abram went out against Chedorlaomer and the kings with him and defeated them and freed Lot. They could very well have wanted revenge—God assured Abram, however, that he had no reason to fear; God would be his shield.

Abram can’t imagine what the reward is going to be, for he is childless and the heir of his house is Eliezer of Damascus. God had promised that he would make of Abram a great nation (Gen 12:2), but it’s been a while.

Eliezer of Damascus is the heir of Abram’s household. If a man had no children in the Ancient Near East, he could adopt a slave to become a son and inherit his household. Abram has made this Eliezer his heir, but it’s not clear if Eliezer became Abram’s heir before or after God had made his earlier promise.

God brought Abram outside and told him to count the stars, if he could. Abram’s descendants would be as numerous as the stars in the heavens.

Abram believed God and it was counted to him as righteousness. This is a rather important statement. Abram believed that God would do what he had promised, and God accepted Abram as though he were righteous. Abram wasn’t righteous, but God viewed him that way on the basis of his faith.

As you read this passage, something becomes abundantly clear: “Father God promises to make the impossible a reality.” How should that truth impact your life?

You need to understand the FORCE of the Father.

In other words, you need to understand the Father’s power. Think about the power God was promising Abram—there was absolutely no way Sarai could conceive a son; she was far too old for that. Yet, you know the rest of the story—Sarah, as her name was then, conceived and bore a son. God has the power to make an old woman a mother.

Consider all the ways the Father has demonstrated his power. He created everything that is. When he saw that the thoughts of man was only evil continually, he flooded the entire earth. When his people were stuck between the Red Sea and Pharaoh’s army, he opened up the Red Sea and the Israelites crossed on dry ground. God led his people, a small group of nomads, from the wilderness to conquer the Promised Land. When Jesus Christ was crucified, God brought him back to life three days later.

God can use his great power in your life, too. “Now to him who is able to do far more abundantly than all that we ask or think, according to the power at work within us” (Eph 3:20). The power at work within you is the power that created the world, that parted the Red Sea, that conquered Canaan, and that raised the Lord Jesus from the dead. That is the power that helps you when you pray: “I tell you, ask, and it will be given to you; seek, and you will find; knock, and it will be opened to you” (Lk 11:9). That’s the power that saves you from sin: “He is able to save to the uttermost those who draw near to God through him, since he always lives to make intercession for them” (Heb 7:25).

You need to understand the FAITHFULNESS of the Father.

God, you see, not only had the power to cause Sarai to conceive in her old age, but God actually did so: Genesis 21:1-2—Notice: “The LORD did to Sarah as he had promised.”

Our heavenly Father is one who keeps his promises. “God is faithful, by whom you were called into the fellowship of his Son, Jesus Christ our Lord” (1 Cor 1:9). “Let those who suffer according to God’s will entrust their souls to a faithful Creator while doing good” (1 Pet 4:19).

You need to understand the FAITH of the Father.

Abram believed what God had told him, and God “counted it to him as righteousness.” For you to be counted as righteous, you also must believe:

Do you truly believe this morning? The author of Hebrews reminded us that Abraham’s faith—that faith that led to his justification—caused him to act: Hebrews 11:8-12, 17-19. Do you have the faith of Abraham this morning? Do you need to come in faith and act on your faith?