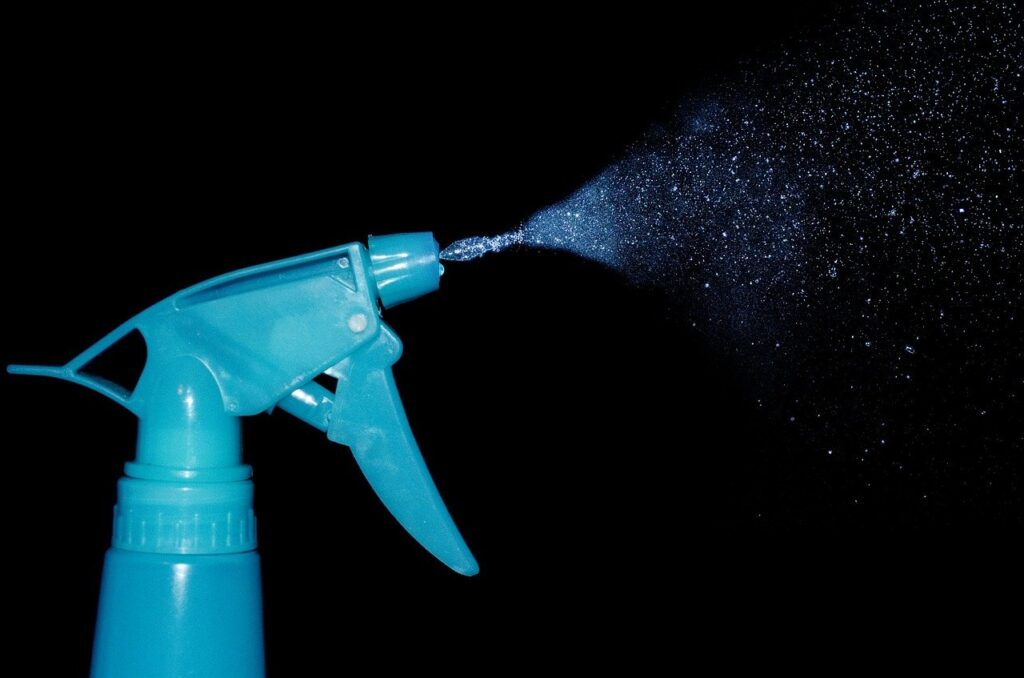 A teacher was exploring her student’s knowledge of some well-known proverbs. She asked her class, “Cleanliness is next to what?” A small boy in the back of the room raised his hand and said, “Impossible?”

Indeed, we know how difficult it is to keep our lives clean and pure. It’s difficult to keep our lives clean, for on our own, we are polluted with sin. There isn’t a one of us here who doesn’t struggle with sin that makes us so unclean. In tonight’s text, David comes before God in a very unclean state. “Wash me thoroughly from my iniquity, and cleanse me from my sin!” (v 2). “Purge me with hyssop, and I shall be clean; wash me, and I shall be whiter than snow” (v 7). “Create in me a clean heart, O God, and renew a right spirit within me” (v 10).

Before composing this Psalm, David had sinned with Bathsheba and sinned grievously. David did nothing wrong at first. He simply walked out on his rooftop and saw a beautiful woman bathing (2 Sam 11:2). David saw Bathsheba purely by accident – nothing wrong in walking upon his roof and looking out over his kingdom. But, we all know that David didn’t stop there. He called Bathsheba to him, committed adultery, and when she sent word to the king that she was pregnant, David had her husband placed on the front lines of battle and married Bathsheba upon his death.

God sent Nathan the prophet to confront the king over his extremely impure actions. Tonight’s text was written shortly after David’s confrontation with Nathan and the king asks the King of kings for “A Good Cleaning.” What comes about as a result of “A Good Cleaning”?

David here pleads with God to forgive him. He pleads on the basis of God’s “steadfast love” (English Standard Version) or “lovingkindness” (King James Version) and God’s abundant mercy. “Mercy” is the compassion that causes one to help the weak, the sick, and the poor – Mercy is the divine attribute that causes God to help the sinful. “Lovingkindness” refers to God’s faithful love – This is the divine attribute that allows God to be patient with sinners. David asks for his sins to be blotted out. This pictures sin as a debt having been written down. David asks that God simply take his debts and erase them. David asks to be washed and cleansed from his sin – This views sins as filth that needs to be washed away.

Copernicus was a great mathematician. His studies and calculations revolutionized the thinking of mankind about the universe. As he lay dying, The Revolution of the Heavenly Body was placed in his hands. That revolutionary work had just been published. But, he did not see himself at death as a great scholar or astronomer but only as a sinner in desperate need of a Savior. On his tombstone are carved this words that he himself chose: “I do not seek a kindness equal to that given to Paul. Nor do I ask the grace granted to Peter. But that forgiveness which Thou didst grant to the robber – that, earnestly I crave!”

Do you tonight need that forgiveness?

“I know my transgressions, and my sin is ever before me. Against you, you only, have I sinned and done what is evil in your sight, so that you may be justified in your words and blameless in your judgment. Behold, I was brought forth in iniquity, and in sin did my mother conceive me.”

In these verses, David expresses his guilt for sin. He realizes just how wrong he has been. He acknowledged his sins, for they were before him. David knew what he had done was wrong. He didn’t try to wiggle out of it – he didn’t say, “Everyone sins and it’s not really that big a deal.” David simply says, “I have sinned.”

David accepted personal responsibility for his sin. Notice that he uses the expressions “my transgressions” and “my sin.” These were not merely sins everyone else was committing – David himself had sinned. Accepting personal responsibility for sin is so vitally important. “If we say we have no sin, we deceive ourselves, and the truth is not in us” (1 Jn 1:8). Many in Scripture accepted responsibility for their sins. When the Prodigal Son returned to his father, he said, “Father, I have sinned against heaven and before you” (Lk 15:21). The Apostle Paul did not attempt to hide his previous life of persecution. Instead, he writes to Timothy, “The saying is trustworthy and deserving of full acceptance, that Christ Jesus came into the world to save sinners, of whom I am the foremost” (1 Tim 1:15).

In a special office of the Treasury Department is located the government’s Conscience Fund. It represents a unique service for those who have cheated on Uncle Sam. The Fund now stands at $3 million. It all started back in 1811 when a New York man sent in $6 and said that he was “suffering the most painful pangs of conscience.” The biggest year of conscience settlement-no one knows the reason-was 1950 when $370,285 came in. The largest contribution was $14,250 from London in the late nineteenth century. Along with the money often comes notes of explanation and appeals for forgiveness. Those who send money to the US Government for the Conscience Fund understand the full depths of wrongdoing. Do we?

David says that he had sinned only against God. At first glance, this verse seems quite odd; David had sinned against Uriah and Bathsheba. But, David knew that he had broken God’s covenant. At the root of every sin is wrongdoing against God.

“Behold, you delight in truth in the inward being, and you teach me wisdom in the secret heart.”

David understands that God desires purity in the inner part of man.

The only way for David to have that inner cleansing was for God to teach him – David asks God to help him know wisdom in the inner parts. The only way for David to have this wisdom would have been through divine revelation. The only way we can have wisdom is through divine revelation. “How can a young man keep his way pure? By guarding it according to your word” (Ps 119:9). Obedience to the truth purifies our souls: “Having purified your souls by your obedience to the truth” (1 Pet 1:22).

The true story of the Mutiny on the Bounty has been told many times, but there is one part that certainly deserves retailing. Nine mutineers with six Tahitian men and twelve Tahitian women went ashore on Pitcairn Island in 1790. One sailor soon began distilling alcohol, and the little colony was plunged into debauchery and vice. Ten years later, only one white man survived, surrounded by native women and half-breed children. In an old chest from the Bounty, this sailor one day found a Bible. He began to read it and then to teach it to the others. The result was that his own life and ultimately the lives of all those in the colony were changed. Discovered in 1808 by the USS Topas, Pitcairn had become a prosperous community with no jail, no whisky, and no crime.

“Purge me with hyssop, and I shall be clean; wash me, and I shall be whiter than snow. Let me hear joy and gladness; let the bones that you have broken rejoice. Hide your face from my sins, and blot out all my iniquities.”

David implores for God to cleanse him from his sin.

When David knows that he has forgiveness, he will rejoice. David asks to hear joy and gladness. After Nathan came to David, David had no joy-He was forced to recognize his sin and the coming death of his son. Now, David pleads for joy. David pleads that the bones God has crushed might rejoice. David here pictures God’s judgment as the crushing of bones. David asks that his judgment might be turned into joy.

When our sins are forgiven, we have every right to rejoice. Jesus told the seventy to rejoice that their names were written in heaven (Lk 10:20). After his baptism, the eunuch went on his way rejoicing (Acts 8:39).

“Create in me a clean heart, O God, and renew a right spirit within me. Cast me not away from your presence, and take not your Holy Spirit from me. Restore to me the joy of your salvation, and uphold me with a willing spirit.”

David asks that God make him into a different person; specifically, he asks for a clean heart and a new and right spirit. A clean heart is one that isn’t clouded by sin – this is a soul that has been purified. We need God to cleanse our hearts, for we cannot do so ourselves. “If the blood of goats and bulls, and the sprinkling of defiled persons with the ashes of a heifer, sanctify for the purification of the flesh, how much more will the blood of Christ, who through the eternal Spirit offered himself without blemish to God, purify our conscience from dead works to serve the living God” (Heb 9:13-14). The Corinthian Christians knew such cleansing: “You were washed, you were sanctified, you were justified in the name of the Lord Jesus Christ and by the Spirit of our God” (1 Cor 6:11).

We need new hearts. “Keep your heart with all vigilance, for from it flow the springs of life” (Prov 4:23). If our hearts are not changed, we will continue in the same sins that created a need for cleansing in the first place.

The good news is that when we come to Christ all things are changed. “If anyone is in Christ, he is a new creation. The old has passed away; behold, the new has come” (2 Cor 5:17). Have you experienced that life-changing power of Christ?

David asks to be accepted by God. The removal of God’s Spirit from someone signified that God was removing his pleasure from that person. When God rejected Saul as king, the Spirit left him (1 Sam 16:14). David understands that if God removes his Spirit from him, God has removed his pleasure from him. Do you know the pleasure of God?

Have you had “A Good Cleaning”? Do you need to come tonight and be cleansed?