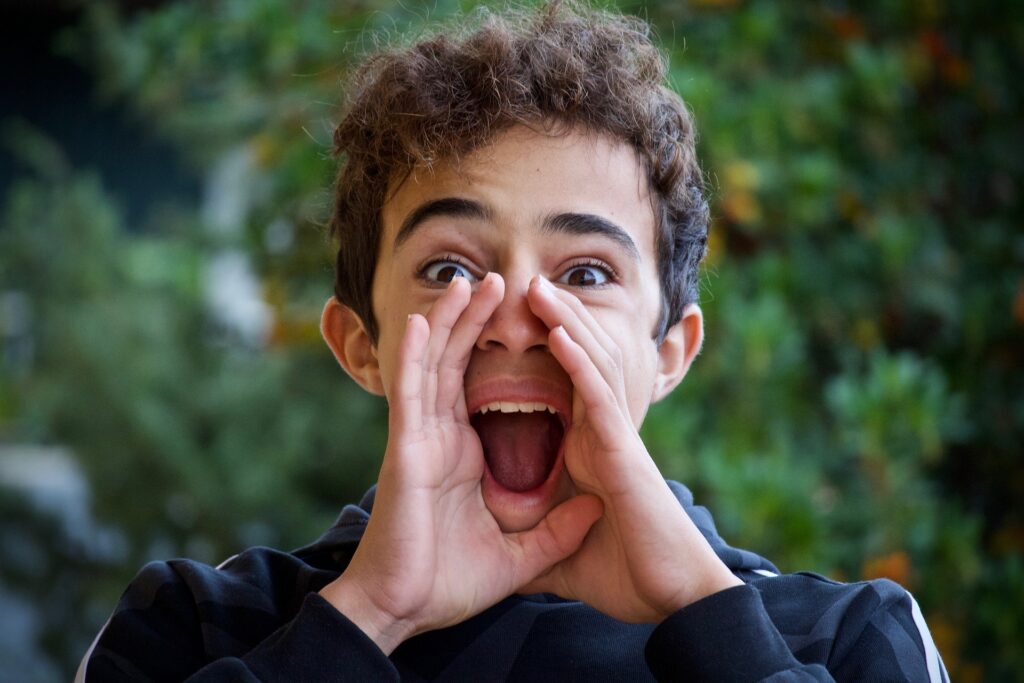 My Papaw Imel served in the U.S. Army during the Second World War. He saw action in both North Africa and Italy. He told several “funny” stories about the war, but he never discussed the combat he saw.

I’m confident he saw combat, for—until his dying day—loud noises scared him terribly. When the telephone would ring, Papaw would jump and yell. Every 4th of July, my family watched fireworks. Not Papaw—he’d stay home and be as far away from the sound of those explosions as possible.

Dad and I conducted Papaw’s funeral together in the spring of 2001, and the VFW provided military honors at the gravesite. As Dad concluded his remarks, he said, “In just a few moments, for the first time since World War II, my dad is not going to be scared when guns fire.”

I’m sure you hate some loud noises, too. Maybe a neighbor likes to throw wild parties at two in the morning. Maybe a supervisor likes to yell when things don’t go right. Maybe a restaurant has great food, but you don’t eat there because it’s just too loud inside. Maybe a siren takes you back to calling an ambulance for your loved one.

The Pharisees hated a loud noise, viz., the sound of a crowd praising Jesus. When Jesus entered Jerusalem triumphantly, crowds erupted in spontaneous praise. When the Pharisees told Jesus to hush the crowd, the Lord said that if the multitude were silent, then the rocks would cry out.

Do you know why? Because “Jesus Christ deserves praise for his mighty acts.”

Jesus sent two disciples to go into a village, find a colt, and bring it to him. Jesus’s riding “on a colt, the foal of a donkey” is the fulfillment of Zechariah 9:9. Zechariah tied Jesus’s riding on a donkey to kingship, and Luke’s telling of the Triumphal Entry portrays Jesus as a king worthy of praise.

Jesus’s entering Jerusalem on a donkey showed he wasn’t some triumphant military leader who would overthrow the Roman government. Instead, he was a peaceful, humble King who would submit to death on a cross.

The ancients often spread cloaks in front of a ruler to honor him as the king, so the people were honoring Jesus as the King he is.

The people began to praise God in a loud voice for all the mighty works they had seen Jesus perform. Because of his mighty deeds, people knew Jesus was the Messiah and that redemption was near. Surely some folks in this crowd had directly benefited from Jesus’s mighty works—maybe they had a family member raised from the dead or they had been blind or demon possessed or on their deathbeds until Jesus acted for them.

The people quoted Psalm 118:26, but they added “king” to their praise. The people understood Jesus as the Messiah the Old Testament promised and as the King.

Even if Jesus silenced his disciples, he said, the stones would cry out his praises. Jesus might have meant that ordinary rocks—stones—would cry out. However, in the overall context of the Gospels, Jesus likely meant that the stones of the temple—the place God dwelt—would cry out in his praise. Regardless of what specific stones the Lord meant, Jesus’s mighty works were so worthy of praise that he is going to be praised one way or the other.

You see, “Jesus Christ deserves praise for his mighty acts.” That Jesus’s mighty acts merit praise is taught throughout the New Testament:

Since Jesus has done mighty works, he deserves your praise. How can you give Jesus the praise he deserves?

The people gathered around Jesus knew all about his mighty acts—they knew Jesus had healed the sick, caused the blind to see, opened the ears of the deaf, loosed the tongues of the mute, and raised the dead.

Look, too, at the mighty works he has done in your life. What sins has Jesus forgiven? How has Jesus providentially cared for you? What prayers has Jesus answered?

Once you have Reviewed Jesus’s mighty acts, you need to:

The crowd revered Jesus for his mighty acts; the stones would have cried out if they were silent. Jesus is so worthy of reverence that he was going to get praise one way or the other—and he deserves your praise.

Many have offered God private praise. A few weeks ago, we looked at Psalm 63 to discuss the need to assemble with the saints; in opening that psalm, David said he worshiped at the sanctuary, the tabernacle. Yet, in that same psalm, David spoke of private praise: “My mouth will praise you with joyful lips, when I remember you upon my bed, and meditate on you in the watches of the night” (Ps 63:5b-6).

Spend time in private praise for Jesus’s mighty works, and do that through prayer. In prayer:

The praise in this morning’s text is public—so public that the Pharisees became alarmed. It’s always right to praise Jesus’s mighty works publicly. The four living creatures and twenty-four elders publicly praised Jesus’s mighty works: Revelation 5:9-10. Yes, this scene is from a vision; however, notice the public nature of their praise.

As you assemble on the Lord’s Day, you focus on the Lord’s mighty works: Hymns recall his majesty, prayer lifts his name on high, and the communion services focuses on Jesus’s redemptive work and resurrection. Commit to public worship and to praising Jesus’s mighty works.

As you praise Jesus’s mighty works before the world, you provide a powerful example. In jail, Paul and Silas “were praying and singing hymns to God, and the prisoners were listening to them” (Acts 16:25). Paul and Silas’ public praise did much good. When an earthquake occurred, none of the prisoners tried to escape and the jailer came to Jesus.

Your public praise provides a powerful example. When your neighbors see you leave for worship every Sunday morning, they’re reminded to put first things first. When folks see you give thanks in a restaurant, they’re reminded God gives all good things. When your accountant sees your yearly contribution, he’s reminded that God is blessing you for giving generously.

Commit to praising Jesus before others that they may learn of Jesus’s mighty works.

My grandfather didn’t like loud noises, and the Pharisees didn’t like the loud praise of Jesus’s mighty works. You—yes you—have the power to cause loud noise in heaven this morning: “There will be more joy in heaven over one sinner who repents than over ninety-nine righteous persons who need no repentance” (Lk 15:7).

Do you need to come to Jesus in repentance and cause great noise in heaven this morning?