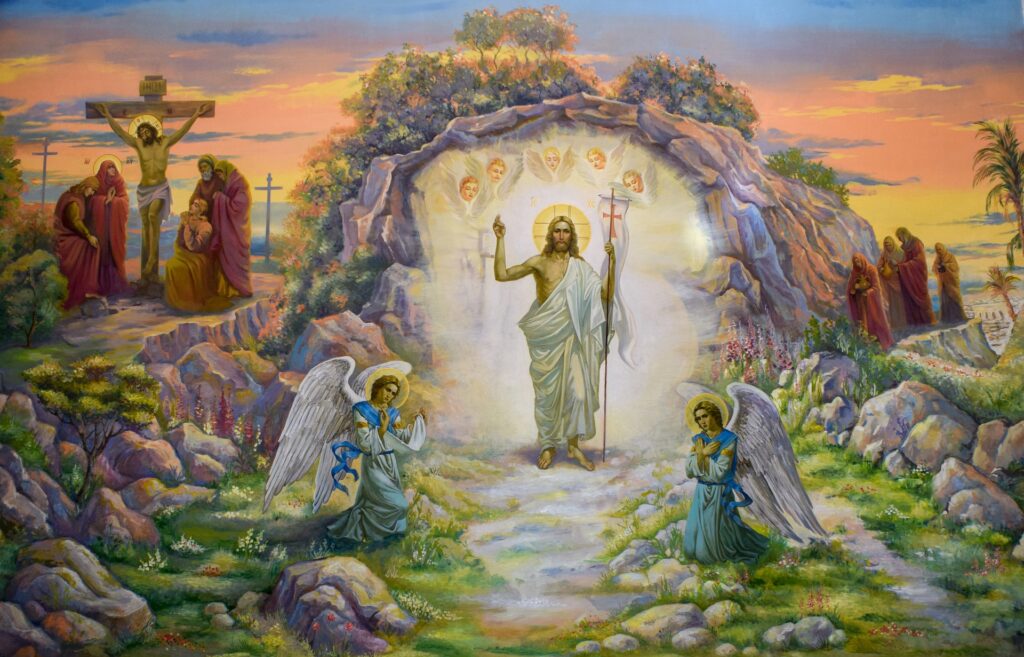 Shortly after I moved here, I took my dog Traveler to Sylvain Beach one Saturday afternoon. He hated it and wouldn’t go near the water—I imagine the sound of the waves was just too much for him.

There have surely been times when you haven’t understood what someone was trying to say. Maybe it was a matter of a language barrier—someone was speaking a foreign language or someone was speaking with a strong accent. Maybe you struggled to make sense of what a doctor was telling you because it was dreadful news or maybe because he gave you the news in medical jargon. Maybe you couldn’t believe your employer was actually letting you go. Maybe you couldn’t believe your child just used the language you’re fairly certain you heard.

In this morning’s text, we find two groups of folks who cannot believe what they heard. Some women went to anoint Jesus’s body with spices, but they couldn’t find his body. While they’re confused and wondering what happened to the body, a couple of angels reminded them that Jesus promised to be raised. The women then remembered Jesus’s words. If the women had remembered Jesus’s words—if they had believed his words—they would never have brought spices to the Lord’s tomb in the first place.

The apostles did not believe the women who reported the empty tomb and the angelic message. The apostles had heard Jesus announce his coming betrayal, arrest, crucifixion, and resurrection multiple times. For example: “The Son of Man must suffer many things and be rejected by the elders and chief priests and scribes, and be killed, and on the third day be raised” (Lk 9:22). If they truly believed their Teacher was the Messiah, they should have believed what he had told them, but they didn’t believe.

The women and the apostles should all have believed the tomb would be found empty, for that was Jesus’s promise. But such a promise made no sense whatsoever. You see, most people in first-century Israel expected a Messiah to come and lead a revolt to free them from Roman tyranny. A Messiah wasn’t going to die a criminal’s death and be resurrected three days later. Yet, that’s exactly what Jesus promised, and that’s exactly what took place. What we find in the narrative of the empty tomb is this simple but profound truth: “Jesus’s words are true even when they don’t make sense.”

The women went to the tomb “at early dawn” on the first day of the week. The Sabbath ended at sundown on Saturday, but the women likely waited until first light on Sunday for safety and to make finding the tomb easier.

The women found the stone rolled away from the tomb. The stone would have been very heavy; stones at tombs frequently required several men to help move them. I’ve always wondered how the women expected to get in Jesus’s tomb in the first place.

The fact that the stone has been rolled back would likely mean someone has either tampered with the grave and/or robbed it. So, the group of women entered the tomb. But they did not find Jesus’s body.

The women were perplexed there was no body. Bless their hearts! If only Jesus had said what was going to happen on the third day. . . . But you do have to wonder what the women thought when there wasn’t a body.

While the women were pondering the body’s disappearance, “two men stood by them in dazzling apparel.” In the Old Testament, angels often appeared as men. Luke added that the men were arrayed “in dazzling apparel” to remove all doubt about their identity.

The two angels reminded the women that Jesus had told them he would be crucified and raised on the third day. Once reminded of what Jesus had said, the women “remembered his words” and went to tell the apostles what had taken place.

Luke named the women who “told all these things to the eleven and to all the rest.”

The women’s “words seemed like an idle tale, and [the eleven and the rest] did not believe them.” Nearly all Jewish officials discounted the word of women, for women were considered unstable and undependable. The Greek term for “idle tale” is a medical term and referred to the wild talk of one in delirium. In other words, the apostles thought the women had a fever or something and couldn’t think straight. The apostles should have believed, for Jesus had told them precisely what was going to happen. However, when Jesus was raised, the disciples refused to believe it because they thought the women had lost their marbles.

If Jesus’s disciples had only regarded Jesus’s words as true, they would have accepted what the women told them.

“Jesus’s words are true even when they don’t make sense.” The women couldn’t understand why no body was in the tomb. If they had paid attention to what Jesus had taught, they wouldn’t have gone to the tomb in the first place. The apostles couldn’t understand how some women could be talking about an empty tomb. If they had paid attention to Jesus’s teaching, they would have readily believed the women.

You see, the people expected a Messiah who would come and overthrow Rome, not One who would die and be raised. What Jesus taught made no sense to the women and the apostles. The Messiah wasn’t going to die and be raised, he would overcome the Roman occupation of the Holy Land.

You need to Admit.

You need to be honest and acknowledge that—like the women and the apostles—you may have a hard time understanding Jesus at times.

You need to Acknowledge.”

You need to acknowledge that Jesus Christ is Lord. If the women and the apostles had fully acknowledged Jesus as Lord and all that entails, they would have understood his resurrection. Interestingly, the resurrection sealed Jesus’s identity once and for all. He was “was declared to be the Son of God in power according to the Spirit of holiness by his resurrection from the dead, Jesus Christ our Lord” (Rom 1:4). God “worked [great power] in Christ when he raised him from the dead and seated him at his right hand in the heavenly places” (Eph 1:20).

Because Jesus Christ has been raised from the dead, he is the Lord of heaven and earth. Therefore, he has every right to tell you how to live. Just because his words don’t make any sense to you doesn’t mean they aren’t true.

Therefore, you need to make a choice: Is he going to be the Lord of your life or not? After Jesus had taught some difficult truths, “many of his disciples turned back and no longer walked with him” (Jn 6:66). What Jesus had taught on that occasion about eating his flesh and drinking his blood was difficult, and the bulk of his disciples just didn’t understand it. So, they turned back from following him.

Are you going to do the same? Will you turn back from Jesus because some of what he taught is not to your liking? Or will you follow him no matter where he leads? Spend some serious time this week asking yourself if you’re truly willing—no matter what he taught—to make Jesus the Lord of your life.

Do you know why you need to make Jesus the Lord of your life? Peter supplied the answer in John 6. After many disciples had turned back from following him, Jesus asked the twelve if they wanted to turn back, too (Jn 6:67). Peter answered, “Lord, to whom shall we go? You have the words of eternal life” (Jn 6:68). Peter believed that even the words of Jesus which made little sense offered eternal life.

Will you make that same pledge? Do you need to make Jesus the Lord of your life this morning?