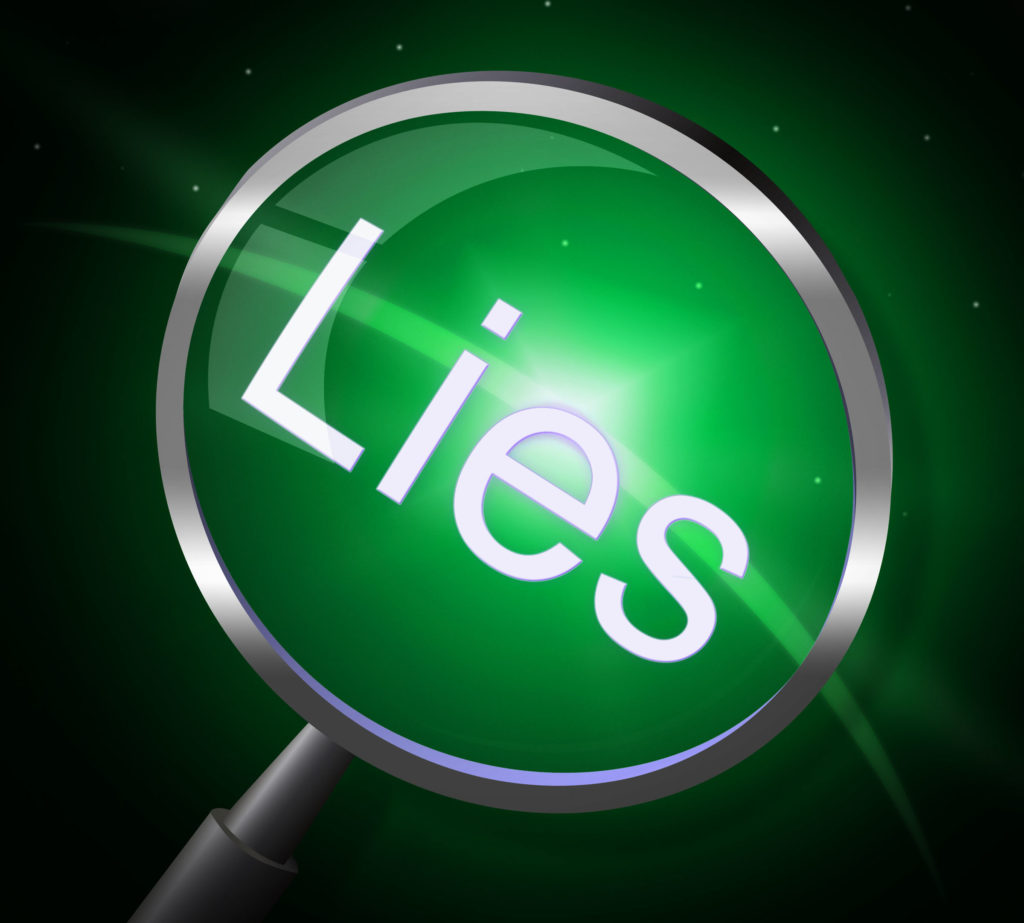 In Mark Twain’s fascinating book about his travels in the West and Hawaii, Roughing It, there is an account of a man, a notorious liar, who was known in the community to be a spinner of tall tales. No one believed a single word he said. One day they found him hanging dead, with a suicide note pinned on him, written in his own hand, and saying that he had taken his own life. However, the coroner pronounced the man’s death a murder. The coroner said that if the man himself said he had taken his own life, it was proof he hadn’t.

You have probably known people quite like that, people you just could not trust. Regardless of what these people said, you knew it simply couldn’t be the truth.

There is an old legend which tells why Satan chose to be a liar. According to the legend, there was a contest between the Serpent and the Slanderer. The two individuals were seeking first place among the armies of the Devil. Each felt himself to be worthy of that position and each claimed it over the other.

And so, it was to the Slanderer that Satan gave first place among the distinguished of his evil kingdom.

Satan is a slanderer, a liar, a murderer, a thief, and everything else that is evil. Tonight, we will think about a couple of passages where Jesus described Satan’s character.

Satan is a Murderer

“You are of your father the devil, and your will is to do your father’s desires. He was a murderer from the beginning” (Jn 8:44).

The first time we read of Satan in scripture, we find him in his position as a murderer.

When God placed man in the Garden, God told him, “You shall not eat of the fruit of the tree which is in the midst of the garden, neither shall you touch it, lest you die” (Gen 3:3). How could anyone misunderstand God’s instructions: Don’t you eat the fruit of that tree, don’t you touch the tree. If you do, you’ll die.

Notice, though, what Satan tells Even when he is tempting her: “You will not die” (Gen 3:4).

Yet, with the sin of Adam and Eve death entered this world. “As sin came into the world through one man and death through sin, and so death spread to all men because all men sinned” (Rom 5:12). Do you realize why we go down to the funeral home every now and then? It’s because there is sin in this world. Sin is in the world because of Satan. Thus, whenever anybody dies he is testifying to the fact that Satan is a murderer.

“Be sober, be watchful. Your adversary the devil prowls around like a roaring lion, seeking some one to devour” (1 Pet 5:8). The Greek term for “devour” literally means “to drink down.” The image is literally of an animal’s swallowing its prey whole. That’s exactly what Satan wants to do to you—to come to you and swallow you whole. He will use whatever means possible to destroy you and your life.

Satan murders many in this society.

Satan tempts some individuals to murder through envy.

Satan tempts some individuals to murder through lust.

Herod is a perfect example of murder through lust. When Herodias’ daughter danced before Herod, “she pleased Herod and his guests” (Mk 6:22). Herod told his stepdaughter and niece that he would give her anything she wanted, and she asked for the head of John the Baptizer. Wonder how many people are murdered today because of lust? How many husbands murder their wives because they have a girlfriend they want to marry? How many mothers murder their children because they have a boyfriend who doesn’t want to be tied down to children?

Satan tempts some individuals to murder through greed.

Ahab is a perfect example of murder through greed. Naboth had a vineyard that Ahab wanted, but Naboth refused to give it to the king. Jezebel came in and found Ahab depressed, and she told Ahab, “Just go kill Naboth and take his vineyard.” That’s exactly what Ahab did. Wonder how many people are murdered today because of greed? How many people rob someone and end up killing them in the process? How many individuals have had life insurance increased just before they were murdered?

Indeed, Satan is a murderer.

Satan is a Liar

“You are of your father the devil, and your will is to do your father’s desires. He was a murderer from the beginning, and has nothing to do with the truth, because there is no truth in him. When he lies, he speaks according to his own nature, for he is a liar and the father of lies” (Jn 8:44).

Satan is the father of lies. Satan is the one who told the first lie. When Eve told the serpent she and her husband were not to eat from the tree of the knowledge of good and evil lest they die, Satan said, “You will not die For God knows that when you eat of it your eyes will be opened, and you will be like God, knowing good and evil” (Gen 3:4-5). That lie resulted in sin coming into this world and death spreading to every single person. You and I are going to die because Eve believed that lie and thus brought sin into this world.

Satan has lied about sin since the very beginning of time. We are warned over and over about the lies Satan tells. “Even Satan disguises himself as an angel of light” (2 Cor 11:14). “Exhort one another every day, as long as it is called ‘today,’ that none of you may be hardened by the deceitfulness of sin” (Heb 3:13).

Let us not believe Satan’s lies! Let us rather put away sin!

“The thief comes only to steal and kill and destroy; I came that they may have lie, and have it abundantly.” The thief about whom Jesus speaks in this context is obviously not Satan. The thief would rather be a false messiah: “All who came before me are thieves and robbers; but the sheep did not heed them.” Jesus spoke these words in a time when many claimed to be the Messiah. But who was behind these false messiahs except Satan himself?

Satan will try to stead the rightful worship of God. “Again, the devil took him to a very high mountain, and showed him all the kingdoms of the world and the glory of them; and he said to him, ‘All these I will give you, if you will fall down and worship me’” (Matt 4:8-9). Satan said to Jesus, “Don’t worship God, you come and worship me.”

The admonition of James is worth hearing: “Submit yourselves therefore to God. Resist the devil and he will flee from you” (Js 4:7). Let us be those who resist the devil in order that he might flee from us! Do you need to come tonight and ask for our help in resisting the devil?