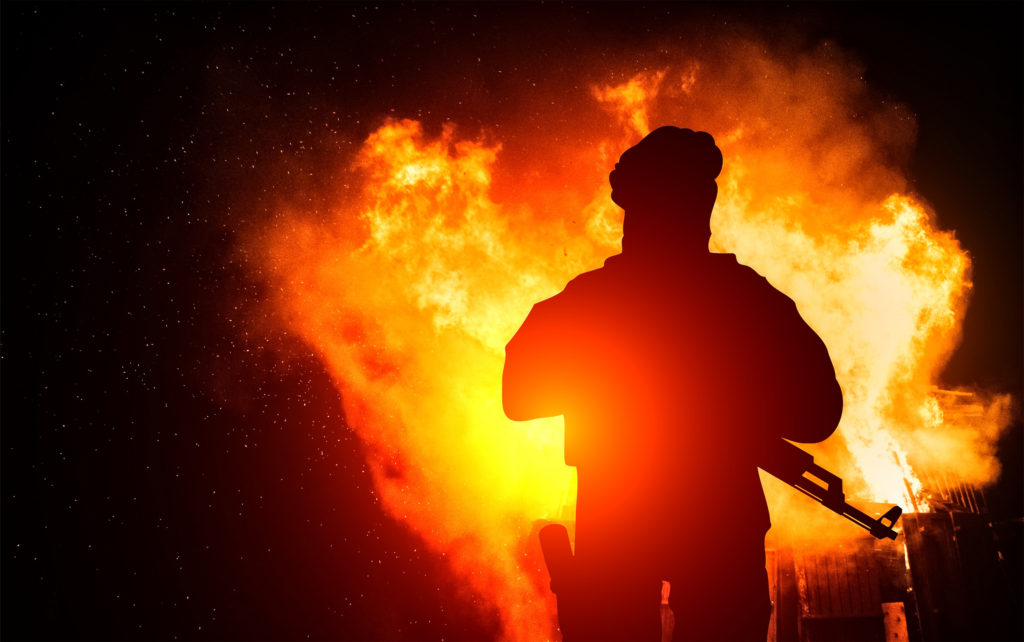 I have heard about war my whole life. I was born near the end of the Vietnam War. Both of my grandfathers fought in war—my father’s father fought in Africa and Italy during World War II and my mother’s father fought in the Korean Conflict. I grew up seeing pictures and hearing war stories. This country is currently involved in conflicts in Afghanistan and Iraq, we’ve bombed ISIS and Syria, and the war drums are beating loudly on the Korean Peninsula once more.

I have never fought in a physical combat, but since I became a Christian, I have been engaged in a spiritual combat. We Christians are engaged in a battle: “We do not wrestle against flesh and blood, but against the rulers, against the authorities, against the cosmic powers over this present darkness, against the spiritual forces of evil in the heavenly places” (Ephesians 6:12). Tonight, we want to study about the war in which we are engaged. John, in our text this evening, discusses this war.

In our text, we notice several similarities with the Exodus from Egypt.

When the dragon saw that he had been cast to the earth, he persecuted the woman who gave birth to the male child. When the dragon realized that he had lost his place in heaven and would not be able to regain it, he persecuted the woman. The woman here stands for Jewish Christians—remember the woman who gave birth to the child was the Jewish remnant looking for the Messiah, and after the birth of the child the woman comes to stand for Jewish Christians. Jewish Christians were, in fact, persecuted in the church’s early days. The apostles, all Jews, faced persecution, Stephen, a Jew, was murdered. After Stephen’s death, “there arose on that day a great persecution against the church in Jerusalem, and they were all scattered throughout the regions of Judea and Samaria” (Acts 8:1).

The dragon was enraged with the woman, and he went to make war with the rest of her offspring, who keep the commandments of God and have the testimony of Jesus Christ. The dragon became enraged with the woman. His rage was aroused because the woman found protection from God. The benefits God gives us causes Satan to become angry, enraged. Isn’t in some sense that a sweet thought? Isn’t it nice to know that our chief enemy becomes angry when God is so good to us?

The woman was given two wings of a great eagle, that she might fly into the wilderness to her place, where she is nourished for a time and times and half a time, from the presence of the serpent. The wings given to the woman symbolize divine deliverance and enablement – these wings allow this woman to escape from the dragon. She flies into the wilderness where she has a place prepared for her—we have already been told that this place in the wilderness has been prepared for this woman by God. She is nourished for 3 1/2 years – again we have already been told this in verse 6.

God provides for and protects his church. This had to be a great comfort to the early Christians who read this text—the dragon was trying to kill them, and he would succeed in killing many of them. But, God would protect them. God would not under every circumstance protect their bodies; God does not under every circumstance protect our bodies—he will allow us to be in a car accident and killed. But, God would not allow Satan to succeed in victory over his church. “I give them eternal life, and they will never perish, and no one will snatch them out of my hand” (John 10:28). Satan will not be able to do whatever he wants to us (remember again the example of Job); he has been defeated; we will have the victory.

The serpent spewed water out of his mouth like a flood after the woman, that he might cause her to be carried away by the flood. In the Old Testament, the flood is a common metaphor for overwhelming evil and tribulation. “The cords of death encompassed me; the torrents of destructions assailed me” (Psalm 18:4). “When you pass through the waters, I will be with you; and through the rivers, they shall not overwhelm you” (Isaiah 43:2).

The dragon unleashes severe persecution to gain victory over the woman. As you read the New Testament as well as Christian history, you see just how much persecution the dragon unleashed upon the church. The Hebrew Christians endured persecution (Hebrews 10:32-34). Paul sounded a solemn warning to Timothy: “All who desire to live a godly life in Christ Jesus will be persecuted” (2 Timothy 3:12). According to John Foxe who wrote Foxe’s Book of Martyrs in the Middle Ages, many persecutions came upon the church.

Certainly Satan, the dragon, used all available means to destroy the church.

But the earth helped the woman, and the earth opened its mouth and swallowed up the flood which the dragon had spewed out of his mouth. The earth helped the woman by opening to swallow the flood spewed by the dragon upon the woman. This again shows that God protects his church and her members. This demonstrates once more that God provides for his church and protects her and her members. Are you a member of that church where you have protection from Satan?