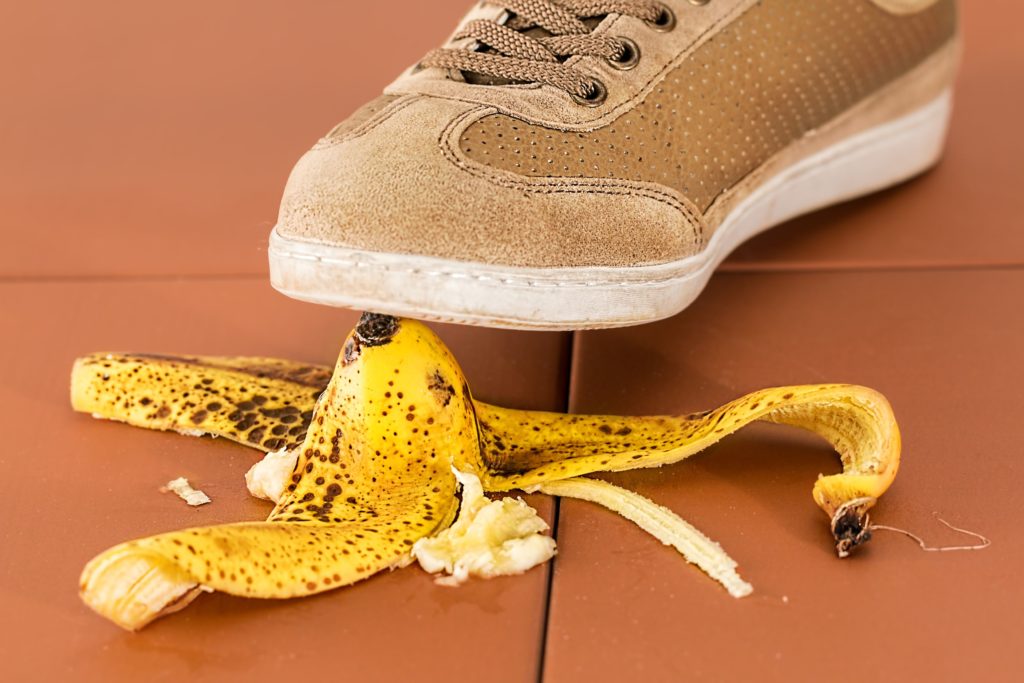 You remember the commercials: An elderly lady was lying on the floor. and she could not pull herself up. She, with an electronic alert device around her neck, would call for emergency personnel with the words, “I’ve fallen, and l can’t get up.”

Those alert devices serve a valuable service—I’m not too sure that an elderly person by himself/herself should be without one. But, those commercials, admittedly, were quite laughable.

As dangerous as falls can be, we laugh just about anytime anyone falls. Who has not struggled to keep a straight face when he saw someone fall in a parking lot? How many episodes of America’s Funniest Home Videos have been dedicated to humorous falls? Who hasn’t seen footage of Gerald Ford’s falling down the steps of Air Force One? John sees a fall that is not so humorous; rather the fall is quite serious. Tonight, let us examine the fall of Babylon the Great.

The Certainty of Babylon’s Fall, vv 1-2

The angel called out with a loud voice, “Fallen, fallen is Babylon the great!” The angels in Revelation are often depicted as having a loud voice; the loud voice allows these angels to be heard clearly by a great multitude. The angel cries, “Fallen, fallen is Babylon the great!” The cry shows that Babylon will be cut off and never return. The phrase “Fallen, fallen is so-and-so” originated as a funeral dirge and came to be used for cities which fell. The term “fall” was frequently used in a metaphorical sense in the ancient world to describe a person’s violent death, usually a violent death in war.

The verb “fallen” is in the aorist tense, which describes an event’s having taken place in the past. The verb’s usage in the aorist demonstrates that Babylon—i.e., Rome—would fall; there would be no way around it. The historical fall of Rome occurred in August of AD 410 when the city was pillaged by Alaric and his army of Goths.

Just as Rome’s judgment was certain, the judgment of all mankind is certain. “We must all appear before the judgment seat of Christ” (2 Corinthians 5:10). “It is appointed for man to die once, and after that comes judgment” (Hebrews 9:27). Are you ready for that judgment to come?

In verse 5, a voice from heaven continues to outline the reason for Babylon’s fall: “Her sins are heaped high as heaven, and God has remembered her iniquities.” This verse seems to be an allusion to Jeremiah 51:9, where Babylon’s judgment is pictured as reaching heaven.

The metaphor “high as heaven” is a hyperbolic way of expressing the magnitude of something. One’s sins reaching to heaven seems to imply that God’s sovereignty is threatened. Thus, Babylon’s sins are depicted as being of the utmost severity.

The Counsel of Babylon’s Fall, v 4

John heard a voice from heaven saying, “Come out of her, my people, lest you take part in her sins, lest you share in her plagues.” This voice from heaven must be divine—either the Father or Christ, for the voice refers to “my people.” This counsel, then, is divine; it comes directly from God.

The people of God needed to come out of Babylon for two reasons: lest you take part in her sins and lest you share in her plagues.

If the people of God remained in Babylon, they might take part in her sins. There is no doubt that if we surround ourselves with evildoers we ourselves might do evil. Deuteronomy 7:1-4—Because the Israelites failed to carry out this command, they were often troubled with un unfaithfulness to God. “When Solomon was old his wives turned away his heart after other gods, and his heart was not wholly true to the LORD his God, as was the heart of David his father” (1 Kings 11:4). “Do not be deceived: ‘Bad company ruins good morals’” (1 Corinthians 15:33). We need to be very careful lest we become involved in relationships which lead us further from God.

If the people of God remained in Babylon, they might share in her plagues. God was bringing destruction upon Babylon. and if the people of God shared in the sins of Babylon, they would share in her plagues. God wouldn’t say, “Wait a minute. These are my people. I won’t bring calamity upon them for their sins.” We also need to understand that Babylon was going to fall by war, and those in the city would not be safe.

The Coequality of Babylon’s Fall, vv 6-7

The divine voice makes abundantly clear here that what Babylon receives is just and right and fair.

The divine voice says. “Pay her back as she herself has paid back others, and repay her double for her deeds; mix a double portion for her in the cup she mixed.” The idea of paying the evil according to their mistreatment of others was a common concept in the Old Testament—remember: “an eye for an eye and a tooth for a tooth.” Paying someone double for his or her deeds indicated that the judgment would be more than complete.

Babylon said in her heart, “I sit as a queen, I am no widow, and mourning I shall never see.” Here Babylon, the whore, calls herself a queen—again this seems to be juxtaposed to the Bride of Christ, the true queen, at the end of the book. Babylon claimed to be no widow and boasted that she would never see mourning. Widows in ancient Israel were greatly disadvantaged, because they lacked the protection and financial support of a husband; they were often in abject poverty. Babylon believes that she would never see widowhood or destruction.

Babylon was proud. She thought she would never fall. No doubt, her misguided sense of security, at least in part, caused her fall. Pride can cause our downfall as well. “Pride goes before destruction, and a haughty spirit before a fall” (Proverbs 16:18). “Let anyone who thinks that he stands take heed lest he fall” (1 Corinthians 10:12). Will pride be your downfall?

The Consequences of Babylon’s Fall, v 8

Babylon’s plagues would come in a single day, pestilence and mourning and famine, and she shall be burned with fire.

Each of the plagues described here were associated with warfare in the Ancient Near East. Pestilence and famine were the common results of a prolonged siege. Mourning was linked with the death of the inhabitants. Burning a city with fire was often the final act of destruction by the conquerors of a city.

The idea is obvious—those who are unfaithful to God, as was this harlot, face severe consequences, punishment from God.

There would be many who might say, “Wait a minute! Rome is so powerful that she will never fall.” John answers that objection at the conclusion of this passage – “For mighty is the Lord God who has judged her” (v 8). Rome, as powerful as she was, was not powerful enough to stave off punishment from God.

There are many who might say, “Look, I don’t need to worry about judgment. I’ve got plenty of time to make a decision later.” Rome, and those around her, thought she was impenetrable; nothing bad could happen to her. However, great tragedy befell Rome, and she fell. As secure as people might think they are, they shall face the judgment of God, “for mighty is the Lord God who” judges them, Are you ready for that judgment?