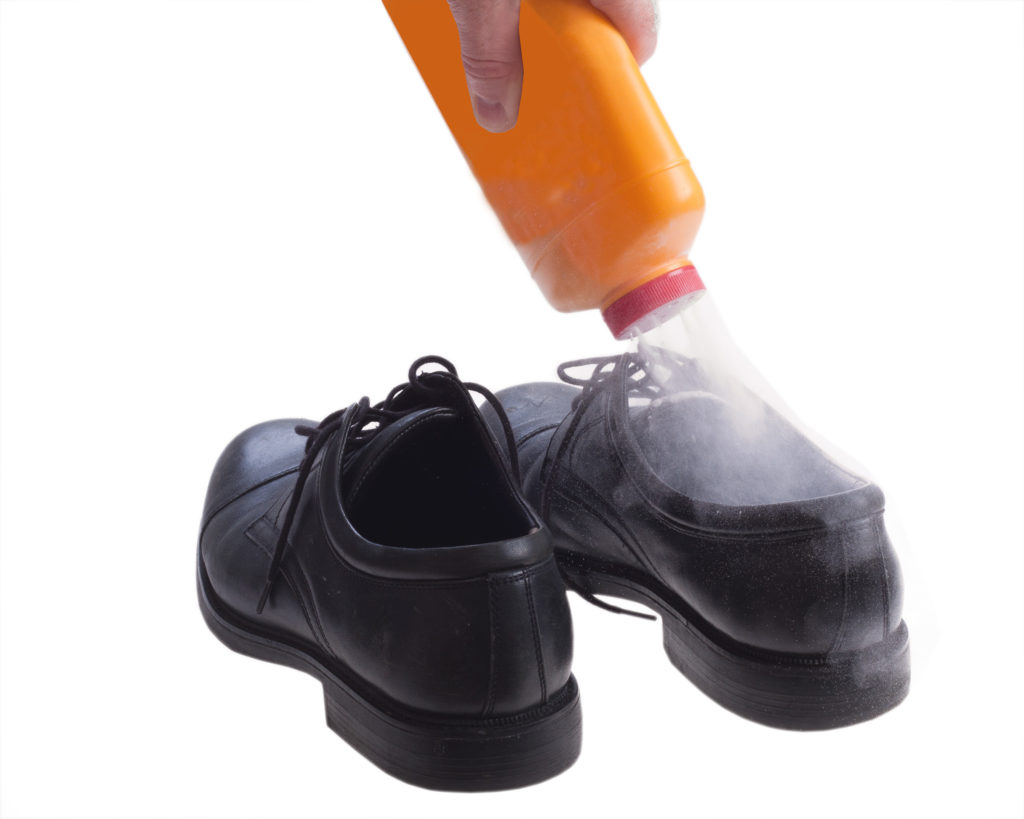 Suggested home remedies about for bad breath. One can brush his teeth twice a day with baking power, suck the juice from a cut lemon, chew a mouthful of sunflowers seeds and then drink water, gargle pineapple juice, eat parsley, or use dental floss that has been pre-soaked with tree seed oil. Wow!

Many of us struggle with smelly feet. When I was living at home, my brother Kyle would invariably take my shoes and place them on the back porch. Tammy does not permit my tennis shoes in our home, and if I sneak them in the house, they cannot be in the same room as she.

There are a host of home remedies maybe I should try. People can change their socks twice a day, dust their feet with absorbent cornstarch, take daily zin tablets, or slather antiperspirant on their soles and between their toes. But the most commonly suggested remedy for foot stench is to soak one’s feet in a black tea solution for 30 minutes each morning and evening until the smell slowly goes away over a couple of weeks.

Scientists have already told us that smelly feet and bad breath are caused by bacteria that proliferate in those areas of the body. But now British researches have isolated certain bacteria that eat those bacteria which cause bad breath. These potential stink-killers grow on and consume the smelly compounds found in the mouth and on the feet Imagine the potential commercial applications. Fill your mouth with bacteria to take care of that mouth full of bacteria. Or cover your feet with microorganisms to fix that sock full of microorganisms.

It seems odd to swallow insects to kill swallowed insects or to eat bacteria to kill other bacteria. But consider the similar absurdity of the biblical remedy for poisonous snake bites: Stare at a snake on a stake.

This passage, the fashioning of the bronze serpent, is one of the most famous in Numbers. This passage teaches us much about sin, some lessons we want to consider this morning.

The people traveled along the route to the Red Sea in order to go around Edom.

The king of Edom had recently rejected the Israelites’ appeal to go through Edom: “Edom came out against them with a large and powerful army. Since Edom refused to let them go through their territory, Israel turned away from them” (Num 20:20-21).

The people grew impatient at being forced to backtrack. When you take a lengthy trip with your children, how many times do they ask, “Are we there yet?” before you arrive? That’s the attitude of these Israelites: “Moses, are we there yet? Get us to the Promised Land and get us out of this wilderness.”

There was a little problem with that, though. Those growing impatient aren’t going to enter the Promised Land. Of the twelve spies Moses sent into Canaan, only Caleb and Joshua believed God could delivered the land to the Israelites. The other ten spies spread bad news around the camp by telling the Israelites God could not deliver that land into their hands. The LORD then said to Moses, “Not one of the men who saw my glory and the miraculous signs I performed in Egypt and in the desert but who disobeyed me and tested me ten times—not one of them will ever see the land I promised an oath to give to their forefathers” (Num 14:22-23). There is not reason for these people’s impatience—they’re not going to enter the Promised Land.

The people grumble against Moses and the Lord and say, “Why have you brought us up out of Egypt to die in the desert? There is no bread! There is no water! And we detest this miserable food!”

The Israelites speak evil, for they have neither bread nor water—but God had provided manna and quail for the Israelites (Ex 16), and he provided water for them (Ex 17:1-7).

But, the Israelites were tired of “this miserable food.” We all know what it’s like to get tired of food. Who wants turkey leftovers for days after Thanksgiving? What patient in a hospital loves the food brought to him? What student in school looks forward to “Cook’s Choice” day in the cafeteria?

At first glance, we may not want to condemn the Israelites for growing sick of manna and quail, but there’s a deeper issue here. Jesus compared himself to the bread coming down from heaven (Jn 6:32-33). God was showing his divine mercy and grace is giving manna and quail to the Israelites, but that wasn’t good enough for them—they were spurning God’s grace. Therefore, they were guilty of serious sin.

Sin was not just a problem the Israelites faced, but we face the same problem. “If we claim to be without sin, we deceive ourselves and the truth is not in us” (1 Jn 1:8).

Regardless of the specifics, we all sin just as did the Israelites.

Because the Israelites sinned, they had a sentence to face: “Then the LORD sent venomous snakes among them; they bit the people and many Israelites died.” The King James Version says the Lord sent “fiery serpents” among the people—“Fiery serpents” speaks of the burning of the venom as it entered the body’s tissue; this must have been a horribly painful death. Because the people sinned, they faced the painful death of venomous snakes.

We, like the Israelites, stand under a sentence of death for our sins. “The wages of sin is death” (Rom 6:23). “Do not be deceived: God cannot be mocked. A man reaps what he sows. The one who sows to please his [flesh], from [the flesh] will reap destruction” (Gal 6:7-8). “After desire has conceived, it gives birth to sin; and sin, when it is full-grown, gives birth to death” (Js 1:15).

A Christian man ended his marriage and, simultaneously, his relationship with his children—all for the love of another woman. Years later, the man confessed inconsolable remorse for what he had done, and his brother asked him, “Didn’t you count the cost?” The man replied, “Yes, I counted the cost, but I greatly understood the consequences.” Let us not greatly underestimate the consequences of sin, for the wages of sin is death.

Because the Israelites had sinned and died because of their sin, they needed salvation, salvation God offered.

First, the people confess their sins—“The people came to Moses and said, ‘We sinned when we spoke against the LORD and against you. Pray that the Lord will take the snakes away from us.’ So Moses prayed for the people.”

Confession of sin plays an important role in the forgiveness of a child of God. “Confess your sins to each other and pray for each other so that you may be healed. The prayer of a righteous man is powerful and effective” (Js 5:16). “If we confess our sins, he is faithful and just and will forgive us our sins and purify us from all unrighteousness” (1 Jn 1:9).

In 1884 Grover Cleveland was running against James G. Blaine for the Presidency. Blaine supporters discovered that Cleveland, who was a bachelor at that time, had fathered a son by Maria Crofts Halpin, an attractive widow who had been on friendly terms with several politicians. Subsequently, Republicans tried to pin an immorality tag on Democrat Cleveland by distributing handbills showing an infant labeled “One more vote for Cleveland” and by having paraders chant, “Ma, Ma, where’s my pa? Gone to the White House, Ha, Ha, Ha!”

The move, however, backfired badly. Rather than deny the story, Cleveland decided to tell the truth and admit the affair. His candor helped defuse the issue, and Cleveland was elected President.

What will we do with our sins? Will we deny them, or will we, like the Israelites and President Cleveland, admit our sins to God?

Additionally, the Israelites asked Moses to pray for them. When Simon the sorcerer fell back into sin after his conversion, Peter told him, “Repent of this wickedness and pray to the Lord. Perhaps he will forgive you for having such a thought in your heart” (Acts 8:22). How else can we confess our sins to God except through prayer? Do you need to come this morning and confess sin and pray to the Lord for forgiveness?

God, when he hears the prayers of Moses, told Moses, “Make a snake and put it on a pole; anyone who is bitten can look at it and live.”

How strange! The description of the plague seems to suggest that it was spreading quite rapidly, but Moses is to take the time to make a snake and put it on a pole. This violated one of the Ten Commandments—“You shall not make for yourself an idol in the form of anything in heaven above or on the earth beneath [which certainly included snakes] or in the waters below” (Ex 20:4). Few things are disliked in this world as snakes, but Moses is to make a big snake and tell people to look at it. In biblical culture, the snake became associated with evil, for Satan took the form of a snake to tempt Eve.

Why did God command Moses to do something which violated several taboos? What did the people call manna? “Detestable, miserable food.” God seems to say, “OK. You detest the food I graciously send you—Let me show you something truly detestable that I give to you out of my grace.”

This is not at all unlike the cross of Christ. Jesus himself made the comparison—“Just as Moses lifted up the snake in the desert, so the Son of Man must be lifted up, that everyone who believes in him may have eternal life” (Jn 3:14-15).

The cross of Jesus, on the surface, is not at all pleasant. “Christ redeemed us from the curse of the law by becoming a curse for us, for it is written: ‘Cursed is everyone who is hung on a tree’” (Gal 3:13). Thus, Jesus, by hanging on the cross, became cursed, cursed by God, for us. The physical aspect of the cross is not pleasant—from the loss of blood, to the suffocation, to the humiliation of being crucified naked for all the world to see.

But just as in the case of the bronze serpent in the wilderness, God takes something detestable, miserable and offers salvation through it. That says much about sin—no quick fixes, no simple solutions, but difficult and miserable choices.

Just like scientists have discovered that bad breath and smelly feet can be cured by applying bacteria, the Israelites could be healed of snake bites by looking at a snake and we can be cured of sin by looking upon One who became sin for us. Do you need to come this morning and look upon the One made sin for you?