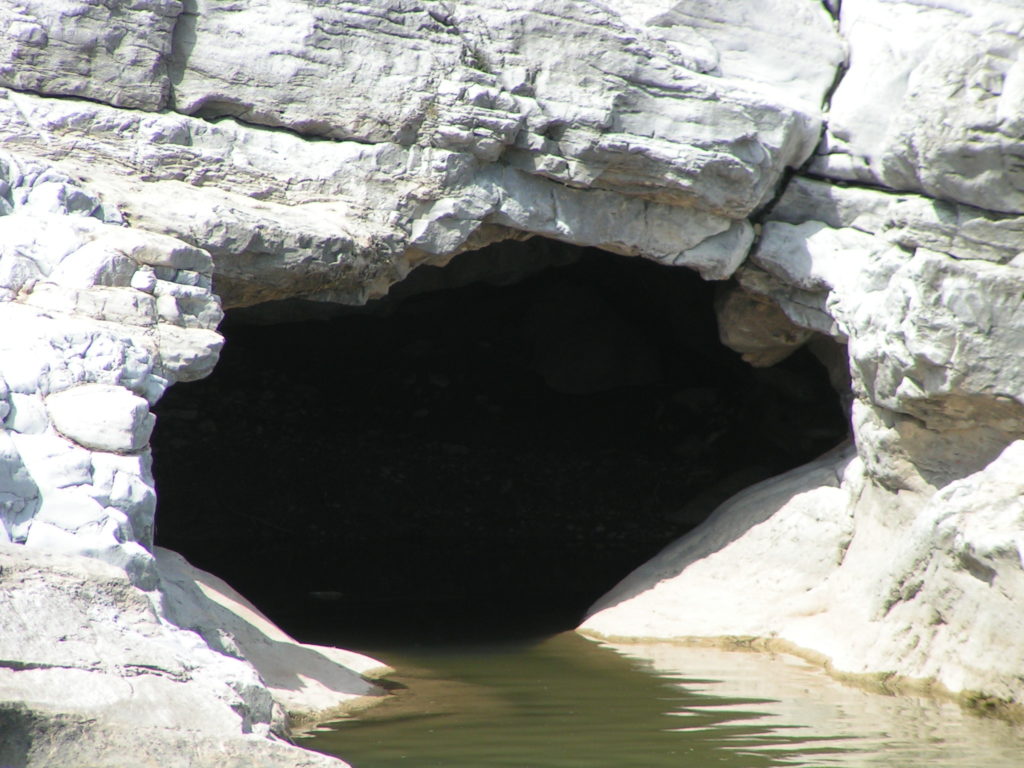 A couple years ago at Christmas, Tammy’s family had a more-than-frightening experience. We were on our way to Tammy’s parents to do the whole Christmas thing. Now, you must understand that Tammy’s mom has to do a very elaborate Christmas—with a whole host of different food (ham and turkey with all the fixings and so many deserts you can get diabetes just looking at them).

Tammy’s mom had asked her Dad to carry some food down to the railroad tracks (where they pour out their grease and stuff). On his way back to the house, he walked over the old septic tank; the roof gave way and down he went into that septic tank. That tank was full of old water and everything else, and Bob had to tread water to keep his head where he could breathe. He had a flashlight with him, so he was flicking it off and on so Tammy’s mom would see him, but she had every light in the house on, and she couldn’t see that flashlight.

Forty-five minutes or so after he had fallen into the tank, Tammy’s brother and his family arrive. They hear a very faint, “Help.” They’re able to find Bob and get him out of that pit.

It’s probably no surprise to you, but our family has had a lot of fun out of that. We’ve told a good many jokes about that incident and given Tammy’s dad a little bit of grief. I don’t need to tell you, however, that night could have turned very tragic. By the time Tammy’s brother got Bob out of that pit, he was greatly struggling to stay afloat.

Pits are very dangerous. I doubt that you’ve ever fallen into a septic tank, but you might have. But I imagine a good many of you have experienced something similar. Two or three of you worked in underground coal mines. I’ve heard many stories about how unnerving that can be when you realize how much earth is over you. Maybe you’ve gone down in a cave—Dixie Caverns or Mammoth Cave—and you were a little nervous before you could get out. As a kid, did you ever go down into a dark basement or storm cellar and worry about what you might find down there? Have you ever been on a crowded elevator that was slow to open? Did you start to get a little nervous?

Our passage is about some folks who ended up going down in a pit. I know the title of this sermon is “Life in the Pits,” but Korah and his cohorts did not live long in the pit! In fact, the pit was their tomb.

That pit became their tomb, for they dared rebel against Moses. Korah, himself a descendant of Levi (Num 16:1) like Moses and Aaron, seems to have been the ringleader. Dathan, Abiram, and On join the rebellion; they convince 250 others who were “men of renown” (Num 16:2) to join them.

They accuse Moses of exalting himself above the assembly of the LORD (Num 16:3). They complain because Moses led them out of Egypt, “a land flowing with milk and honey,” and has brought them into the wilderness (Num 16:13-14).

The rebellion, however, does not last long. Korah and his ilk rise against Moses, and Moses declares that the next morning God would show whom He regarded as holy (Num 16:6). You know how that went. Korah and his cohorts and all their families were consumed when the ground under their feet opened up. The 250 “men of renown” were consumed by fire from the presence of the LORD.

In this incident we discover that “Rejecting God’s leaders is rejecting God.” That is precisely what Moses says: “These men have rejected the LORD” (Num 16:30). Let’s see what serious consequences befall those who reject the LORD by rejecting His leaders.

Moses makes the case here that he is the LORD’s representative. Notice how Moses does that: four times in these three verses Moses mentions the LORD. The emphasis, therefore, is clearly on the LORD, not Moses.

The LORD sent Moses to do all that Moses had done. Moses, you recall, didn’t really want his position. Moses made a whole host of excuses:

God, however, refuses to take “No” as an answer. God even becomes angry: “The anger of the LORD was kindled against Moses” (Ex 4:14). It was God who put Moses in the position of leadership; if Moses had had his way, he would never have gone to Egypt.

Korah, however, wants leadership of all of Israel; however, only God could install a leader in Israel, and God had already done so with Moses.

Moses even spells out precisely how Korah and those with him will die. The only way Moses could have that knowledge is if God had told him.

It happened just as Moses had said—there could be no doubt but that God was with Moses.

The earth even received the families of the guilty parties. How could a loving God send those entire families down into the pit? Some ideas:

One: It’s possible that the families were as guilty as the cohorts; they may have urged Korah and his coconspirators.

Two: The purpose of this punishment was so that Israel would stand in fear, that they would understand once and for all that God was in charge. Therefore, severe punishment is meted out. There’s nothing in the text that indicates the families were eternally lost. It could very well be that God allowed them to die to get Israel to understand that He means business and that He took at least some of these folks to Paradise. I can’t see what’s unmerciful about that.

Israel received the message loud and clear: God is to be honored and His leaders heeded.

The Israelites ran away lest the pit swallow them also. Those Israelites did not wish to go down into the pit. However, 14,700 of them will die in a plague on the following day (Num 16:49). Why did they die in a plague? They grumbled against Moses and Aaron and accused them of killing Korah and his ilk (Num 16:41-50). Some people are just slow learners.

It would certainly be in our best interests not to be such slow learners. We need to know without a doubt that “Rejecting God’s leaders is rejecting God.”

I don’t believe a large pit will swallow us, but dire consequences still await. “Whoever resists the authority resists the ordinance of God, and those who resist will bring judgment on themselves” (Rom 13:2). It’s not entirely clear from that text if the judgment would be from God or the civil government. That really doesn’t matter in the context, for the government authority exercises authority from God.

You understand, I trust, that God declares we have many authorities over us at different times. When we come in to this world, our parents are over us (Eph 6:1). When we begin working for a living, our employers are over us (Eph 6:5). As long as we’re in this world, government officials have authority over us (1 Pet 3:13-17). When we become members of the body of Christ, the local elders “rule” over us (1 Tim 5:17).

Therefore, how should we look at this text and the implications in it? What we’re going to do this morning is apply this passage to the eldership and think about how we honor their leadership in this congregation.

We’re going to think of the eldership in light of this text for a couple reasons:

One: We are all under the elders of this congregation.

Some of you are still under the authority of your parents or employers but not all of you. I do want to make the text as universally applicable as possible.

Two: I believe that the scenario with Korah is easier to apply to the eldership than any other authority.

How can we apply the principle “Rejecting God’s leaders is rejecting God” to the eldership?

One: Understand that God has placed our elders in their position.

Paul to the Ephesian elders: “Take heed to yourselves and to all the flock, among which the Holy Spirit has made you overseers, to shepherd the church of God which He purchased with His own blood” (Acts 20:28). Churches may certainly select who their elders will be (Acts 6:2-6). The church chose the seven men, but the church did not install the first seven deacons. The apostles appointed them to that position. The implication seems to be that the apostles were acting under the guidance of the Holy Spirit.

The Holy Spirit has appointed our elders to their position.

Two: You do not accuse the elders of wrongdoing.

Korah and his co-conspirators accused Moses and paid a high price. They accuse Moses and Aaron of exalting themselves above the assembly of the LORD (Num 16:3). Dathan and Abiram accuse Moses of seeking to kill the Israelites in the wilderness (Num 16:13-14).

Three: If you disagree with the elders, do so privately.

Korah and the others in this text make a big deal out of disagreeing with the way Moses was leading the Israelites in the wilderness. When the people grumbled against Moses because he and Aaron had “killed the people of the LORD” (Num 16:41), a great plague fell upon the people and 14,700 people die. God doesn’t approve of grumbling among His people.

What do you do when you disagree with the elders?

You go to them alone.

Jesus taught us to take things to the one(s) with whom we have an issue. “If your brother sins against you, go and tell him his fault between you and him alone” (Matt 18:15). I know Jesus is talking about sin in that text, but I think the principle would still apply: Go talk things over with people privately.

Spreading rumors and innuendo throughout the congregation can have a very adverse effect on our work. About some women in Ephesus, Paul says, “They learn to be idle, wandering about from house to house, and not only idle but also gossips and busybodies, saying things which they ought not” (1 Tim 5:13). Let us not be among that number!

You realize you may not know the whole story.

There are many times that the elders operate behind the scenes about an issue or two, and you never know what’s taking place. Sometimes things need to be kept secret because someone could be seriously harmed by sharing information. Trust them!

You realize they are acting to the best of their ability for the kingdom of God.

That is what elders are supposed to be doing (Acts 20:28). I believe our elders do that very thing. I’m in a unique position to see our elders working for the kingdom. They both take kingdom work very, very seriously.

Four: Pray for the elders.

Paul urges prayers for “all who are in authority” (1 Tim 2:1-2). Yes, I believe that in the context Paul is talking about government authority; however, being an elder in the church of the living God is more important than being in a high position in government. Elders deal with matters of eternity; statesmen deal with matters that will soon fade. Elders guide the church for which Jesus shed His blood; statesmen guide nations that rise and fall. Elders serve the people of God; statesmen serve interest groups who will contribute for the next election cycle.