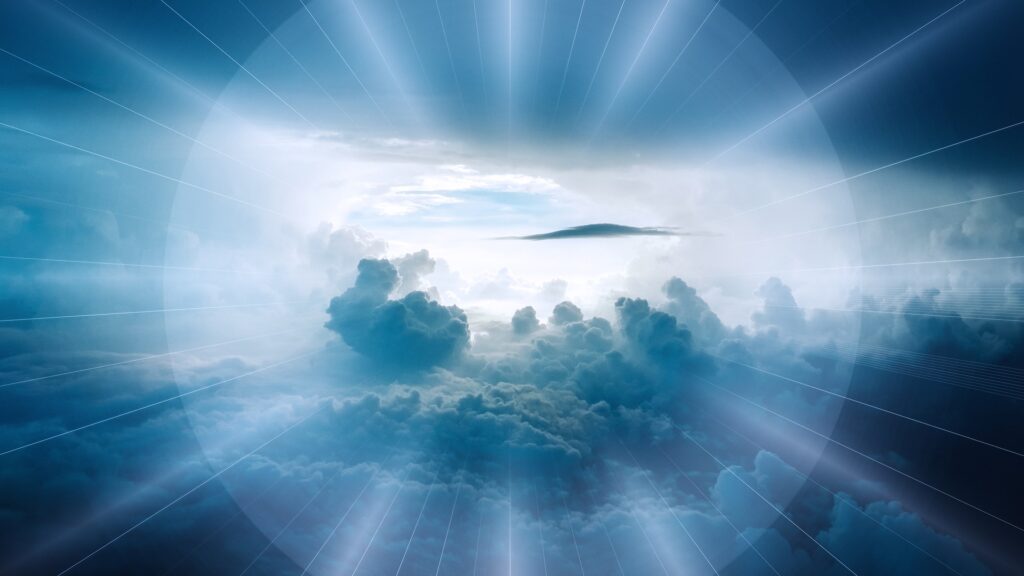 What is heaven going to be like? Some children gave their answers: Eric, age eight, said, “It is a place where there is a lot of money lying around. You could just pick it up, play with it, and buy things. I think I am going to buy a basketball, and I am going to play basketball with my great-great grandmother.” Scott said, ‘”Heaven is up in the sky, and you could look down at circuses for tree if you want to, except you have to ask God for permission first.” David, age seven, said, “Heaven is kind of big and they sit around playing harps. I don’t know how to play a harp, but I suppose I should learn how to play that dumb thing pretty soon.” Tommy, age seven, said, “I know what heaven is, but I don’t want to go there I want to go to North Carolina instead.”

Those children have much the same problem as do we – trying to describe a place we’ve never seen and where we’ve never been. Scripture offers scant information about that eternal place.

We don’t have a complete picture of heaven. I’m convinced that the reason some things about heaven cannot be told is that man couldn’t understand them if God revealed them to us – We have never experienced a totally spiritual place, because we dwell in a land of physical realities. However, we definitely know enough about heaven to want to go there. Wanting to go to heaven brings up the interesting question of: “Who Will Go to Heaven?” In this morning’s text, Jesus tells us who will go to heaven; Who will go to heaven?

Not Those Who Just Talk the Talk, v 21

Jesus said, “Not everyone who says to me, ‘Lord, Lord,’ will enter the kingdom of heaven, but only he who does the will of my Father who is in heaven.”

Throughout the New Testament, “lord” is a polite address, quite analogous to our use of “sir.” Speaking of wives’ being in submission to their husbands, Peter wrote, “They were submissive to their own husbands, like Sarah, who obeyed Abraham and called him her master” (1 Pet. 3:5-6). The King James Version says that Sarah called Abraham “lord” and the Greek New Testament has the word “lord,” the very same term we find in Matthew 7:21. I doubt seriously that the New International Version is correct when it says that Sarah referred to Abraham as her “master”; I think we’re talking about respect in the context of 1 Peter 3, so “sir” would be much more appropriate.

The “Lord, Lord” of this morning’s text doesn’t mean anything like “sir,” but it is an acknowledgement of Jesus’ deity. Throughout the New Testament, “Lord” refers to Jesus’ deity, his kingship, his being the Son of God. Only after the Resurrection, the proof that Jesus is the Son of God and Lord, did Thomas say, “My Lord and my God!” (Jn. 20:28). Jesus is Lord of all – Peter said to Cornelius and his household, “You know the message God sent to the people of Israel, telling the good news of peace through Jesus Christ, who is Lord of all” (Acts 10:36).

The designation “Lord” means that Christ is master. To the Romans, the word could mean “sir,” but could also have a heightened connotation. The emperors used the term to refer to their sovereignty, to their power. Undoubtedly, the New Testament uses the term in much the same manner to refer to Jesus – he is sovereign and has power. Those who heard Jesus would certainly have understood the term in that manner.

To the Jews, the word came to mean “God.” Because of the instruction not to take the Lord’s name in vain, the Jews were afraid to utter the divine Name. Therefore, when reading from the Hebrew Old Testament, when Jews came to the Name Yahweh, they would insert adonai, “Lord.” The Jews hearing this sermon would have well understood Jesus’ claim to be Lord – he’s claiming to be equal with God, he’s claiming to be divine.

We are to say, “Lord, Lord,” to acknowledge Jesus’ deity and sovereignty. “If you confess with your mouth, ‘Jesus is Lord,’ and believe in your heart that God raised him from the dead, you will be saved” (Rom. 10:9). “If anyone acknowledges that Jesus is the Son of God, God lives in him and he in God” (1 Jn. 4:15). Saying that Jesus is the Son of God is really the same as saying he is Lord.

But, words are so cheap, and the Lord knew that. Therefore, he says, “Not everyone who says to me, ‘Lord, Lord,’ will enter the kingdom of heaven, but only he who does the will of my Father who is in heaven”‘ (Matt. 7:21). In a very real sense, saying “Lord, Lord” should be enough to do the will of the Father, for that’s what we’re pledging to do when we say “Lord, Lord.” But, how many people have said, “Lord, Lord” but don’t do the Father’s will? How many people have come before this congregation and confessed that Jesus is Lord, were baptized into his death, but now live in the world? How many people have confessed their faith in Christ as Lord but are so deep in religious error that they do not do the will of God?

Many will say to Jesus in that day, “Lord, Lord, did we not prophesy in your name, and in your name drive out demons and perform many miracles?” There is the unmistakable conclusion from this passage that these individuals were religious – they performed miraculous acts in the name of Christ. There is absolutely no reason to see the prophesying, the driving out of demons, and the performing of miracles to be of any power other than the power of Christ. When King Saul was walking immorally, the Spirit of God came upon him and his men, and they prophesied (1 Sam. 19:20-24). Paul admitted that he himself could lose his salvation – “I beat my body and make it my slave so that after I have preached to others, I myself will not be disqualified for the prize” (1 Cor. 9:27).

From this passage, we see that being religious simply is not enough. Think of all the religious people in the New Testament who were not doing the will of God. There’s Cornelius. When the angel appeared to him, he said, “Your prayers and gifts to the poor have come up as a memorial offering before God” (Acts 10:4). Cornelius was a praying man and a man who cared for the poor, but he wasn’t fully doing the will of God. There’s Saul of Tarsus – a man who in his zeal to do the will of God was killing Christians. There were the Judaizers in Jerusalem who said that if Gentiles wanted to come to Christ, they had to obey the Law of Moses and submit to circumcision. Over in 3 John, there’s Diotrephes who wanted the prominent position in that local church and was causing all sorts of problems for John and the traveling missionaries.

Why were these religious people unacceptable to Christ? It obviously goes back to the previous verse where Jesus said the prerequisite to entering heaven was doing the will of his heavenly Father. But, aren’t religious people already doing the will of the heavenly Father? Oh, if only that were the case! The cases we’ve discussed: Cornelius, Saul of Tarsus, the Judaizers, and Diotrephes demonstrate that’s not always the case.

That’s significant for this discussion. Jesus doesn’t necessarily mean here that he never knew the person. He doesn’t mean that he never had a relationship with the person. He very well could have. But, Jesus says, “You’re behavior is such that you cannot enter heaven. I do not now have a relationship with you.” Here’s the significance of this: We might want to say, “Jesus is referring to those who were never Christians; he says, ‘I never knew you.’ He cannot, therefore, be referring to us Christians.” Oh, contraire. Jesus isn’t just discussing those who were never Christians, but he is also discussing those who were Christians but failed to do the Father’s will.

Notice that the Lord refers to these individuals as “evil doers.”‘ The will of the Lord is perfect and holy. Therefore, those who refuse to obey that will must be “evil doers.”

What about you? Will you stand before the Lord and hear him say, “I never knew you. Away from me, you evildoer!” Will you hear the Lord say, “Well done, good and faithful servant. Enter the joy of your Lord”?