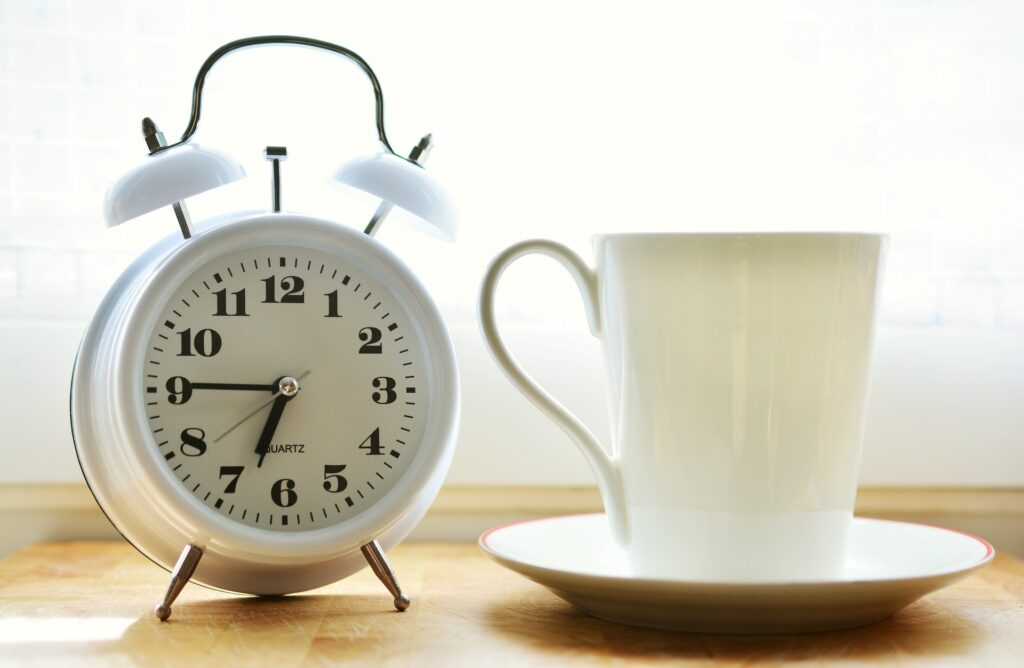 When I attended International Bible College in the 1990s, many of the students were from overseas. One fella who really sticks out in my memory is Andre Allen. Andre was from Jamaica, and that made life “interesting.” There were words — words I don’t feel comfortable saying from the pulpit — that meant one thing in Kingston and another thing in the United States. Andre would give free haircuts — I tried that once. The most interesting thing Andre would do was to bring a briefcase to our classes. There was nothing amusing about that — many of us had satchels or something we’d carry to class. But, Andre would put his briefcase on the desk, open it up, and put his head on the pillow he kept in that briefcase. Andre would sleep through every class. I don’t know how he graduated, but he did and with a decent GPA.

I don’t know about you, but I like to sleep. I’ve been caught napping on the job a time or two. I’ve told some of you, but in Owingsville, Kentucky, there was a very sweet lady who was able to come to worship about twice a month. She was at every single service she was able to attend, but sometimes her health prevented her from attending. Every time I went to see her I’d struggle to stay awake and sometimes I’d take a nap. She’d lament every time I went to see her that the last preacher slept every time he came, I slept every time I came, and she just didn’t understand why we young preachers couldn’t stay awake to talk. Well, Daisy would have every window shade drawn and not a single light on, she’d have her furnace set on about 85, and she’d insist that I sit in a nice recliner and put my feet up.

A week or so after Wil was born, of course, I wasn’t getting much sleep at night. I sat down in my chair at my desk, and the next thing I knew the phone was ringing. I answered in that groggy, sleepy voice, and I was teased for a good while about sleeping in the office.

Maybe you, too, have struggled with wakefulness a time or two. Perhaps it’s every Sunday as the preacher drones on and on. Maybe it’s during a continuing education class you need to take for work. Maybe it’s driving home from work after a long day. Perhaps it’s as you try to stay up to watch a movie on TV.

Jesus, in this morning’s text, talks about the need to wake up. Yes, all the virgins slept while waiting for the bridegroom, but they were vastly different in their ability to wake up and take care of things. In this parable, Jesus tells us we cannot ignore reality, go to sleep, and expect to enter into the joy of our Lord. The message of this Parable is simple: “Stay alert.”

At the time of Christ, the groom would come to the bride’s house to claim her from her parents. He would be accompanied by his friends, and the wedding would take place at the bride’s home. After the actual wedding ceremony, the groom would take his bride back to his home. It would be late when the groom led his bride to his home, so there would be a procession of their friends holding torches to light the way. The bride and groom would consummate their marriage that night, and the next day would start a large banquet that would last for seven days.

In this parable, the bride had ten bridesmaids. It’s highly unlikely that the number ten has any real significance; brides at this time had ten bridesmaids. Five of the bridesmaids were wise and five were foolish. The wise took oil with them for their lamps; the foolish took their lamps but did not bring oil. There’s a great deal of stuff written about the exact identification of the oil and the lamps. It doesn’t amount to a hill of beans the precise identity of the lamps and oil. While the bridegroom was delayed, the ten virgins slumbered and slept. Bridegrooms were notoriously late in the ancient world; therefore, it’s no surprise that the bridesmaids slept while waiting.

As the groom moved closer to the bride’s home, his coming would be repeatedly announced. The announcement would permit the bridal party to freshen up and trim their lamps before the bridegroom actually arrived.

The foolish virgins realize they do not have enough oil, and they ask for oil from the wise virgins. The wise virgins tell the foolish to go and buy for themselves. Believe it or not, there were stores that stayed open late, late into the night. Obviously, there would be a greater likelihood of finding a store doing business late at night in the city rather than in some village somewhere.

While the five foolish virgins are out buying oil, the bridegroom comes, and the wedding takes place.

When the foolish virgins return, they find the door has been shut. This is likely the groom’s home, but that’s not really important. Because they had insulted the dignity of the host, the five foolish virgins were not permitted to the wedding feast.

esus, our Bridegroom, declares that we must watch. The word translated “watch” has to do with being alert and wakeful. “If the master of the house had known what hour the thief would come, he would have watched and not allowed his house to be broken into” (Matt 24:43). In the Garden, when Jesus finds His disciples sleeping, He says to Peter, “What? Could you not watch with Me one hour?” (Matt 26:40). Therefore, “watching” has two important elements: Wakefulness and Attention.

We must be awake and alert, because we do not know when the Son of Man comes. I have a major problem with so-called “prophets” who predict the end of the world. When Jesus says no one knows that includes those “prophets.” Jesus said that He Himself did not know that day or hour: “Of that day and hour no one knows, not even the angels in heaven, nor the Son, but only the Father” (Mk 13:32). Because we do not know either the day nor the hour, we must be in a constant state of preparedness.

I know that to many people that would sound blasphemous. They would say things like: “We’re saved by the blood of Jesus.” “We’re saved by grace through faith.” “We can’t save ourselves; that’s why Jesus had to die.”

In the Bible, we’re told that many things save us. Jesus had to shed His blood for our forgiveness (Rom 5:9). We are saved through God’s marvelous grace through faith (Eph 2:8). Jesus certainly saves us (Matt 1:21).

It amazes me that people will find a verse that says faith or grace or Jesus’ blood saves and ignore other verses that add more pieces to that puzzle. I have often likened God’s plan of salvation to a jigsaw puzzle. You need to go several places to get the full picture.

You also find that truth expressed throughout Scripture. On the Day of Pentecost, Peter “bore witness and continued to exhort them, saying, ‘Save yourselves from this crooked generation’” (Acts 2:40, ESV). “Work out your own salvation with fear and trembling” (Phil 2:12).What does it mean to save ourselves? Let’s think about the opposite of saving ourselves for a minute. Have you ever known people who were raised in the church but who quickly fell away when they left home? Have you ever known a couple who were just as faithful as could be but when one spouse died the other fell away? Saving yourself has two serious elements: One: Making your faith your own; and Two: Obeying the word of the Lord.

Practically, how do you save yourself? You need to make your faith your own.

In a limited way, Jesus did this very thing. In Luke 2, the Lord goes missing, and His parents finally find Him in the temple discussing the Law. “Jesus increased in wisdom and stature, and in favor with God and men” (Lk 2:52). I understand that Jesus is the Son of God. Yet, growing “in favor with God” surely includes making Jesus’ faith His own.

Timothy did. “I call to remembrance the genuine faith that is in you, which dwelt first in your grandmother Lois and your mother Eunice, and I am persuaded is in you also” (2 Tim 1:5). Timothy had a “genuine faith” It had been passed down from previous generations, but his faith was his own.

How do you have a faith of your own? Think about why you believe. “Always be ready to give a defense to everyone who asks you a reason for the hope that is in you” (1 Pet 3:15). Take time this week to consider carefully why you have hope.

If you have trouble understanding why you believe, spend time in Scripture. Scripture was written that we may have faith. John 20:30-31. “Faith comes by hearing, and hearing by the word of God” (Rom 10:17). Spend plenty of time in the Word that your faith may grow. Set aside time to read Scripture every day.

Don’t be afraid to question. Many people seem to have an idea that it is wrong to question our faith. In an honest heart, truth will always win over error. You find several examples in Scripture of doubts that are washed away in the light of God’s truth: Jesus on the cross asked, “Why?”; Job questioned throughout his ordeal; Thomas refused to believe until he had an encounter with Jesus; after the resurrection, the apostles doubted (Matt 28:17). In a miraculous age, John wrote: “Do not believe every spirit, but test the spirits, whether they are of God” (1 Jn 4:1). Apply that idea to Scripture: Test the promises of God, test the premises of Scripture, test the truthfulness of Scripture. Your faith will grow, and you will be grateful that you did.

Jesus urges His hearers to be prepared when He returns. “Prepare to meet your God, O Israel!” (Amos 4:12). In the context of Amos, the prophet is urging the people of the Northern Kingdom to be prepared for the impending Assyrian invasion. However, the idea of preparing for God’s judgment is just as valid in the context of the Lord’s final coming as it was when Amos was talking about the Assyrian invaders.

We must be prepared. Noah prepared himself against the judgment of God as he constructed the ark. Heaven is a prepared place (Jn 14:2) for prepared people. John sees a whole host of people adorned in white before the throne of God. John wonders who they are, and one of the elders tells him that they “washed their robes and made them white in the blood of the Lamb” (Rev 7:14). Are your filthy garments washed in the blood of the Lamb?

Are you ready? Do you know beyond any doubt that if the Lord were to come right now that you would go to heaven? If you can’t say, “Yes” to that question, you need to save yourself through the atoning work of Jesus Christ!

Do you need to come this morning and prepare to meet the Lord?