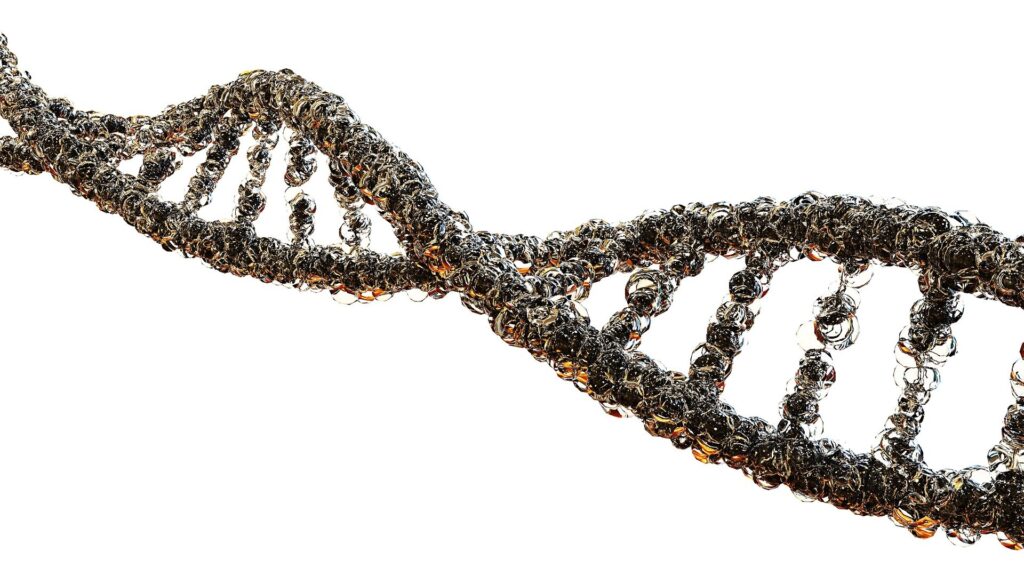 Quite frankly, the fact that we need paternity testing demonstrates how woefully corrupt our society is. I cannot even imagine ever wanting a paternity test for my two kids and I’m sure there’s not a guy here who has ever worried about whether or not you really are the father of your children.

But, we read of a guy who really would have liked some DNA-testing—Joseph! “When [Jesus’] mother Mary had been betrothed to Joseph, before they came together she was found to be with child from the Holy Spirit. And her husband Joseph, being a just man and unwilling to put her to shame, resolved to divorce her quietly” (Matt 1:18-19). Joseph and Mary were planning on getting married. But, before they are married and consummate the relationship, Mary turns up with child.

We know the Child was conceived of the Holy Spirit and Joseph will soon discover that for himself, but he doesn’t understand that at first. I’m sure Mary told Joseph that Jesus was conceived miraculously but remember God has been silent for 400 years—only with the birth of John does God begin to break that silence—and, remember there was never another child born without both father and mother. I’m sure that whatever Mary told Joseph seemed to him to be an ill-conceived excuse. Imagine if this narrative took place in a time of technology such as ours. Joseph really wants to know who the father of this baby is, so Mary goes to her doctor for amniocentesis. The ob/gyn sends off the cells and then gets a report back. Can you even imagine the call she would have made to Mary to come into the office? “Mary, we need to talk. This Child has no biological father!”

I really do wonder what modern DNA testing would have said about Jesus’ origin. Matthew, as he begins his gospel, fails to answer that question, but he does provide the DNA line of Jesus all the way back to Abraham. Because verse 16 mentions Jacob as the father of Joseph, the genealogy we have in Matthew is likely the genealogy of Joseph. Although, as Matthew records, Joseph was not Jesus’ biological father, he could have adopted him, and, in this time period, the genealogy of an adopted father became the child’s genealogy. Prior to the destruction of Jerusalem in AD 70, the genealogies of important people—including those of royal descent—were kept in the temple. So, when this Gospel was written, people could have gone to the temple to examine Jesus’ genealogy.

This morning, we begin a study of the Book of Matthew, and the most obvious place to start is at the beginning. We often skip over the genealogies in the Bible. We do so because: (1) We have a hard time pronouncing the names and (2) We don’t place the value on genealogies that former societies did. However, if every word of Scripture is inspired (as it surely is), then even these genealogies are the word of God. The purpose of this genealogy is to establish that Jesus is Jewish as the son of Abraham and that he is the promised Messiah as the son of David. This morning, with that purpose in mind, let us look at “THE DNA OF JESUS CHRIST.”

On January 20, 2017, Donald J. Trump was inaugurated as the 45th President of the United States. Presidential Inaugurations often mark the beginning of a new era. Two Presidents well captured the sentiment of a new era in their inaugural addresses. Ironically, they are John F. Kennedy and Richard M. Nixon who fought that hotly contested race of 1960.

Matthew begins his book with an inauguration of a new era in world history. He begins: “The book of the genealogy of Jesus Christ, the son of David, the son of Abraham” (v 1). Those words are an inauguration, a new beginning. You see, the record of human history begins with precisely the same words: “This is the book of the generations of Adam. When God created man, he made him in the likeness of God” (Gen 5:1). While our English translations may read somewhat differently between Genesis 5:1 and Matthew 1:1, the Greek Old Testament—which the Jews of Matthew’s day would have known—and the Greek of Matthew 1:1 read the same. Matthew’s point is likely: Just as the genealogy of Adam begins the history of God’s people, so the genealogy of Jesus begins a new history of God’s people.

Jesus’ DNA is inaugural DNA—it brings about a new era in the history of God’s dealings with man. Throughout the Gospels, we have the idea that Jesus’ brought a new era.

Notice in all those texts we have the common theme that a new day has dawned: the poor have light and have the good news and liberty proclaimed to them. You and I live in an inaugural era: an era of new hope, new life, and new forgiveness. Because Jesus brought about a new history in the people of God, we can start anew: “If anyone is in Christ, he is a new creation. The old has passed away behold, the new has come” (2 Cor 5:17). Because we live in a new era, we can have a new relationship with God: “See what kind of love the Father has given to us, that we should be called children of God; and so we are” (1 Jn 3:1).

Are you living with all the benefits of Jesus’ Inaugural DNA?

Jesus’ DNA is imperial—i.e., royal—DNA. He is descended from King David. Because of the prophecies that the Messiah would descend from David, the Jews began to refer to the Messiah as “the Son of David.”

Therefore, the fact that Jesus has “Imperial DNA” establishes him as the Messiah. Matthew refers to Jesus as the Messiah as he begins the book and then he demonstrates that Jesus is the “son of David” to prove that assertion. “Christ” is used in Scripture more as a title than a name. The Greek “Christ” and the Hebrew “Messiah” both mean “Anointed One.” The term refers to the anointing of prophets, priests, and kings in the Old Testament to demonstrate that God had chosen them for a task. As the Christ, Jesus is the One whom God has anointed to bring his message to the world.

If you had skidded off the road this morning on your way here and called your insurance agent and he were to say, “Yeah, you paid for that coverage, but we’re not going to honor your contract,” what would you do? Wouldn’t you call the Attorney General, the Better Business Bureau, and get the company to pay? You’re insured—the company has made a promise and you expect them to keep it.

So, it is with the promises of God. God had made promises to Abraham and the reference to the “son of Abraham” informs the reader that God is keeping his promise. “I will bless those who bless you, and him who dishonors you I will curse, and in you all the families of the earth shall be blessed” (Gen 12:3). After Abraham’s sacrifice of Isaac, God says to him, “In your offspring shall all the nations of the earth be blessed, because you have obeyed my voice” (Gen 22:18).

What a privilege it is to serve a God who keeps his promises! Abraham became such a bulwark of the faith because he was “fully convinced that God was able to do what he had promised” (Gen 4:21). As Solomon dedicates the temple, the wise king says, “Blessed be the LORD who has given rest to his people Israel, according to all that he promised. Not one word has failed of all his good promise, which he spoke by Moses his servant” (1 Ki 8:56).

Booker T. Washington describes meeting an ex-slave from Virginia in his book Up From Slavery.

I found that this man had made a contract with his master, two or three years previous to the Emancipation Proclamation, to the effect that the slave was to be permitted to buy himself, by paying so much per year for his body; and while he was paying for himself, he was permitted to labor where and for whom he pleased. Finding that he could secure better wages in Ohio, he went there. When freedom came, he was still in debt to his master some three hundred dollars. Notwithstanding that the Emancipation Proclamation freed him from any obligation to his master, this black man walked the greater portion of the distance back to where his old master lived in Virginia, and placed the last dollar, with interest, in his hands. In talking to me about this, the man told me that he knew that he did not have to pay his debt, but that he had given his word to his master, and his word he had never broken. He felt that he could not enjoy his freedom till he had fulfilled his promise.

That’s the type of faithfulness our God has demonstrated! He never walked from Ohio to Virginia, but he has done so much more! He informed a young virgin that she was going to be a mother; he demonstrated that Jesus was his Son by giving sight to the blind, allowing the lame to walk and the deaf to hear; he caused the sun to quit shining while the perfect Lamb of God died for our sins; and he moved a stone thereby allowing his once-dead Son to conquer death! Oh, the promises of God!

There is likely not a one of us here this morning who doesn’t have some quirk in his or her DNA. We have likely all inherited some little imperfection. I am one of three brothers, and three of us—along with Dad—have hiatal hernias. Accident? I think not.

Jesus has imperfect DNA. The people who make up his family tree here are full of problems—Judah went in to Tamar thinking that she was a prostitute and David had an affair and committed murder. They were full of problems.

Honestly, however, the women mentioned in this genealogy demonstrate the imperfections in Jesus’ DNA far better than do the men. Because Jews traced their ancestry from their fathers, genealogies did not need to include women. But, Matthew does include women here and these are not at all women you’d expect to find in the Messiah’s genealogy. Every single woman here—every single one—is a Gentile or married to a Gentile. Tamar was from Canaan; Rahab was from Jericho; and Ruth was from Moab. Bathsheba was married to a Hittite. Even if she were a Jew, she had married a Gentile in violation of God’s covenant.

Why would Matthew include these four women in the genealogy of Jesus?