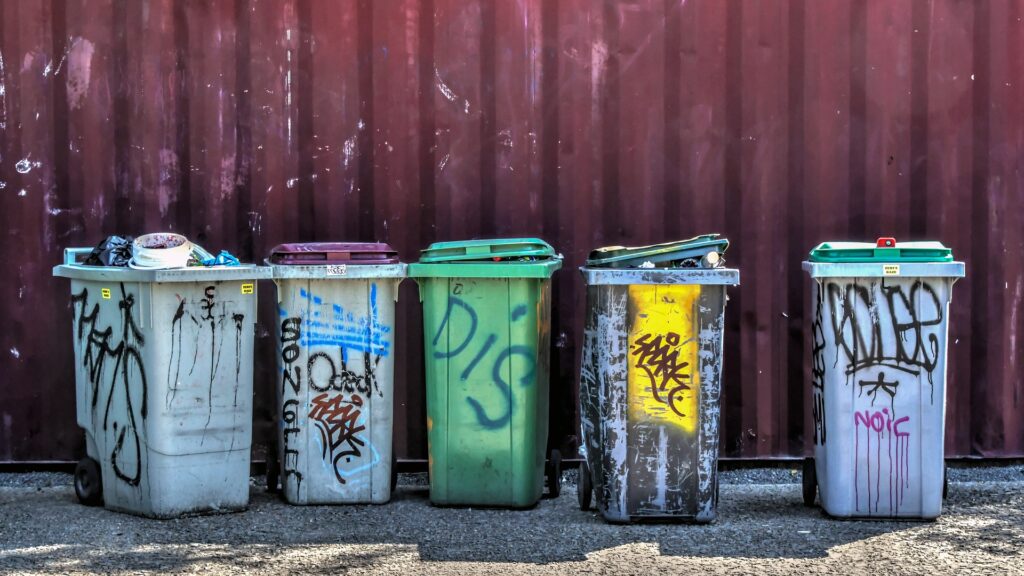 Last year, Brian Scudamore was named entrepreneur of the year by the International Franchise Association. In 1989, right out of high school, Scudamore started his company 1-800-GOT JUNK? with $700 and an old beat-up pick-up truck. Today, the company has 96 franchise partners across North America and they are in 47 of North America’s top 50 cities. He says, “With a vision of creating the ‘FedEx’ of junk removal, I dropped out of university with just one year left to become a full-time JUNKMAN! Yes, my father, a liver transplant surgeon, was not impressed to say the least. He is on my side now.”

We must, however, not confuse what the Lord says here with a healthy and wholesome sexuality. The normal and healthy sexual appetite is part of God’s creation. It was God, after all, who created us as man and woman, thus endowing us with a sexual appetite. When God brought Eve to Adam, Adam says, “This at last is bone of my bones and flesh of my flesh; she shall be called Woman, because she was taken out of Man” (Gen 2:23). Adam has been all alone-God even paraded different animals before the man so that Adam realized just how alone he was in this world. While he expresses his relief that he is no longer alone, Adam speaks of the woman in physical terms—“bone of my bones and flesh of my flesh.”

Solomon even urges his son to enjoy his wife physically: “Let your fountain be blessed, and rejoice in the wife of your youth, a lovely deer, a graceful doe. Let her breasts fill you at all times with delight; be intoxicated always in her love” (Prov 5:18-19). The New Testament teaches that husbands and wives have an obligation to fill one another’s sexual appetite: “The husband should give to his wife her conjugal rights, and likewise the wife to her husband. For the wife does not have authority over her own body, but the husband does. Likewise the husband does not have authority over his own body, but the wife does. Do not deprive one another, except perhaps by agreement for a limited time, that you may devote yourselves to prayer; but then come together again” (1 Cor 7:3-5).

“You have heard that it was said, ‘You shall not commit adultery.’ But I say to you that everyone who looks at a woman with lustful intent has already committed adultery with her in his heart.”

Yet, from the words of Jesus and from what we know of the scribes and Pharisees, it’s safe to believe that many had accepted the idea that they could push the envelope as far as they wanted as long as they didn’t have extra-marital intercourse. You, no doubt, recall that several years ago, Bill Clinton had an illicit affair, but he denied that he had sexual relations with Monica Lewinski. The President honestly believed that he had not been sexually involved with Lewinski, because he had “re-defined” sex. Such a redefinition salved his conscience and allowed him to give what he believed were truthful answers under oath. Apparently, the scribes and Pharisees had done something quite comparable-they could do this or that without it’s actually being adulterous.

But, Jesus, as he does throughout the Sermon on the Mount, raises the ante and says, “I say to you that everyone who looks at a woman with lustful intent has already committed adultery with her in his heart.” It’s remarkable that Jesus says, “Whoever looks at a woman.” In Jesus’ day, people considered women the guilty ones in regard to adultery. You recall that when some scribes and Pharisees wanted to trick Jesus, they brought a woman who had been caught in adultery. The people believed it was a seducing woman who led men astray; the men in this patriarchal society were far above lustful thoughts.

Jesus is here saying that men are just as culpable of sexual immorality as women. Jesus is going to speak of immoral women in the next paragraph: “Everyone who divorces his wife, except on the ground of sexual immorality, makes her commit adultery” (v 32). The point is that both sexes are equally capable of committing adultery-the blame doesn’t rest on just one gender.

It is the one who looks at a women with lustful intent that Jesus condemns. The English Standard Version does an excellent job of translating this passage. The Greek literally reads: “for the purpose of lusting after her.” The idea isn’t that you see a woman have a momentary lustful thought. David is a good illustration of this. “It happened, late one afternoon, when David arose from his couch and was walking on the roof of the king’s house, that he saw from the roof a woman bathing; and the woman was very beautiful” (2 Sam 11:2). In that verse, we aren’t told of a single sin David committed-he accidentally saw a beautiful woman bathing. But, of course, David which much further and not only lusted, he committed physical adultery and even killed Bathsheba’s husband to cover up his crime. Martin Luther once said: “You can’t keep a bird from flying over your head. But, you can keep him from building a nest in your hair.” Jesus’ is speaking of allowing the bird to build his nest!

Jesus condemns the looking with lustful intent, for actions begin in the heart. “What comes out of the mouth proceeds from the heart, and this defiles a person” (Matt 15:18). “The good person out of the good treasure of his heart produces good, and the evil person out of his evil treasure produces evil, for out of the abundance of the heart his mouth speaks” (Lk 6:45). Because our actions proceed out of the heart, the one who has purposefully looked a woman for the purpose of lust has already committed adultery in his heart. His heart is defiled before God.

Because of lustful thoughts, we need:

Jesus mentions the “right” eye and the “right” hand, because the right side was understood, in that era, to be more important and more powerful than the left side.

Jesus says that we need to separate ourselves from the trash to avoid being thrown into hell. It’s easy to read these verses and say that Jesus is simply being hyperbolic and not grasp that full import of these words. It has been reported that Origen, a leader in the third century church, castrated himself because Jesus spoke of those who chose to become eunuchs for the kingdom of heaven. Is that what Jesus meant that we should do? The people of Jesus’ day would have been more surprised to hear of Jesus’ speaking of committing adultery in the heart than they would have been at these words. The plucking out of one’s eye was a common punishment for sexual sin in Jesus’ day. The cutting off of the hand was a common punishment for stealing, including stealing one’s wife.

If the removal of organs was common in Jesus’ day, how does this impact us? Should we line up to have our right eyes cut out and our right hands cut off? The key is really in why Jesus says we should rid ourselves of our eye and hand: “It is better that you lose one of your members than that your whole body be thrown into hell.” This physical world and all its pleasures are passing away. “The day of the Lord will come like a thief, and then the heavens will pass away with a roar, and the heavenly bodies will be burned up and dissolved, and the earth and the works that are done on it will be exposed” (2 Pet 3:10). “The world is passing away along with its desires” (1 Jn 2:17).

What occurs in this world is ever so temporary. Any pleasure we might achieve through illicit sexuality will lead to guilt and grief in the morning and to hell eternally. What’s better? To walk by the Spirit-no matter how difficult-and reap the rewards of eternal life, or to give in to our flesh for a momentary pleasure and reap torment eternal?

How do we TAKE OUT THE TRASH?

We determine how we shall use our eyes.

In defending his integrity, Job says, “I have made a covenant with my eyes; how then could I gaze at a virgin?” (Job 31:1).Like Job, we must make a covenant with our eyes to keep them from wandering. We must determine what we’ll watch on TV, surf on the Internet, how close we’ll get with co-workers and friends.

A very consistent message of Scripture is that we don’t play with sexual temptation. “Can a man carry fire next to his chest and his clothes not be burned? Or can one walk on hot coals and his feet not be scorched? So is he who goes in to his neighbor’s wife; none who touches her will go unpunished” (Prov 6:27-29). “Flee from sexual immorality. Every other sin a person commits is outside the body, but the sexually immoral person sins against his own body” (1 Cor 6:18).The story is told that a well-known preacher in our brotherhood-if I were to mention his name, you’d it-was holding a Gospel Meeting and staying with a husband and wife. One evening, the husband had to go on a business trip, and the brother reluctantly agreed to stay with the lady alone. After they arrived home following that evening’s services, she went to the bathroom, came out wearing some skimpy clothing, and started making advances. The brother immediately got down on his knees and began to pray.

If we are married, we find sexual fulfillment with our spouse.

I’m fully aware that such language may make some of us uncomfortable, but it’s Scripture. “Do not deprive one another, except perhaps by agreement for a limited time, that you may devote yourselves to prayer; but then come together again, so that Satan may not tempt you because of your lack of self-control” (1 Cor 7:5). “Let your fountain be blessed, and rejoice in the wife of your youth, a lovely deer, a graceful doe. Let her breasts fill you at all times with delight; be intoxicated always in her love” (Prov 5:18-19).Sexuality within marriage is one of the best ways to keep our eyes from wandering.

We absolutely must understand that sexuality outside of marriage just isn’t worth the cost.

There can be great costs for immorality-disease, guilt, a ruined reputation, a ruined marriage, and hell.

We love God more than anything else in this world.

“You shall love the Lord your God with all your heart and with all your soul and with all your mind. This is the great and first commandment” (Matt 22:37-38).If I love God with my entire being-as Jesus here instructs-I’ll have no room in my heart for sin, sexual sin or any sin. But, how much do I love God? Am I willing to give up the pleasures of this world because I love him with my all? Are you loving God with your all?