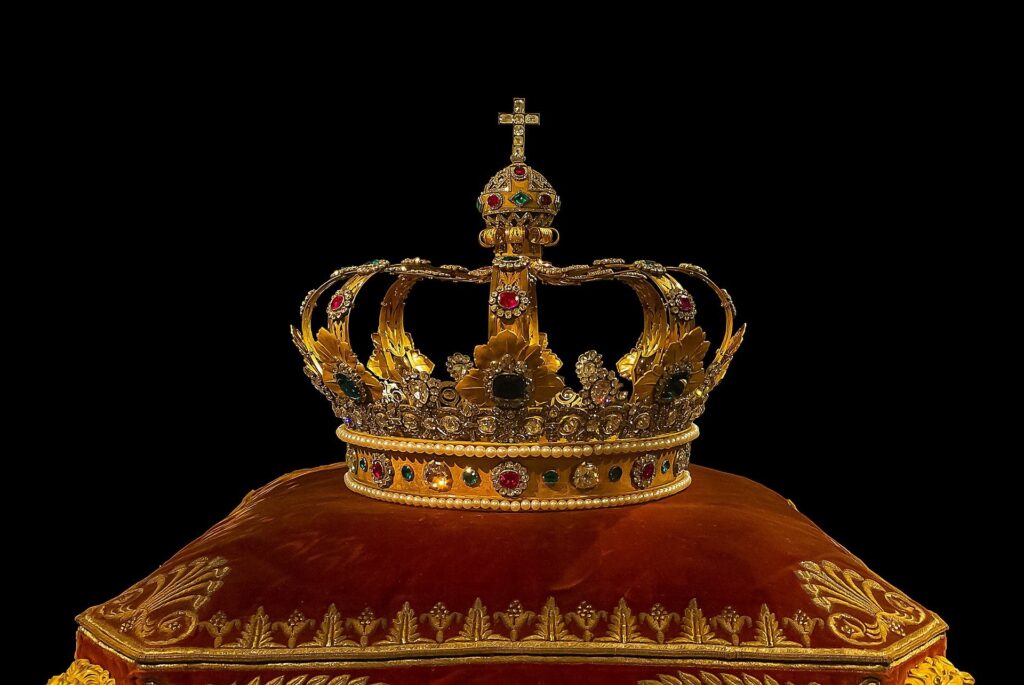 If you know anything about Queen Elizabeth II, you know that she loves horses and horse racing. If you know much about horse racing, you know that Kentucky is the place to breed and racehorses. I don’t know if it’s still true or not, but when I was growing up just outside of Lexington, the Queen owned several horses in the Lexington area. She had never seen many of those horses in person, and she decided it was high time she do so. Before you knew it, the Queen of England was coming to Lexington.

I was ten when the Queen came, and I can remember how excited everyone in Lexington was. The visit was a private vacation for the Queen after touring Canada, but Lexington rolled out the “red carpet” in a big way. Everywhere you went in the city there were the Stars and Stripes alongside the Union Jack. I can remember that Dad watched the news when he came in from work. We kids obviously didn’t care anything about the news. But, I still remember how everything was about the Queen’s visit.

In this text, someone very famous comes to town. The passage isn’t about the Queen of England coming to visit her horses or the President of the United States coming to win more votes or a singer coming to sell a few records. The passage is about the King of everything entering Jerusalem to lay down His life for the sins of the world. Matthew presents Jesus as King. From the opening of his Gospel where the magi follow a star and present gifts to the Christ Child to the ending of the Gospel where Jesus has all authority, Matthew says that Jesus Christ is King. That’s the point of this morning’s text: “Jesus Christ is King.”

As Jesus and His disciples drew near to Jerusalem, He sent two of them into town to fetch a donkey and her colt. Unless they were very wealthy, people in the first century walked everywhere they went. This is the only example in the Gospels where Jesus rode an animal.

So, if only the very wealthy rode on animals and we have no record that Jesus rode on any other animal, why did He ride on a donkey into Jerusalem? Because this establishes Him as the King! Solomon rode a mule when he entered Jerusalem to be anointed as king (1 Ki 1:38-40). By dying for our sins and being raised back to life, Jesus will be crowned as the King. Thus, the King is entering Jerusalem in much the same way as His ancestor did.

Notice that Jesus says if anyone should ask these disciples what they were doing that they should say, “The Lord has need of them.” This is the only place that Jesus speaks of Himself as “Lord.” This demonstrates that Jesus fully understood His identity and that He purposefully uses symbolism throughout this passage to point to His identity.

It had been prophesied in Zechariah 9 that the King would enter Jerusalem sitting on a donkey. That’s another piece of evidence that Jesus is the King, the Messiah.

The disciples “went and did as Jesus commanded them.” That’s evidence that they understood Jesus’ identity. You don’t do everything someone tells you to do unless he or she has authority to do so. There have been times I’ve been at the nursing home and someone who is no longer mentally competent has asked me to take him home. I’ve never thought about doing that–they were not mentally fit and had no authority. The disciples understand that’s not the case with Jesus, but that He has great authority.

Jesus rode on the donkey into Jerusalem. Actually, Jesus did not ride on the mother, but on the colt (Mk 11:2; Lk 19:30). The fact that Jesus is riding an unbroken animal seems to indicate that He is Lord over nature. He demonstrated that truth throughout His ministry–He turned water to wine, He healed the sick, He calmed the storm, and He multiplied fish and bread. But, think about what it means in this context–Not only does He reign over the kingdom of men, but He also reigns over the kingdom of nature.

The crowd put down garments in front of Jesus. This demonstrates that they regard him as the king. Notice that when Jehu was anointed king over Israel that “each man hastened to take his garment and put it under him on the top of the steps; and they blew trumpets, saying, ‘Jehu is king!’” (2 Ki 9:13).

The crowd cries out, “Hosanna to the Son of David!”

“Hosanna” means “Save us now!” You could make an argument that they did not fully understand Jesus’ identity, that they viewed Him as an earthly king who would sit on an earthly throne. I know that was the expectation in Jesus’ day and the Gospels allude to that expectation among the disciples and the general populace. But, I really doubt that’s what’s taking place in this moment in this text.

The language they use alludes to Jesus as the true Messiah: They ask the Lord to save them; They speak of Him as the Son of David, the Messiah; and They recognize that Jesus is coming in the name of the LORD. I believe, therefore, that for at least this brief moment that the people recognize Jesus as Lord and all that that means.

The whole city is in an uproar over Jesus, wondering who He might be. The answer comes back, “This is Jesus, the prophet from Nazareth of Galilee.” If the crowd really understood Jesus’ identity, this is further evidence of it. You remember that Moses promised that God would raise up another prophet from Israel’s midst to whom the people needed to listen (Deut 18:15).

You know that Jesus merits obedience. “Whoever hears these sayings of Mine, and does them, I will liken him to a wise man who built his house on the rock” (Matt 7:24). “Having been perfected, He became the author of eternal salvation to all who obey Him” (Heb 5:9).Often when I preach I’ll ask you to add one attribute to your life or to remove one thing from your life during the week. The reasoning is that growth as a Christian is a series of “baby steps”–we work on one thing and we move to the next. I really wouldn’t feel comfortable doing that with the commands of Jesus. I’m not going to say, “Pick one thing Jesus says to do and live that this week.” It does not work that way. Jesus Christ is King. We need to seek to obey every word He uttered and every word the Spirit Who testified of Him inspired.

How obedient are you to Jesus? Is He the King of your life? Do your thoughts and actions demonstrate that He has authority over your heart?

The crowd worshipped Jesus: “Those who followed cried out, saying: ‘Hosanna to the Son of David! “Blessed is He who comes in the name of the Lord!” Hosanna in the highest!’” (v 9).Throughout His earthly life, Jesus accepted worship. When the magi entered the house where the Christ Child was, they “fell down and worshiped Him” (Matt 2:11). When Jesus walked on water and calmed the storm, “those who were in the boat came and worshiped Him, saying, ‘Truly You are the Son of God’” (Matt 14:33). After the resurrection, Jesus’ disciples “came and held Him by the feet and worshiped Him” (Matt 28:9).

Jesus Christ, as King, merits your attendance at worship services. How much worship do you give the King? Are you as faithful in your worship attendance as you ought to be? When you attend worship, do you really worship? Do you concentrate on worshiping God, or is your mind on other things? Do you give your all to worship, or is worship really nothing more than an afterthought? Let us commit to proper worship of the King!

The crowd shouts “Hosanna to the Son of David!” (v 9). “Hosanna” is a Hebrew expression that Jews in Jesus’ day used as a greeting. “Hosanna” means “Save now!” And, Jews typically used the expression as wishing safety and wellbeing on someone.

But, I can’t help but wonder if the crowd here doesn’t understand that Jesus can save them, and they’re appealing to Him for salvation. Granted, the crowd may have been appealing for Jesus to save them from the Roman government. We know, however, that Jesus saves us from sin. “In [Jesus] we have redemption through His blood, the forgiveness of sins, according to the riches of His grace” (Eph 1:7). Jesus “became the author of eternal salvation to all who obey Him” (Heb 5:9). Have you been to Jesus to have your sins removed? Are you obeying the Son?

When the city asked Who was riding on the donkey and causing all the uproar, the multitudes said, “This is Jesus, the prophet from Nazareth of Galilee” (vv 10-11). The multitudes were sharing Jesus, telling others Who He is.

Are we willing to share Jesus? We must be. Jesus expects His people to share Him: “Go into all the world and preach the gospel to every creature” (Mk 16:15). Our first century brethren completed this task: Paul says that the gospel “was preached to every creature under heaven” (Col 1:23).With whom will you share Jesus this very week? Do you first need to come to Jesus and allow Him to save you from your sin? If you need to come to Jesus, won’t you come right now as we stand and sing?