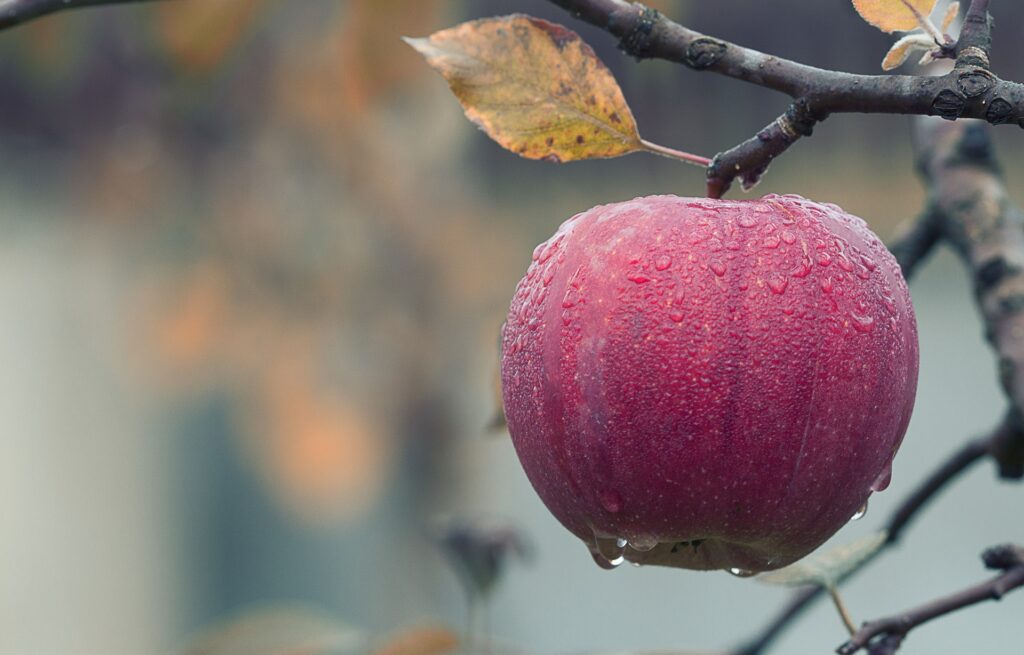 A few years ago, newspapers around the country carried the remarkable story of Al Johnson from Kansas. Mr. Johnson became a Christian. That fact wasn’t newsworthy, but as a result of his newfound obedience to Christ, he confessed to a bank robbery in which he had participated when he was just nineteen years old. Because the statute of limitations on the case had expired, Johnson could not be prosecuted for the offense. Still, he believed his relationship with Christ demanded a confession. And he even voluntarily repaid his share of the stolen money!

In this morning’s text, John calls the Pharisees and Sadducees to do the very same thing—to bear fruit worthy of repentance. John spoke of “fruit in keeping with repentance,” for his entire ministry was a ministry of repentance. “In those days John the Baptist came preaching in the wilderness of Judea, ‘Repent, for the kingdom of heaven is at hand’” (Matt 3:1-2). About his baptism, John declares, “I baptize you with water for repentance” (Matt 3:11).

John also urged the Pharisees and Sadducees to bear “fruit in keeping with repentance,” for they came to be baptized by him, but apparently they lacked any true repentance. Can you imagine what would happen if someone came forward to be baptized this morning and I yelled before the person could even get in the aisle: “Get back there! You don’t belong up here. You need to repent and then we’ll talk about baptism?” John seems to have had the ability, like Jesus, to be able to see a person’s heart. We modern preachers have no such ability. Therefore, John knew for a fact that these Pharisees and Sadducees had not repented. However, these are the upper class of Jewish society. Without any doubt, there was an uproar in these words of John.

I have no doubt but that the preaching of repentance caused an uproar. Preaching the need to repent almost always causes an uproar. Sometimes that uproar is quite positive: Jonah went and preached repentance to Nineveh. We then read: “The people of Nineveh believed God. They called for a fast and put on sackcloth, from the greatest of them to the least of them” (Jon 3:5). Sometimes that uproar is quite negative: John the Baptist experienced negative uproar because of his preaching. Herod had unlawfully taken Herodias, his sister-in-law, as his wife. John preached to Herod: “It is not lawful for you to have your brother’s wife” (Mk 6:18). John was, therefore, bound and placed in prison. Herodias never forgot John’s call for her husband to repent of his sin and when she found opportunity, she seized it and had John killed.

The preaching of repentance causes uproars, for repentance is difficult. Paul writes to the Corinthians: “Even if I made you grieve with my letter, I do not regret it—though I did regret it, for I see that that letter grieved you, though only for a while. As it is, I rejoice, not because you were grieved, but because you were grieved into repenting” (2 Cor 7:8-9). Because Paul speaks at verse 12 “of the one who did the wrong,” many scholars believe the specific grief and repentance here have to do with the man living with his step-mother. Whether or not that is the specific thing of which the Corinthians repented, notice that they were grieved. Because of our egos, it is not easy to hear that we are wrong. It is not easy to hear that we need to change.

We need A RUNNING FRUIT—a fruit that runs from the wrath to come.

In all likelihood, they come to John’s baptism in order to gain favor with the common Jew. Because they come to him with wrong motives, John says, “You brood of vipers! Who warned you to flee from the wrath to come?” You can almost hear the irony in John’s voice: “Well, I sure wasn’t expecting to see you folks here.” Calling the Pharisees and Sadducees a brood of vipers was a major insult. In the ancient world, people believed that vipers ate their way out of their mother, killing her in the process. John not only calls this crowd vipers, but he refers to their fathers that way, as well, for he calls them a “brood of vipers.”

John asks this brood of vipers an important question: “Who warned you to flee from the wrath to come?” With all the irony in this question, we dare not lose sight of two important points—One: There is a coming wrath; and Two: It is possible to escape—to run from—that wrath.

We know that God’s wrath is prepared to be unleashed upon this world and that those who have repented have escaped that wrath. In speaking of God’s judgment upon Rome, John records (Rev 9:13-15). Notice that the wrath of God was ready before that command—the axe was at the root of the tree—but, it was unleashed at the moment God had designated. God has great wrath that will one day be unleashed upon this world.

Those who have repented of their sins escape the wrath of God. To the house of Israel, the LORD says, “I have no pleasure in the death of anyone, declares the Lord GOD; so turn, and live” (Ezek 18:32). By turning from sin one may live. If the church at Ephesus repented, Jesus would not judge them: “Remember therefore from where you have fallen; repent, and do the works you did at first. If not, I will come to you and remove your lampstand from its place, unless you repent” (Rev 2:5).

Do you need to bear A RUNNING FRUIT this morning by repenting of sin and thus escaping the judgment of God?

“Bear fruit in keeping with repentance.”

The best illustration of what true repentance is comes from Luke 15, the Parable of the Prodigal Son (Lk 15:14-20a). The son had great grief: there was a severe famine in the land, the famine was so severe that he even wanted to eat the food he was giving the pigs. Then, according to Jesus, he decided to go back to his father. Then, he arose and went to his father. You have all three elements of repentance in that Parable: grief, a decision of the will, and the actions that come from that decision of the will.

The Pharisees and Sadducees needed to demonstrate through their lives that they had, in fact, repented of their sins. Likewise, our lives need to demonstrate a change in life. We need A REPENTING FRUIT. “Those who belong to Christ Jesus have crucified the flesh with its passions and desires” (Gal 5:24). “You have learned about him and were taught in him, as the truth is in Jesus, to put off your old self, which belongs to your former manner of life and is corrupt through deceitful desires, and to be renewed in the spirit of our minds, and to put on the new self, created after the likeness of God in true righteousness and holiness” (Eph 4:21-24).

Two fellows opened a butcher shop and did quit well for themselves. A local church was having a revival and one of the butchers became a Christian. The other butcher tried to persuade his partner to accept salvation also, but to no avail. “Why won’t you, Charlie?” asked the Christian. “Listen, Lester,” the other butcher said. “If I get religion, too, who’s going to weight the meat?” The butcher understood that repenting meant changing his life. Do we have A REPENTING FRUIT? Do we need to change our lives?

The fruit we are to bear is A ROLLING FRUIT—we have our own role in the bearing of the fruit.

John says, “‘Do not presume to say to yourselves, ‘We have Abraham as our father,’ for I tell you, God is able from these stones to raise up children from Abraham.” The Jews of John’s day took great pride in being children of Abraham: After Jesus had said that the truth would set the Jews free, they “answered him, ‘We are offspring of Abraham and have never been enslaved to anyone” (Jn 8:33). Furthermore, their descent from Abraham caused the Jews to believe that they were saved from God’s wrath. For the Jews, salvation was quite like the reign of Queen Elizabeth II. Because she was born of the right pedigree, the elder daughter of a King of the United Kingdom, she became the Queen upon her father’s death. Her birth to the right parents was all it took for her to become Queen. The Jews really and truly believed salvation worked in exactly the same way. Their only part in the entire process was being born children of Abraham.

But, John says, “Don’t say that you are Abraham’s children, for God can take these stones and turn them into children of Abraham.” Such a statement would have sounded to John’s audience like pagan mythology. The Greeks had a myth about a god turning stones into people. But, for the God who made man out of dust could surely make children of Abraham out of stones. I’m confident that he could even have infused them with Jewish DNA, if need be. The point is that the Jews’ ancestry from Abraham wasn’t really all that special. God had taken Abraham and made the Jews from him, but he could have done the same thing with a bunch of rocks.

The Jews to whom John was speaking had a role to play in their own salvation—they could not claim righteousness on the basis of their genealogy. Righteousness has never been based on Mommy and Daddy. “The son shall not suffer for the iniquity of the father, nor the father suffer for the iniquity of the son. The righteousness of the righteous shall be upon himself, and the wickedness of the wicked shall be upon himself” (Ezek 18:20). “Each of us will give an account of himself to God” (Rom 14:12).

I’m afraid that too often we believe we can obtain salvation simply based on our ancestry. How many people have sincerely said, “If this was good enough for Mommy and Daddy, it’s good enough for me”? How many others have accepted what Mommy and Daddy said without the slightest examination? How many of us believe we might just be saved on the basis of a good pedigree? You might scoff at such a suggestion and declare, “We know better. We’d never think such!” Really? Have we ever thought that because we went to the Alum Creek Church of Christ we were going to be saved? “We do things down here like the Bible says: We have men who lead the worship, we take the Lord’s Supper every first day of the week, and we baptize for the remission of sins.” Don’t misunderstand me: those things are important. But, simply sitting in a building where those things take place isn’t going to get me to heaven! I fear that too often we have believed simply being a member of the church was enough to save us. I don’t need to worry about righteousness—I don’t need to worry about my daily walk with God—I don’t need to worry about loving my neighbor as myself.

Some might think it odd that I’ve preached a sermon such as this this morning with but a scant mention or two of baptism. The reasons for that are twofold:

Have you repented of your sins? Have you been baptized into Christ?