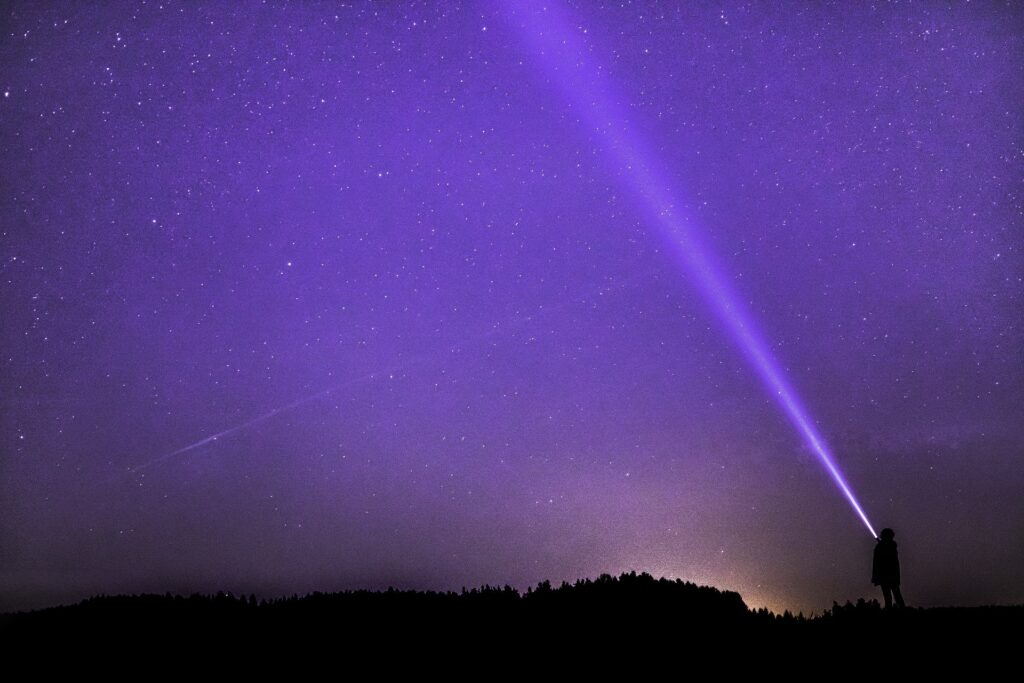 In the days before electricity, a tightfisted old farmer was taking his hired man to task for carrying a lighted lantern when he went to call on his girl. The farmer said, “When I went a-courtin’ I never carried one of them things. I always went in the dark.” “Yes,” said the hired man, “and look at what you got!”

There are certainly times that we need a light. Would any of us want to drive after dark without our headlights? My mom would often rearrange the furniture after everyone was in bed. Dad had to get up for work at 4:00 am. He always made sure that he turned the lights on before he walked through the living room, lest Mom had rearranged the furniture and he fall over something.

As “THE GREAT LIGHT” Jesus moved from Nazareth to Capernaum. Nazareth was a small agricultural village and Capernaum was a larger fishing town on the northwest edge of the Sea of Galilee. Jesus moves from a small community to a larger town. Obviously, there are going to be far more opportunities to preach. God cares deeply about souls. It is he, after all, who gave his Son to die for the sins of the entire world. While the souls in Nazareth were just as important as those in Capernaum, Jesus’ ministry in a larger town will provide more people with an opportunity to hear the truth.

It’s certainly also possible that Capernaum was chosen because it was the hometown of Peter (Mk 1:29). Peter becomes a very important Apostle-Jesus gave to him the keys of the kingdom and throughout Acts, Peter serves as the spokesman for the Twelve. Therefore, it’s very possible that God providentially led his Son to Capernaum so that he could train this important disciple for his coming task.

Matthew informs us that it was after Jesus heard that John had been arrested that he moved from Nazareth to Capernaum. Only Matthew tells us that it was after John’s arrest that Jesus moved from Nazareth to Capernaum. The timing of Jesus’ move seems to be quite important. Were it not important, would the Spirit have even had Matthew pen those words?

Why did the Lord take up his cousin’s unfinished ministry? Ministry is never about a single person; John came and pointed the way to Jesus, but John’s preaching wasn’t about John. Thus, fulfilling a ministry is a team effort. It was in Corinth: 1 Corinthians 3:5-8. It was in Samaria. Philip preached in Samaria and many were baptized (Acts 8:12). Yet, because he was not an apostle, Philip could not give the brethren there the miraculous measure of the Spirit to establish them in the faith; therefore Peter and John went to Samaria and bestowed upon them miraculous gifts (Acts 8:14-17).

Ministry today continues to be a team effort. That was the point Paul made to the Corinthians about their different gifts. Remember that the Corinthians were bickering over whose gift was better. 1 Corinthians 12:24b-25-only by ministering together could the Corinthians be a complete body. Philippians 1:27. Are we working together-striving side by side-for the glory of God?

Luke informs us of yet another reason that Jesus moved from Nazareth to Capernaum: He was rejected at Nazareth (Lk 4:28-30). Imagine that audacity for just a moment-here is the Son of God and he’s driven out of his hometown because what he says doesn’t sit well. The words of Jesus were often rejected. When Jesus said that he was the true bread from heaven, we read these words at John 6:66. After Jesus told the rich young ruler to sell all he had and follow him, “he went away sorrowful, for he had great possessions” (Matt 19:22). We, like those in the synagogue at Nazareth, can drive Jesus out of our lives because what he says is difficult. Shall we reject the Christ?

Matthew doesn’t just tell us that THE GREAT LIGHT moved from Nazareth to Capernaum; he also informs us that he moved to the territory of Zebulun and Naphtali. Actually, Capernaum was within the borders of Naphtali, but it was not in the territory of Zebulun. But, Matthew says that Jesus lived in the territory of Zebulun and Naphtali, but Jesus did not live in Zebulun. Why would Matthew make a geographical mistake? Obviously, I do not believe for a second that Matthew made a geographical mistake, but I do believe this is important to notice or I wouldn’t mention it. I don’t even believe that Matthew is speaking of geography. He quotes from Isaiah 9 which lumps Zebulun and Naphtali together. Isaiah lumps the two territories together as the “Galilee of the nations.” Matthew says that Jesus metaphorically lived in these two territories, for it was from the “Galilee of the nations” that Jesus began his ministry to all people.

From Isaiah 9:1, Matthew refers to Zebulun and Naphtali as the “Galilee of the Gentiles.” Zebulun and Naphtali lay on the northern border of the Promised Land; therefore, when aggressors came from the north, these territories were attacked before the rest of the land. Additionally, many Egyptians, Arabians, and Phoenicians lived in this territory. Capernaum was located on one of the major trade routes of Palestine; thus, many Gentiles would be coming and going through this region. While Jesus ministered almost exclusively to the Jews, his ministry in Capernaum did provide opportunities to minister to Gentiles. In Capernaum, Jesus healed the servant of a centurion (Matt 8:5-13). When Jesus went to Tyre and Sidon, he healed the daughter of a Canaanite woman (Matt 15:21-28).

The point of all this is that Jesus came to the Gentiles as well as the Jews. While Jesus himself never spent a great deal of time with Gentiles, he taught his disciples to minister to all people. Matthew 28:19a. Luke 24:46-47. Acts 1:8b.

What great news for us! You and I-who did not descend from Abraham-have an opportunity to come to salvation through the Christ. All people, regardless of their pedigree, can have their sins cleansed by the Son of God who came to save the world.

Not only does Jesus’ moving to Capernaum foreshadow the ministry to the Gentiles, but it also demonstrates that “the people dwelling in darkness have seen a great light, and for those dwelling in the region and shadow of death, on them a light has dawned.” The metaphor of darkness in Scripture is used to illustrate several truths.

As the light, Jesus stands as the remedy of those three problems.

Jesus has provided light to those dwelling in the region and shadow of death. Before Jesus, death was viewed as a shadowy, dark realm where there was no light whatsoever (Job 10:20-22). Yet, the Lord Jesus has revealed death quite differently. For example, in speaking of the rich man and Lazarus, Jesus revealed the realm of the dead righteous as a place of comfort (Lk 16:25). It is Jesus who has removed the fear of death: Hebrews 2:15.

A preacher was driving with his children to his wife’s funeral where he was to preach the sermon. They came to a red light and in front of them was a huge truck. The sun was shining on it at just the right angle that the truck’s shadow spread out across the snow on the field beside it. The preacher said, “Look children at that truck, and look at its shadow. If you had to be run over, which would you rather be run over by? Would you rather be run over by the truck or the shadow?” The youngest child said, “The shadow couldn’t hurt anybody.” “That’s right,” the preacher continued, “and death is a truck, but the shadow is all that ever touches the Christian. The truck ran over the Lord Jesus. Only the shadow is gone over Mother.”

But, that is only the case because Jesus is a MULTINATIONAL LIGHT-a light to Jews and Gentiles.

Jesus was a light on a mission. You don’t turn the lights on in your home for just any cause, but you have a purpose-a mission-you want the light to perform: to light a room so that you can see in that room. Jesus was on a mission: “From that time Jesus began to preach, saying, ‘Repent, for the kingdom of heaven is at hand.’”

In his mission, Jesus calls people to repentance. There is a great need for repentance: Without repentance, we shall perish: Luke 13:3. As we have said before, repentance leads one to a new life. Jesus is calling those in Capernaum to a new life in him.

However, I believe there is an important distinction between the church and the kingdom. The church is a physical reality, while the kingdom is a spiritual reality. The kingdom of God refers to the reign of God: Revelation 11:15. Thus, being a part of God’s kingdom means that I allow God to reign in my life, that I allow him to be my Sovereign, and that I make him first. I have no doubt but that everywhere the church meets this morning, there are people who have their names on the “church roll,” but aren’t part of the kingdom. These people might attend every church service, they might teach class, and they might serve in a variety of ways. Yet, they are not really a part of either the church or the kingdom, for God does not reign in their lives.

Let me give you an illustration. Simon Cowell is a citizen of the United Kingdom. But, if he fails to obey the laws that Queen Elizabeth has given her consent to, he isn’t allowing her to reign in his life. Yes, I know that’s a far from perfect illustration, but it does demonstrate that in a kingdom that King or Queen reigns. Are you this morning allowing the Lord of the Universe to reign in your life?