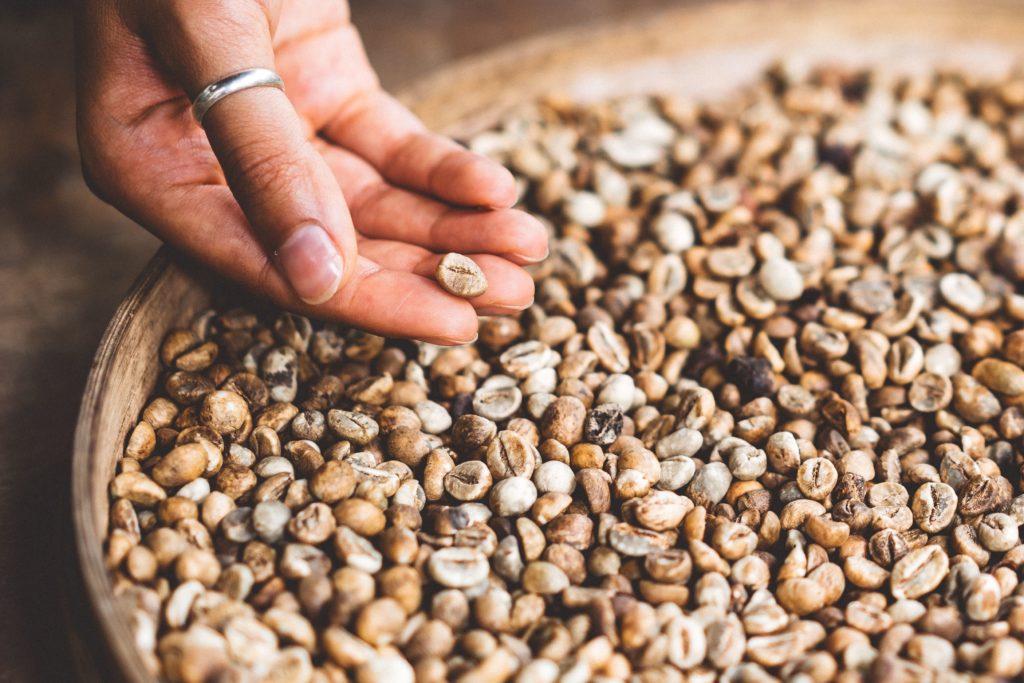 I’ve never been much of a gardener. Last year I had taken such good care of my tomato plants—I started these plants from seeds, and I was so proud of how well they’d done. One morning, as I was getting in the car to come to the office, I noticed that deer had eaten everything—the juicy, plump green tomatoes—and they had eaten my plants down to the ground. I was really tempted to go deer hunting so I could eat my tomatoes, one way or the other.

But my Papaw Lee could grow anything. About half of his relatively large backyard was nothing but a big garden. Mom and Dad raised a garden a year or two when I was little, but they stopped because Papaw had so much surplus. Nannie and Papaw kept a wrought iron picnic table on their carport. That thing would be full of tomatoes, sometimes two or three deep.

They couldn’t give to us or to people at church or to neighbors fast enough to keep ahead of what was coming out of the garden—peas, green onions, tomatoes, cabbage, lettuce, corn, green beans. Tammy will tell you that when she fixes canned green beans from the store, she doesn’t need to ask if I’m gonna have any. I really despise them. By the same token, when we get some at the farmer’s market that are just fresh out of the garden, she doesn’t need to ask if I’ll have any. I can eat my weight in them. I was raised on fresh vegetables, and I love them to this day.

I know I’m talking to folks who love to garden. Last year Nick took me and showed me his nice garden. Judy and Jan do a nice job taking care of the flower gardens outside and helping to keep things trimmed and looking nicely. Nadine has her own greenhouse. Many others of you love to garden in one way or another.

Regardless if you’re growing vegetables or flowers, there is one constant in gardening: You’ve got to plant.

Jesus, in this morning’s text, speaks about a man who goes out to sow. The fact that Jesus even talks about a farmer is quite interesting. Of course, most folks in the Roman Empire were rural peasant farmers. However, the literate elite typically ignored this large part of the population. Yet, the fact that Jesus has such great knowledge about their lifestyle demonstrates that He routinely ministered among them.

Jesus teaches a parable to the great multitudes. Then, when the disciples come to Him, He explains to them fully what this parable means. As Jesus explains the meaning of the parable, one fact becomes unmistakable: “Different hearts bring about different harvests.”

“On the same day.” As I’ve said before, a good bit of the Gospels is not in chronological order. In the days of the apostles, you wrote a biography and grouped the material thematically. So, when Scripture gives us a chronological clue, we need to sit up and take notice.

Jesus taught the Parable of the Sower “on the same day” when, at least some, events in chapter 12 took place. Chapter 12 is all about the Pharisees’ rejection of Jesus’ Messiahship. Jesus failed to live up to their expectations concerning the Sabbath—the disciples pluck grain and the Lord Himself heals a man on the Sabbath (12:1-13). The Pharisees “went out and plotted against Him, how they might destroy Him” (12:14). The Pharisees blasphemed the Holy Spirit (12:24-37). The scribes and Pharisees asked to see a sign from Jesus (12:38-45). The ones who are Jesus’ family are those who do the will of God, contra the Pharisees (12:49-50).

Therefore, the Parable of the Sower is told in response to the Pharisees, and I’m fairly certain the first soil type is talking about the Pharisees.

The emphasis in this parable really isn’t the sower; the emphasis is really on the four different soil types.

However, I want you to notice something: The only way the sower could scatter seed on these four different soil types is if he sowed seed before he plowed. Not always, but usually, farmers sowed before they plowed; therefore, the seed would end up with fates as described right here in the text.

Some seed fell on the wayside, and the birds came and devoured it.

Instead of allowing these folks to understand, the “wicked one” comes and takes the seed away. Notice that the taking away of the seed is the work of Satan who has been deceiving and beguiling folks since the Garden of Eden.

Some seed fell on stony places, but could not put down roots, so they withered away. Much of the soil in Palestine is just a thin layer of soil on top of rock. Unless he plowed first—which, as we’ve already mentioned, is unlikely—the sower wouldn’t know he sowed on rock until after the fact.

This person receives the word with joy, but he quickly falls away. You’ve known the type—they’re very excited to be a Christian, but it doesn’t take long until you never see them again.

These folks quickly fall away when tribulation or persecution arises because of the word. In the early days of the church, it was very, very common for folks to fall away in the midst of severe persecution. Yet today in the United States, people still fall away because of persecution—snide remarks, discouragement from family, the rudeness of an employer all cause folks without roots to fall away.

Some fell among thorns and was choked. Again, the thorns would not be visible when the sowing was done. The previous year’s thorns would have been cut or burned, but their roots would allow them to spring up against this year.

This soil stands for the person who allows the cares of this world and the deceitfulness of riches choke out the word. These are folks who cannot see eternity for the here-and-now. There are many examples of this attitude in Scripture. The rich young ruler would not part with his great wealth to follow Jesus. Herod, when Herodias’ daughter danced before him, became so full of worldly desires that he offered her whatever she wished.

The good soil yielded a crop: some a hundred-fold, some sixty, some thirty. The numbers Jesus mentions here aren’t supernatural numbers—they did occur; you could plant one seed and get 100 seeds in return. However, the most common harvest was about ten-fold, ten seeds for every seed planted.

This is the person, Jesus says, who brings forth fruit for God.

“Different hearts bring about different harvests.” How do we go about applying that truth to our lives?

I think there’s a lesson in evangelism here, and that is to keep sowing. The farmer wasn’t concerned with what seed fell where; rather, he continued to sow seed in order to have a good harvest. Like the farmer, we may not understand what type of soil where we’re sowing onto until it comes time for harvest. Therefore, we do not become discouraged; we continue to sow.

But I think there are two much more pressing matters as we go to the text.

One: Determine what type of soil you are.

You might think I’m crazy for saying that. You might say: “We’ve been going to church for 25 years. We’ve all been baptized. We teach class. We send cards. We’re actively bringing forth fruit.”

However, there are people who do what is culturally acceptable, whether that thing be right or wrong. Do you remember when Pilate washed his hands? He wanted to let Jesus go, but he did what pleased the crowd. Do you remember when Peter was in Antioch and he refused to eat with the Gentiles once the men from James arrived?

Could it really be that some of us are Christians and active in the church only because it’s expected of us? We do it to please Mom and Dad or husband/wife simply to keep peace.

Might you be the wayside soil? Do you understand the word? Do you believe the word? Could it be that way down in our heart of hearts you really don’t even want to believe?

Might you be the stony ground? Do you have roots? Could you withstand persecution on account of the word?

Might you be the thorny soil? Do the things of this world have such an attraction to you that you cannot let them go?

Could it be that you are through and through the good soil, bringing forth fruit to the Master by the way that you live?

Get off to yourself sometime this week and be brutally honest with yourself. What type of soil are you?

Following the first century parable to its fullest conclusion, it would be possible for the farmer to have all good soil. If he had plowed, he wouldn’t have had that hard soil on the wayside, he could have gotten the stones out of the stony soil, and he could have pulled up all the roots from the thorns.

I don’t know that people can change soil types apart from God. “I planted, Apollos watered, but God gave the increase” (1 Cor 3:6). Therefore, we’re going to spend a good bit of time relying on God and asking for His help.

Are you the wayside soil?

I would imagine that there aren’t many “wayside” folks in worship at all this morning, here or anywhere else.

But, maybe you’re concerned that you’re on your way to become the “wayside.” Do two things:

Because the wayside soil has to do with not understanding the word, you’ll pray for understanding: “If any of you lacks wisdom, let him ask of God, who gives to all liberally and without reproach, and it will be given to him” (Js 1:5). You’ll pray for God to break your heart, to mold it into the image of His Son.

Spend time in the Word.

Spending time in the Word will increase your faith. “Faith comes by hearing, and hearing by the word of God” (Rom 10:17).

Are you the stony soil?

Do you honestly believe you’d be able to withstand persecution? If you’re concerned about that, do two things:

Read about those who looked persecution right in the eye and persevered.

Meditate on Daniel’s courage to pray; or Shadrach, Meshach, and Abednego’s desire to die in a fiery furnace rather than to bow the knee to Nebuchadnezzar’s golden image; or Stephen’s heroic and fiery sermon that caused him to be stoned. Go outside of biblical sources and read Foxe’s Book of Martyrs to see how our early brethren faced death instead of pledging allegiance to Caesar.

Remember the boundless and great promises of God.

Are you thorny soil?

Give up some pleasure. Go ahead and make it a small pleasure with the idea of giving up even more pleasure in the future. That idea is straight from Jesus: Matthew 5:29-30.

If money is keeping you from following Jesus, you need to be a generous giver. How much should you give? That’s up to you, but Jesus urges you to give a lot. Jesus to the rich young ruler: “One thing you lack: Go your way, sell whatever you have and give to the poor, and you will have treasure in heaven; and come, take up the cross, and follow Me” (Mk 10:21).

Are you good soil?

If you’re really good soil, keep on keeping on. Continue to bear fruit for our Lord and Master. “Let us not grow weary while doing good, for in due season we shall reap if we do not lose heart” (Gal 6:9). Do you need to come to Jesus and begin bearing good fruit this morning?